A British mother has been slammed after revealing she is angry at her maid-of-honour for getting engaged ahead of her wedding.

The unnamed woman took to Mumsnet to vent her frustration at her best friend for ‘stealing her thunder’, but was met with criticism from other users.

Explaining that she only has three months left until she marries in November, the woman admitted she was worried her pal’s focus would no longer be on her role as a bridesmaid.

Delving deeper into the issue, the mum then explained she felt as though her friend always ‘swoops in’ on everything she does, before questioning how genuine her recent engagement was. 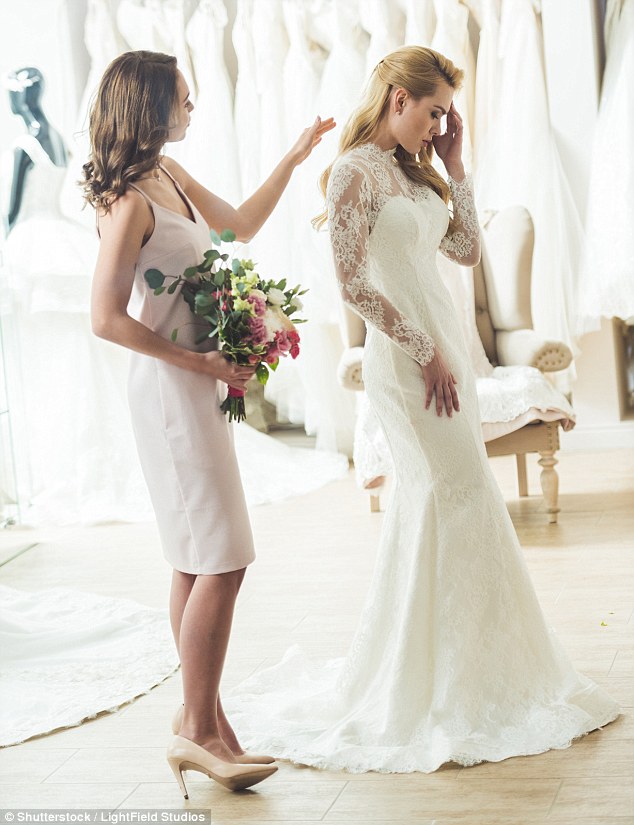 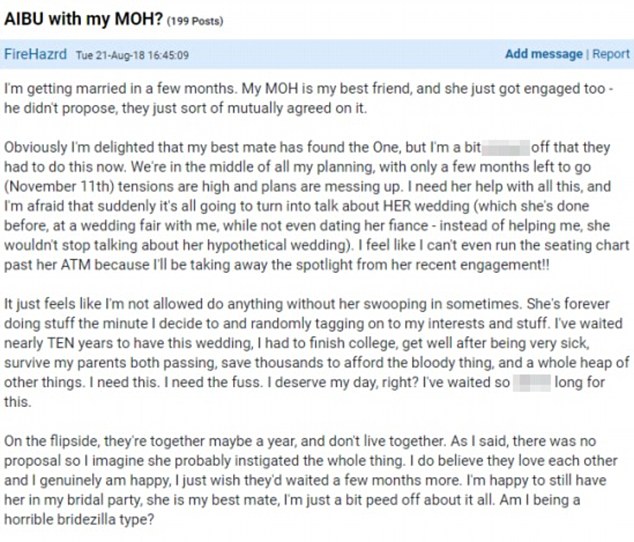 The unnamed woman took to Mumsnet to vent her frustration at her best friend for ‘stealing her thunder’, but was met with criticism from other users

Kicking off the lively thread, the woman wrote: ‘I’m getting married in a few months. My maid of honour is my best friend, and she just got engaged too – he didn’t propose, they just sort of mutually agreed on it.’

Claiming that she was happy for her pal, she continued: ‘ Obviously I’m delighted that my best mate has found the One, but I’m a bit p***ed off that they had to do this now. ‘

Explaining that the wedding is taking place on November 11th, she said: ‘Tensions are high and plans are messing up. I need her help with all this, and I’m afraid that suddenly it’s all going to turn into talk about her wedding’.

And recalling how her pal ‘couldn’t stop talking about her hypothetical wedding’ during a previous wedding fair, she added: ‘I feel like I can’t even run the seating chart past her ATM because I’ll be taking away the spotlight from her recent engagement!’. ‘One doesn’t outdo the other!’ Users quickly flooded the post with comments slamming the bride’s behaviour and accusing her of being a bad friend

The woman went onto accuse her pal of continuously copying her interests, before revealing that she had waited an extremely stressful ten years for her wedding, adding: ‘I need this. I need the fuss. I deserve my day, right? I’ve waited so d**n long for this.’

Adding that her friend had ‘only’ been with her fiance for a year and they didn’t even live together, she added: ‘I do believe they love each other and I genuinely am happy, I just wish they’d waited a few months more.’

She asked: ‘I’m happy to still have her in my bridal party, she is my best mate, I’m just a bit peed off about it all. Am I being a horrible bridezilla type?’ 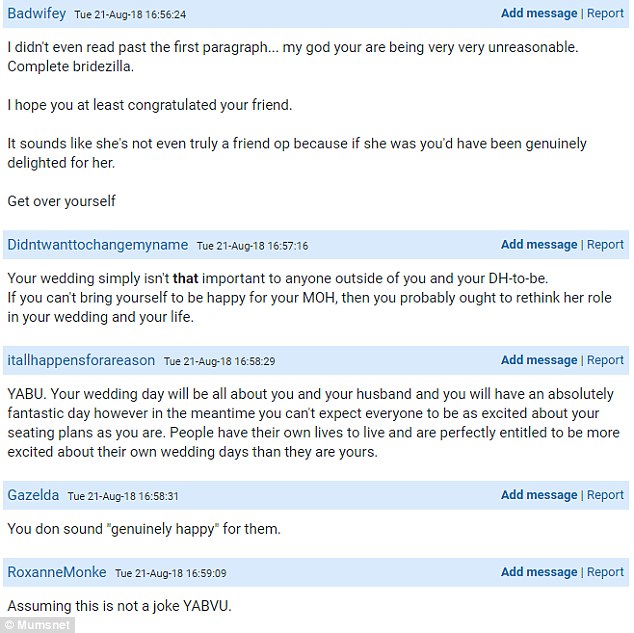 Accusing the British bride-to-be of acting like a ‘jealous child’ over her pal’s announcement, one replied: ‘You sound like a jealous 7-year-old. Grow up

And users quickly flooded the post with comments slamming her behaviour and accusing her of being a bad friend.

Accusing her of acting like a ‘jealous child’, one replied: ‘You sound like a jealous 7-year-old. Grow up.

‘Come November 12th nobody you’re going to have to find a new hobby. Oh and your suggestion that her relationship is inferior because she didn’t get, or possibly want,a showy proposal is just mean. I’m 22 years in to my no proposal, no wedding marriage! Stop being a b**h and go back to your napkins.’

Suggesting she take an interest in her pal’s engagement, another less outspoken mother replied: ‘I’m afraid you are being unreasonable!

‘My maid of honour wasn’t involved so much in the planning. I wouldn’t have expected her to look at a seating plan tbh, she didn’t know half the people anyway! Why can’t you talk about both?’ 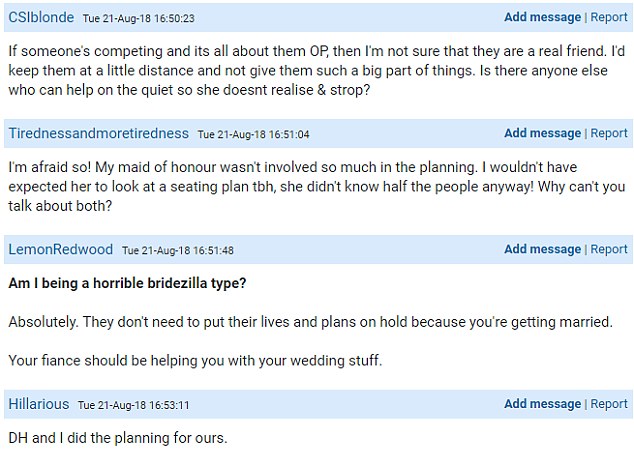 Suggesting the bride-to-be take an interest in her pal’s engagement, another less outspoken mother replied: ‘I’m afraid you are (being unreasonable)!

Agreeing that she was being unreasonable, another added: ‘Absolutely. They don’t need to put their lives and plans on hold because you’re getting married. Your fiance should be helping you with your wedding stuff.’

And attempting to put things into perspective for the angry bride, one answered: ‘It’s easy to get caught up with weddings and think that others are being unreasonable or selfish but other people have lives of their own.

‘At the end of the day it’s your wedding and although it maybe nice if they lend you a hand you shouldn’t be expecting anyone but you and your DP (dear partner) to put the work in!’

They added: ‘You don’t need to run a seating chart by her she’s unlikely to care if your aunt sits next to cousin Barry!’

Another shocked user added: ‘I didn’t even read past the first paragraph… my god your are being very very unreasonable. Complete bridezilla. I hope you at least congratulated your friend.’

Others questioned how genuine their friendship was if they constantly found themselves competing. 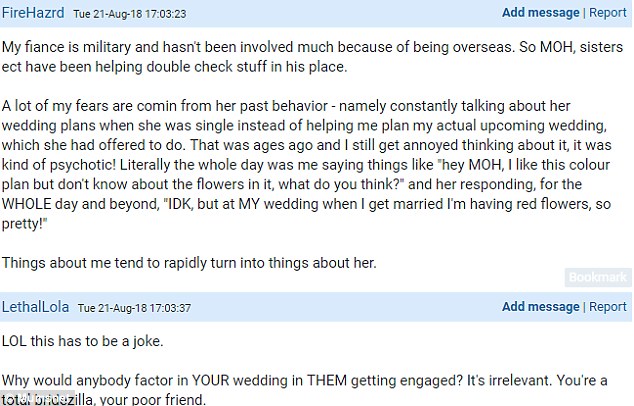 The bride attempted to explain when the pals had clashed in the past, accusing her of always ‘making it about her’, but her protests were quickly branded ‘a joke’

One wrote: ‘It sounds like she’s not even truly a friend op because if she was you’d have been genuinely delighted for her. Get over yourself!’

And many more defended the pal, with one questioning: ‘Why would anybody factor in your wedding in them getting engaged? It’s irrelevant. You’re a total bridezilla, your poor friend.’

Defending the pal’s relationship, a final user wrote: ‘It’s interesting that in talking about your big day and what you deserve and blah blah blah you never once mention your husband to be. Comes across as very shallow like you just want your big day and the groom is just a co-star.

‘Not everyone likes ‘shacking up’ before marriage and I can assure you that you can be engaged and married without a proposal.’