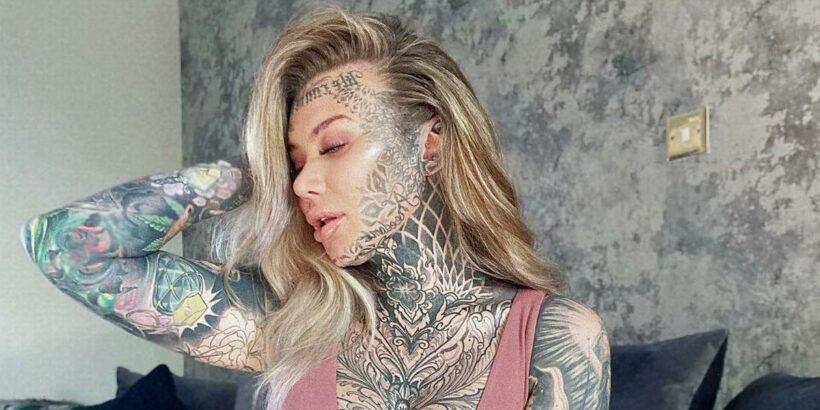 "Britain's most inked woman" turned into a "tattooed Barbie" as she slipped into super sexy pink lingerie.

Becky Holt, AKA 'Britain's most tattooed woman', is known for flaunting her tattoos.

In a recent saucy snap she showed off her amazing inks by slipping into some super saucy pink undies.

Back in October the blonde beauty opened up about how much money she's splurged on inking her skin.

She was just 15 when she first went under the needle, and she's been at it ever since.

At the time the 34-year-old, from Cheshire, admitted her passion hasn't come cheap.

While some may think this is a "waste of money", Becky revealed tattoos have been well worth the investment.

In fact, her tattoos are so good she simply has to show them off, and that's exactly what she did in her recent Instagram picture.

The blonde babe posed wearing nothing other than lacy pink lingerie, and she called herself "tattooed Barbs" due to the bold colour of the undies.

As well as showing off her amazing bod, the set also worked to flaunt her inks to the max.

You can see the intricate designs stretch from her neck all the way down to her toes.

Since she shared the sizzling snap more than 4,000 people have liked it, and dozens of people also commented.

People were keen to find out how she looks after her inks, and wanted to tell Becky how amazing they think she is.

Another added: "Love your neck tattoo."

A fourth also chirped in: "So truly beautiful."