Britain’s oldest identical twins, 96, leave this Morning viewers in ‘hysterics’ as one reveals she turned down a proposal because she wants ‘an old man, about 98, with six months to live and a big fat cheque book’

This Morning viewers were left in hysterics when one of Britain’s oldest twins revealed she had received a proposal – but turned it down because she wants ‘an old man, about 98, with about six months to live and a big fat cheque book.’

Doris Hobday and Lil Cox, 96, from Birmingham, appeared on Good Morning Britain in May, where they had hosts Piers Morgan and Susanna Reid in peals of laughter as they chatted about how they were finding lockdown, joked that the secret to longlife was ‘plenty of sex’ and also admitted to a crush on Jason Statham.

Appearing on This Morning today, they offered an update on their lives and revealed that while they still haven’t heard from Jason Statham, Lillian has since received a proposal from a man called Desmond.

‘No, I don’t want him. I’d rather have Jason. I want an old man about 98, with about six months to live and a big fat cheque book,’ she said, to which Doris added: ‘As long as he’s got time to put it into her name.’ 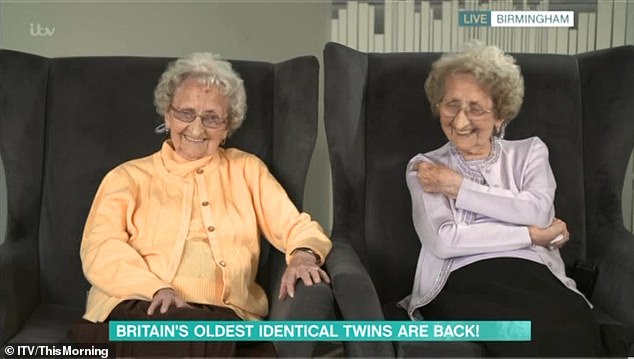 Lil Cox, 96, from Birmingham, appeared on This Morning with twin sister Doris, and told she turned down a proposal because she wants ‘an old man, about 98, with about six months to live and a big fat cheque book.’ Pictured, together

One This Morning viewer took to Twitter and penned: ‘Never laughed so loud to myself’  (pictured) 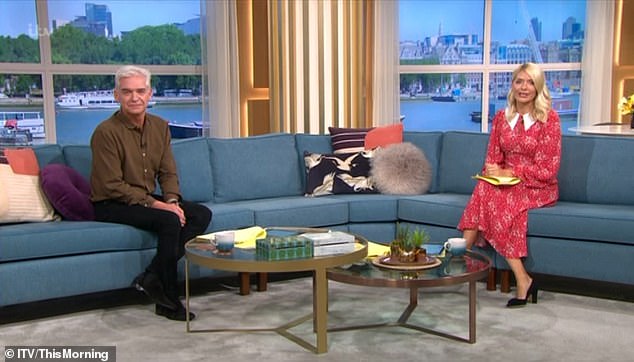 When Holly asked how the pair have both been, they admitted lockdown was ‘terrible’ and ‘didn’t do a lot’ to celebrate their birthday. Pictured, with  Phillip Schofield

And it wasn’t long before those who tuned in took to Twitter to comment on the pair’s witty remarks.

‘Omg “not long to love and a big fat cheque book” never laughed so loud by myself. The twins are just lovely,’ wrote one, while a second penned: ‘Desmond she want’s an old rich fella.’

When the duo previously appeared on This Morning, they left the nation laughing after admitting they sometimes wear their drawers inside out.

But this time round, Lillian revealed to Phillip she ‘aint’ got none on.’ 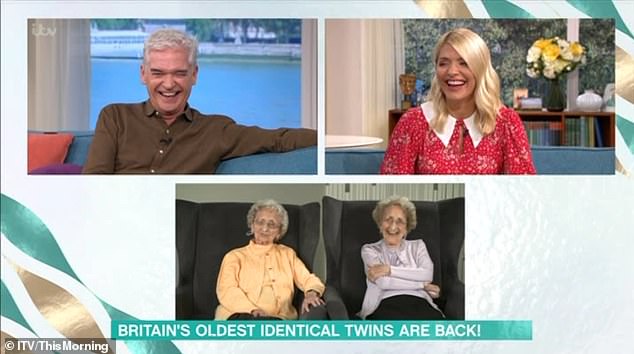 Doris and Lil admitted they had been asked to appear on Naked Attraction, but didn’t want to see ‘dangling bits’.’ Pictured, with Holly and Phillip 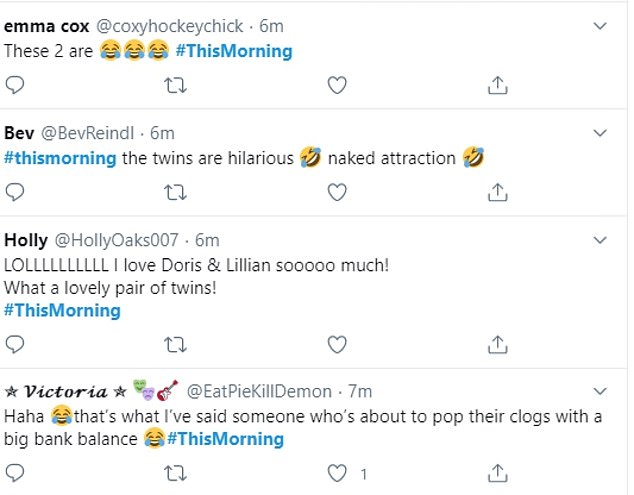 However, when Holly asked how they’ve both been, they admitted lockdown was ‘terrible’ and ‘didn’t do a lot’ to celebrate their birthday.

‘Boring to bits,’ Doris explained. ‘Bored to tears. We’ve been stuck in the flat. We amused ourselves by watching you every morning,’ to which Holly joked: ‘I hope that wasn’t the boring bit.’

Phillip went on to say the pair had been spending a lot of their time turning down offers to appear on a selection of popular TV shows.

‘They want me to go on Naked attraction,’ said Lillian. ‘They’re not having me watching those dangling things.’

Doris chimed in: ‘Well you’re ready. You’ve got none on now!’

However, while Lillian had never seen the show, Doris admitted she had watched it before because she was ‘inquisitive’ – but hadn’t tuned in since.

Holly also said that The Circle had approached them, with the pair adding they’d like to appear on Gogglebox.

Following the amusing segment, the twins. who have become local celebrities, won over a legion of fans on social media.

‘Britains oldest identical twins from Birmingham are just hilarious,’ enthused one, while a second penned: ‘What a lovely pair of twins!’

A third added: ‘Would love to see The twins on #gogglebox they would be amazing,’ while a fourth commented: ‘LOLLLLLLLLLL I love Doris & Lillian sooooo much!’