A burns survivor who escaped from a blazing barn reveals how she underwent more than 100 surgeries to overcome her injuries.

Hayley Doyle, 32, of Rochdale, Greater Manchester, was just 14 when a hay barn she was playing in with friends was set alight, trapping the children inside.

The teenager suffered extensive burns to her hands, face, neck and wrists after putting herself in danger in order to push a friend out of the barn to safety.

Over the next 15 years Hayley, an IT reference specialist, underwent skin grafts and laser treatment to help repair her painful and damaged skin.

Now, more than a decade later, Hayley has turned her attention to helping fellow burns victims. Today: Burns survivor Hayley Doyle, pictured today, of Rochdale, Greater Manchester, was just 14 when the hay barn she was playing in with friends was set alight 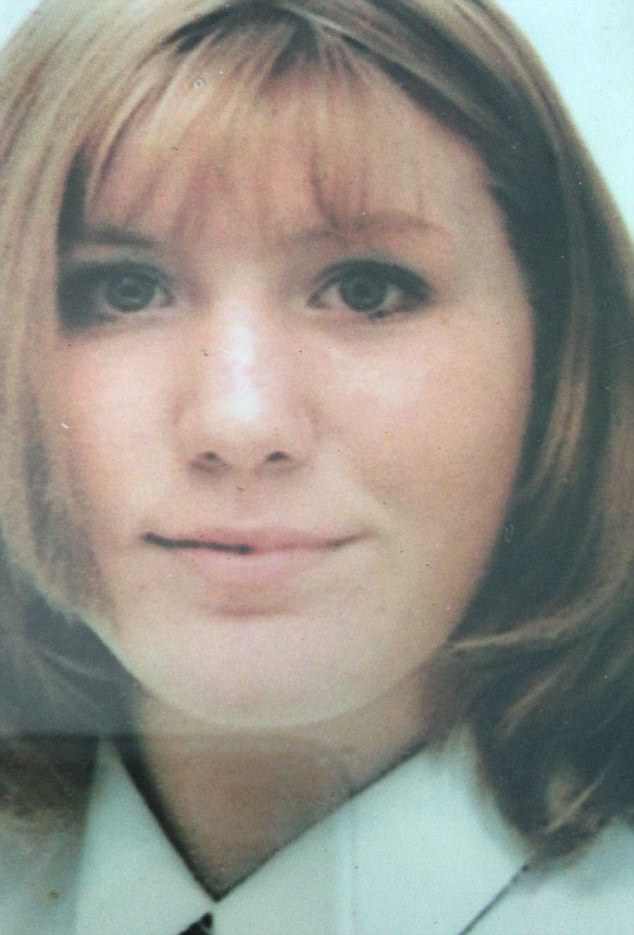 Then: Burns survivor Hayley Doyle, pictured as a teenager before the 2000 barn blaze 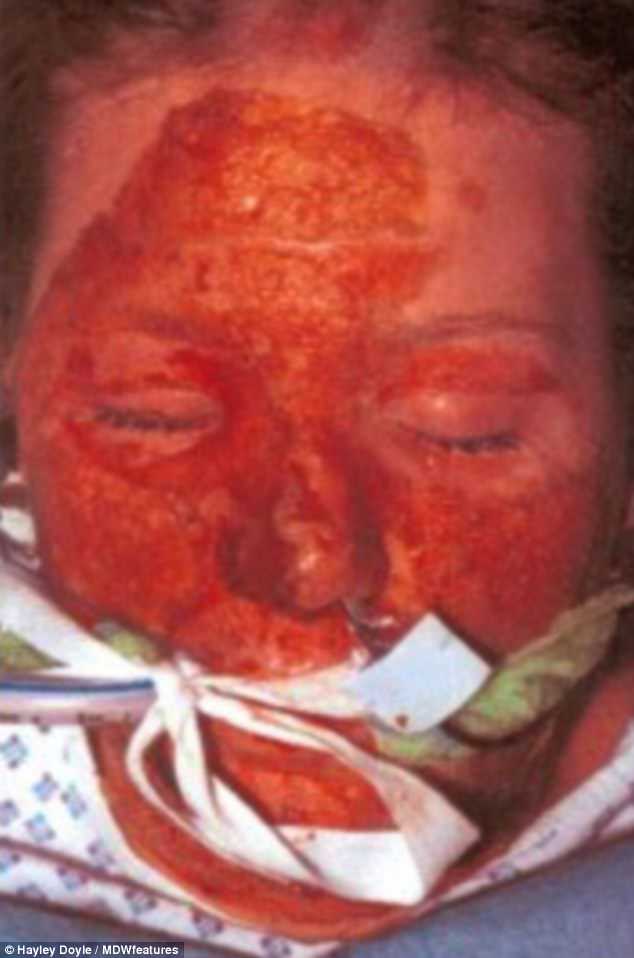 Horrific: The teenager suffered extensive burns to her hands, face, neck and wrists and eventually underwent more than 100 surgeries to treat her injuries

She said: ‘To this day we don’t know how I got through it. I had to crawl 10m and drop 15m – it was a massive inferno spreading and I could hear people telling me to jump. I just jumped, ran out and everything was completely ablaze.

‘I was completely on fire from head to toe, somebody grabbed hold of me and threw me in the horse water trough.

‘I thought it was straw; but it was my skin coming off like string in my hands. I kept going on about my face and a woman said, “no your face is fine” and she took me to her car. It was awful.

‘Luckily I couldn’t see very much because my face was swelling so much that my eyes were basically closed; she opened the mirror and showed me my face. 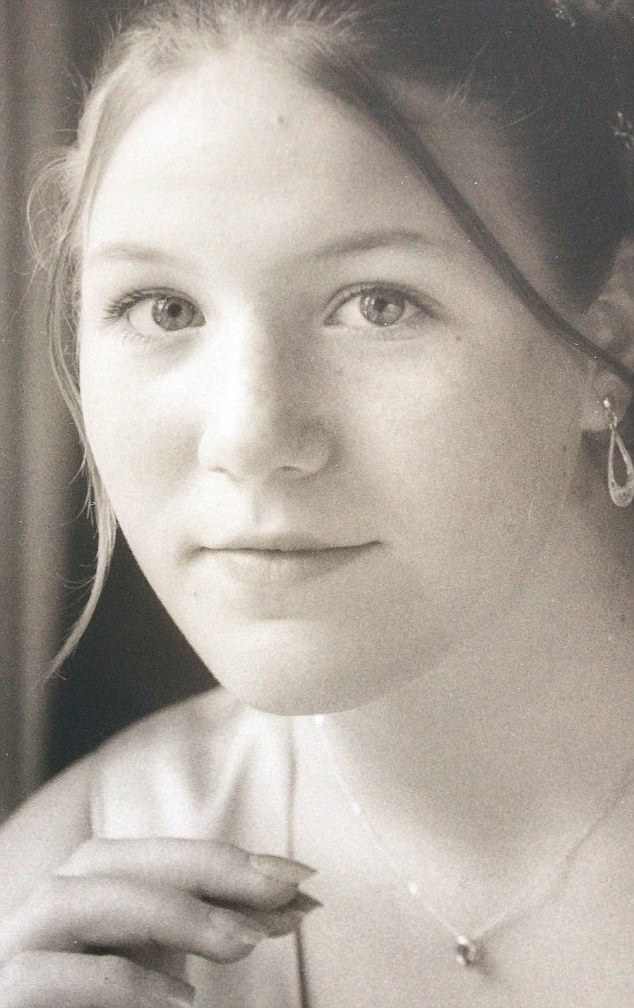 Selfless: Hayley, pictured before the blaze, put herself in danger to help a friend escape 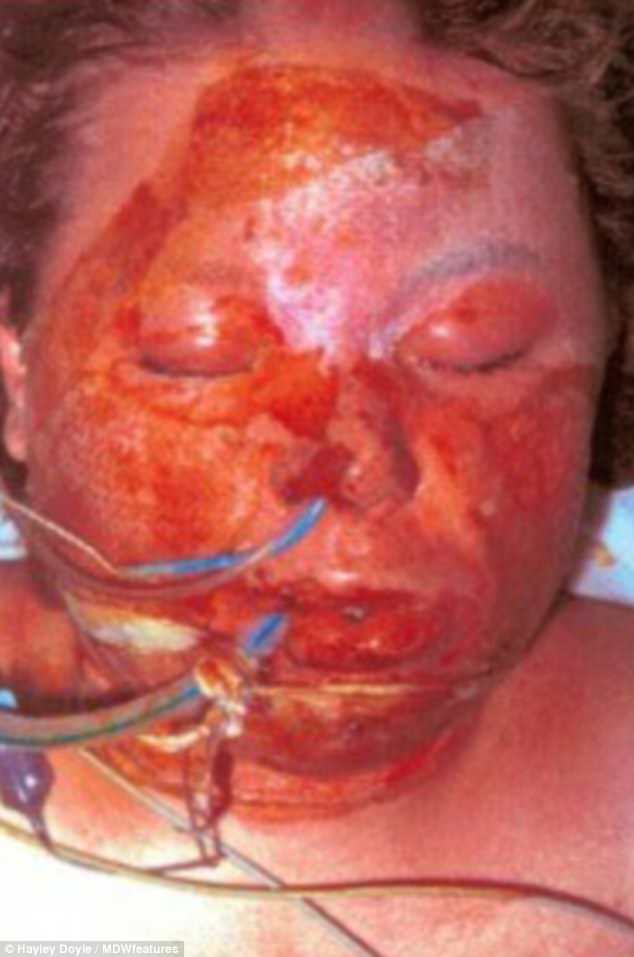 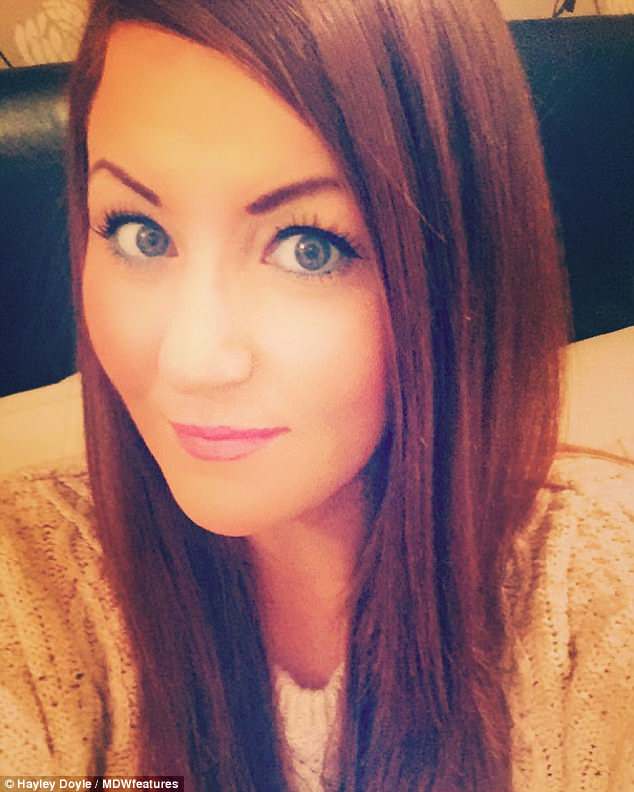 Brave: Hayley, pictured today, is turning her attention to helping other burn victims

‘I think people were just in a state of panic. I had inhaled so much smoke; because you swell on the outside, you close off from the inside, so it was a real emergency to get me to the hospital and on a ventilator before my airways completely closed up.

‘A firefighter came running up to me, took his jacket off and he wrapped it around me. He put this gel mask around my face and my hands in bags of gel that I had to wrap around them. He just kept telling everybody to keep calm and kept talking to me as I was going in and out of consciousness.

‘I had tight clothing on and that’s what saved the rest of my body from being severely burnt. The only thing that was really burnt were my hands, my face, my neck and around my waist where the rubber band had stuck to my skin.

‘I also had braces on and they melted in my mouth. My mum also bought me a necklace to protect me and that was embedded in my neck, which is why I’ve got a big scar around my neck.

‘I was in hospital initially for around five or six months to begin with, and collectively had over 100 operations altogether.

‘Doctors advised my mum and dad that there is a chance that they would have to amputate my hands. I’m still recovering now I suppose because I’m still having laser surgery to help with the mobility and appearance of my scars. 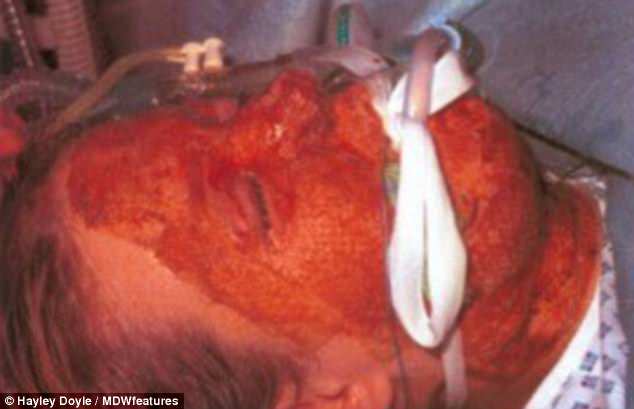 Traumatised: Hayley remembers feeling her skin coming off ‘like string’ in her hands 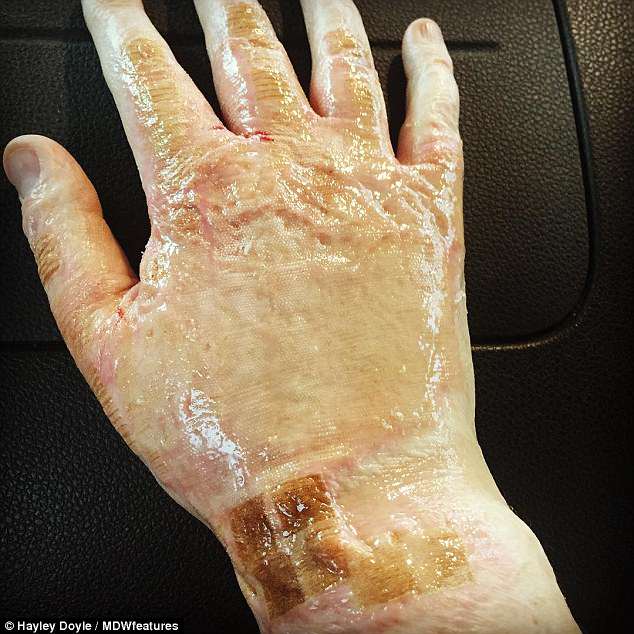 Painful: Hayley’s hand, swollen and burnt, shortly after the fire when she was 14 years ol

‘When you are breathing in a fire, every second that you breathe it burns and I was trying to shout but the flames burned my inside.

‘You know the sound from a helium balloon? The sound of my voice – that’s what it was like. My voice was so damaged.’

IT reference specialist Hayley, who helped one of her friends climb out of the burning barn, said the hardest part about recovery was accepting that it was happening. She was also bullied over her burns while growing up.

She continued: ‘I remember the first time I saw my face, what you don’t realise is when you’re in hospital that’s like your safe haven; when you get out of hospital with your burns, that’s when the recovery starts. 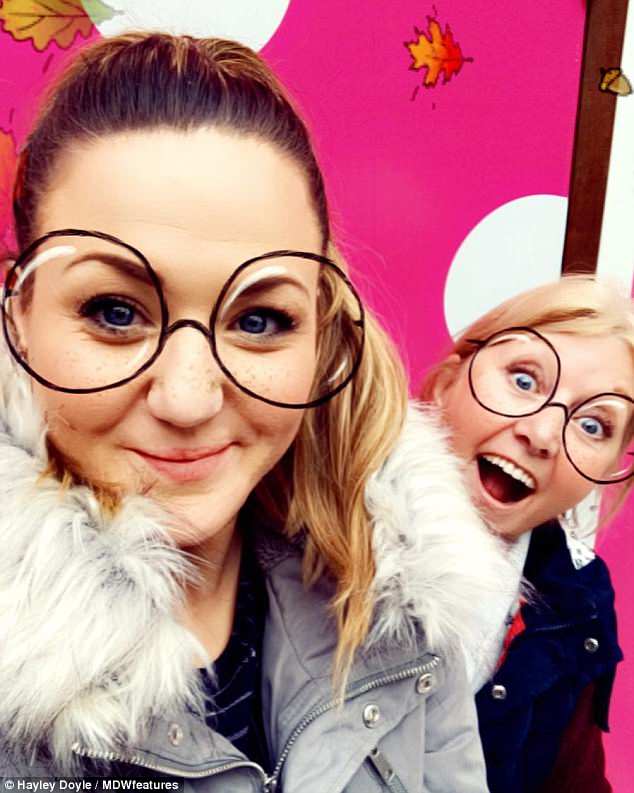 Recovery: Hayley, pictured with her mother, has been supported by family in the 18 years since

‘Nobody can prepare you for that. At that time when I was young there wasn’t anybody out there that I could relate to me and that’s what was missing for me.

‘The doctors and nurses were incredible – I will always be grateful for what they’ve done for me because the work they’ve done from then to now is amazing.

‘I used to have to wash my hands and wear pressure garments and a facemask for 23-and-a-half-hours a day.

She credits acid attack survivor and advocate, Katie Piper, for her surge in confidence ever since she met her for the first time. They have known each other for a few years now. 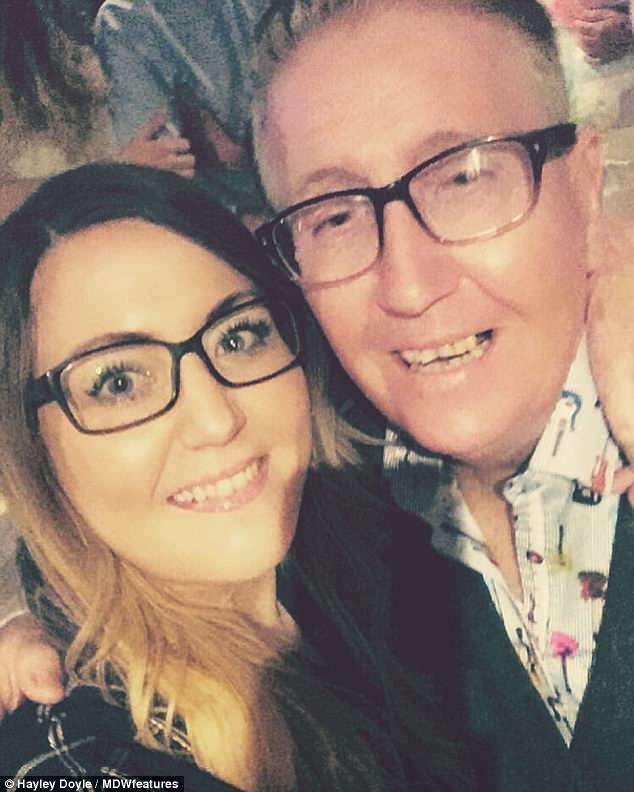 Hidden scars: Hayley, pictured with her father, spent more than a decade suffering from PTSD

Her confidence came along with her PTSD recovery. Someone with PTSD often relives the event through nightmares and flashbacks, and may experience feelings of isolation, irritability and guilt.

‘The incident has changed my life massively, I mean my confidence was the biggest change. I had severe PTSD. I was seeing a psychologist regularly,’ Hayley said.

‘I wouldn’t say it was just one day when my confidence came; it was a long process. I was in denial for many years thinking I was going to wake up one day and my scars would disappear.

‘I can’t change what happened to me, so I have one or two ways it could go; I could either not accept it even though it will still not change or see the good in a bad situation and make the most of it. I’m so proud of who I am and will never be ashamed – my scars make me unique.

‘Before I met Katie Piper, I lacked in self-confidence and her, her team and her foundation are what gave me a big leap up. 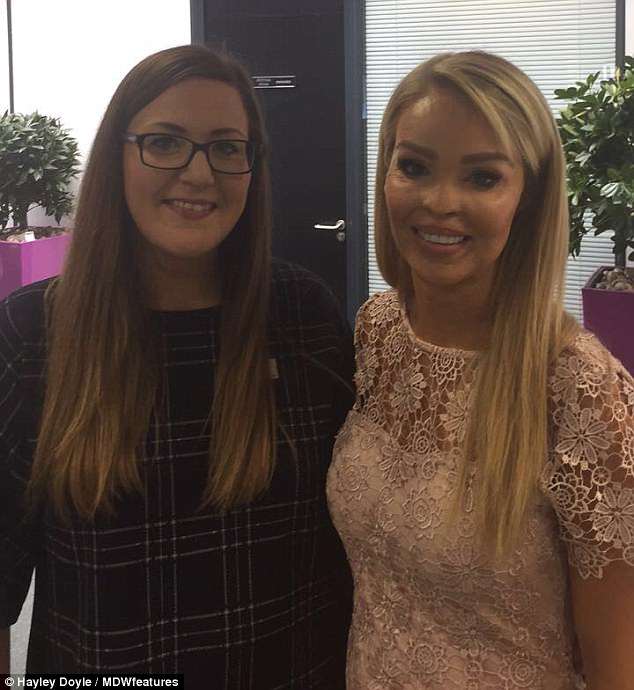 ‘She’s amazing and so inspiring. She’s got such a positive outlook on life. You look up to somebody like that and I never really met someone that had gone through a similar experience to me before so being able to relate to someone like her really helped regain my confidence.

‘I wish the “now me” could have spoken to me then you know? At the end of the day, if somebody gave me a time machine and said that you could turn back time and live your life without being burned, I wouldn’t.

‘By always having a positive attitude, it has made the recovery process so much easier. Don’t get me wrong, it’s been a long, long journey, however, by being positive, not hiding away from it and following my dreams I’m always going to be the winner.

‘It completely defines who I am as a person, and I have developed strength I never knew I had. I’m now supporting people who have been burnt.’