Memories of Her Majesty! Traditional Nigerian ruler arrives to meet Prince Charles in the same Rolls Royce used by his mother the Queen during her 1956 visit

Prince Charles met with Nigeria’s traditional rulers today – and found a touching memento of his mother.

The prince was introduced to seven of the country’s most powerful regional leaders at the residence of the High Commissioner in Abuja and immediately spotted that one of them, the Emir of Kano, had arrived in a Rolls Royce used by the Queen during her visit in 1956.

Speaking after the event, the Emir of Kano explained that the Queen had used the Rolls Royce Silver Wraith when she visited Nigeria in 1956.

She then gifted it to a local authority and his grandfather bought it from them.

‘When her Majesty the Queen came to Nigeria in 1956 this was the car she drove around in, it was provided by the colonial office of the British Government.

‘Then after she left it was given to the Northern Regional Government, the British and then my grandfather, the Emir Muhammadu Sanusi, as head of Kano Native Authority. ‘So that car has been at the palace since 1956. ‘

Asked whether he drives it very often, he said: ‘Well, I drive it when I want to show off! If I come to Abuja and have a meeting with the President then I often take it as no-one has a car like that. ‘ 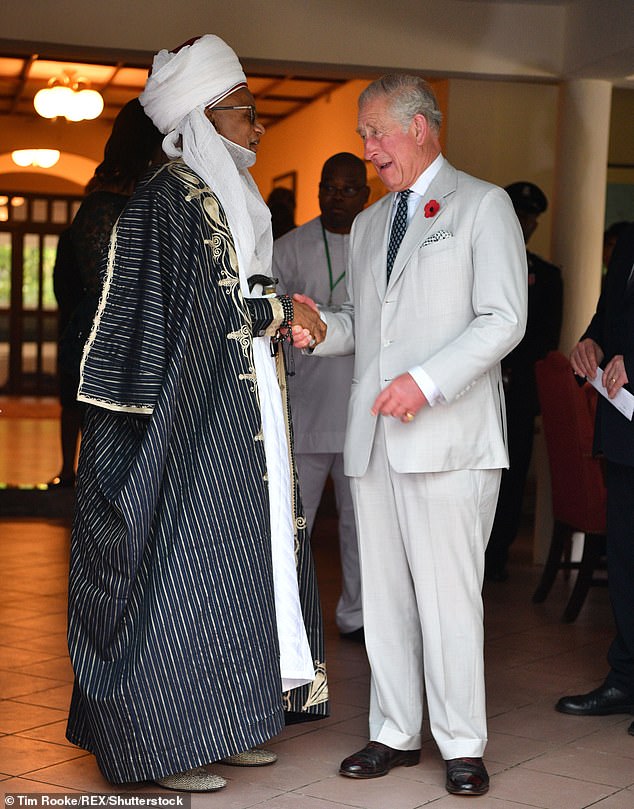 A touching tribute! Prince Charles met with the Emir of Kano who arrived in a Rolls Royce used by his mother the Queen during her visit to Nigeria in 1956 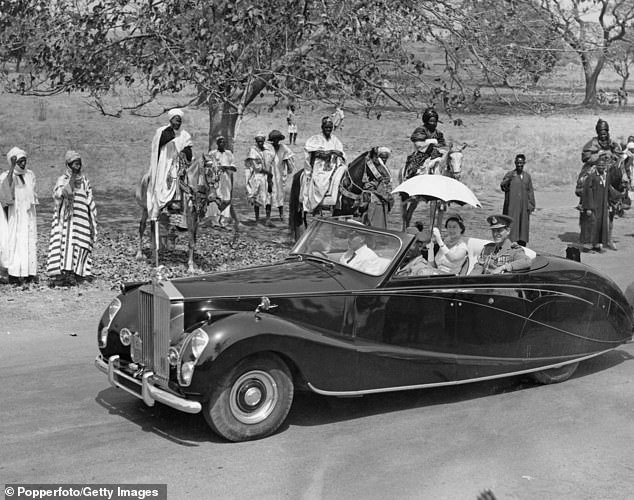 Memories! The Queen and Prince Philip in 1956 travelling in the same 1952 Model Rolls-Royce Silver Wraith ‘ALW 11’ as the Emir of Kano used today when he met with Prince Charles 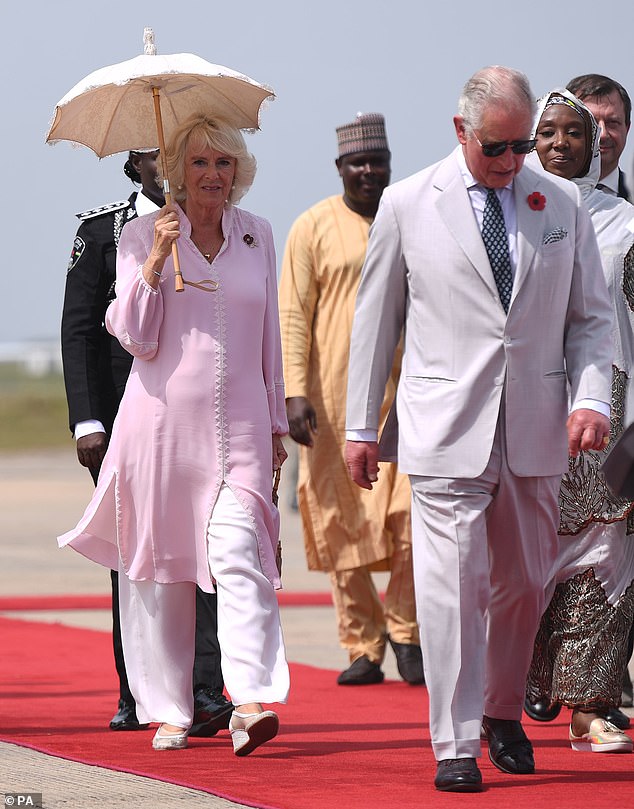 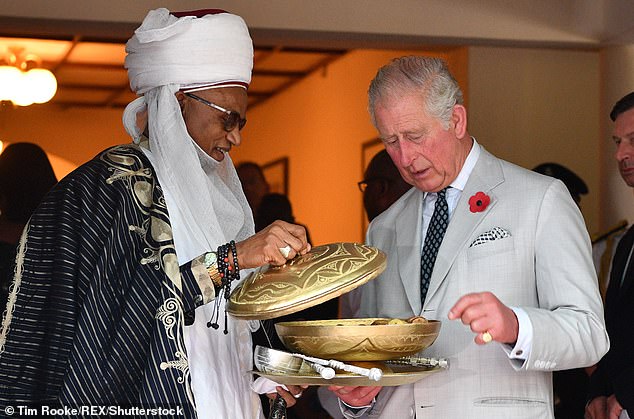 A welcome gift! Prince Charles was presented with an ornate bowl by the Emir of Kano after exchanging pleasantries 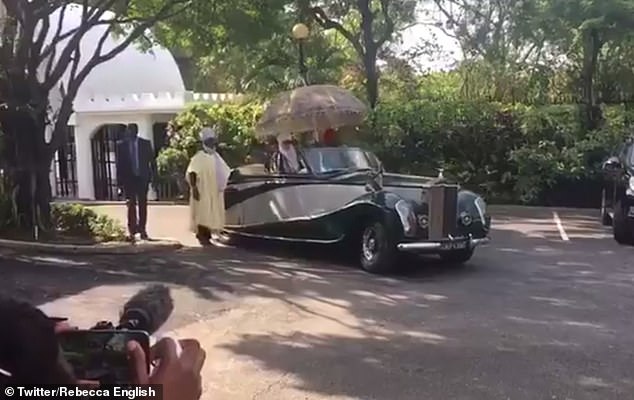 The Emir of Kano arrived in a 1952 Model Rolls-Royce Silver Wraith ‘ALW 11’, which was used by the Queen during her visit to Nigeria in 1956 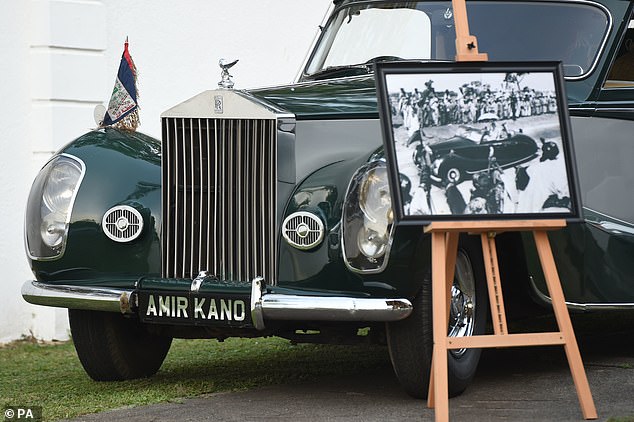 The car that Queen Elizabeth II drove in when she visited Nigeria in the 1950s, beside a framed picture of her outside the High Commissioner’s Residence in Nigeria

He described their meeting with the Prince of Wales as hugely positive.

‘For me, personally, I follow a lot of the issues he has talked about with great interest. In this country and others, we lose sight of the big picture issues.

‘One of the great things about the prince is that he brings to the table a voice for these issues.

‘It’s so easy to get caught up with the conflict between herdsmen and farmers in one place, a murderous conflict here, an ethnic clash there, and lose sight of the entire eco-system that brings about such conflict…..urbanisation, demographic explosion, the lack of farmland, poor planning of cities.

‘It is a cultural shift that people have to make and the prince is very astute on spotting this.’ 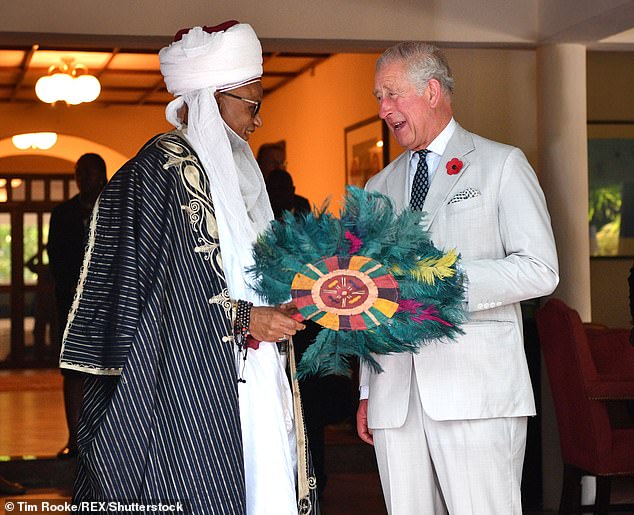 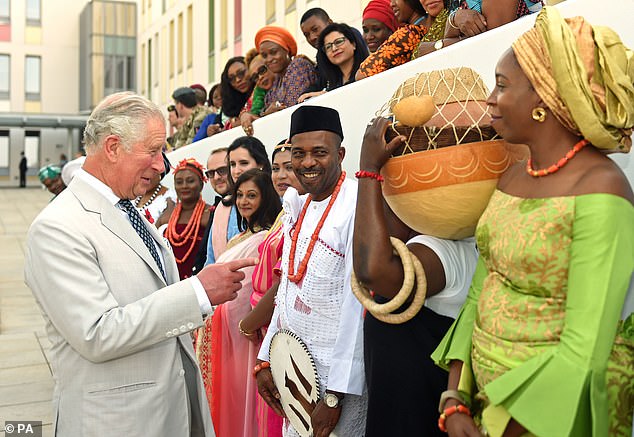 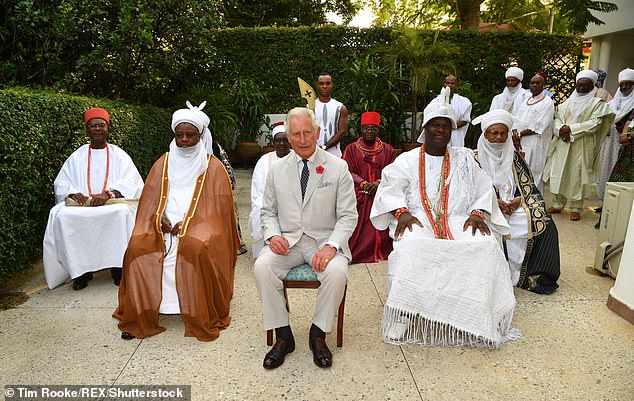 The Emir, a self-confessed Gooner – Arsenal supporter – said he was also an avid reader of the Daily Mail, particularly for the sport. ‘I am an Arsenal fan and I like the sports pages, I like your sports writers,’ he said.

‘I am a life-long and long suffering Arsenal supporter. If there is a match on, I go, ‘ he admitted.

The seven men, dressed in their traditional finery, arrived in a procession of vehicles shortly before the prince and were shielded from the sun as they stepped out by staff bearing brightly-coloured parasols.

They waited inside for the guest of honour to enter before being introduced to him, one by one. 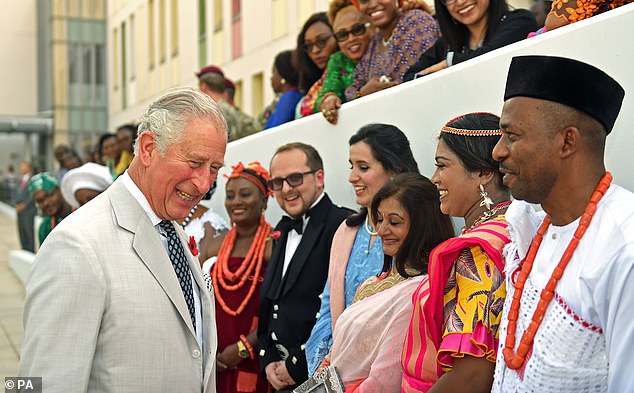 Always on form! He’s had a busy schedule of engagements, but Prince Charles seemed full of energy as he carried out another day of royal duties in Nigeria, meeting with members of staff from the High Commissioner’s Residence in Nigeria

After a handshake and an exchange of pleasantries, each man leader offered the British royal a gift – bowls, fans and books – which Charles warmly thanked them for.

The group was led by His Eminence, the Sultan of Sokoto, and followed by the impressively dressed His Imperial Majesty, the Ooni of Ife, who also carried a glittering staff.

One member of the entourage couldn’t resist snapping a right royal selfie of his boss, the Emir of Kano, with the prince, despite the solemnity of the occasion. The royal party then posed for a group photograph. 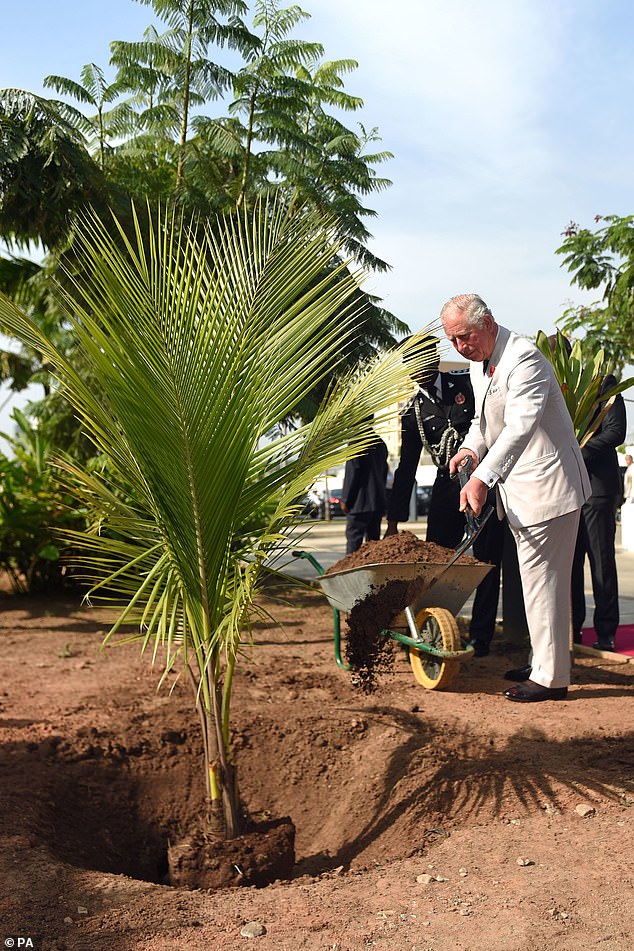 Green fingered! The Prince of Wales helped to plant a tree at the High Commissioner’s Residence in Nigeria, on the last leg of his official trip to west Africa

Nigeria’s traditional rulers have their origins in the independent states and kingdoms that existed in Nigeria before the colonial period.

Many of these roles were maintained during the colonial era, through the policy of indirect rule.

Post-independence, Nigeria preserved the titles but changed their functions to a more ceremonial role.

Nonetheless the traditional rulers continue to command significant respect and influence in their respective communities.

Many traditional rulers play a role in conflict mediation within their domains and in preserving the cultures and traditions of their ethnic group.

After the introductions, the group sat down together for a discussion led by the British High Commissioner, Paul Arkwright.

He described it as a ‘very rare opportunity’ for so many of the traditional rulers to come together.

He said the prince was keen to hear from them about the work they are doing to promote ethnic cohesion in a country riven by violent rivalry that has left thousands dead and what the UK could do to help.

Earlier today, the royal couple touched down in the capital Abuja on a private jet and were greeted by a Guard of Honour on the red carpet. 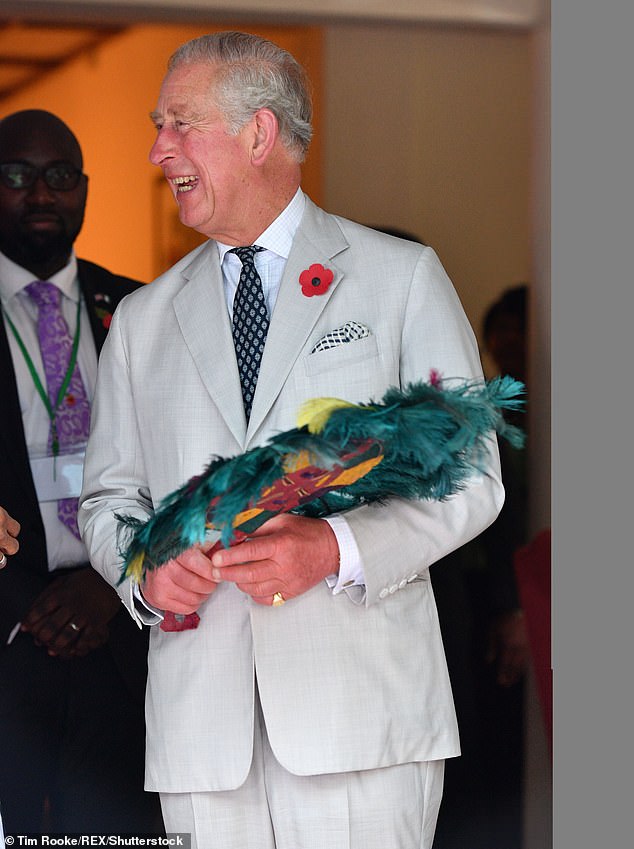 Along the dignitaries receiving them were the British High Commissioner, Paul Arkwright, and the Nigerian Foreign Minister, The Hon. Mr. Geoffrey Onyeama.

Following a rendition of the National Anthems, the prince, wearing a beige linen suit and sunglasses, inspected the Guard of Honour – resplendent in green, red and gold – and departed for The Presidential Villa to meet the country’s political leader.

Yesterday Clarence House officials revealed that they had been forced to cancel a planned visit to Jos in central Nigeria on Thursday by Charles.

A Foreign and Commonwealth Office spokesman said the decision had been taken for security and operational reasons.

The region has been plagued by ethnic, tribal and religious violence with dozens killed in recent months. 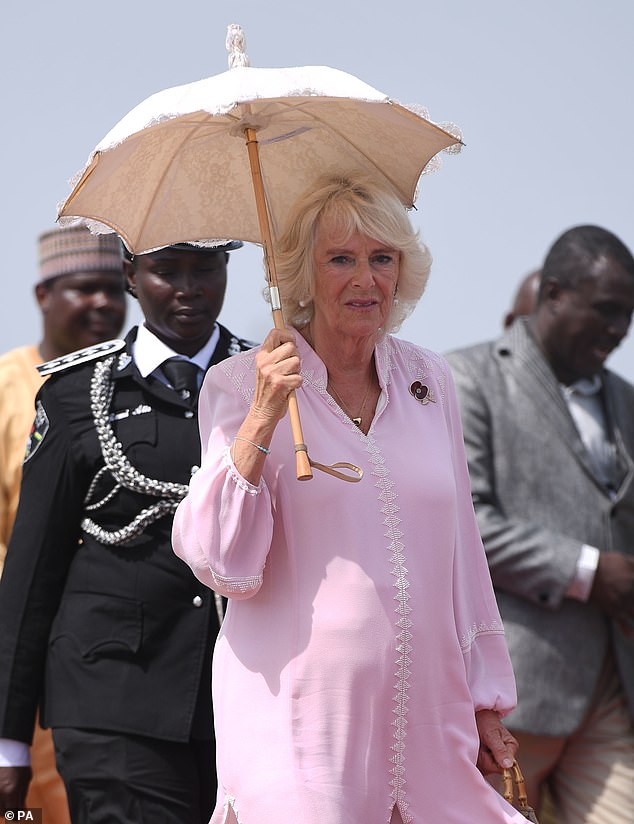 Keeping her cool! Camilla kept the 33C heat at bay with a parasol and dressed in a floaty pink Anna Valentine kaftan top and palazzo pants 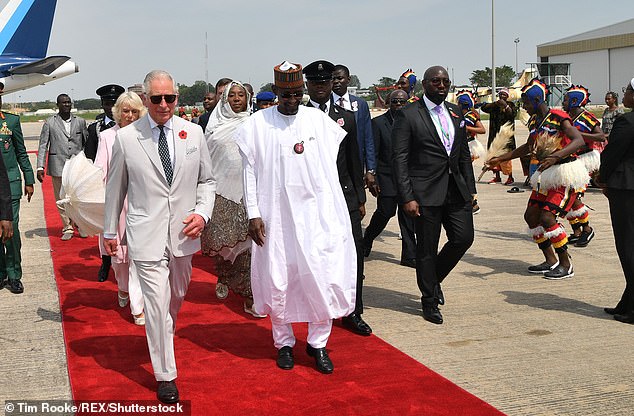 Roll out the red carpet! The royal couple were greeted at the airport with a display of traditional dancing 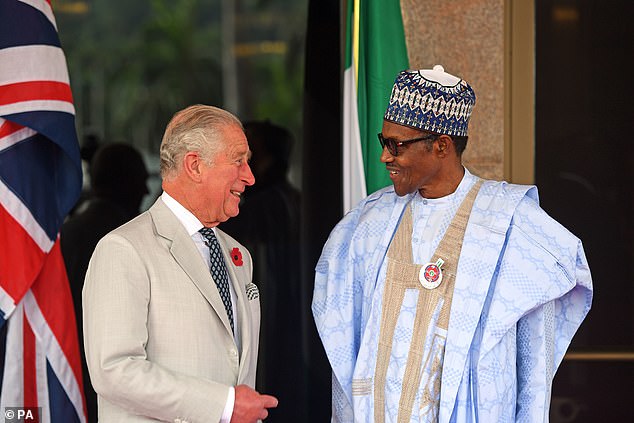 Sharing a joke! A smiling Charles and Nigerian President Muhammadu Buhari at the presidential villa in Abuja

Cheerful Charles! The prince looked in great spirits as he met staff at The British High Commission in Abuja 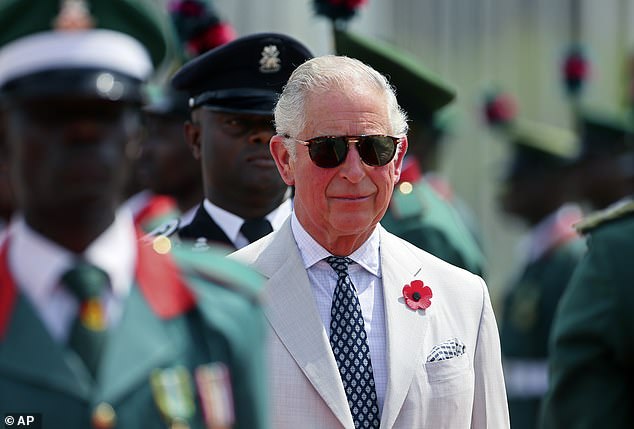 Cool customer! Prince Charles looked dapper in a light grey suit and shielded his eyes from the sunshine in a pair of trendy dark shades 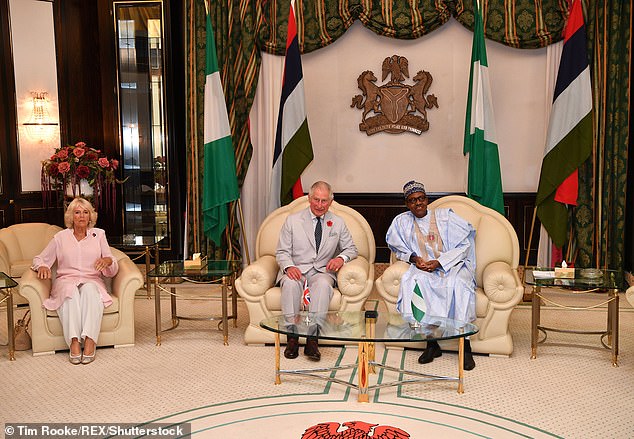 The royal couple had an audience with The President of the Federal Republic of Nigeria, His Excellency Mr. Muhammadu Buhari at The Presidential Villa in Abuja

Camilla will undertake engagements with her husband today but will fly back to London tomorrow.

Yesterday, Prince Charles made reference to the Duke and Duchess of Sussex’s unborn baby as he made an impassioned call for the world to act urgently to stop plastic polluting the planet.

The heir to the throne referred to the prospect of becoming a grandfather for the fourth time and pleaded for people around the world to create a better future for all grandchildren.

Charles, who is on a nine-day tour of West Africa with the Duchess of Cornwall, made the off-the-cuff remarks at a gathering of government officials and leaders of business and civil society to discuss plastic waste in Ghana. 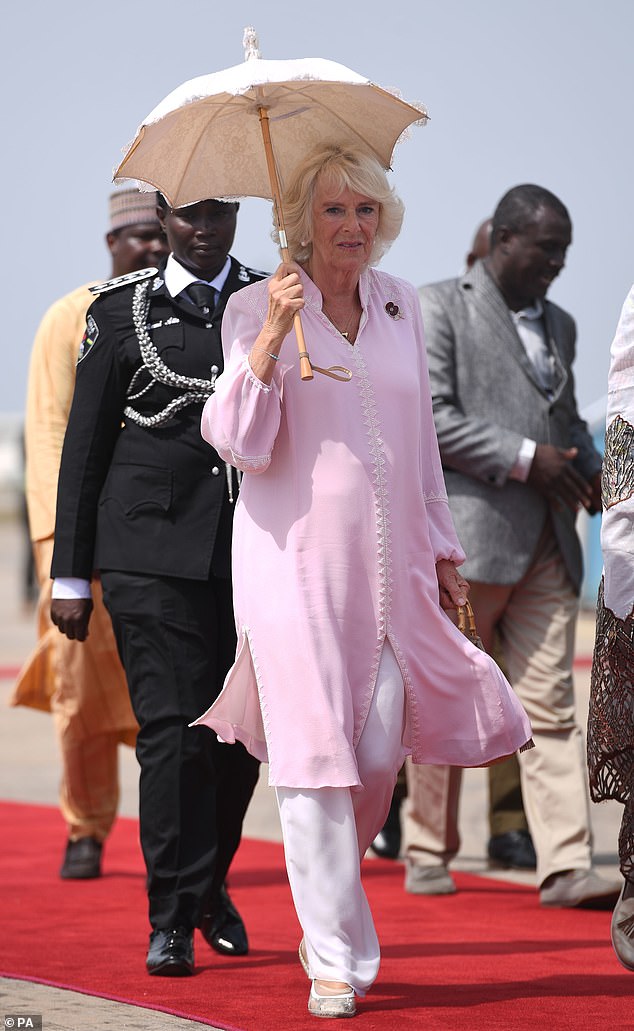 Keeping her cool! The Duchess of Cornwall wisely shielded herself from the sun’s rays under a parasol as she made her way down the red carpet 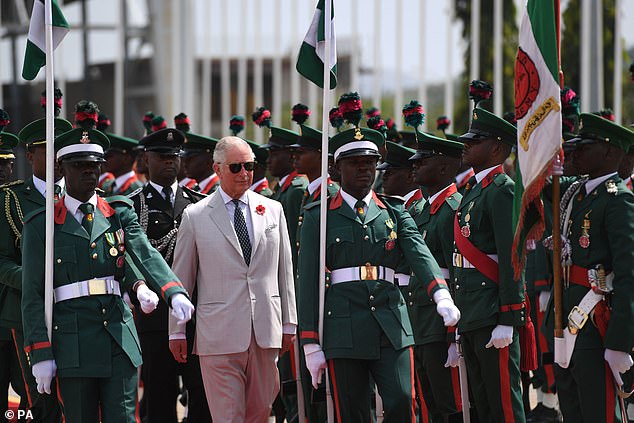 Warm welcome: After touching down in the Nigerian capital Abuja on a private jet the couple were  greeted by a Guard of Honour on the red carpet 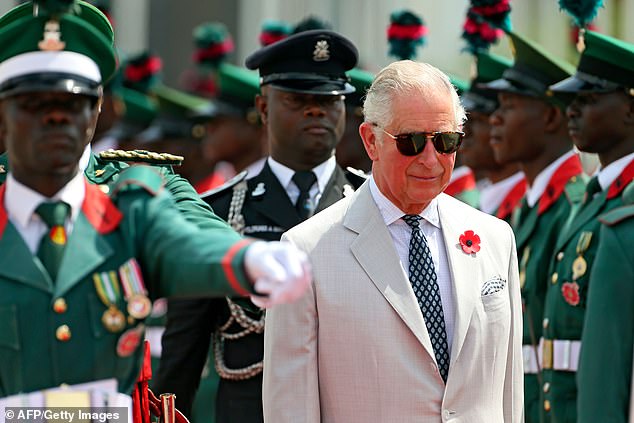 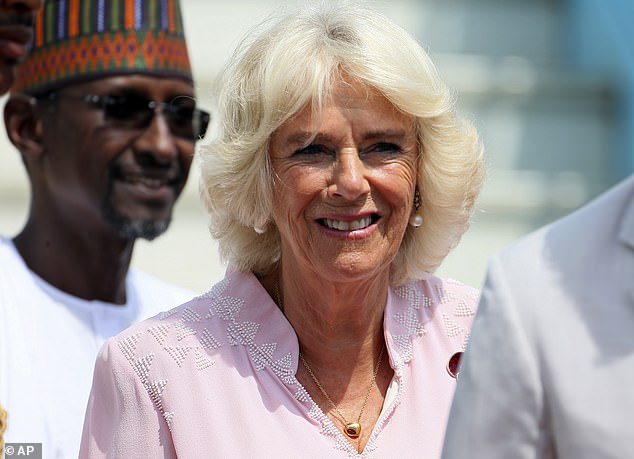 The Duchess of Cornwall was pretty in pink in an Anna Valentine Kaftan. She teamed her ensemble with a gold necklace and pearl drop earrings 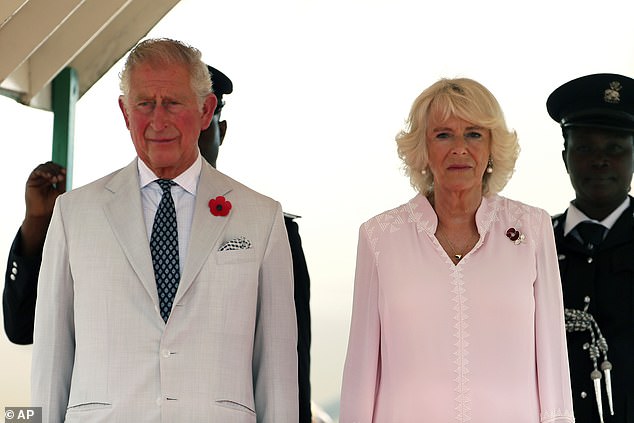 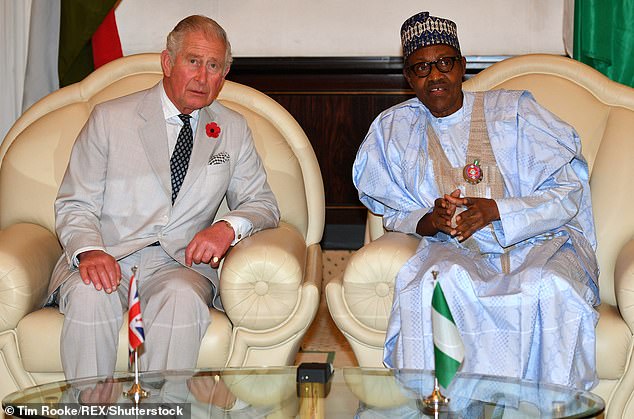 The first stop on the agenda was a visit with the President of the Federal Republic of Nigeria, His Excellency Mr. Muhammadu Buhari at The Presidential Villa in Abuja 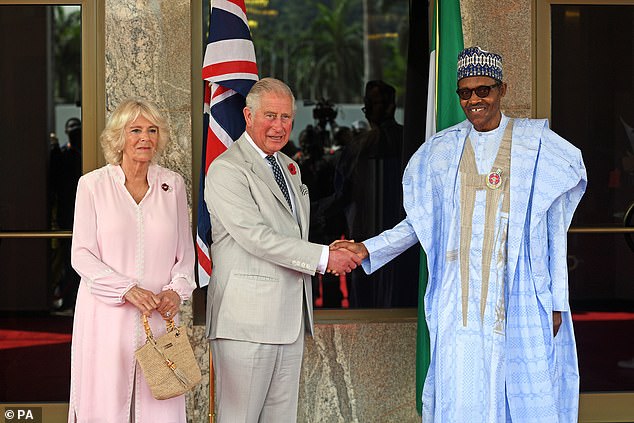 A warm welcome! Prince Charles and the Duchess of Cornwall are greeted by Nigerian President Muhammadu Buhari at the presidential villa in Abuja, Nigeria

At the event at a beachside nightclub overlooking the Atlantic Ovean in the Ghanaian capital, Accra, he told those at the meeting: ‘I am about to have another grandchild actually. I suspect quite a few of you may too have grandchildren or will do soon.

‘It does seem to me insanity if we are going to bequeath this completely polluted, damaged and destroyed world to them.

‘All grandchildren deserve a better future.’

Charles is said to be delighted at the news that his youngest son, Prince Harry, is set to become a father for the first time next spring with his wife, Meghan. 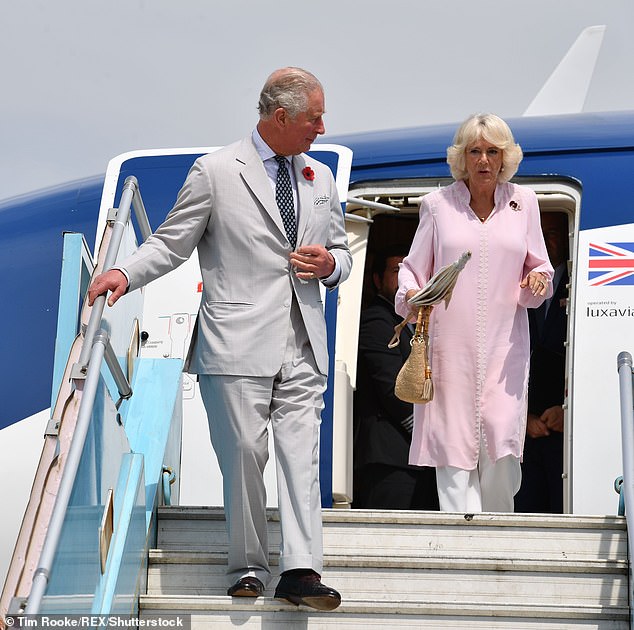 Welcome to Nigeria! Charles and Camilla are on the final leg of their nine-day visit to West Africa and arrived in Abuja from Ghana by private jet 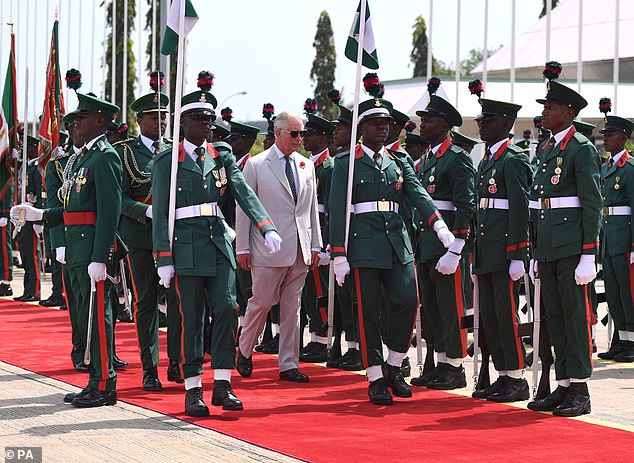 The Prince of Wales inspected the Guard of Honour – resplendent in green, red and gold – before departing for The Presidential Villa to meet the Nigeria’s political leader