Is rosé in your blood? A genetic sequencing company says it can predict which WINE you’ll like based on your genes – and FEMAIL has put the results to the test

For most people, it takes years — and lots and lots of tasting — to determine which varieties of wine they like best. But one company is working to take all the trial and error out of the process, and claims that the key to a person’s wine preferences lies in his or her DNA.

Vinome uses genetic sequencing to determine what flavors appeal most to a person, and from there it predicts which wines he or she will enjoy best.

But does it work? Two FEMAIL reporters put the results — and a couple glasses of vino — to the test 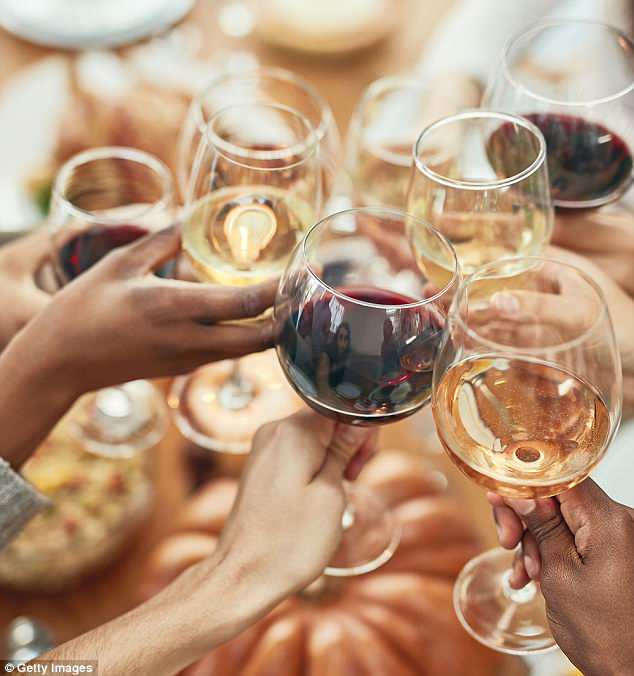 I bleed white wine! FEMAIL tested out a service that claims to be able to predict wine preferences based on a person’s DNA 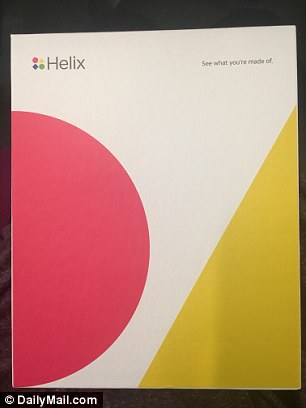 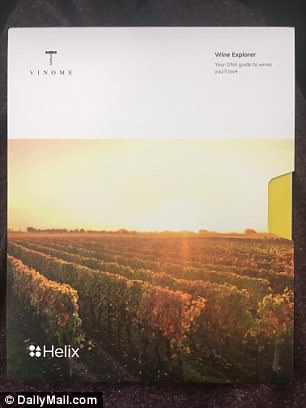 The test: The Vinome Wine Explorer DNA test is conducted through Helix. Users spit into a vial and send it off for genetic sequencing, which takes six to eight weeks

The Vinome Wine Explorer DNA test is conducted through Helix, a site white offers several different services based on DNA testing results. Customers need only submit a DNA sample once to Helix, and then have the option to buy several different programs and packages.

Like other DNA sequencing kits including AncestryDNA and 23andMe, this one’s a somewhat lengthy process. A kit arrives in the mail with instructions and a special test tube. You have to spit into the test tube, shake it up with an included chemical, and then ship off your saliva in the provided box.

Then you wait six to eight weeks for the results.

The individual results offer insight into a person’s flavor affinities, including tastes they are genetically predisposed to like and dislike.

They tell you whether you are more likely to like reds or whites and then recommend specific wines based on the results. From there, customers can go out and buy the wine on their own, or shop recommendations form Vinome’s store.

True! The results assign each user a flavor profile. Mine was ‘Bright Expectations,’ and it was explained that I like peaches, honey, apricots, guava, and sweetness 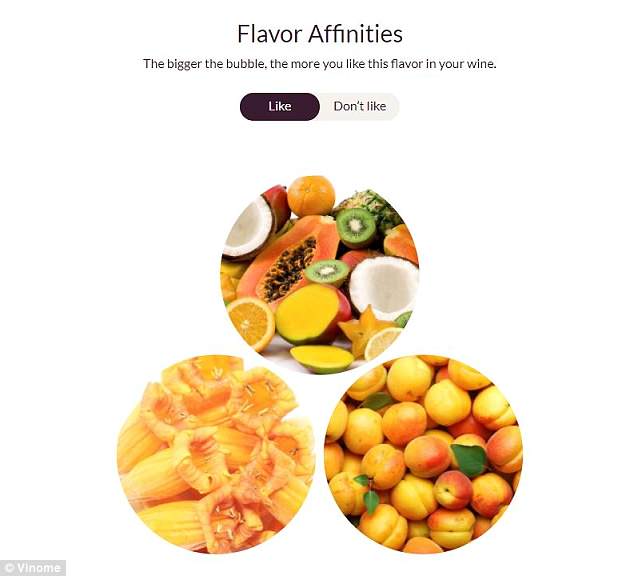 All sweetness: The results also break down which flavors you like in your wine. While peaches and tropical fruits aren’t my favorite foods, I do like those notes in my vino 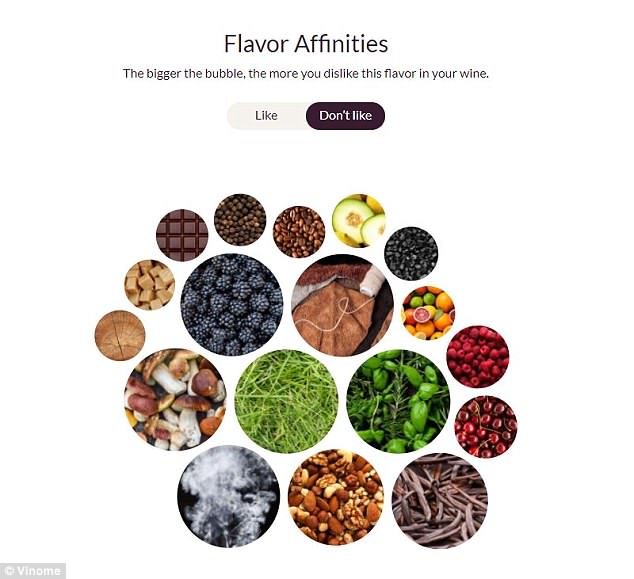 Skip ’em: I love chocolate, coffee, and butterscotch — but Vinome predicted I wouldn’t like those flavors in my wine 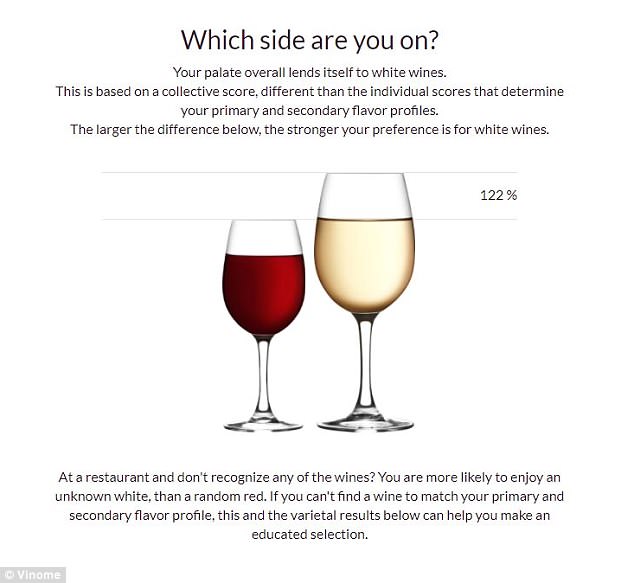 They know! The company said I lean much more toward white wines than red ones, which is definitely accurate

I have personally always been a white wine drinker. I may dabble in rosés from time to time, but no matter how many reds I’ve tastes, I can’t find a single one that doesn’t make me go ‘blech’.

And according to my genetics — I likely never will. My Vinome results indicated that my palate ‘overall lends itself to white wines’, and I enjoy them by 122 per cent more.

In that regard, the test was spot-on, and gives me a scientifically-backed ‘out’ the next time I’m with a group that wants to order a bottle of red for the table.

Vinome said my overall flavor profile was ‘Bright Expectations,’ meaning I rpefer a glass ‘that tastes of peaches and honey,’ and that I enjoy notes of apricot, guava, and tropical fruits with ‘just a touch of sweetness’.

But while I agree with the results’ assessment that I much prefer white over red, their take on what flavors I gravitate toward felt less perfect.

They predicted that I love stone fruits like peaches, tropical fruits, and honeysuckle, none of which are among my favorite flavors — but that could be because I prefer them more as notes in my wine than actual foods. 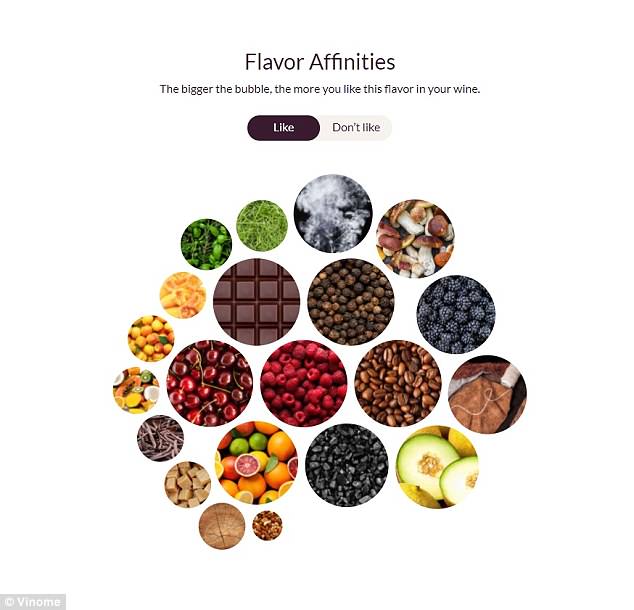 Try it all: The company said that based on her genetics, she likes all the common flavors found in wine 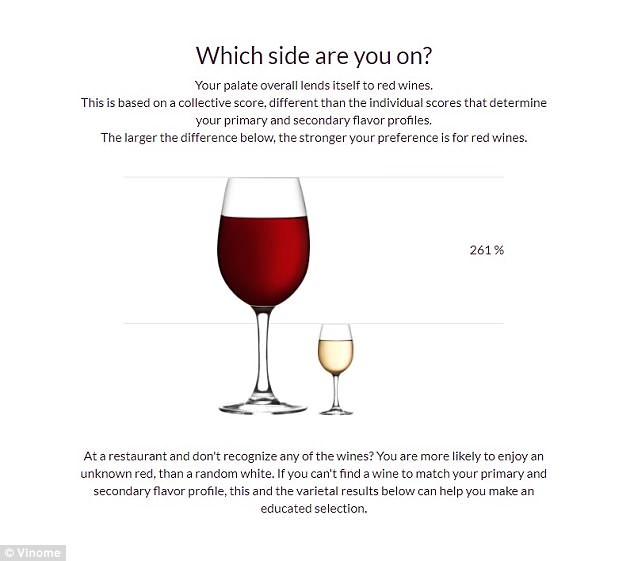 Spot-on! They found that she had a heavy preference for red wine over white, which she said is accurate

While a lot of those things are my favorites (coffee and chocolate, hello!), it’s true that I don’t want my wine to taste like them.

Valerie Seibert, who also took the test, had a similar take. She said: ‘My immediate reaction is that the results look kind of like a horoscope — notably vague with descriptions that could really apply to anyone — but I have to say that I warmed to it as I went through the profile.

‘My flavor profile is “Jam Dunk,” which has be skeptical off the bat because it has the word “juicy” in the description. However, chocolate, truffle and pepper are all on the money.’

Valerie also had a secondary flavor profile, which predicted she liked citrus — though she said that ‘definitely doesn’t jive’. 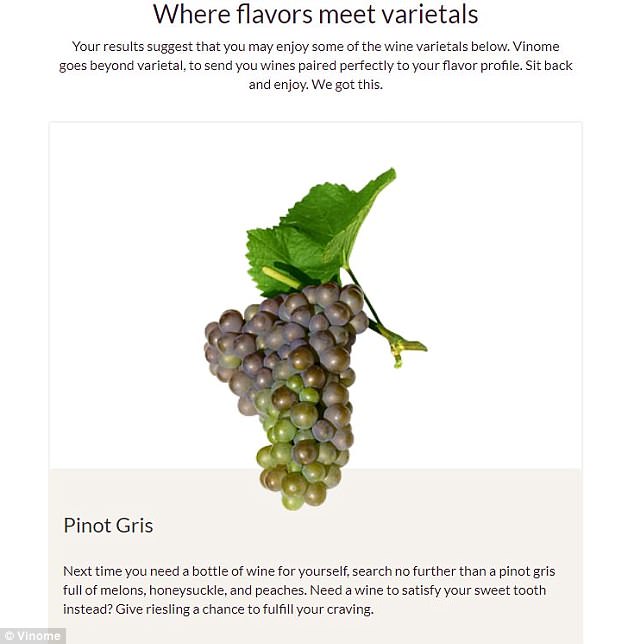 Love! Vinome recommended I drink Pinot Grigio, which I really like. It also suggested Riesling, which was already one of my favorites 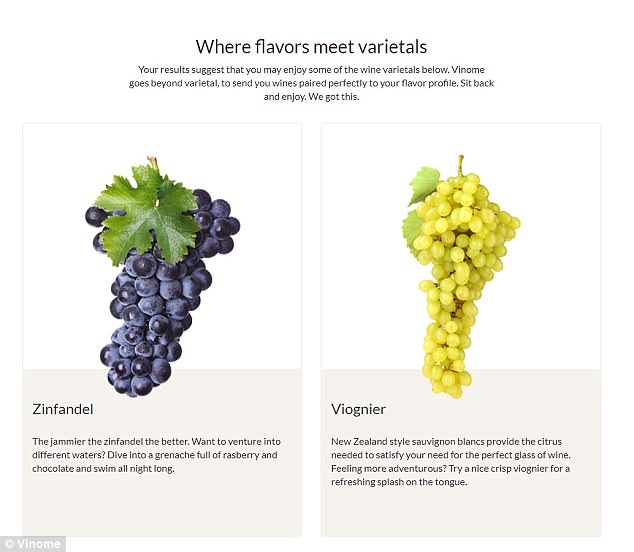 Somewhat convinced: Valerie liked their recommendation of Zinfandel for her. And though she’s never before found a white she liked, she was pleasantly surprised by the Viognier 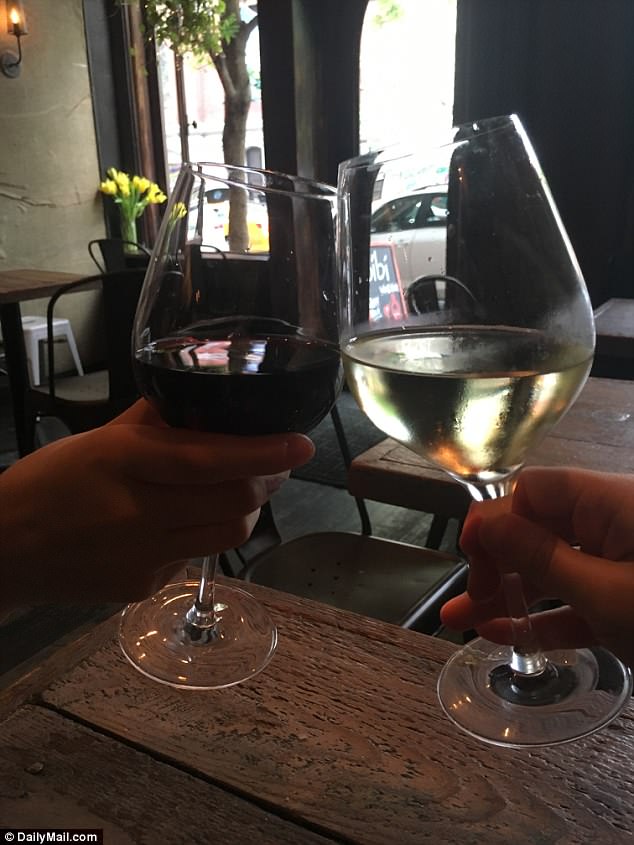 I’ve made more of a habit ordering Pinor Grigio since I got my results, and have yet to be disappointed

‘Whenever possible I will put a cucumber in my G&T over a lemon or lime,’ she noted.

‘I was even more skeptical when I got to the “flavor affinities” section, which oddly declared that there are zero flavors I dislike,’ she said. ‘However, when I looked at the bubbles, which are sized in a way corresponding to my affinity for the flavor, I found it pretty well matched.’

Vinome also knew that she preferred red over white.

‘It gave me a heavy preference towards red (261 per cent higher than white) — check,’ she said.

But what about the top wine recommendations? Valerie and I were both impressed with their suggestions.

For me, their top tip was to drink a Pinot Grigio. That particular white was already in my rotation, but since getting my results, I’ve made a point to order it more consistently — and have found that I actually enjoy my drink more consistently, too. Point to Vinome!

The company’s second suggestion for me was Riesling, which is already a favorite. 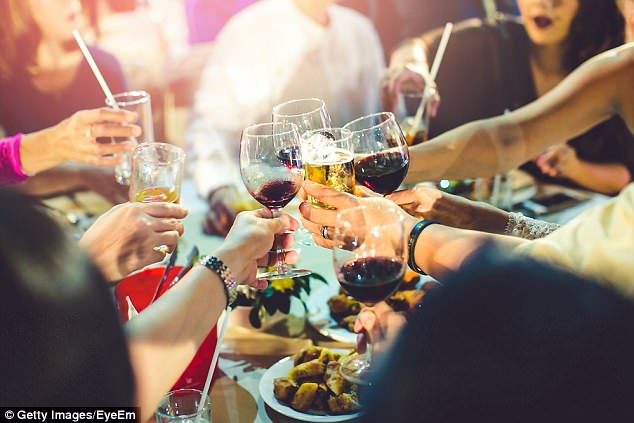 Cheers! The test can tell what flavors we are genetically disposed to liking, though that doesn’t account for tastes we acquire over a lifetime 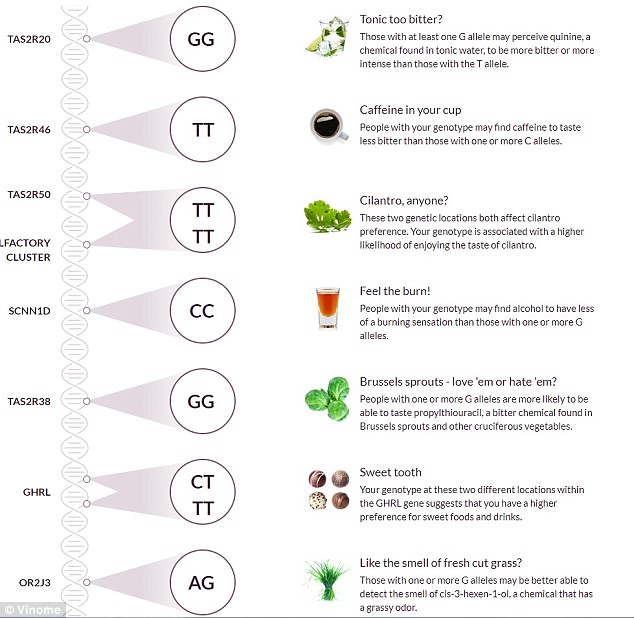 Valerie, meanwhile, considered Cabernet her favorite wine. Vinome, however, suggested she pick up a glass of Zinfandel or Viognier (a white).

Upon realizing they meant Zinfandel, a dark, fruity, spicy red — and not White Zinfandel, a super-sweet rosé — she was sold, happily ordering it at a bar and agreeing that she liked it a lot.

She was more skeptical about the Viognier, since she admits she’s never found a white wine she actually likes. While Viognier likely won’t become one of her go-to orders, she was pleasantly surprised by the taste.

‘I like it,’ she said. ‘But I still don’t love it. It’s most definitely better than most of the whites I have had, though. It doesn’t have that main thing I hate: the super acidic taste at the start. It’s much softer.’

So the verdict? Valerie thought the results seemed just partially-accurate. Though they’re certainly somewhat informative, she thinks this particular area of science needs some fine-tuning.

I, meanwhile, was much more impressed. Though some of the foods listed in my flavor profile seemed question, I really like both of the wines they said I should drink.

I think that there are probably a few other factors that have influenced which flavors I like, but I found it interesting to learn what I’m disposed to liking and won’t feel guilty about hating reds anymore. I can’t help it, it’s in my DNA!