After climbing out of a sports car she struts across a car park in tight skirt and stilettos, swinging every moving part she possesses, much to the delight of her audience of truck drivers and mechanics. But underlying this resounding declaration of sexual pride is a more cautionary note: You mess with me, at your own risk. 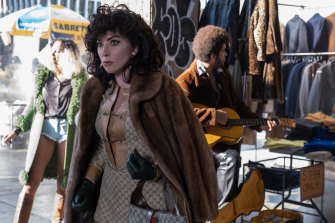 It’s a warning Maurizio Gucci (Adam Driver) fails to heed when she lays claim to him after they meet at a party. In the face of an upwardly mobile, heat-seeking missile of Patrizia’s calibre he hasn’t a chance and the repercussions eventually tear his family apart as well as weakening its hold on a fashion house that has been in its hands for three generations.

Like most dynastic sagas, it’s an irresistible story and Scott has been waiting to tell it since his production company acquired the film rights for Sara Gay Forden’s Gucci biography 20 years ago. Now it’s done and the family has vehemently voiced its disapproval but the film has attracted other criticisms – probably because the story needs an inspired satirist to do it justice. When truth becomes as floridly melodramatic as it does here, a sense of the ridiculous can be enormously useful.

Scott is aware of this but unfortunately for the Guccis, his sense of the ridiculous asserts itself only when he’s dealing with the men of the family. The sheer momentum of Gaga’s performance has the appalling Patrizia emerge as a dangerously flawed but thoroughly understandable human being.

Her marriage to Maurizio is a febrile union of opposites. She’s small, bouncy and scarily ambitious. He’s tall, elegant and retiring. Until she comes along, he has no desire to run Gucci. He wants to be a lawyer. He’s also very close to his father, the fastidious Rodolfo (Jeremy Irons at his most jaundiced), who takes one look at Patrizia and sees the future.

But Aldo (Al Pacino), Rodolfo’s elder brother, has more relish for life’s capacity to surprise. He sees a kindred spirit who is more to his taste than his own son, Paolo (an unrecognisably flabby Jared Leto). Obsessed with his wish to have the company embrace his unremarkable gifts as a designer, Paolo is the butt of the film’s few black comic touches.

Scott’s own love of design clearly dictates a lot of his decisions about the film’s direction. The story spans three decades, beginning in the 1970s, which gives fashion great scope in denoting the passing of time and, in Gaga, Scott has found an enthusiastic collaborator. Patrizia’s clothes and hairstyles become an intrinsic part of her performance as she gradually refines them – up to a point. No matter what she wears, she always leaves plenty of wiggle room until Maurizio abandons her for a younger, classier woman (Camille Cottin). At that point, desperation takes over and she ceases to care how she looks.

Scott’s direction is at its most uncertain when he’s trying to muster up the gallows humour to grapple with the story’s most bizarre aspect – Patrizia’s alliance with the astrologer, Pina Auriemma (Salma Hayek), in plotting her revenge against her ex-husband. It’s a combination of the comic and the macabre that needs the kind of deadpan gifts that have never been part of Scott’s armoury.

Gaga could have overwhelmed Driver in their scenes together but his performance is so finely calibrated you can see the seismic shift in his feelings towards her long before she does. As she boils, he recoils while remaining too well-mannered to say so. But once his dignity hardens into arrogance the response is volcanic.

Despite his associations with that other Italian dynasty, the Corleones, Pacino is not guilty of portraying Aldo as an insensitive thug, as the Guccis have complained. Along with his casual attitude to the tax laws, his Aldo has an extrovert’s charm, and Irons, too, brings complexity to Rodolfo, who softens on learning he’s to be a grandfather.

Scott has made an absorbing film, meticulously put together, but the perversely paradoxical nature of the Guccis’ tragedy has eluded him.