Shoppers slam Asda for an ‘appalling’ grammatical error on a booze-themed Father’s Day T-shirt – so can YOU spot the mistake?

Asda has come under fire for an ‘appalling’ grammatical error on a Father’s Day T-shirt on sale in store.

The mistake was spotted by Mumsnet ‘Caribou58’ who shared a snap of the offending top on the parenting forum.

Featuring a print of three pints of beer the tee is emblazoned with the logo ‘Dad’s don’t do things by halves’.

In this case the word ‘Dad’s’ incorrectly uses a possessive apostrophe leaving the mother infuriated at the lack of attention to detail.

Leaving users to spot the error, she wrote ‘To think Asda need a kick up the **** for this?’ 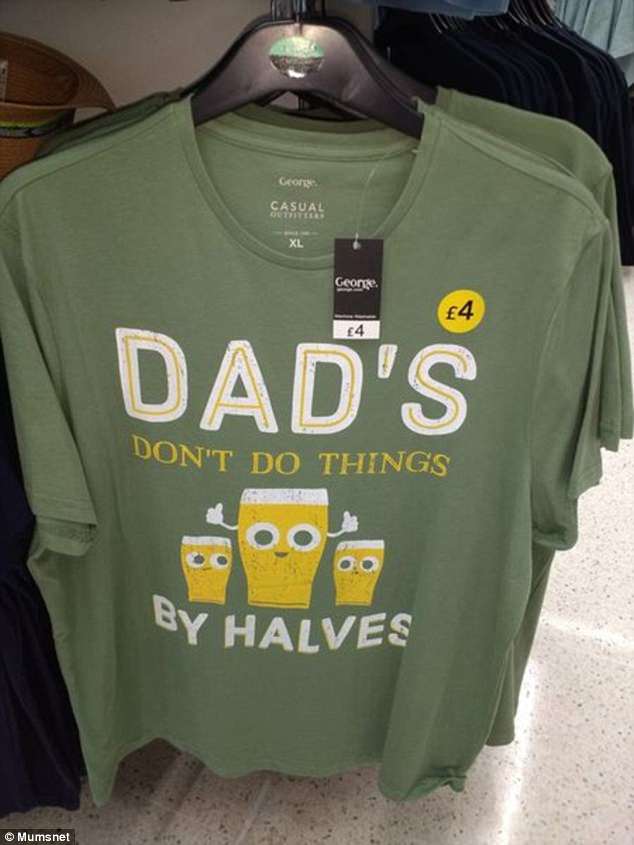 The post immediately received a wave of responses equally horrified by the almighty slip-up with many plotting to troll the supermarket until they issue an apology.

However, a small number of people were more offended by the theme of the design than the error while another admitted they wouldn’t have noticed the mistake had it not been pointed out.

A number of users slammed the t-shirt design as ‘naff’ and were quick to point out a misplaced apostrophe.

The original poster admitted she had concerns that Asda was exposing children to grammatical errors.

She wrote: ‘I’m not offended by it (nor did I say I was), I’m annoyed by the errant apostrophe. I do think large retail chains ought to have someone checking their products for spelling, punctuation and grammar.

‘I’m sure most parents would prefer it if their children were not exposed to such errors, given that they’ll be tested on them all the way up to A level…’

Many Mumsnet users were baffled as to how the t-shirt had come into production, describing the item as ‘naff’

Others agreed the mistake could be damaging to younger children and were baffled that the t-shirt had been approved for production.

One person wrote: ‘Thing is. We try and try to teach correct punctuation to our children. Schools do the same. And then the poor sods are surrounded with ***** like this.’

Another said: ‘How on earth did that get through any kind of check by an adult? Surely our population is not that illiterate.’

A user speaking under the handle ‘onalongsabbatical’ urged others to push Asda to issue an apology for the mistake.

She said: ‘I’ve posted x2 on their FB page and tweeted them, I’ll revisit and keep at it when I’ve got a minute and report back if I get responses. Join in anyone?’

Another wrote: ‘I am sorely tempted to go to Asda this week and pin a notice on it saying ‘this is spelt wrong’.

One person attempted to defend Asda and suggested the shopper had interpreted the design wrong.

She said: ‘Obviously the t-shirt belong to Dad, and then has an instruction underneath.’