Can YOU work out what these three women have in common? Each has been lucky enough to avoid the same tell-tale sign of ageing – and experts reveal how you can do the same

On my 50th birthday last month, I found myself staring in the mirror, checking my hair for grey strands. Surely, I thought, there must be at least one by now?

But much to my friends’ envy, I have yet to spot a single one. Forgive me if I sound smug, but I’ve always taken my blonde hair for granted and had no idea so many friends dyed theirs.

Research shows most women find their first greys in their 30s: redheads at 30, brunettes at 32 and blondes by 35. So, why is it that some people, like me, simply don’t seem to go grey?

‘Strictly speaking, there’s no such thing as grey hair,’ says trichologist Tony Maleedy. ‘It’s white hair which we see as grey because it’s mingled with the darker hair on our heads.’ 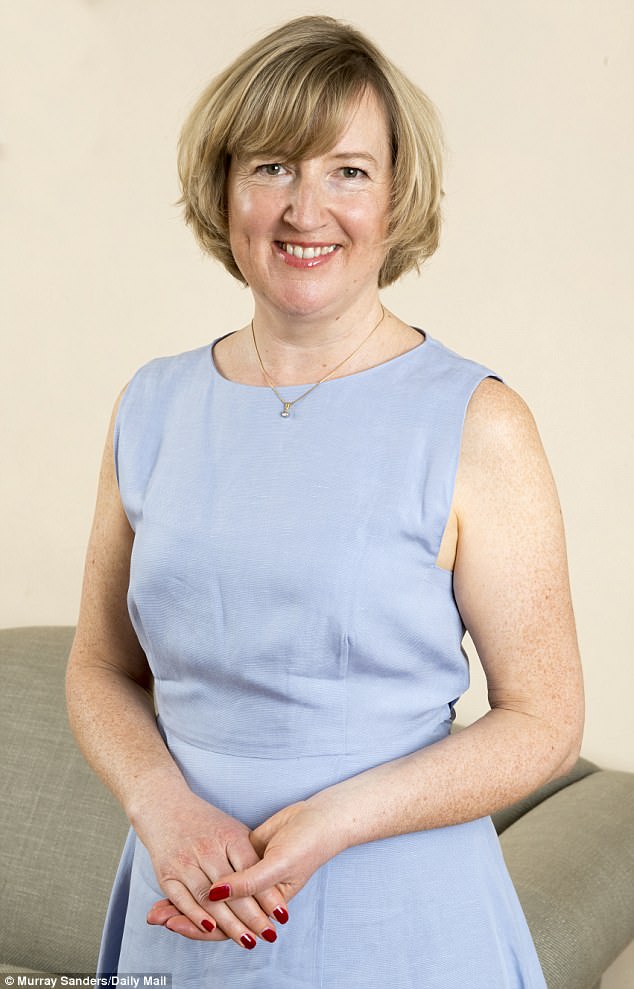 Fran Benson, 50, (pictured) has never found any grey strands in her hair. She spoke to experts to find out why some women maintain their natural hair colour as they age

He says our hair gets its colour from melanin, a natural chemical produced by pigment cells known as melanocytes, located in the root of each hair follicle. A grey hair is one that hasn’t been ‘painted’ by the melanocytes.

We inherit melanocytes from our parents, and different ones produce different types of melanin: eumelanin or pheomelanin, or a mix of both. Eumelanin is responsible for black and brown hair; pheomelanin produces red — and combinations of the two create shades in between. Blonde hair contains relatively small amounts of one or both.

Professor Des Tobin, from the centre for skin sciences at the University of Bradford, explains that as we age our melanocyte activity decreases.

He says: ‘The melanocytes may run out of steam while a hair is still on your head and growing, so you’ll find a hair shaft with a coloured end and a white root. Or the coloured hair may fall out, and then, when a new hair grows back, the melanocyte is no longer able to make pigment and the new hair is pure white.’

But there’s no rule for when this will happen: Professor Tobin has seen 90-year-olds with lots of natural coloured hair as well as teenagers with silver streaks. So, what’s the science behind it?

IT’S IN YOUR GENES

Experts agree that genetics play a major role in determining when you go grey. Professor Tobin says: ‘If someone isn’t grey by 50, I would be really surprised to hear their parents went grey at 20.’ The first gene known to affect greying was discovered in 2016. Known as Gene IRF4, it affects the production of melanin and the age when that process is ‘switched off’.

My mother spotted her first grey hairs in her 40s, and even now in her 80s she still has dark hair intermingled with grey. 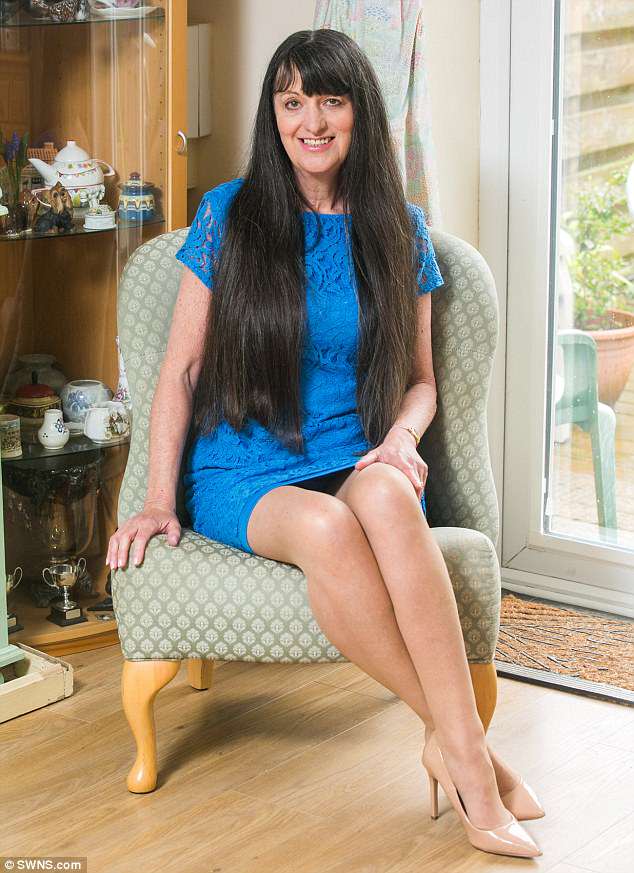 Sisters Louise Brogan, 43, and Amanda, 45, both have natural auburn hair. Their mother Janice has only a few strands of grey at 71, while their father Ronnie, who died aged 59, never went grey. They have relatives on both sides of the family who kept their hair colour into their 70s.

Louise, a social media consultant who is married with three children, says: ‘I never dye it: hairdressers are so complimentary about it and I don’t want to jinx it. Based on my family history, I think the likelihood of going grey is slim.’

Ethnicity also plays a part. Caucasians like me tend to go grey in their mid-30s, while East Asian people tend to be in their late 30s. Those of African heritage often get their first greys well into their 40s. One theory is that darker hair, which contains more melanin, protects the scalp from the sun’s rays in hotter countries, while lighter hair allows the skin to get more vitamin D in countries with less sunlight.

It’s no secret that a healthy lifestyle can keep you looking younger, but can it do the same with your hair? Expert Mr Maleedy suggests you can slow down — if not stop — greying. A diet rich in protein, wholegrains, fruit and veg and lots of water can make hair follicles more resilient.

Vitamins also play a part — specifically vitamin B complex. This vitamin is a range of B vitamins which do different things in the body including maintaining cell health and releasing energy, and studies show they also play an important part in maintaining hair colour.

They can be found in a wide range of foods — from meat and fish to dairy and vegetables. 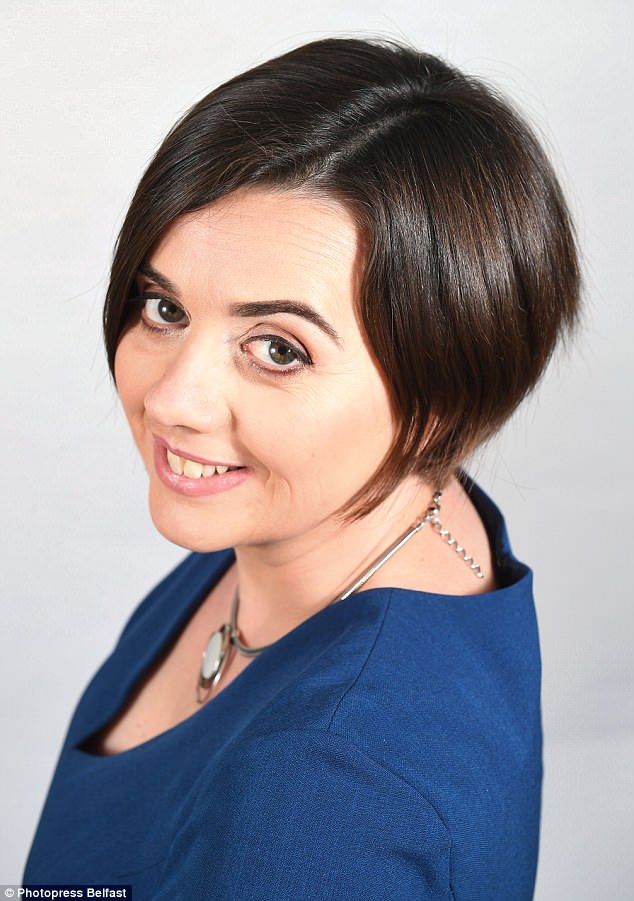 ‘Vitamin B complex is responsible for correcting chemical processes in the body,’ says Mr Maleedy. ‘When things start to go wrong there’s a lot of evidence that shows taking vitamin B complex can help restore hair colour, or prolong the lifespan of melanocytes.’

Susan Stowe, 67, a retired bookkeeper from Truro, is convinced nutrition, as well as genetics, has played a part in maintaining her dark brown, glossy locks. ‘I’ve never eaten processed foods or drunk alcohol, and I take coastal walks with my dogs. I’ve also never dyed my hair,’ she says.

Some maladies can turn hair grey. One of these is pernicious anaemia, an autoimmune disease that affects the body’s ability to absorb vitamin B12.

Then there’s vitiligo, which we normally associate with white patches of skin. It’s caused by not having enough melanocytes to produce the melanin required to give skin its colour.

Waardenburg syndrome is genetic and can cause hearing loss and affect pigmentation of hair, skin and eyes. It may cause a patch of white hair or premature greying — but affects only around one in 40,000 people. Fran (pictured) revealed she drank until her 30s and smoked during her late teens. Studies believe smoking could be linked to the signs of ageing

We’ve all heard stories about someone’s hair turning grey overnight when they’ve had a shock.

It supposedly happened to Marie Antoinette after she was captured during the French revolution. Similarly, it is said Sir Thomas More’s hair turned white when he was sentenced to death by King Henry VIII.

Pigmented hair cannot lose its colour once it’s grown, but, says Professor Tobin: ‘There is a condition called alopecia areata which targets pigmented hair but spares white hair — this has been seen as the scientific basis for hair going white overnight.’

Prolonged stress can play a part in going grey. Known as ‘oxidative stress’, this creates an imbalance between free radicals and antioxidants in the body. Free radicals are unstable molecules produced through normal processes in the body, as well as bad habits like smoking, drinking, eating and sleeping badly.

I have a fairly healthy lifestyle — but that wasn’t always the case. I chain-smoked through my late teens and drank enthusiastically until my 30s.

Several studies confirm the link between smoking and going grey (and for men, going bald, too) — it depletes your body’s vitamin stores, increases oxidative stress and ages the body.

I haven’t had a cigarette in over 25 years and drink only occasionally. I eat lots of vegetables, walk every day, practise yoga and take vitamin B complex, vitamin C and omega-3 fish oil capsules.

So, although I didn’t look after myself in my younger years, it looks like I may have reversed the damage of my past.