Does a real Christmas tree make you middle class? Mumsnet user claims a genuine fir is always a mark of wealth and accuses people of being ‘snobby’ to working class people who go artificial

A woman has provoked a fierce debate over Christmas trees as a status symbol, after declaring that a real fir indicates you’re middle class.

Posting anonymously on Mumsnet, the Scottish woman explained she grew up working class and has always had an artificial Christmas tree, while she’s only known people who are wealthier to own real festive firs.

She said a discussion about Christmas trees at her workplace revealed ‘snobbery’, when some argued fake trees are ‘terrible’ for the environment and colleagues revealed plans to ‘cut down a tree on their estate’.

Responses seemed to prove her point with most people who described themselves as middle class people admitting they’ve always had a real Christmas tree, while  working class contributors explained they have a preference for artificial Christmas trees. 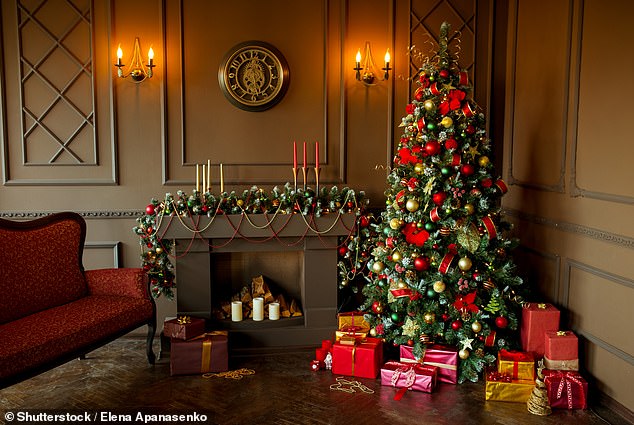 An anonymous woman who grew up in Scotland, has sparked a debate about judging others based on their choice of Christmas tree (file image) 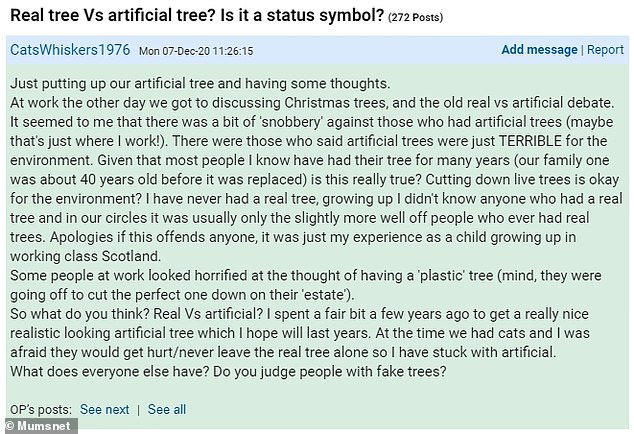 Posting on Mumsnet, the woman explained she didn’t know anyone who wasn’t wealthy that owned a real Christmas tree

Sparking the debate, the woman wrote: ‘Just putting up our artificial tree and having some thoughts. At work the other day we got to discussing Christmas trees, and the old real vs artificial debate.

‘Given that most people I know have had their tree for many years (our family one was about 40 years old before it was replaced) is this really true? Cutting down live trees is okay for the environment? I have never had a real tree, growing up I didn’t know anyone who had a real tree and in our circles it was usually only the slightly more well off people who ever had real trees.

‘Apologies if this offends anyone, it was just my experience as a child growing up in working class Scotland. Some people at work looked horrified at the thought of having a ‘plastic’ tree (mind, they were going off to cut the perfect one down on their ‘estate’).

‘So what do you think? Real Vs artificial? I spent a fair bit a few years ago to get a really nice realistic looking artificial tree which I hope will last years. At the time we had cats and I was afraid they would get hurt/never leave the real tree alone so I have stuck with artificial. What does everyone else have? Do you judge people with fake trees?’

A stream of responses from middle class users revealed they’ve always had a real Christmas tree.

One person wrote: ‘Middle class always had a real tree. I think there is a lot of snobbery. I love the smell of a real tree. Apparently an artificial tree has to be used for ten years before it is better for the environment than real ones, and more people I know with artificial change them more frequently.’

Another said: ‘Yes I agree that real vs artificial Christmas tree is very much a snobbery thing. I come from a middle class family and growing up we always had a real Christmas tree.

‘My parents definitely made comments to suggest that middle class families have real Xmas trees. Since leaving home, I’ve always had a real tree.’

The majority of responses from working class people said they’ve always had a preference for artificial Christmas trees.

One wrote: ‘Working class and I have an artificial one. If you keep your artificial one going indefinitely, I don’t think they are terrible for the environment – no more terrible than buying mounds of plastic toys, which as a child-free household, we don’t.’

‘We always had an artificial one growing up as couldn’t afford a real one every year (and it lasted over 20 years!) I can’t be a**** with a real one, so although me and DH could afford to, we just have a fake one and that works for us. I have found some people quite snobby about it too,’ another said.

Despite the debate, many people admitted they don’t judge anyone based on their choice of Christmas tree and argued childhood experience influences purchasing decisions more than social class.

One person wrote: ‘We get a real tree, I love the act of going to choose it as a family every year and love the smell. I doubt anyone walking past the house knows what kind we have, so can’t really be a status symbol. I think it’s just personal preference, I don’t really care what kind anyone else has in their house.’

‘We’ve had ours for ten years, the lights come attached so there’s no faffing with knotted ones, it’s nice and neat and still looks healthy come January! I think real ones look lovely but not so much I’d want one.’