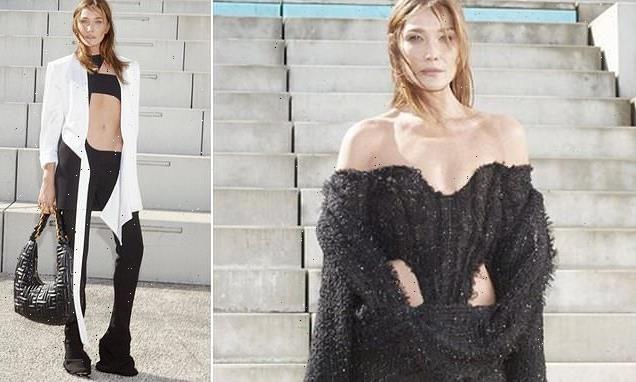 First lady of fashion! Carla Bruni, 54, shows off her enviable figure in a crop top and off-the-shoulder dress in new Balmain campaign

The mother-of-one, 54, who is married to disgraced politician Nicolas Sarkozy, who was France’s president from 2007 to 2012 posed in two bold outfits in the new campaign for the French designer.

Carla, who was a sought-after model in the 80s and 90s before becoming a singer in the noughties, showed she has not forgotten how to work the camera.

Sporting two sultry pose in snaps shared on her Instagram account, the French-Italian beauty thanked Olivier Rousteing, Balmain’s Creative Director, for having her on the campaign. 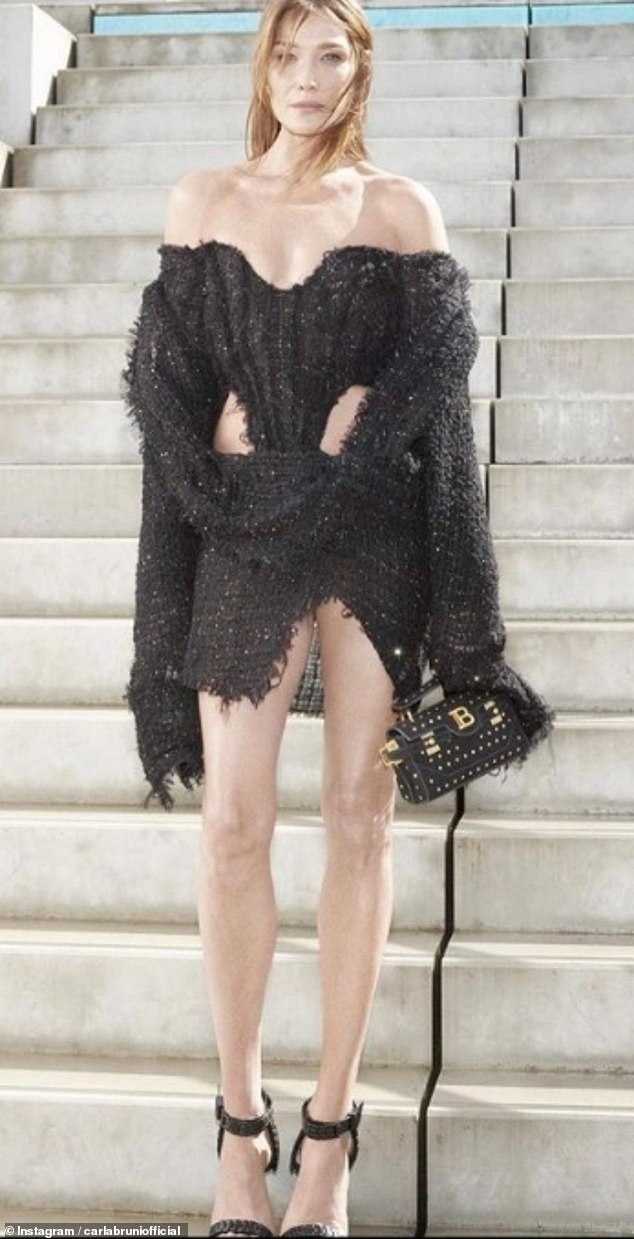 One snap shows the 54-year-old flashing her toned mid-rift in a body-hugging black cut-out jumpsuit.

The flared trousers reached down to her flat shoes, a look that has been prized by celebrities recently.

With just a brassière covering her cleavage, Carla flashed plenty of skin in the revealing garment.

She wore the jumpsuit with a white asymmetrical jacket and a leather bag from Balmain. 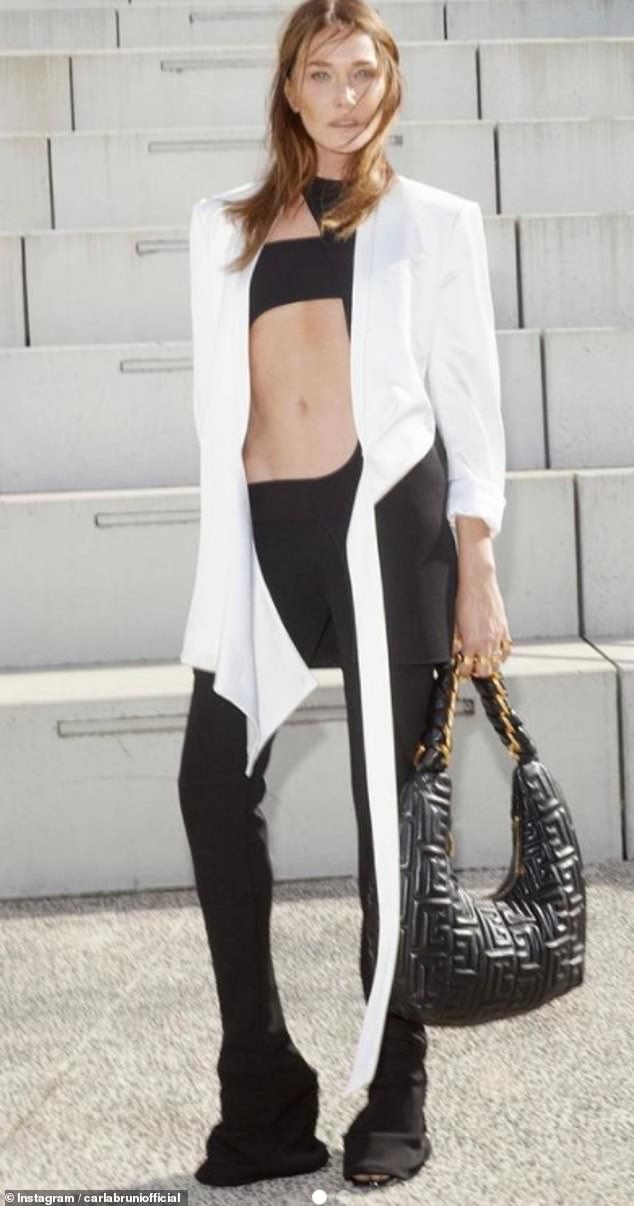 In the second picture, the former first lady modelled a very short dress with an asymmetrical hem and cut-outs at the navel.

The off-shoulder woolen number showed off Carla’s toned legs, made even longer by a pair of heels.

She wore it with a Balmain clutch bag in black leather with golden studs.

Carla’s makeup was minimal, highlighting her natural beauty, and she wore no accessories to keep the focus on the clothes.

Her hair was styled straight, and like the rest of the look, there was minimal flourish to it.

A week ago, the mother-of-one teased a ‘secret project’ with Balmain on Instagram, where she shared a video of her dancing, modelling several pieces by the designer. 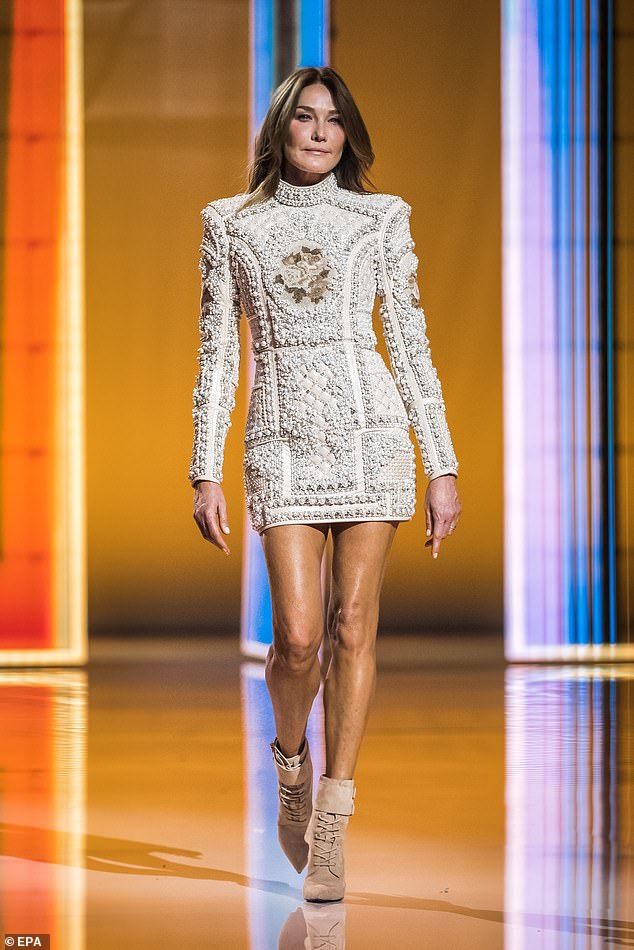 Back in September, Carla turned heads at Paris Fashion week by wearing an embroidered mini-dress at the Balmain show

At Paris Fashion Week last September, she turned head on the Balmain catwalk wearing a embroidered mini-dress bedazzled with pearls.

She is a regular at French fashion events, attending both the YSL and the Thierry Mugler shows during the week-long fashion event.

She was also among the first one to pay homage to the late Thierry Mugler when the designer died in late January in Vincennes, France. 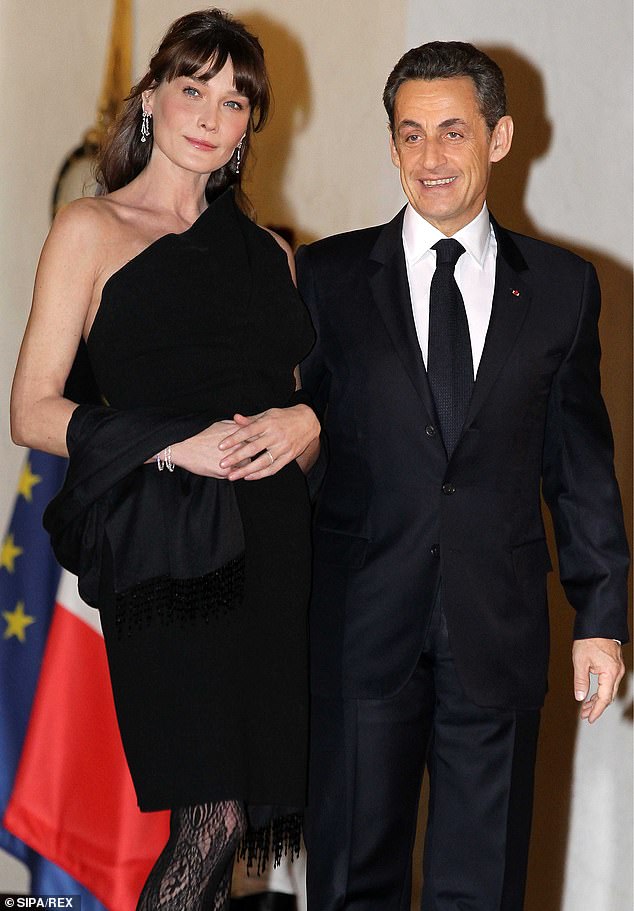 Sharing a heartfelt message on Instagram, she wrote in English: ‘So many memories … I guess you couldn’t wait to join the stars and go dress the Angels and the Gods but it is a sad day for all of us below. All my thoughts to your loved ones.

She added in French: ‘Dear Manfred, you made her dream so much, we’ll never forget.’

Carla also posted a video of herself modelling Mugler on the catwalk in archive footage from the 90s.