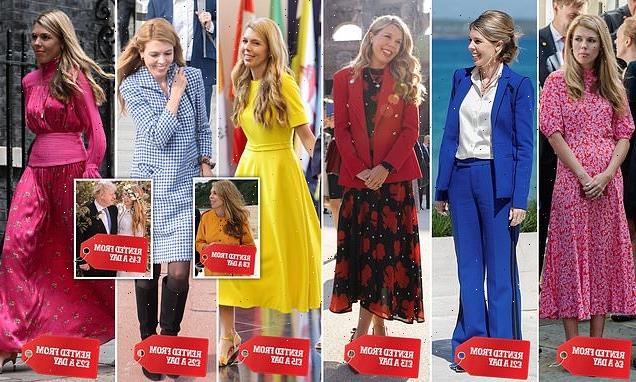 First lady of the hired high fashion: Carrie Johnson entered Downing Street in a rented dress… and you can hire the one she wore yesterday, too! KATE WILLS looks back at the outfits Boris Johnson’s wife sported during his time in power

We’ve all dressed to make an entrance before, but Carrie Johnson proved yesterday that in the right outfit you can make a memorable exit, too.

The departing first lady waved goodbye to No 10 in a fuchsia, waist-cinched, maxi-dress from British label Harmur. The brand’s tagline? ‘No sexier way to walk away.’ Indeed. There was also no savvier one.

The £495 dress sold out within hours of Carrie’s appearance — just like the pink Ghost tea dress she wore on her arrival at Downing Street in 2019.

But the good news is that both of these entrance and exit dresses, like so many of Carrie’s outfits in her three-year tenure at No 10, are available to rent (the Harmur dress is £23.25 a day for a four-day minimum period from Hurr, hurrcollective.com).

Whatever you think of her husband’s record during his three years and 44 days in office, Carrie’s legacy is her quiet fashion revolution, championing a rental market set to be worth $2.08billion globally (£1.82billion) by 2025.

‘I think it’s inspiring that Carrie has chosen to rent many of her outfits during her time as the PM’s wife,’ says Sacha Newall, founder of MyWardrobeHQ (mywardrobehq.com), which provided her Christos Costarellos wedding dress last year.

The departing first lady Carrie Johnson waved goodbye to No 10 in a fuchsia, waist-cinched, maxi-dress from British label Harmur (left). The £495 dress sold out within hours of Carrie’s appearance — just like the pink Ghost tea dress she wore on her arrival at Downing Street in 2019 (right) 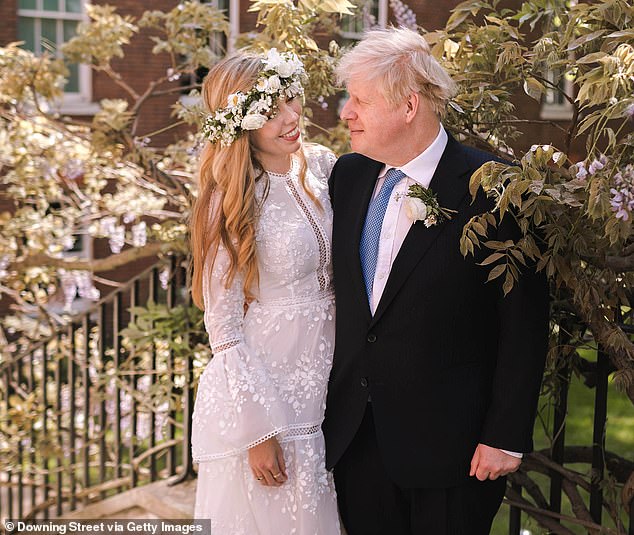 Carrie’s Christos Costarellos wedding dress costs £2,870 new but she hired it from MyWardrobeHQ for £45 a day

‘She always looks striking without being too “look at me”.’ She chooses to rent because it’s more sustainable and I think that’s really humbling.’

Sacha says ‘The Carrie Effect’ saw an 800 per cent increase in people looking to rent a wedding dress from the site.

While it would’ve been easy to dismiss it as a PR stunt amid the belt-tightening of the pandemic (the gown costs £2,870 new, but Carrie hired it for £45 a day), it was just the pinnacle of Mrs Johnson’s rental odyssey.

Indeed, there have been many high-profile hires. She rented a 1960s-style houndstooth mini-dress from Eponine London to meet the Queen at Balmoral in 2019 and dressed her baby bump in a rented Clary & Peg floral dress to meet Camilla, Duchess of Cornwall in 2021.

Then there was the upcycled satin yellow maxi by Franks London she wore on a trip to the UN General Assembly; and, of course, the Vampire’s Wife dress she wore for the Platinum Party at the Palace in June.

Bags from Hurr and MyWardrobeHQ were seen arriving in Downing Street before the G7 summit in Cornwall in 2021, when Carrie wowed world leaders in a hot-pink Roksanda dress, an electric blue Amanda Wakeley trouser suit and a floral maxi dress from Damselfly London — all rented.

There have been many high-profile hires such as the 1960s-style houndstooth mini-dress from Eponine London she wore to meet the Queen at Balmoral in 2019 (pictured right) which cost £2,100 but was available to rent from £225. A much more affordable option was her yellow Claire Mischevani dress (pictured left) which she wore in Rwanda in June and was available from just £15 on MyWardrobeHQ

Even when she’s paid for her dresses, as with that Harmur number, she makes a statement.

‘Carrie often champions small, sustainable British labels,’ adds Sacha. She has shown how busy, modern women really aspire to dress: in flattering, statement pieces which look and feel a million dollars — but cost a fraction of that to wear.

But for a PM’s spouse it also solves the problem of being seen in the same outfit twice. Perhaps Britain’s new ‘first husband’ Hugh O’Leary is taking notes.