The Amazon basin, one of the planet’s largest stores of carbon, is beginning to release more carbon-dioxide to the atmosphere than it absorbs as deforestation and fires spread, potentially accelerating global warming.

An international research team confirmed the shift in emissions using 590 aircraft surveys that captured changing CO2 and carbon monoxide levels in the lower troposphere above four Amazonia sites between 2010 and 2018. The results were published in the journal Nature on Thursday. 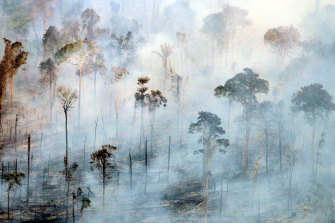 Deforestation and bushfires are changing the climate in parts of the Amazon, and also switching the basin from being a carbon sink to contributing to global carbon-dioxide levels.Credit:AP

The sites were able to capture changes across the basin, which is home to the world’s largest expanse of tropical rainforest. Over the nine years, the region was found to be releasing about 410 million tonnes of carbon a year from fires, with only about 120 million tonnes of that being removed by the region’s plants.

“This means that, although the forest is still taking up an enormous amount of carbon from the atmosphere, it is acting as a source,” said Lucas Gatti Domingues, a carbon cycle scientist and one of the paper’s co-authors.

“The more we see changes on the temperature, and on the precipitation cycle, the more we are likely to see increased natural fires and trees mortality, which enhances deforestation. This creates a cycle which is leading the forest to extreme stress, mainly on its eastern region.”

Pep Canadell, a senior CSIRO researcher and head of the Global Carbon Project who was not part of the study, said the Amazon had long been considered to be either carbon neutral or a slight sink in its ability to take up more CO2 than it gave off. This study and some recent ones point to the region becoming a carbon source.

“It is a switch – that’s a new game,” Dr Canadell said. “It’s the potential for change [globally] because of the large carbon stocks in that part of the world.”

The paper noted the region’s biomass both above and below the surface amounted to 123 billion tonnes of carbon. If released, that could amount to about 450 billion tonnes of CO2, or about 860 times Australia’s annual emissions.

Dr Canadell said while it is too early to tell whether so-called tipping points have been reached, the process of clearing rainforest for crops or cattle grazing, the resulting loss of local rainfall and increased chance of forest fires could compound the problem.

“There’s a very real possibility that we could be entering self-reinforcing loops that prevent the forest recovering to what it used to be,” he said, adding it would “happen in Australia if fire frequency increases”. 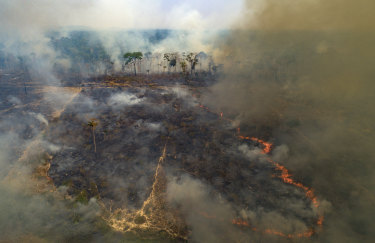 Large areas of the Amazon rainforest have burnt in recent years, often due to farming and land-clearing. Scientists fear too much fire in the “lungs of the planet” could trigger a tipping point of irreversible landscape change from jungle to savannah. Credit:AP

The Nature paper noted that the south-eastern site in the Amazon, home to the largest amount of deforestation among the regions monitored, had already become a net source of carbon emissions.

One change is the climate is drying with the loss of forest cover. The paper noted that 25-35 per cent of total rainfall was locally sourced through evapotranspiration of moisture from plants to the atmosphere. Over the past 40-50 years about 17 per cent of the forests had been cleared, creating what the paper described as a “cascade effect”.

“Removal of forests causes an increase in temperature and reduces evapotranspiration, and has been shown to reduce precipitation downwind of deforested areas,” the paper said. The dry season, from August to September, had the biggest drop in rainfall.

Dr Domingues said compared with global trends, the eastern Amazon’s region has warmed as much as 0.6 degrees per decade. “This is around three times the rate we are seeing globally and is causing severe changes on the Amazon’s seasons,” he said.

“Reaching the so-called tipping point or not, what I can affirm is that the Amazon is a vital biome with a crucial role in a global scale and we should start to treat it as it is,” Dr Domingues said.

“Studies like this remind us that we need to act, and act fast.”

The paper’s release comes as international agencies report that last month was the world’s fourth or fifth warmest on record. The US National Ocean and Atmospheric Administration, though, noted that land temperatures alone were 1.42 degrees above the 20th century average, making it the hottest June on record, beating the peak set in June 2019.