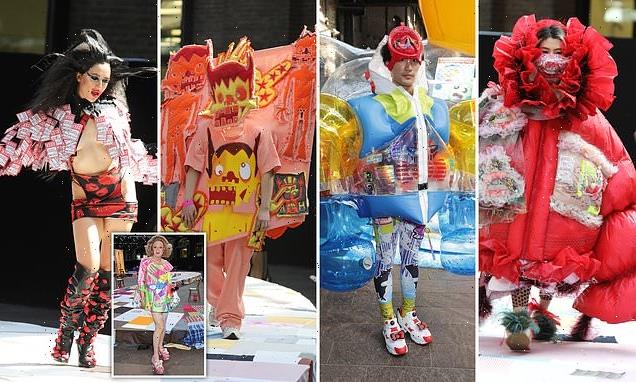 Graduating during a global pandemic hasn’t affected the creative juices of students at Central Saint Martins, if the surreal outfits modelled on the runway at its annual fashion show are anything to go by.

BA fashion grads at the prestigious London art school – which counts Alexander McQueen amongst its alumni – showed off their eccentric creations – including a costume fashioned out of swimming inflatables, anime-inspired characters and forest-themed garments – in the show at Granary Square on Tuesday.

Amongst those watching the student couture theatricals unfold on the catwalk was Grayson Perry, dressed in a colourful patterned above-the-knee dress and strappy cerise sandals adorned with pom-poms.

The artist had tweeted with glee earlier: ‘Finally off to a DO. Chance to break out the fancy goods.’ 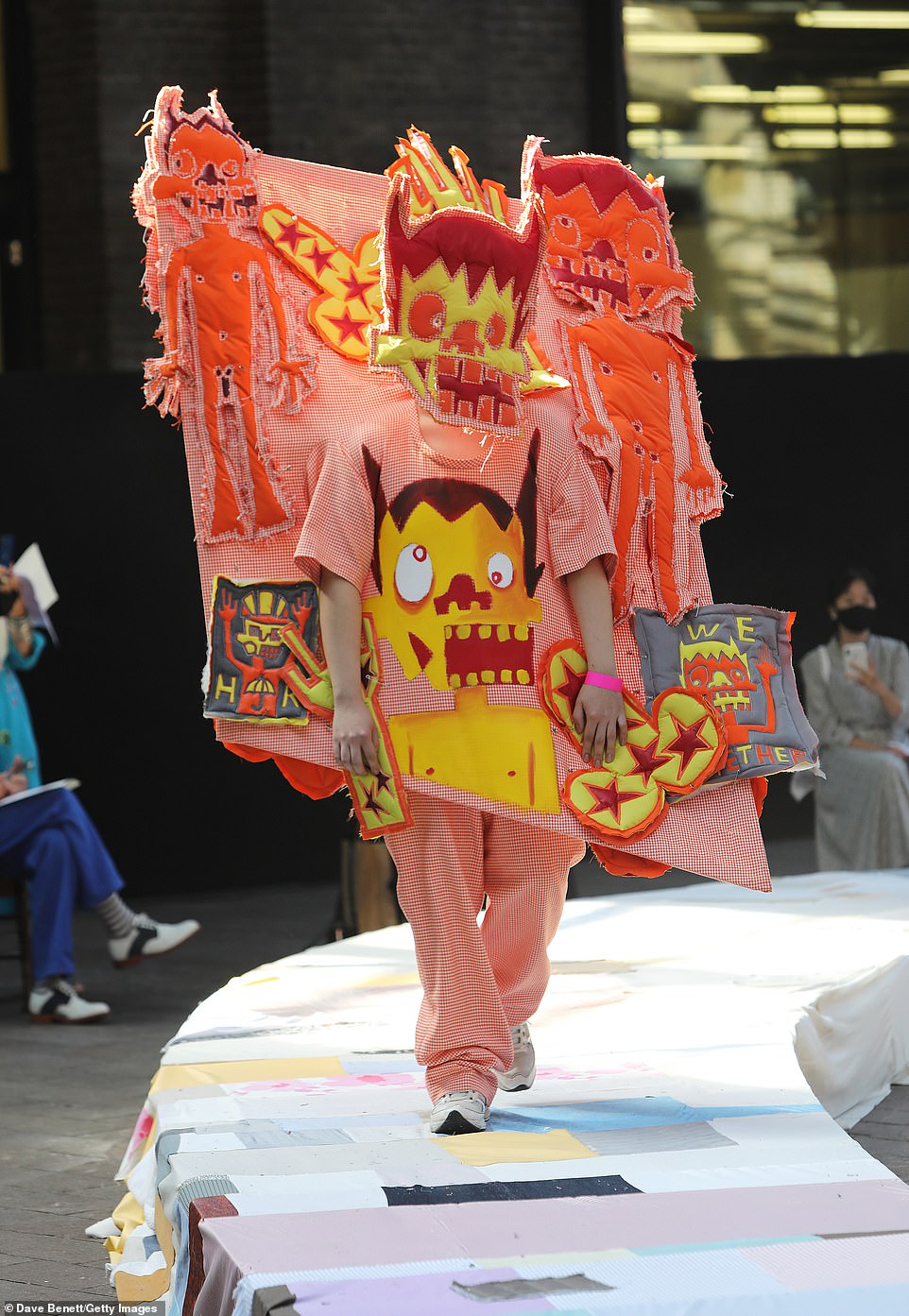 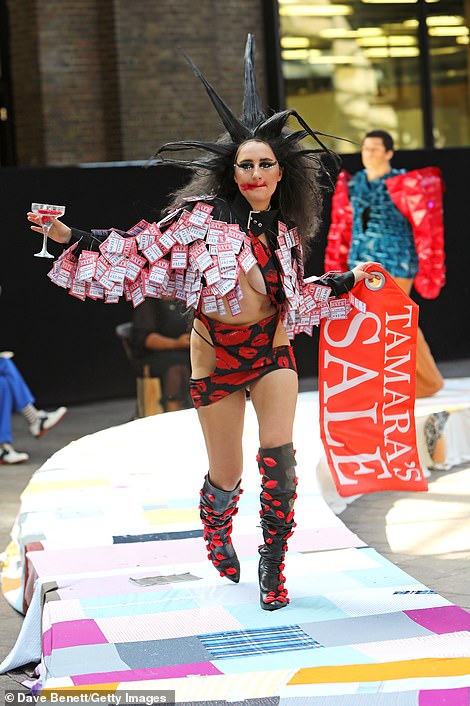 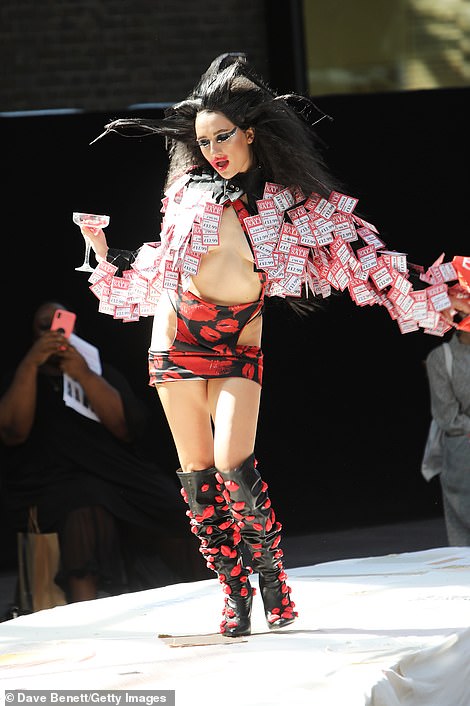 High price of fashion? This student used red sales tags to make a statement. The model staggered, glass  in hand and lipstick smeared, down the runway in knee-high boots 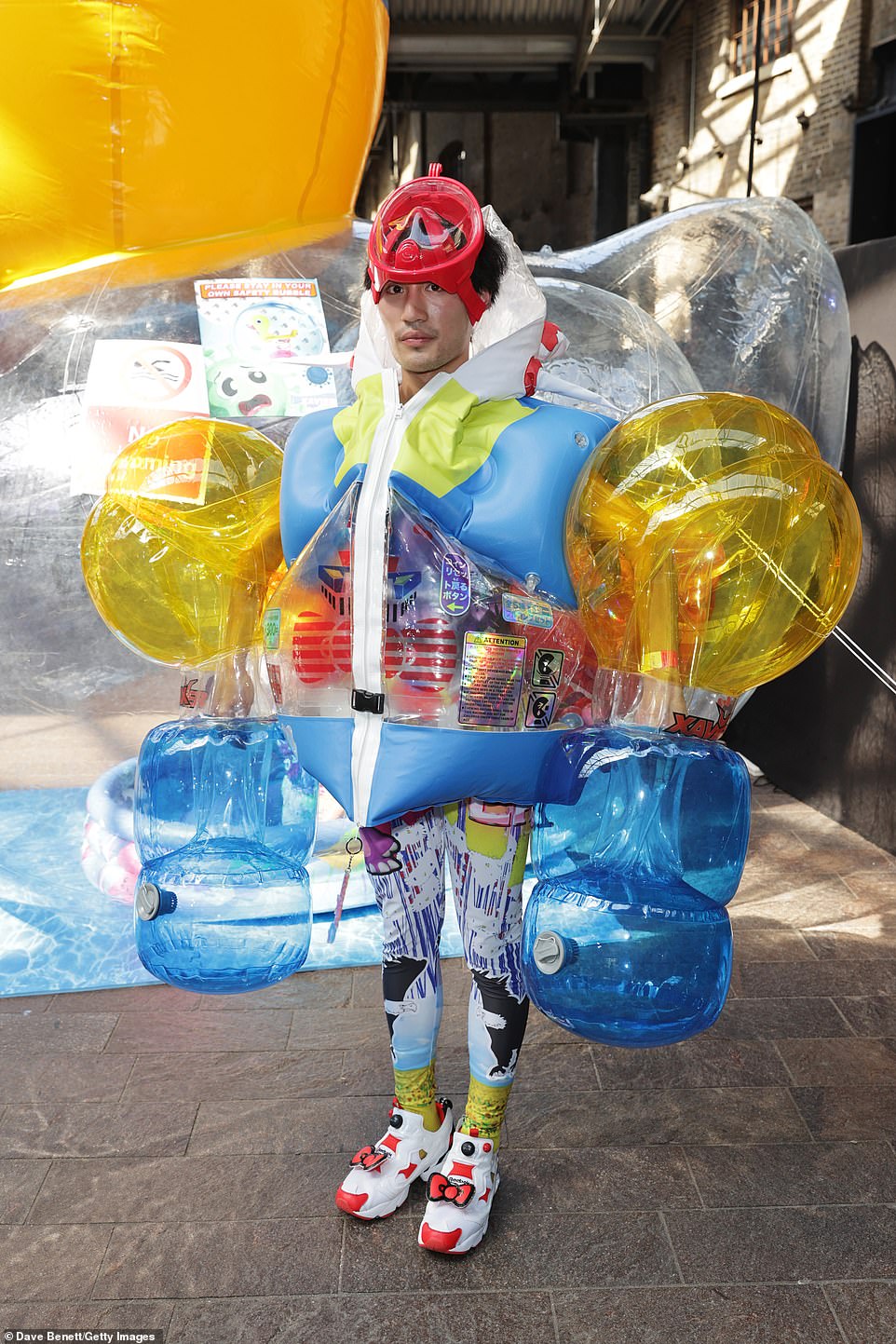 A whirl of mind-bending sartorial creations hit the catwalk including this inflatable outfit, which was teamed with Minnie Mouse-esque trainers and anime character lycra 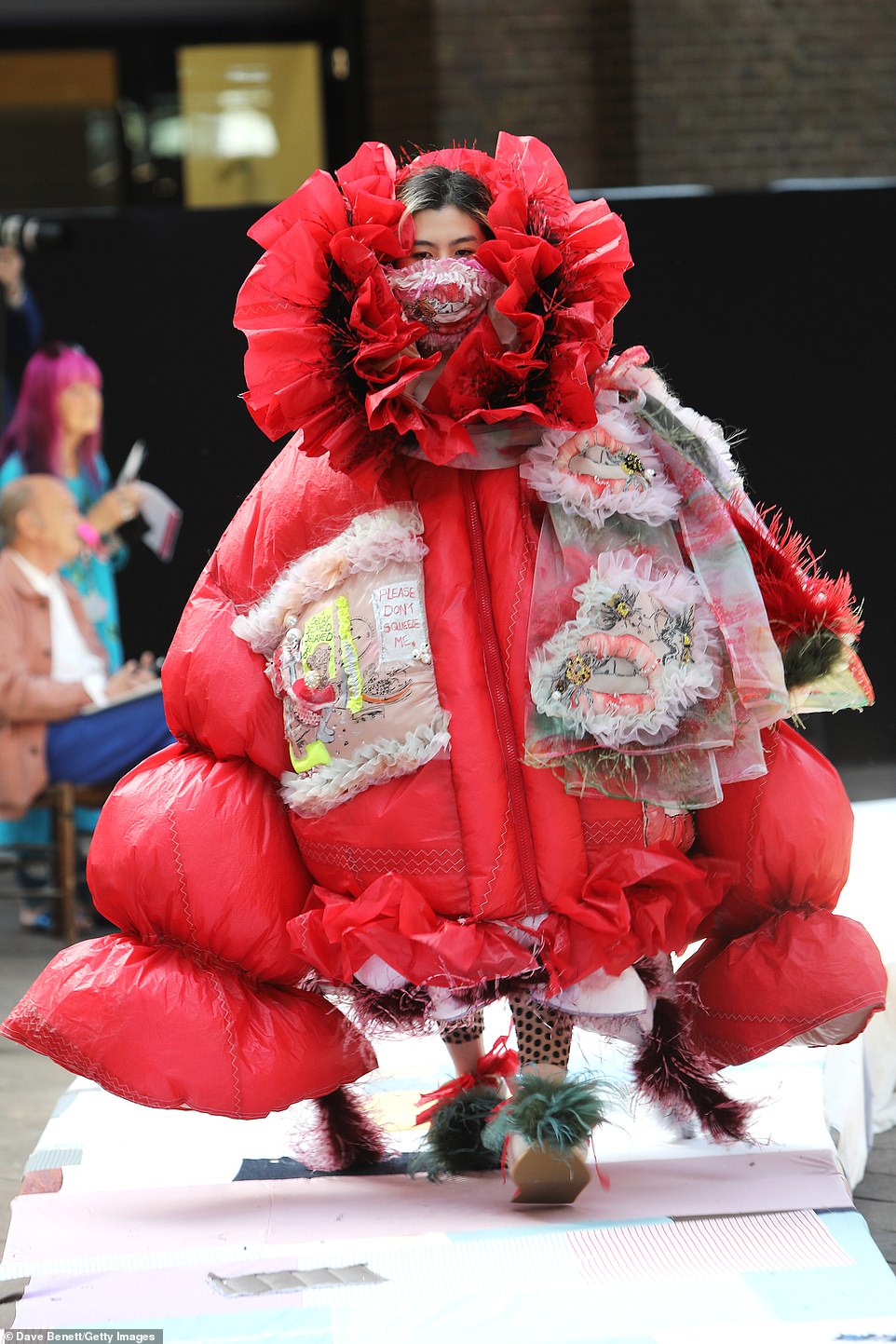 Some of the fashion proved more voluminous, with inflatables appearing as clothes and this elaborate take on the puffa jacket filling much of the runway 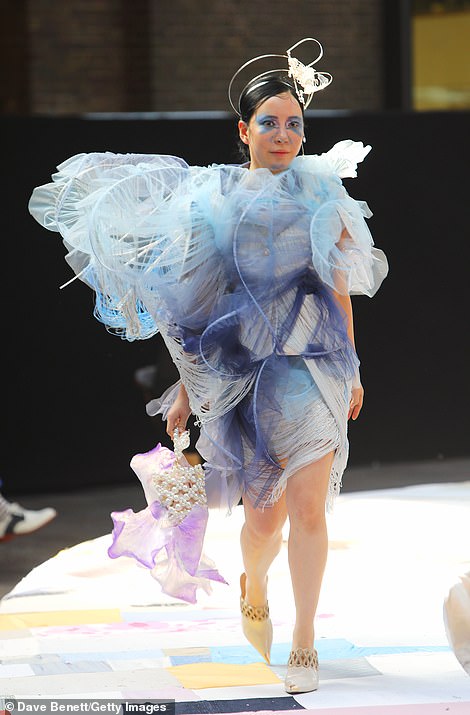 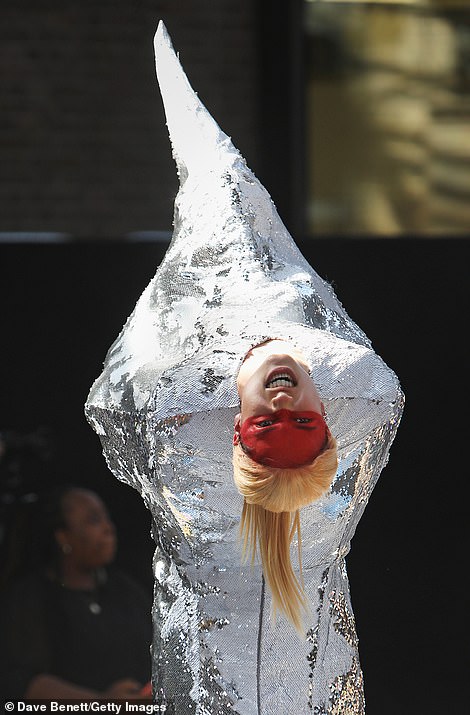 Graduates at the prestigious London art school showcased their degree collections. Right: An eye-catching glittering wraith-like outfit was among the outfits being modelled 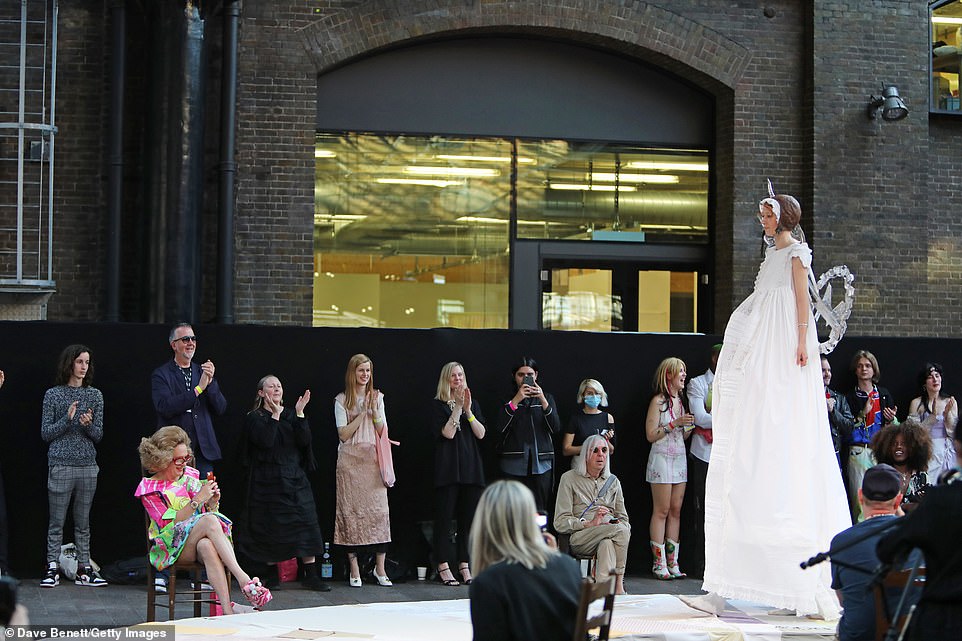 A 10ft angel graces the catwalk as artist Grayson Perry snaps a photo on his phone. The delicate white garment included celestial wings and appeared to need two models to show it off

The graduate showcase, which was streamed live to reach a wider audience due to Covid restrictions, included an eye-catching glittering wraith-like outfit and a staggering model, glass in hand and lipstick smeared, wearing a risque black dress covered in sales tags.

Elsewhere, a 10ft angel graced the catwalk; the delicate white garment included celestial wings and appeared to need two models to show it off – with one standing on the other’s shoulders.

Alongside Perry, model Winn Austin, Great British Sewing Bee star Esme Young and London socialite Michael Costiff also made it to the FROW while Catherine McMahon, Director International of Artistic Relations at L’Oreal Professionnel, was among the big names from the fashion industry involved. 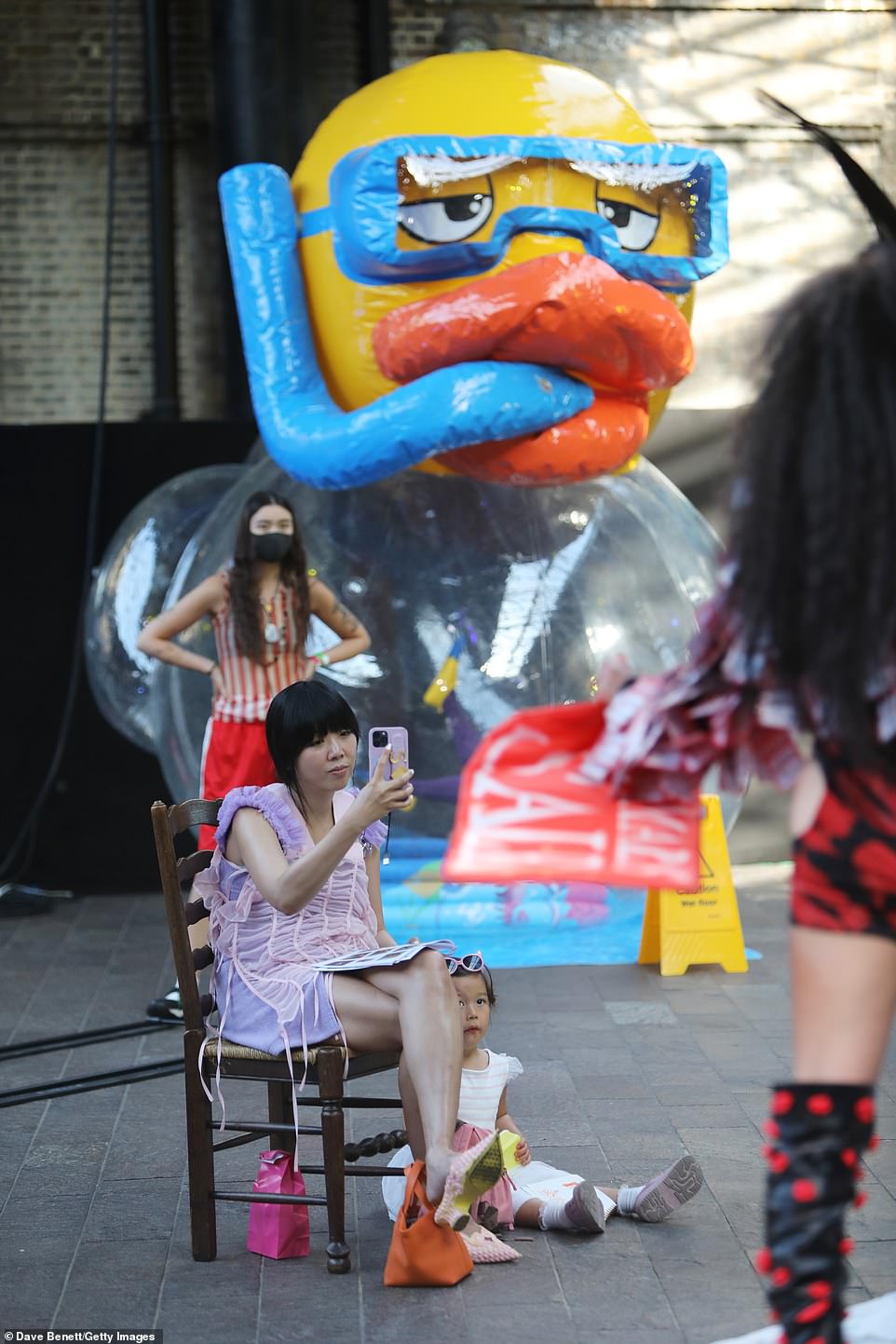 Duck dress! A large inflatable snorkelling duck became a wearable item of fashion – with a model sitting inside the outfit’s central globe 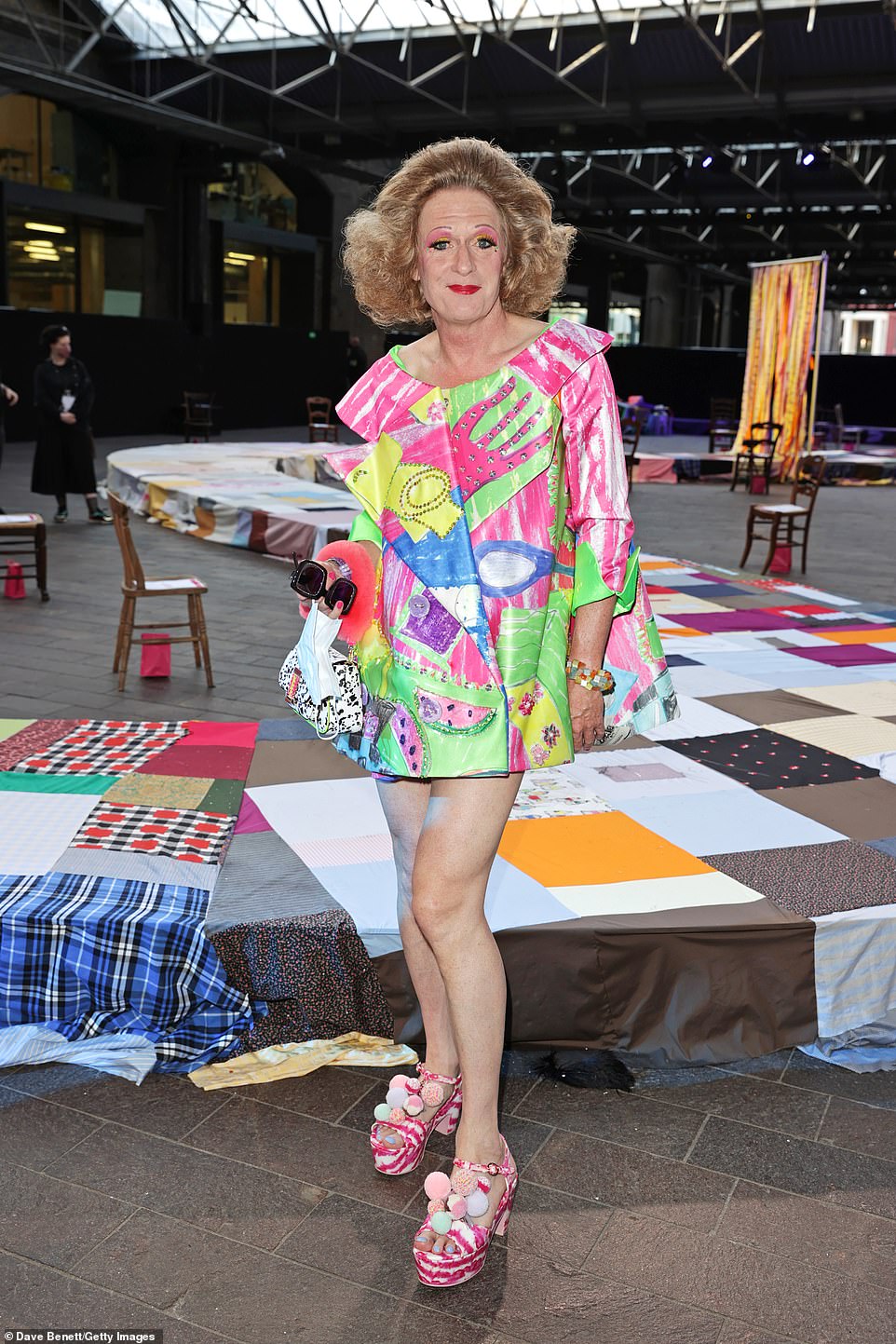 Out out: Grayson Perry tweeted his delight at finally going to a ‘do’ – and the artist was happy to dress up for a seat on the FROW 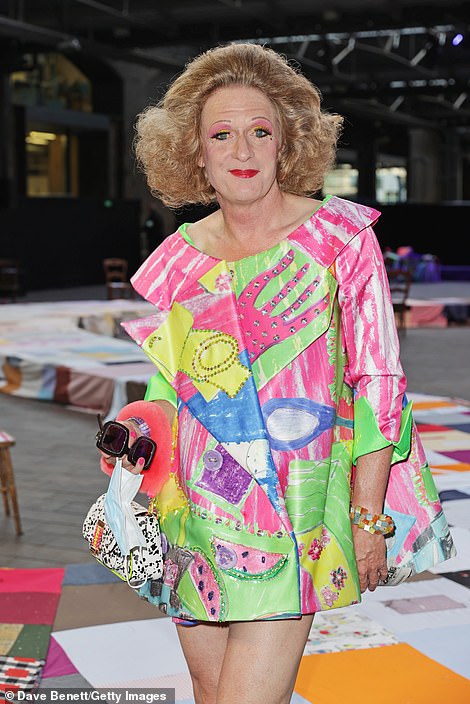 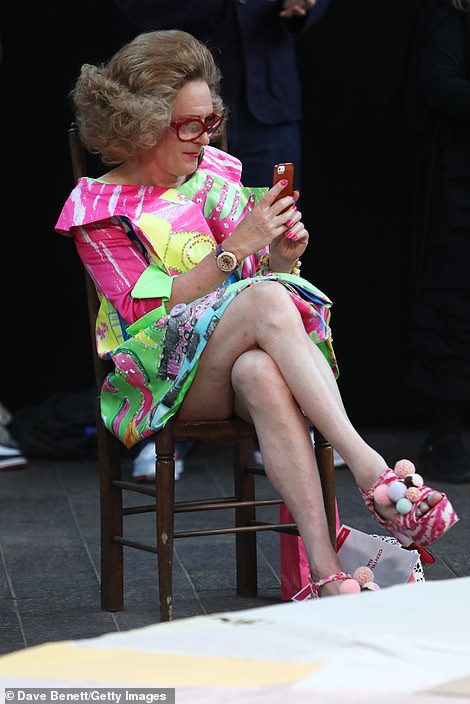 Perry dressed up in a colourful patterned dress and strappy cerise sandals adorned with pom-poms, and was later spotted taking photos of the outfits from a socially-distanced front row seat 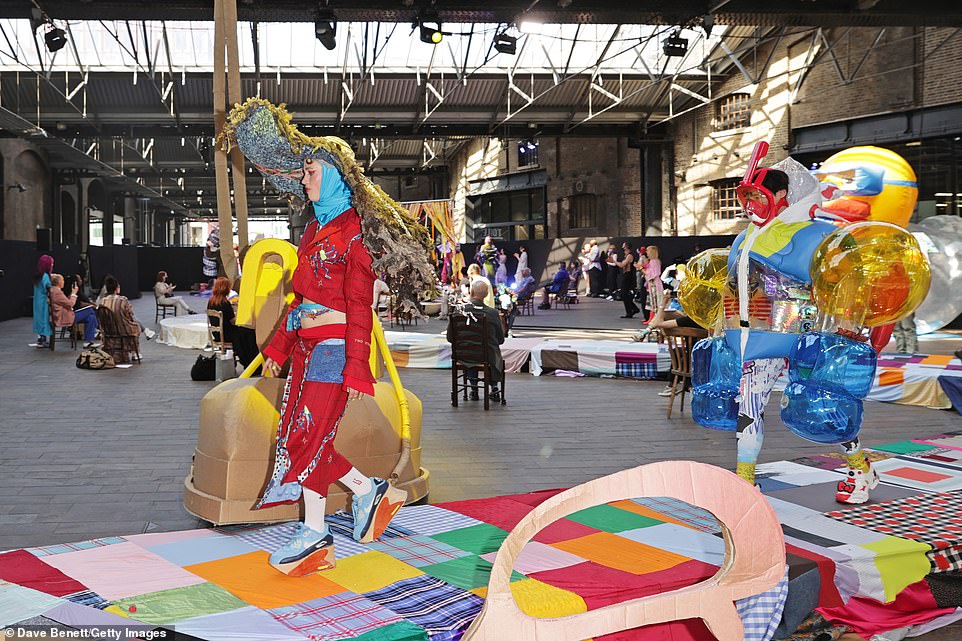 2021 didn’t disappoint: the graduate showcase has seen some of the world’s biggest designers previously exhibit – including Sarah Burton, John Galliano and Stella McCartney 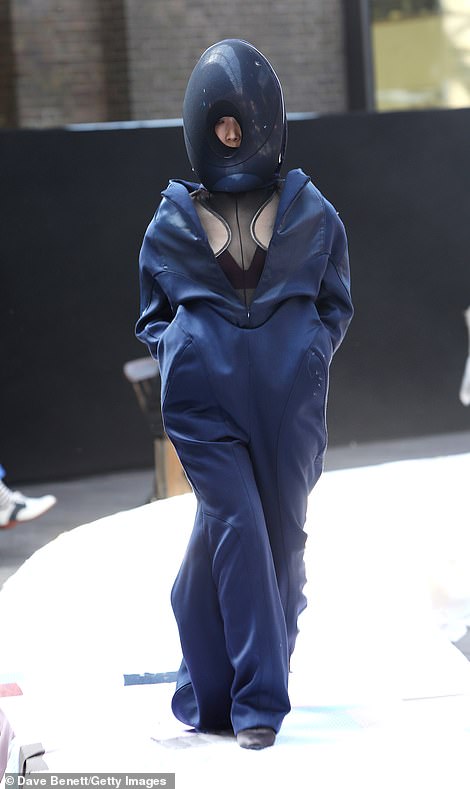 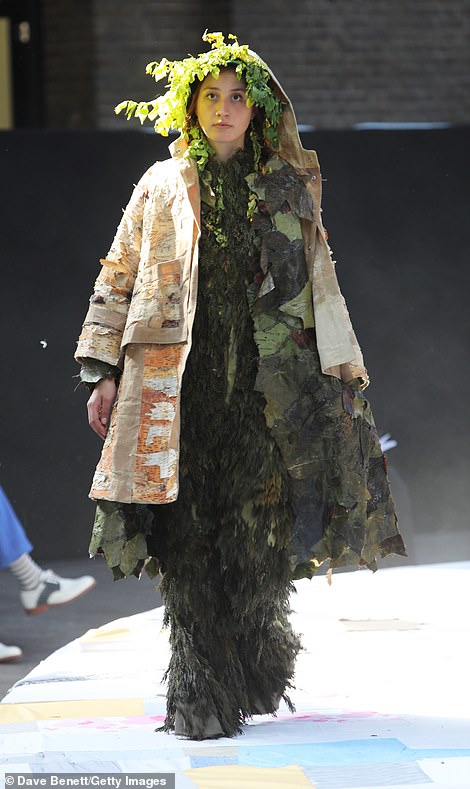 The outlandish designs are the handiwork of the latest graduates from the London art school, which  counts Alexander McQueen amongst its alumni. Right: a model in a forest-themed all in one glides down the runway

It is considered a pivotal event for wannabe designers – the pinnacle of a years’ worth of work honing each piece – and previous students have included Sarah Burton, John Galliano, Stella McCartney and Bruce Oldfield.

A young Alexander McQueen was famously catapulted to style stardom after stylist and fashion editor Isabella Blow bought his entire graduate collection after seeing the show.

The show is a chance for the young design talent at the renowned college to show off their final collections to the fashion press and potential employers and buyers in the industry – and it rarely disappoints as a visual spectacle. 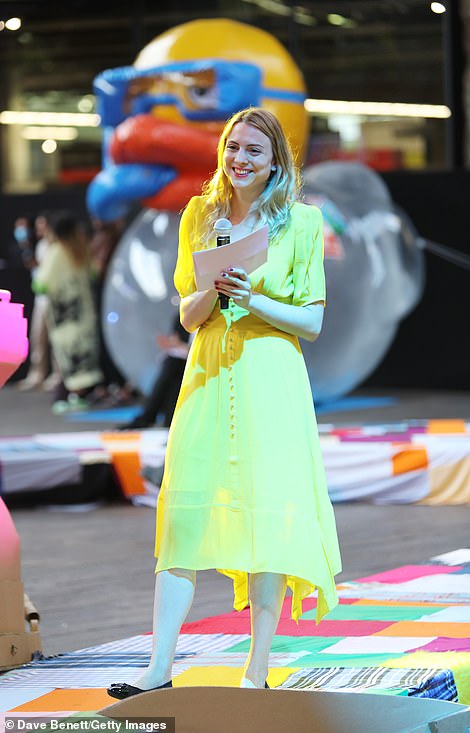 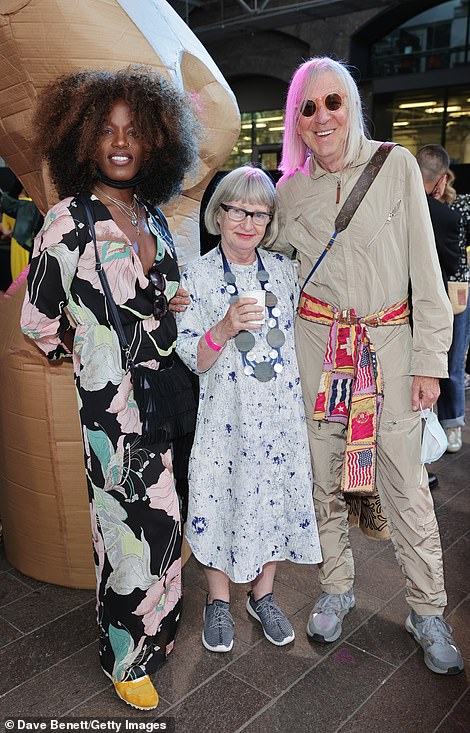 Catherine McMahon, Director International of Artistic Relations at L’Oreal Professionnel, was among the big names from the fashion industry involved in the graduate show. Right: (pictured from left) Model Winn Austin, Great British Sewing Bee star Esme Young and London socialite Michael Costiff also made it to the FROW