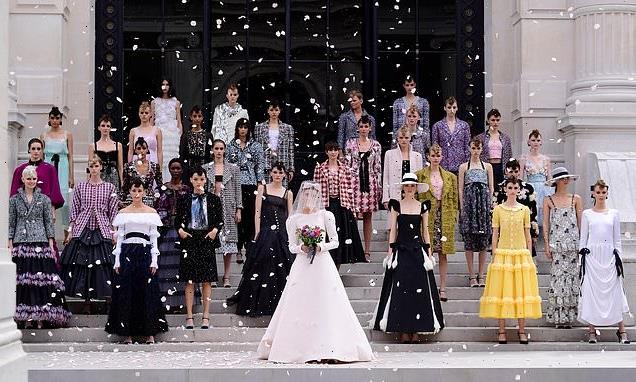 And the bride wore… Chanel! A retro-inspired wedding dress is the showstopping final look as Daisy Edgar-Jones and Sofia Coppola turn out for the French fashion house’s Haute Couture Show in Paris

It was a feast of exquisitely designed gowns and signature tweed at the Chanel Haute Couture Show in Paris today.

In keeping with the tradition of haute couture fashion shows, the final design sent down the runway was a retro-inspired wedding gown, complete with chic veil and a bouquet of flowers which was thrown back over her shoulder at the end of the runway.

The backdrop for the show was equally theatrical. It took place in the courtyard of the Palais Galliera, the museum of fashion and fashion in Paris’ trendy 16th arrondissement.

Models emerged between two columns and swished and sashayed down the impressive staircase, before making their way in a loop past the coolly fashionable front row.

It marked a return to Haute Couture shows for the French fashion house, which was forced to go digital with its January showcase due to Covid-19 restrictions. 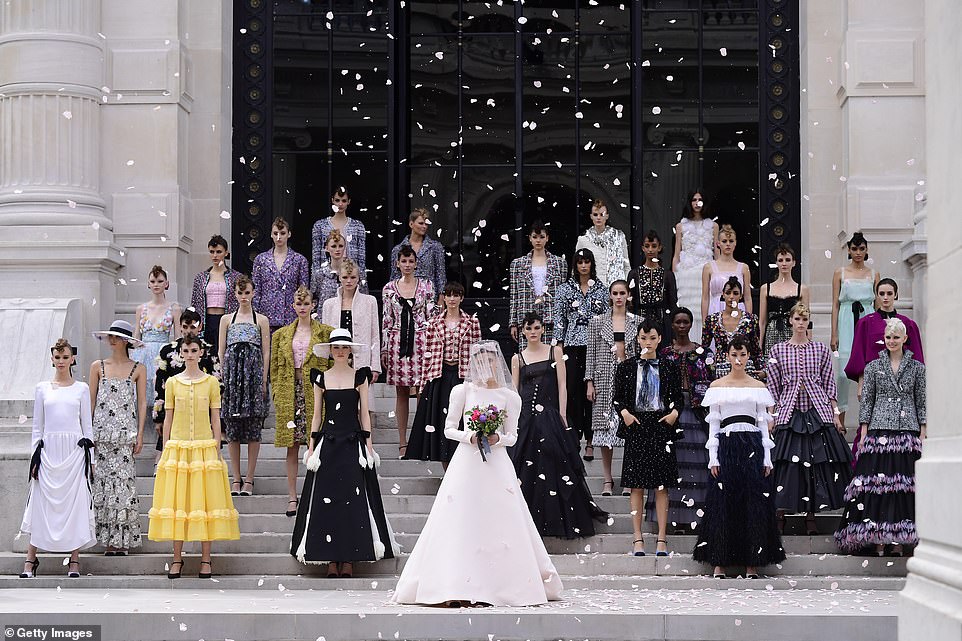 Spectacle: The show was wedding-inspired, with the models all lining up to show off their designs at the end 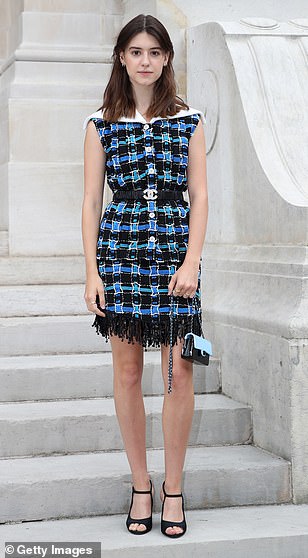 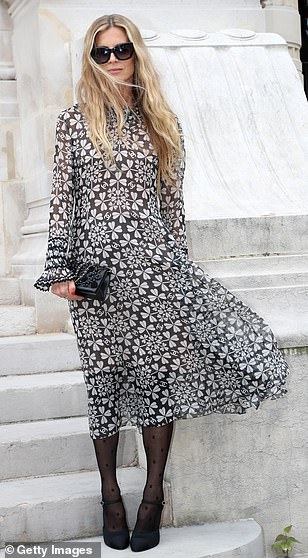 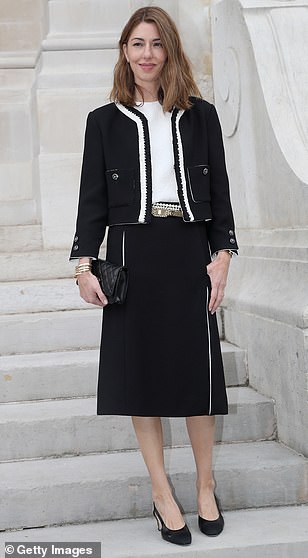 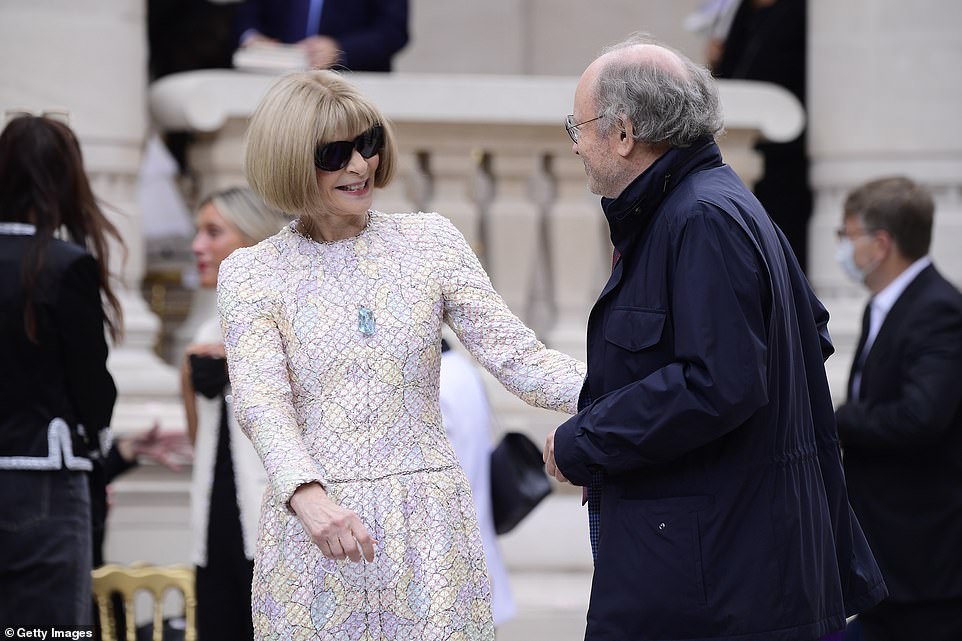 Exciting: After going digital in January, Paris Haute Couture Week is back, with big-name labels staging physical shows to unveil their autumn/winter 2021 collections

Style: The models had on a series of incredible looks as they made their way down the typically elaborate Chanel runway 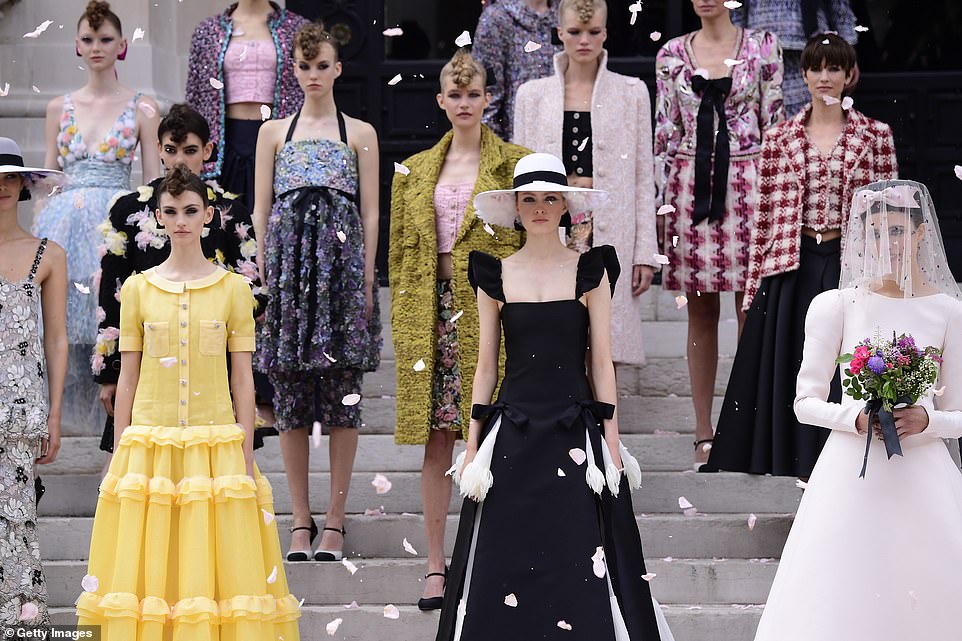 Normal People actress Daisy, 23, looked incredible in a navy plaid dress that cinched in at her slender waist with a chunky brooch belt as she arrived for the star-studded fashion event.

Model Laura, 40, wowed in a sheer black and white Chanel dress which she teamed with black sunglasses and dark tights.

Former Vogue editor Anna, 71, looked typically chic in a light pink and yellow tweed dress and her signature dark sunglasses as she took in the Fall-Winter 2021-2022 collection.

Meanwhile American actress Sofia, 50, also looked incredible in a smart black and white blazer and matching skirt which she wore with a silver and pearl-studded belt.

Anna completed her look with a statement pale blue pendant as she chatted to a male friend in the crowd and had on a pair of grey and white snakeskin heeled boots while wearing her blonde tresses in a sleek cropped do.

French actress Lyna Khoudri, 28, also made a stunning appearance at the show, putting on a leggy display in a black and white mini dress, while Canadian artist Chloe Wise wowed in a navy and white striped suit.

After going digital in January, Paris Haute Couture Week is back, with big-name labels staging physical shows to unveil their autumn/winter 2021 collections. 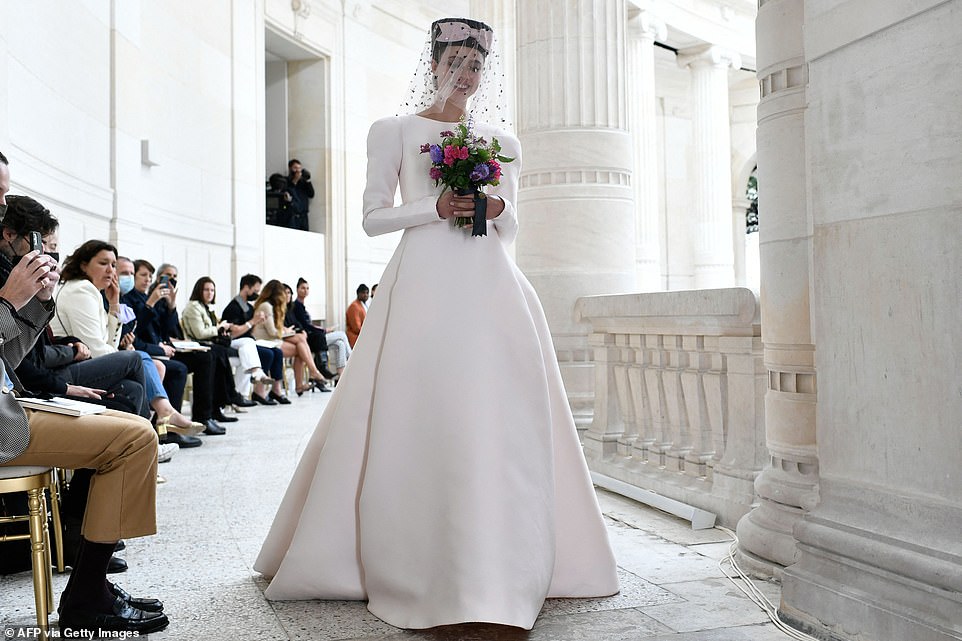 Wow: One of the models wore a stunning white wedding gown and carried a colourful bouquet of flowers in her hand

Monochrome: One of the models wowed in a black and white gown which was teamed with pink heels, while another was clad in an elegant pink mini dress, and a third was dressed in a plunging white trouser suit

Looks: The models stormed the runway with a series of looks including several pieces of Chanel’s classic tweed 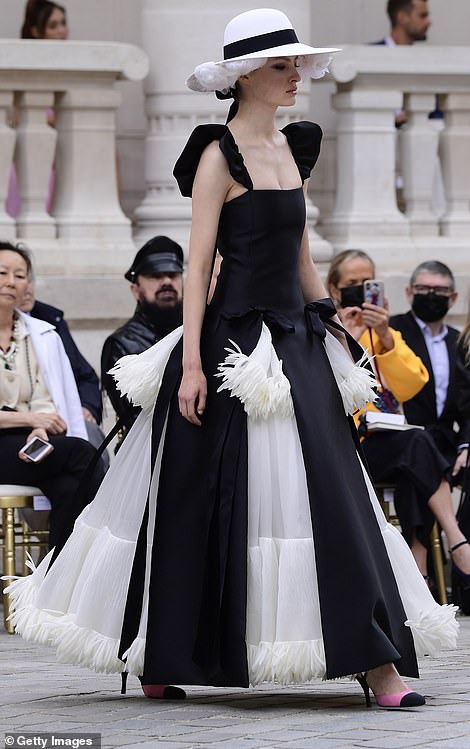 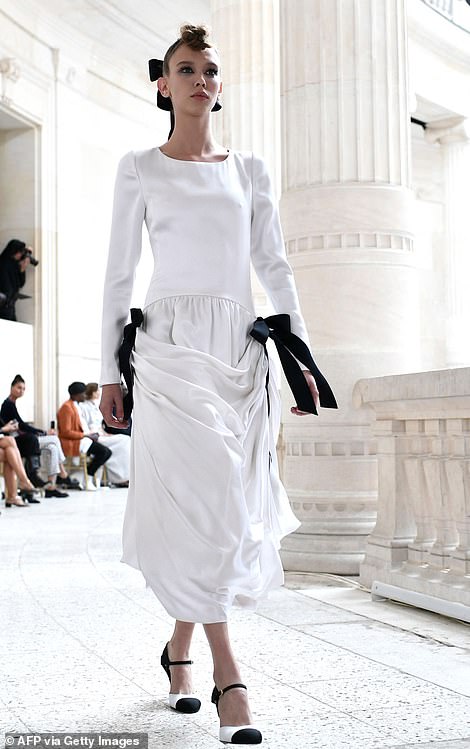 Monochrome magic: A breathtaking ballgown and a white dress with dramatic draped detailing were sent down the runway

The look: The Fall-Winter 2021/2022 collection featured many black and white looks which were modeled perfectly 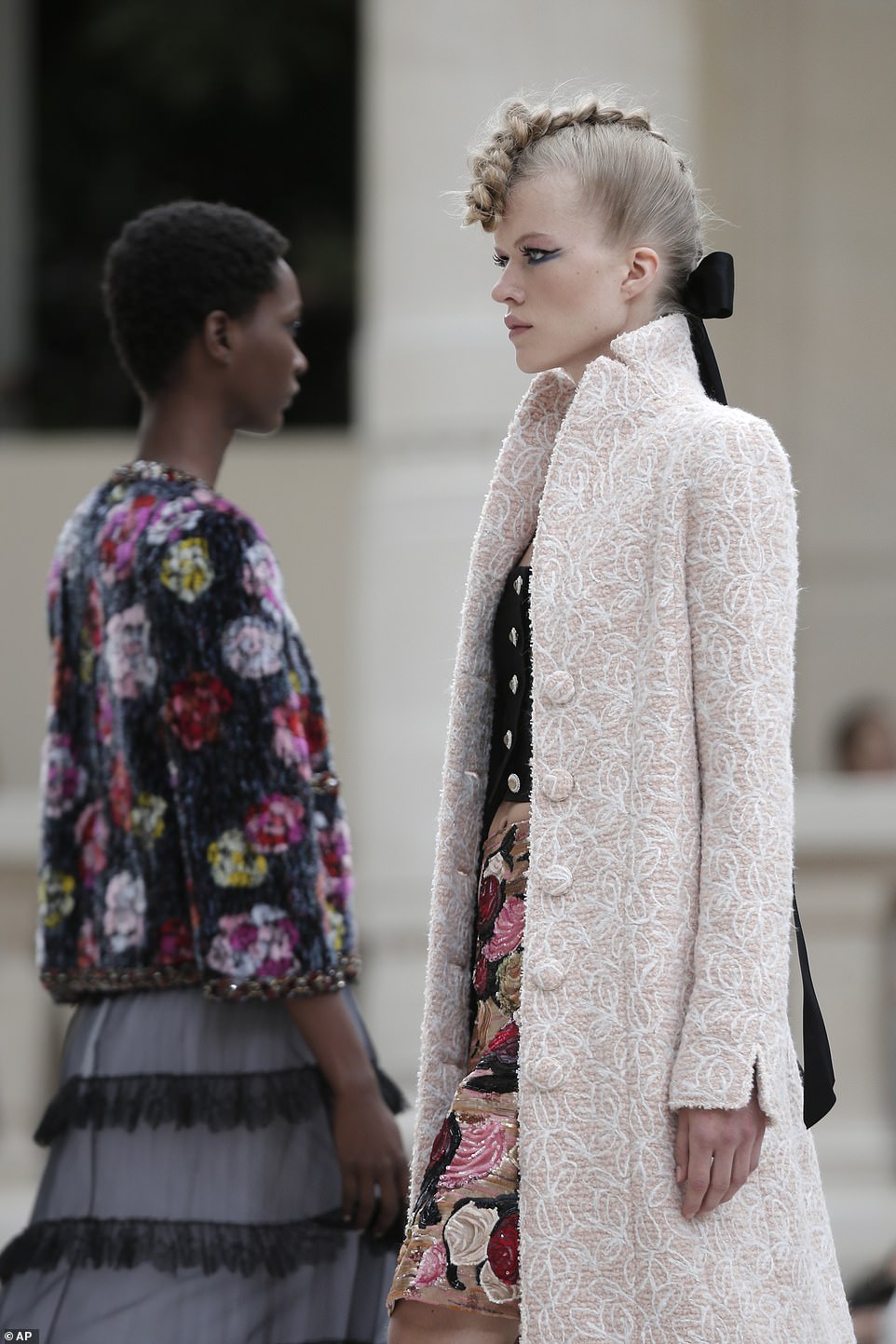 Beautiful: This week’s shows mark a return of runway fashion following the pandemic 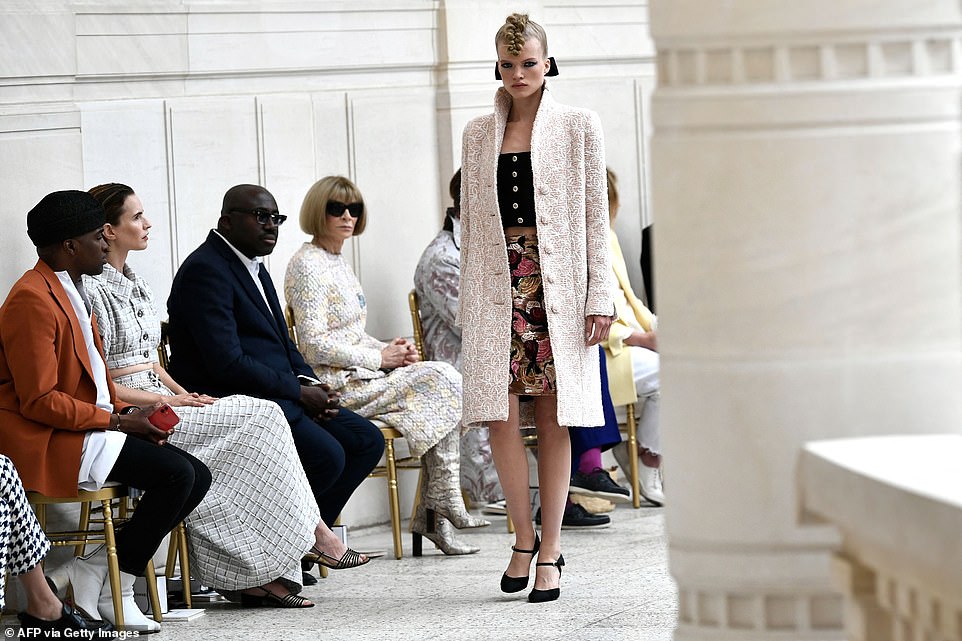 Impressed: Anna completed her look with a statement pale blue pendant as she chatted to a male friend in the crowd

The fashion industry has taken a hit this past year as a result of the pandemic and, as former editor-in-chief of the fashion bible, Anna has seen it all.

At the start of the pandemic, Anna expressed her gratitude for those supporting American designers affected by the pandemic through the CFDA/Vogue Fashion Fund, A Common Thread.

‘I have been so moved by acts of philanthropy in the fashion community in particular, and, of course, by the many donors large and small who have supported A Common Thread, the CFDA/Vogue Fashion Fund we’ve created to help American designers in this challenging time,’ she wrote in a piece for Vogue.

She urged readers to hear the stories of these designers: ‘Listening to these incredible talents talk without pretense about what they’re going through is a profoundly emotional experience. It reminds you that our fashion community is exactly that—a community of people, who need our help as never before.’ 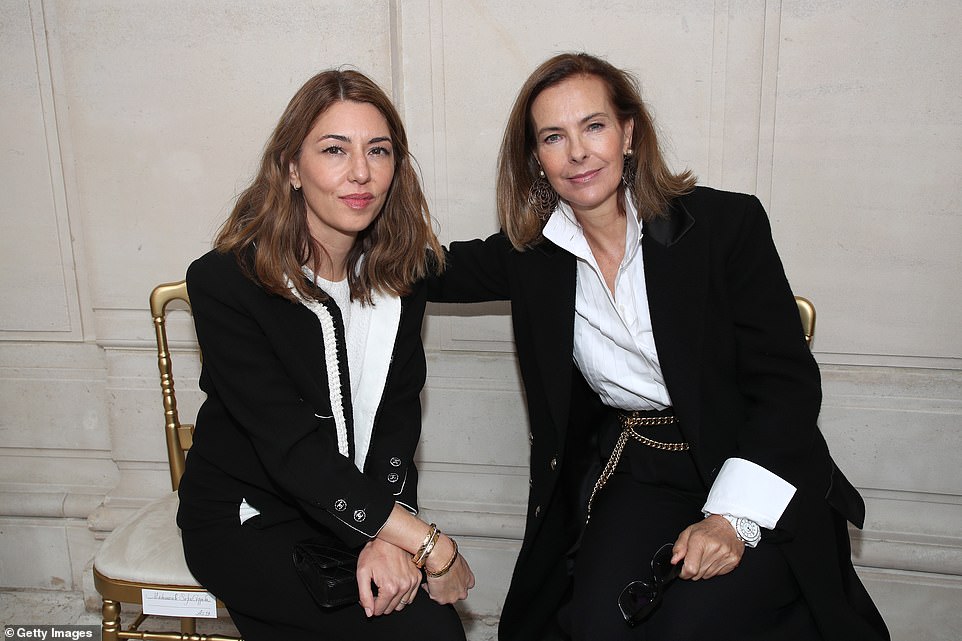 Pals: Sofia was joined by french actress and model Carole Bouquet as she attended the Chanel Haute Couture Fall/Winter 2021/2022 show

Plaid’s a good look! Normal People actress Daisy, 23, looked incredible in a navy plaid dress that cinched in at her slender waist with a chunky brooch belt 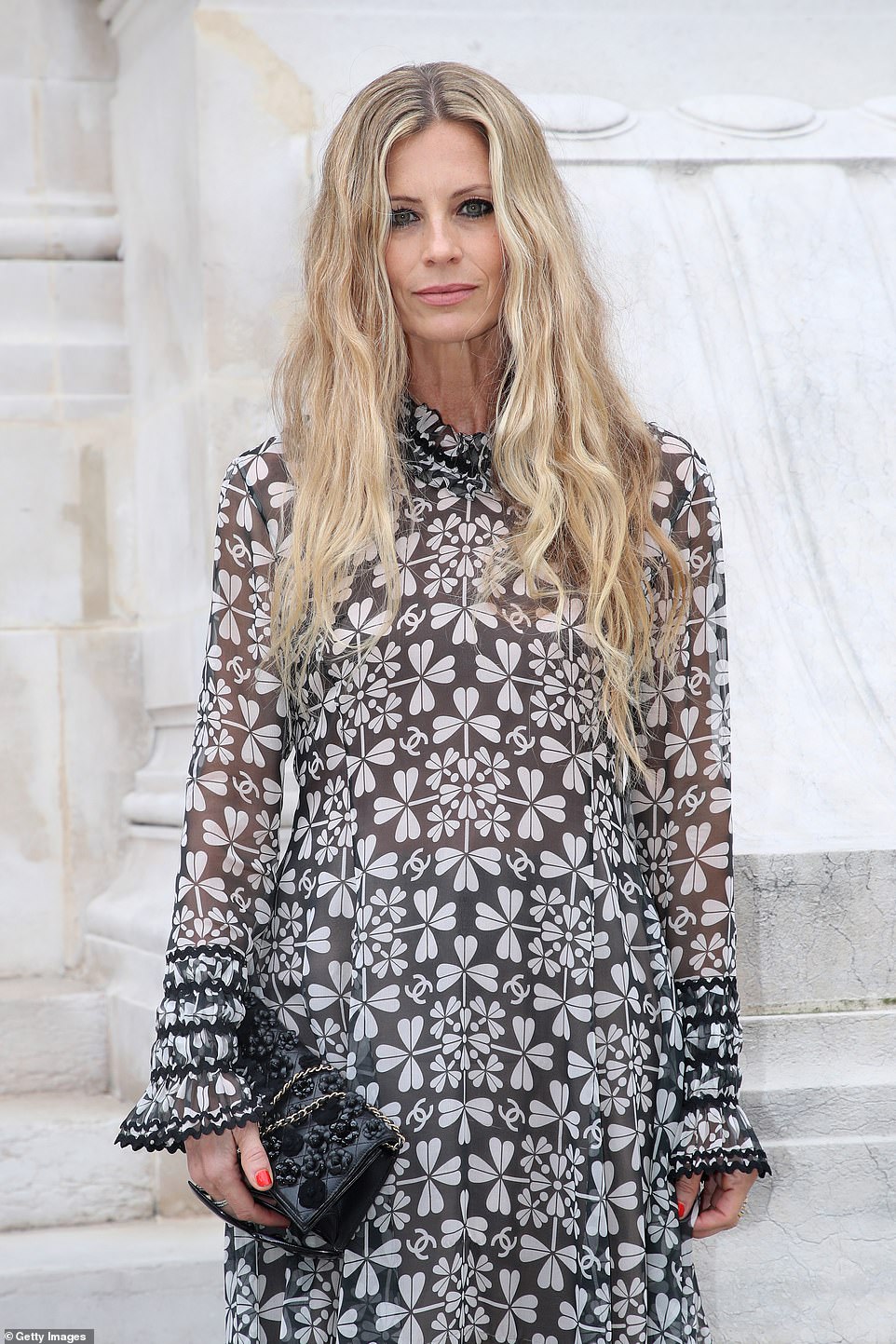 Glowing: Laura teamed her gorgeous dress with a black embellished handbag and wore her blonde tresses in beachy waves 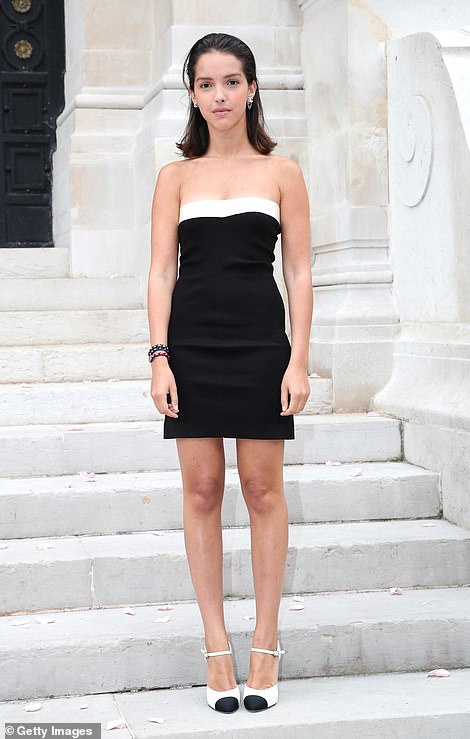 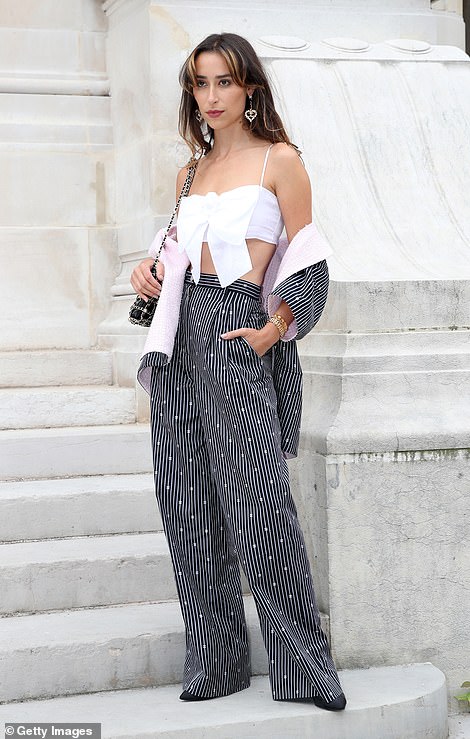 Stars: French actress Lyna Khoudri, 28, (left) also made a stunning appearance at the show, putting on a leggy display in a black and white mini dress, while Canadian artist Chloe Wise (right) wowed in a navy and white striped suit 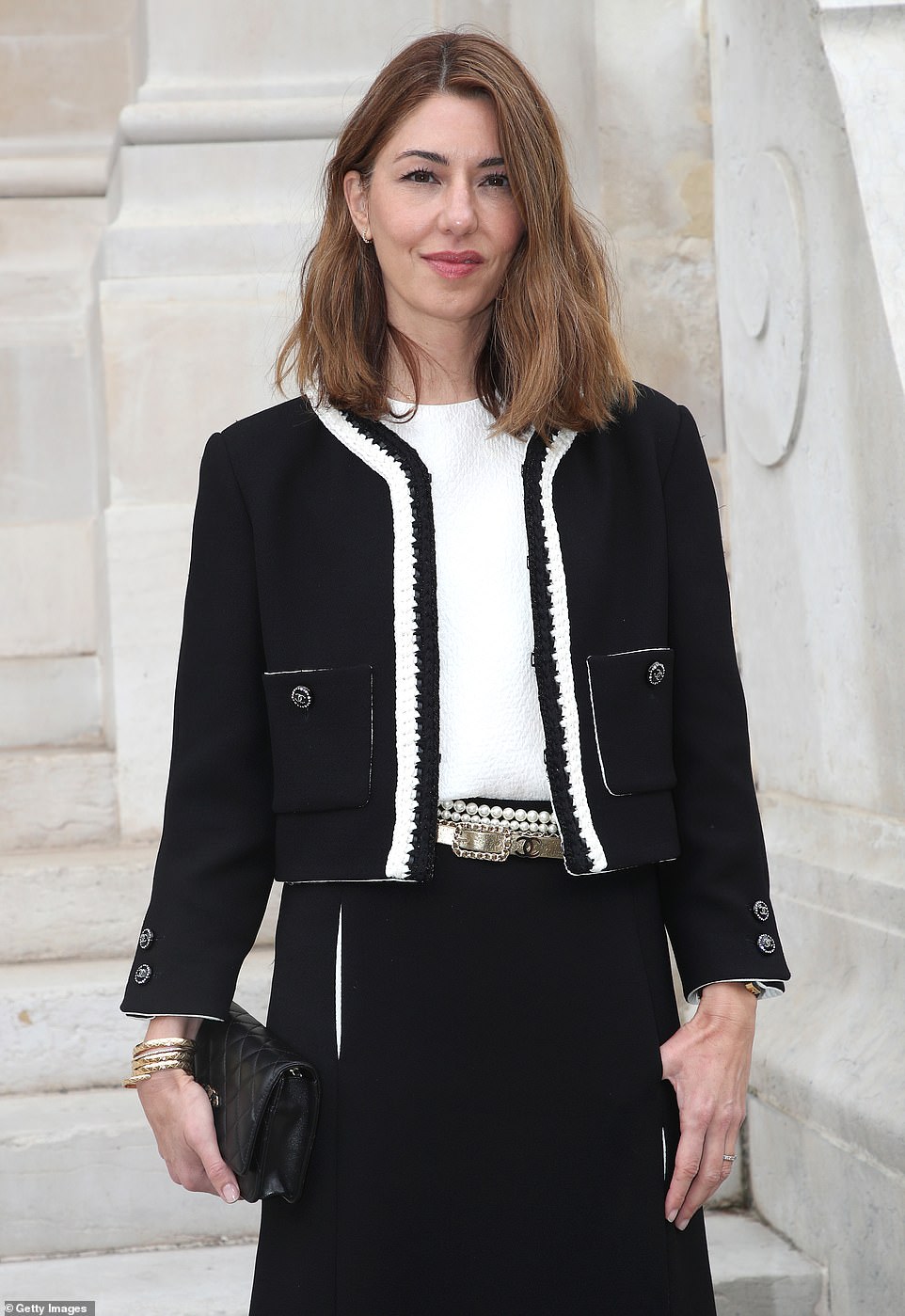 Radiant: Sofia wowed in the smart Chanel suit which she accessorized with a quilted Chanel bag and gold bracelets 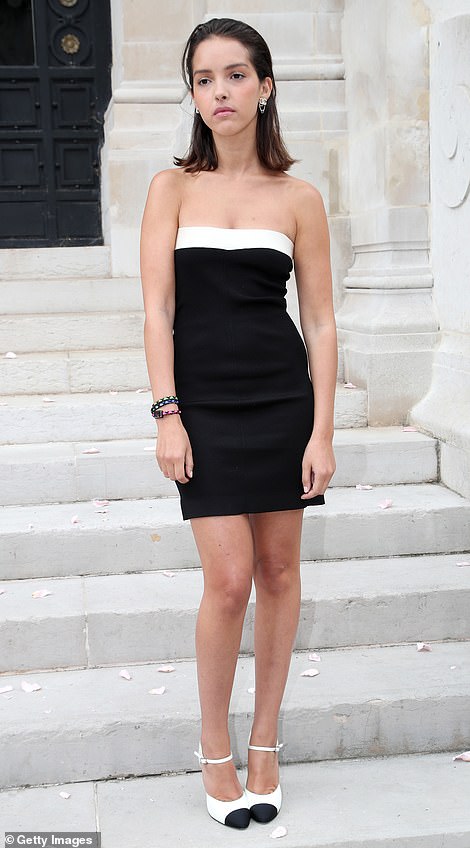 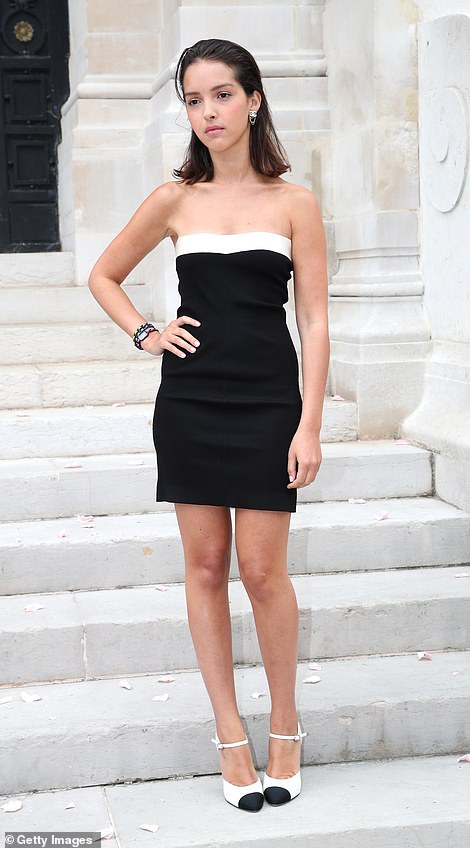 Talent: Lyna Khoudri is an Algerian-French actress best known for her role in the Sofia Djama-directed film Les Bienheureux, and she made a bold statement in a black and white mini dress

Anna herself landed in controversy last year after she admitted to allowing ‘hurtful and intolerant’ behavior during her 32-year reign at the fashion magazine, as well as conceding that she had not done enough to champion black staffers and designers.

The editor made the confession in a company-wide memo released during the nationwide unrest following the death of George Floyd.

Several months following the memo, a group of 18 Black journalists who have worked with her over the years accused her of favoring employees who are thin, white, and from elite backgrounds in a piece published by the New York Times. 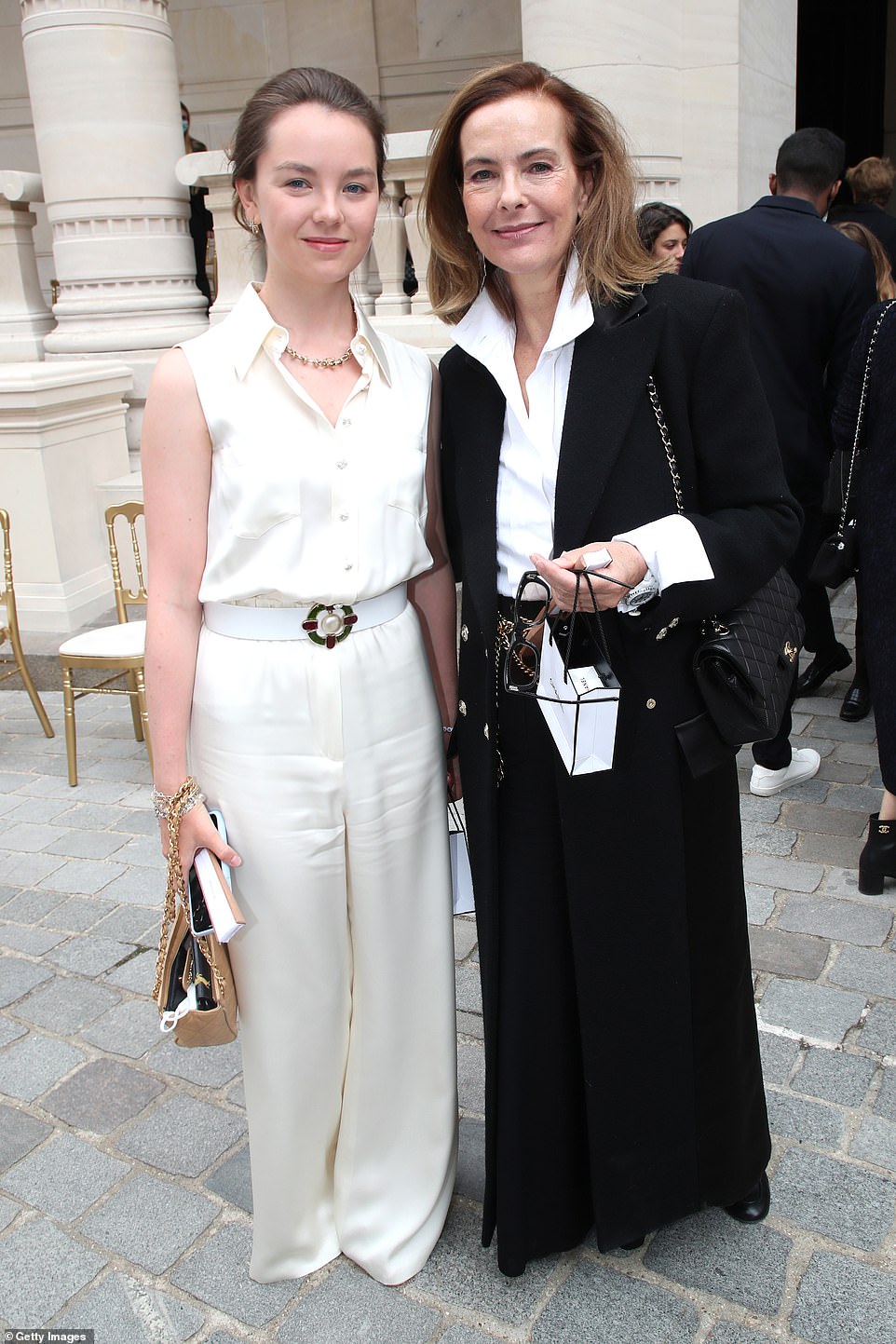 Glam: Princess Alexandra of Hanover, 21, and Carole posed for pictures together as they headed inside the venue 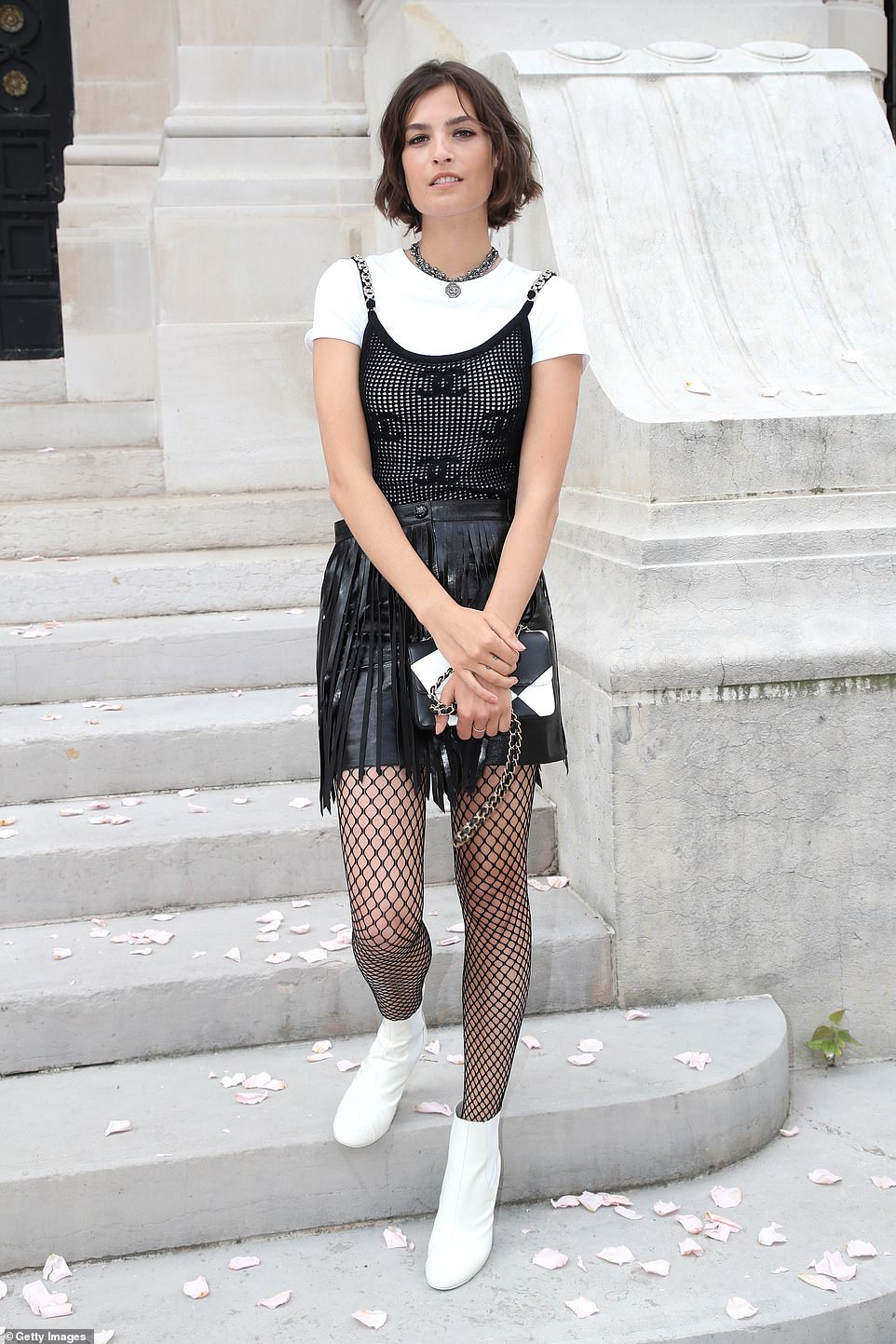 Eleven of them called for her resignation following offensive incidents involving her use of the word ‘pickaninny’, and other cultural appropriation controversies, including outrage over a 2017 Vogue shoot that featured Karlie Kloss posing in a geisha outfit, with her face in pale makeup and her hair dyed black.

The photo shoot in Japan drew immediate accusations of ‘yellowface’, however Wintour reportedly shut down concerns from her staff, insisting that the pictures could not be cut because it would incur an ‘enormous expense’.

In December she received was promoted to global chief content officer of Condé Nast and global editorial director of Vogue. 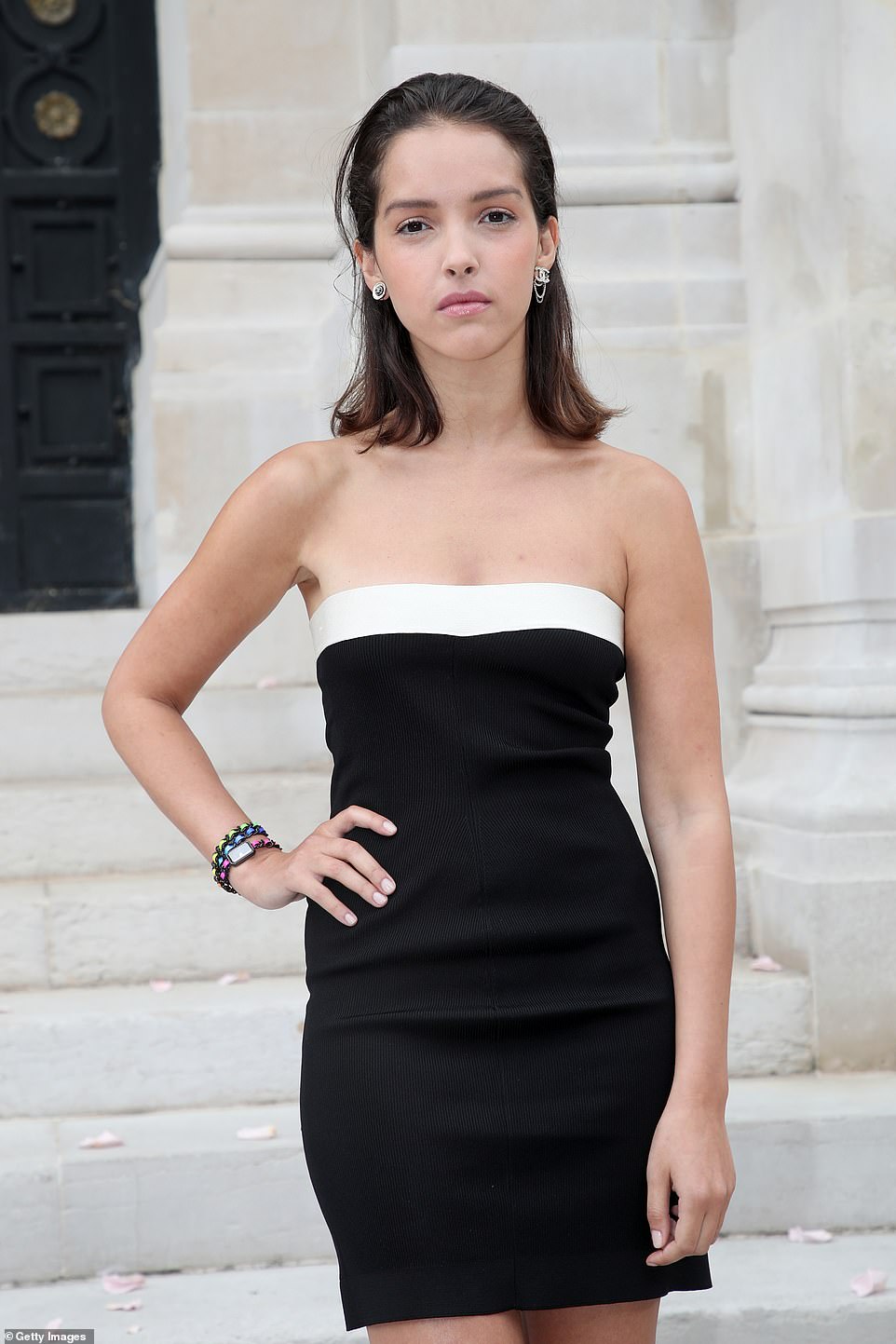 Glowing: Lyna wore her brunette tresses slicked back and opted for a very natural covering of makeup 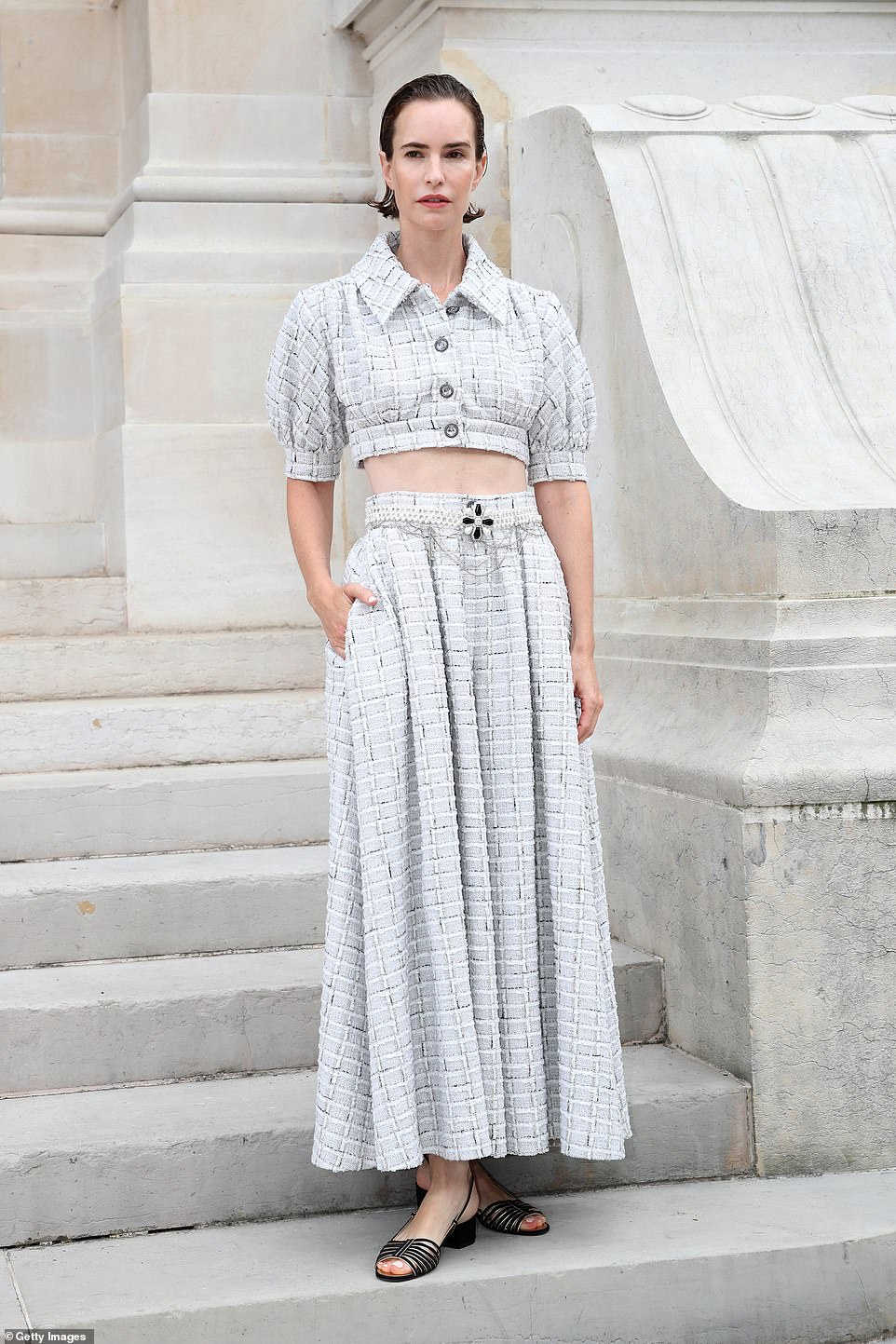 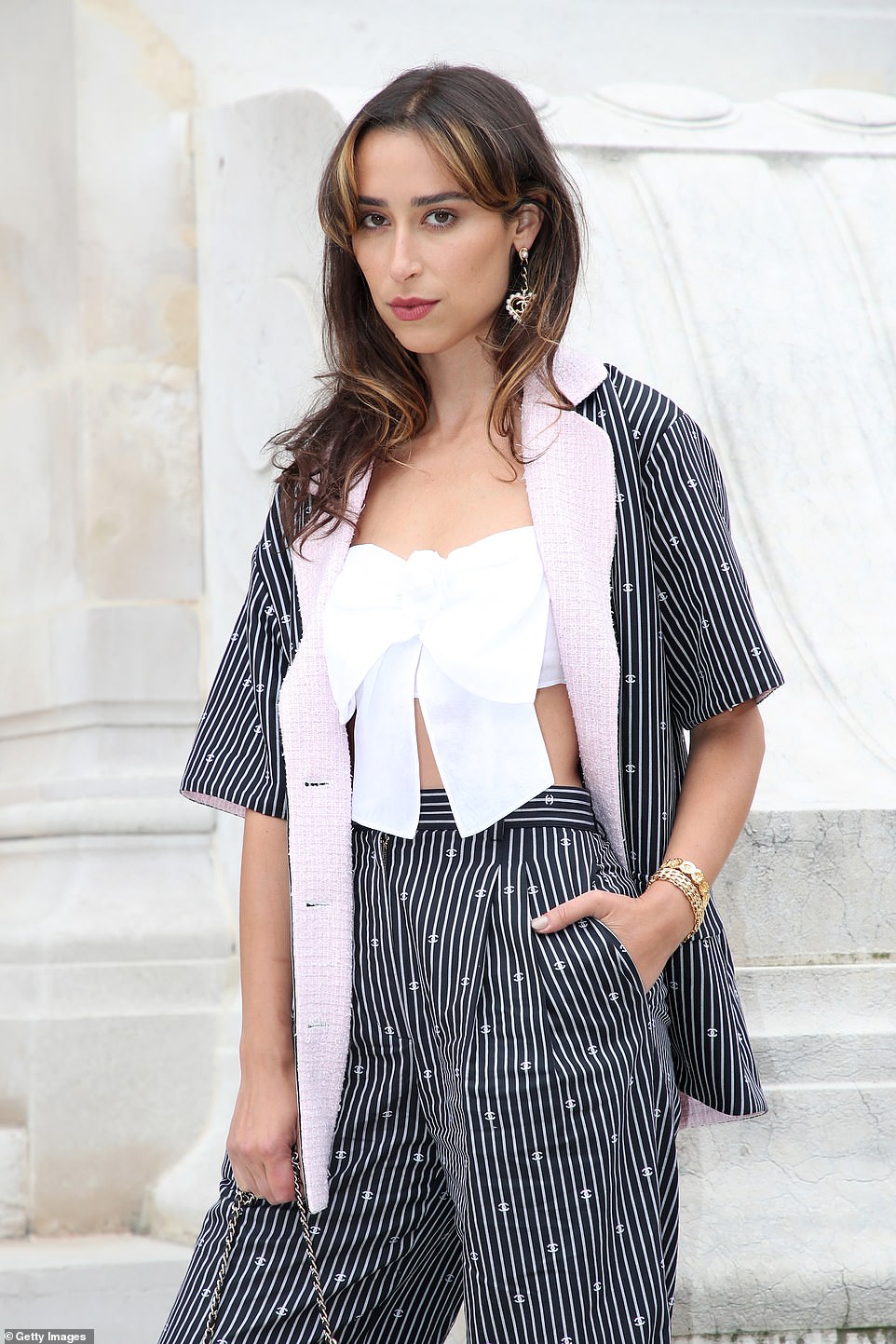 Incredible: Chloe showed off a hint of her toned abs in the suit which she wore over a tiny white ribbon design crop top