Chanel Iman took to Instagram on Saturday to reveal that she and her new hubby Sterling Shepard were expecting a baby girl. This is the couple’s first child.

The supermodel, who wed the footballer in March, posted a photo of the duo on Instagram lovingly sitting atop a pink and gold couch on a lawn with the caption, “It’s a GIRL.” The image also had a series of joyful emojis in celebration of their little lady.

After a whirlwind four month engagement, the Victoria’s Secret Angel tied the knot with New York Giants’ Sterling Shepard in front of 300 friends and family members at the Beverly Hills Hotel on March 3. The blushing bride wore two gorgeous gowns by Zuhair Murad. 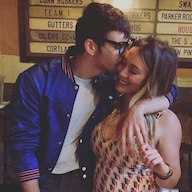 Back in December, the 25-year-old wide receiver popped the question with a stunning rose gold sparkler on Iman’s 27th birthday. She later posted a photo to her Instagram account sharing the news:

“A night full of tears of happiness. I’m beyond excited to spend the rest of my life with you @sterl_shep3 you are my soulmate, my best friend, my everything! Can’t wait to be your Mrs.”

After meeting at Victor Cruz‘s birthday party in November 2016, the supermodel began dating the NFL star.

“When I first met him, he was in a suit and looked so sharp,” she revealed to People in August 2017. Shepard added, “I walked up to her and bought her a drink and it was over after that.”

Yes, it was. Congrats to the growing family!