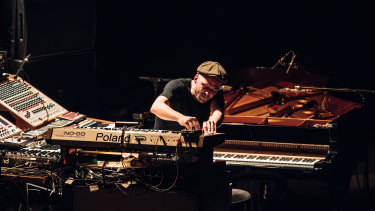 The only thing that might have interrupted the sense of calm engendered by this show would have been trying to categorise what you were hearing.

Chill-out? Ambient? Neo-classical? A decade in to Nils Frahm's professional career, the 37-year-old Berliner's music was as defiant of genre as ever, so best to just surrender to those enveloping chords and warm beats.

Frahm's array of keyboards, synthesisers, loop stations and effects pedals looked about the same as when he last played here 14 months ago, to another capacity crowd. Yet the sounds he conjured as he dashed between them were moodier than the relentlessly uplifting show he'd given then.

That could be the influence of his latest release,  All Encores, a collection of offcuts from the sessions that produced 2018's All Melody  album. They present a minimalist,  deconstructed direction Frahm largely abandoned for All Melody's melange of choirs, strings, pipes and techno pulses, but he sometimes returned to it here.

For instance, the show began with a toy piano quote of All Melody's earworm opener The Whole Universe Wants To Be Touched, but then Frahm embarked on a lengthy exploration of drone and reverb on his harmonium. It cast an ethereal spell, and made the eventual panpipe bounce of All Melody's Sunson  a sweeter release than when he transitioned between the same two tracks last year.

Not that the studio versions are ever more than templates for Frahm live. He seemed possessed by the music, his body swaying as he furiously twiddled knobs and hammered keys,  head thrown back in apparent surprise as he added another hypnotic layer to the soundscape. 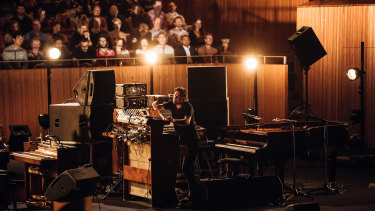 The studio versions are only ever templates for Frahm live.Credit:Jordan Munns

However, the least expected moment came during the quietest. As the gentle, solo piano meditation of My Friend The Forest was about to resolve, a dropped cup, then a crying baby, meant an amused Frahm had to finish it three times.

For all this night's improvisation, a certain pro forma Frahm occasionally emerged, where a mid-paced combination of vintage synth and '80s drumpad kept sounding like Kraftwerk remixing Toto's Africa.

But we could forgive the odd boring moment from a guy who, for his encore, played the inside of his grand piano with two toilet brushes, then sat down for a bravura performance on it called More. Thunder in the left hand, meteor shower in the right, its beauty was beyond pigeonholes.