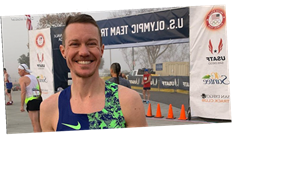 Chris Mosier, a hall-of-fame triathlete, All-American duathlete and six-time member of Team USA, has overcome many challenges — and not just in sports. Mosier is also know as the first transgender man to represent the United States in international competition and is credited with prompting the International Olympic Committee to change its policy on transgender athletes.

However, it was a long road to receiving that acceptance.

The athlete and advocate recently participated in a speaker series geared toward highlighting under-told stories of minority athletes. During an in-depth conversation with former NFL player Dhani Jones for Gatorade Endurance’s “Someone Like Me” Speaker Series, Mosier spoke about being accepted as a transgender athlete.

“Doing an ironman race is nothing compared to me just existing in the world and some of the pain and the hurt that I had felt up to that point in identifying as trans and having interactions with the world,” Mosier told Jones.

Mosier noted that sometimes people make hurtful comments to transgender people without even knowing, “because people lack a basic knowledge and information about what it means to be transgender, about how to talk about identity.”

In an interview about the speaker series with CBS News, Mosier said he wants to be the role model he didn’t have as a child. He created transathlete.com in 2013 as a “resource for students, athletes, coaches, and administrators to find information about trans inclusion in athletics at various levels of play.”

The site also breaks down legislation and policies affecting trans athletes at different levels, from state to international. While progress has been made in some areas, Moiser the sports world is getting worse for transgender and nonbinary athletes.

“States across the country are proposing bills that would ban transgender high school student athletes from participating in sports in the gender with which they identify,” Mosier told CBS News. “There are national sport governing bodies across the globe that are outright banning the participation of transgender athletes. And we know that just socially, there are so many barriers for our participation and acceptance.”

According to transathlete.com and data from GLESEN, which works to end discrimination, harassment, and bullying based on sexual orientation, gender identity and gender expression, 16 states have friendly policies for trans, non-binary and gender non-conforming student athletes.

However, 14 states require medical “proof” or invasive disclosures from student athletes, and 10 states did not issue statewide guidance on best practices.

Mosier has used his social media to draw attention to specific legislation, such as Tennessee’s House Bill 1572, which would penalize schools that allow transgender athletes to play on the team that aligns with their gender identity. He has also raised awareness online about similar bills regarding transgender student athletes in other states including Georgia, Washington and Missouri.

“I think that sport is a vehicle for social change and if we can make change in or sports teams, in our sports leagues, in our community sports clubs, that change can ripple out into the rest of our communities,” he said.