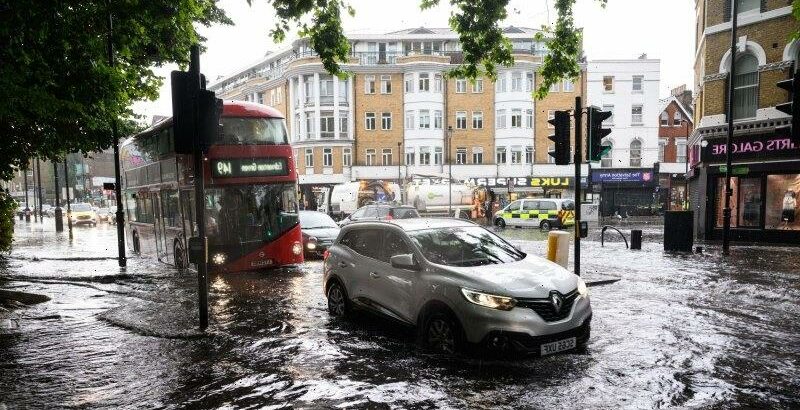 From China to Europe to North America, the world’s major economies are being disrupted by record-breaking droughts, heatwaves, wildfires and floods. 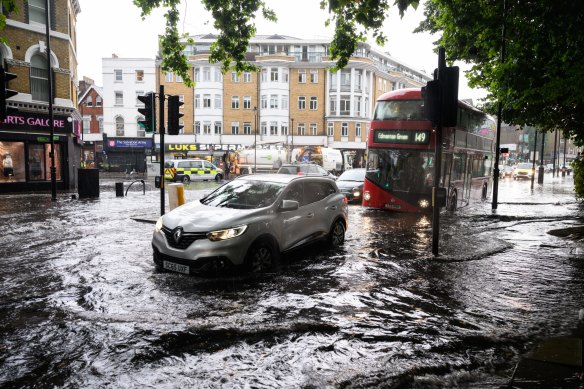 A car negotiates a flooded section of road, as torrential rain and thunderstorms hit London this month.Credit:Getty

The great rivers of Europe are dwindling to a trickle. France’s Loire is so shallow in places people can cross from one side to the other on the sandy river floor. Ancient inscriptions on the banks of the Elbe, Danube and Rhine that marked the low water point in record droughts in the Middle Ages are now high and dry.

In the south-western United States, hundreds of square kilometres of the Hoover Dam, which provides water for 100 million people, have been reduced to muddy puddles.

China had to issue a national drought alert after large sections of the country in the Yangtze River basin experienced 31 consecutive days of extreme heat. In the teeming metropolis of Chongqing (population 31 million), the temperature hit 45 degrees, a national high outside the desert region of Xinjiang.

Even Britain, once blessed (or cursed) with a damp and mild climate, has recently experienced the extremes of drought, wildfires, flash floods and, last month, its first day on official record above 40 degrees.

Meanwhile, there is a growing awareness that climate change does not just affect the environment, but our economies and livelihoods too, often in the most immediate and prosaic ways.

Britain’s heatwave melted airport runways and crippled its train network as tracks buckled, stranding thousands of commuters. Barges on Germany’s Rhine river that supply bulk quantities of coal and raw materials for steel and chemical plants have been carrying 25 per cent of their normal loads to avoid running aground in unusually shallow waters.

The shrinking of Italy’s longest river, the Po, to just 10 per cent of its normal flow rate threatens rice crops as paddy fields dry out. Factories in China dependent on power from hydroelectric dams have had to shut down. Deprived of the river water they rely on for cooling, French nuclear plants have been running on reduced output.

Being uncomfortably hot – a fact of life now in some historically cooler countries not typically equipped with widespread airconditioning – affects people’s capacity to work. A UN report earlier this year estimated “urban heat stress” would reduce productivity by 20 per cent in hot months by 2050.

It’s not all gloom. After decades of procrastinating, some major economies have recently made significant pledges to reduce carbon emissions. US President Joe Biden’s Inflation Reduction Act has – misleading name aside – just committed $US369 billion ($536 billion) for climate and energy provisions that are forecast to reduce America’s carbon emissions to 40 per cent below 2005 levels by 2030. On Monday, we learned that solar had overtaken coal as the top fuel source in Australia’s grid – albeit briefly – for the first time.

Yet it is also clear that we cannot wait for governments to encourage industry to move the dial on carbon reduction and capture. So much damage has already been done we need to change the way we live now.

In Athens, that includes a push to plant green roofs and create micro parks to reduce the effect of radiant heat stored in buildings and roads. In Britain, retrofitting old houses will make them easier to warm and cool. In Australia, it might mean an exodus from now-uninhabitable flood plains and difficult choices about protecting infrastructure such as the Great Ocean Road from the ravages of erosion and storms.

No doubt some climate denier holdouts will continue to stubbornly dispute the origin of the recent extreme weather events and the need to mitigate them. But the hundreds of millions of people who have now suffered their effects first hand know that global warming is something that must be addressed urgently.