Greta Gerwig was so enamoured with author Louisa May Alcott that, before she started work on her film adaptation of Alcott’s beloved coming-of-age novel Little Women, she had an astrologer compare their birth charts.

“Because so much of making art requires some amount of mysticism,” she justified to American Vogue in her January issue cover profile. 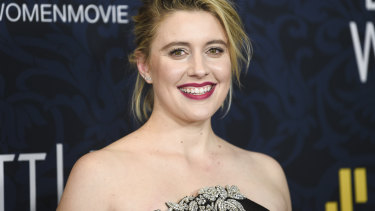 Greta Gerwig’s right on the zeitgeist with her interest in the mystic. Credit:AP

Gerwig is, as ever, right on the zeitgeist.

Forget the stereotype of the caftan wearing middle-aged woman in sensible shoes at a mystic conference. With big venture capital backing a slew of astrology apps (Co-star received $US5 million last year), and social media awash with horoscope memes (the @drunkstrology has 487,000 followers, while @notallgeminis boasts 551,000), astrology is, as the New Yorker put it, “currently enjoying a broad cultural acceptance that hasn’t been seen since the 1970s”.

The global “mystical services” market is now worth close to $3 billion. Meanwhile trend forecasting company WGSN declared two years ago that “new spirituality is the new norm”. You can’t swing a Yin and Yang choker without bumping into a fashion or lifestyle brand coming out with an astrology themed collection.

While astrologers such as Susan Miller have long been popular, especially among fashion and media types, apps such as Co-Star, Sanctuary and The Pattern (which briefly crashed when actor Channing Tatum posted on Instagram about its “patterns” being too spot-on) are taking astrology mainsteam.

The growing interest in astrology has been pinned to other things too: millennial narcissism, the rise of the nano influencer and also the decline in community and organised religion. People are more aware of the science to everything, yet also more susceptible to the woo woo (see: the crystals on your colleague's desk).

You’ve likely seen someone post one of their daily, AI-generated Co-star readings (which have the tone of that one really blunt friend you always turn to for advice) to their Instagram, or even in the work team's Slack channel.

The sense of connection and identification is what Audrey Le Guyader, a 34-year-old communications professional, likes about astrology apps.

Her office has a daily ritual of reading out, and commenting on, their Co-star personal notifications. She was "peer pressured" (in a "good way", she stresses) into downloading the app by her colleagues.

While Le Guyader says she is more reserved and doesn't read hers out, she enjoys the moment of reflection the app gives her.

"[It] gives you something personal to think about and reflect on, offering a moment to concentrate on yourself and your 'outside of work' self," she says, adding that she was never particularly interested in horoscopes before getting the app.

"[I have] noticed some of my younger friends sharing their Co-stars on [Instagram] stories … when the users feel like the reading is ironic compared to their personal situation, or really bad [or] good."

Srna Vuckovic, an astrologer whose family passed astrology down through generations of her Eastern European family, sees the appeal of astrology apps too.

“It will vary from person to person with how they use it. But I do believe they set the stage for the collective to dive into astrology in a very interactive way; you can add friends [and] see similarities … it connects individuals instead of setting them apart and, in this day and age, anything that stimulates unity is imperative."

Vuckovic says she’s seen a distinct rise in interest in astrology over the past five years. She believes it's because people are searching for answers in a time when the rules of being have changed.

“Often I find people are longing for some sort of true alignment to what they could be," she says. "We are living in an uncertain world, with many rules and regulations being broken … I think people are coming to know we can’t look toward others for those ‘a ha’ moments: we must find them and get to them ourselves."