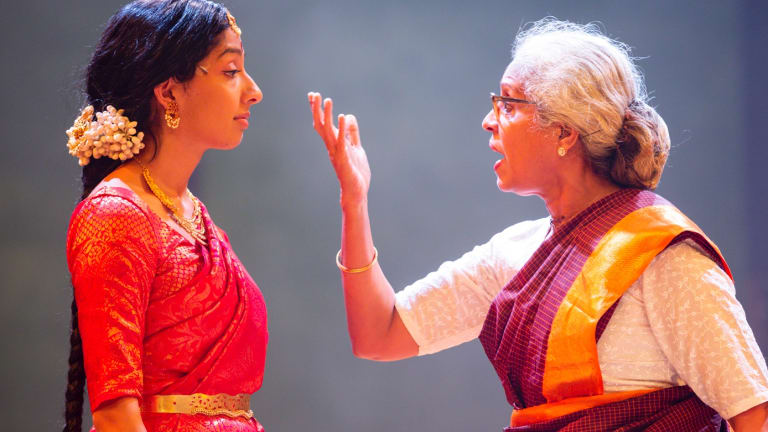 Language is weaponised to deadly effect in Counting and Cracking. Credit:Brett Boardman

The strength of an arts festival is the opportunity it provides to tell an ambitious tale by voices we rarely hear.

This epic Sydney Festival show does that, moving across time and between Sri Lanka and Australia, where into the Georges River, a young man pours his grandmother's ashes.

Sid is an Australian-born Sri Lankan, unfamiliar with Hindu funeral rites and more comfortable in board shorts than a white cotton lungi, more familiar with Coogee than Colombo. Releasing the dead in a land far from their birthplace is a powerful start to a family saga that unfolds over half a century.

Although Sid begins the tale in 2004, it is his mother Radha who is its heart. Radha is not a woman to mess with. She's strong-willed, independent and determined. She has had to be. Pregnant with Sid (short for Siddhartha) she fled a violent Sri Lanka and her husband's murder. She doesn't speak of the past, so Sid knows nothing of his father.

Besides, the student is smitten with Lily, a young Yolngu woman from Arnhem Land who knows her family's history backwards. But a phone call alters their lives.

Act two rewinds to mid-1950s Sri Lanka where Radha is born at a pivotal time. The country where the Tamil minority and Sinhalese majority have lived harmoniously is about to change. Sinhala is to become the official language. It is a politically expedient and divisive move that will marginalise the Tamils, and one Radha's politician grandfather (Prakash Belawadi​) opposes: "Two languages, one country. One language, two countries."

With language weaponised to deadly effect, the play's performance in several languages – simultaneously translated – is potent and works effectively.

It is also a story about Australia, where the politics of division are being whipped up.

There are magical moments in this production directed by Eamon Flack: the exuberance as Sid bodysurfs across the stage, live musicians playing Skype's familiar call tone using Sri Lankan instruments.

The piece needs tightening, particularly in the middle act. Several threads dangle or meander. The efforts of an air conditioner man (a comic Hazem Shammas​) to woo Radha, early in the piece is dismissed with just a line in act three. What becomes of a young woman who joins the Tamil Tigers, or a young man who joins the army? Yet the journey of Radha's husband and Sid's father, Thirru (Antonythasan Jesuthasan​ and Jay Emmanuel), was skipped over.

Not since Cloudstreet in 1998 when Belvoir moved to a tin shed at then-derelict Barangaroo – before those hideous towers were plonked there – has the company willingly vacated its intimate home or created from scratch such an ambitious family epic.

The venue for this is Sydney's Town Hall, symbolically a place where community can unite – and readily access public transport.

Great effort has been put into transforming the main hall into a theatre, with banks of seats installed. Dale Ferguson's economical set signals shifting times and places, while Sri Lankan food served beforehand gives a taste of the country. Yet the cavernous space rather overwhelms the production, particularly its more intimate scenes.

Flack has assembled an impressive international cast of 17 actors. A joy of the production is the strength of the women's roles and their realisation.

As the older Radha, Nadie Kammallaweera​ is played with intelligence, wit and fortitude. And she is ably supported by Vaishnavi Suryaprakash​ as the younger Radha. Rarriwuy Hick as Lily and Sukania Venugopal as Aacha are delightful.

Shiv Palekar is endearing as Sid, in a generous, expansive tale where past and present collide.