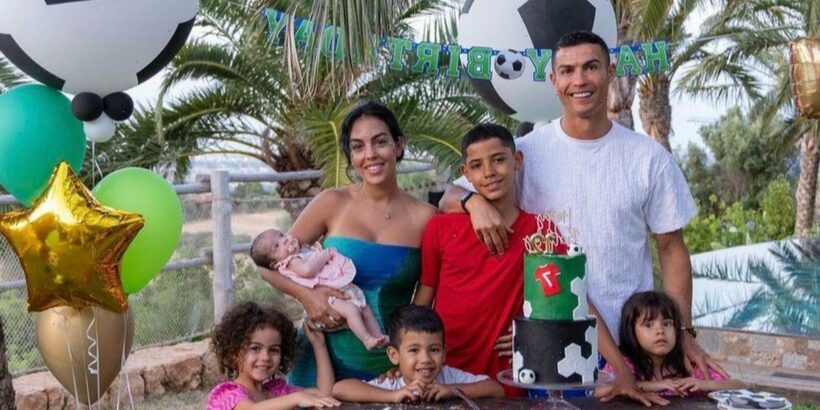 The Manchester United ace, 37, celebrated his son's big day alongside his fiancée Georgina Rodriguez and their children while on holiday.

Cristiano is also dad to twins Eva and Mateo, five, who he welcomed via surrogate in 2017, and he shares daughters Alana, four, and two month old Bella Esmeralda with wife-to-be Georgina.

Mum-of-two Georgina, who recently attended the 75th annual Cannes film festival, took to Instagram to share a series of sweet family photographs from the birthday party.

Cristiano beamed as he placed his arm around his son in one photo, while Georgina cradled their baby daughter Bella.

The 28 year old looked stunning in a vibrant blue strapless maxi dress with her brunette locks tied back in a bun, while Cristiano cut a casual figure in a white t-shirt.

She gushed over her family on social media, writing: "A magical and special day," alongside a red heart emoji.

The couple had gone all out for Cristiano Jr's 12th birthday, and had filled the garden with a series of football-themed decorations.

Various balloons and banners could be seen dotted about the space, and a large two tier cake had been placed on a table.

One sweet photograph showed Cristiano Jr standing by the cake, which featured edible football-themed decorations including a red shirt, as he was showered with gold confetti.

The whole family sat down for lunch together in the afternoon, before later watching the sunset together as the party came to an end.

Georgina cuddled two month old Bella in the snaps as their guests continued to gush over her.

On her stepson's birthday, which falls on 17 June, Georgina took to Instagram to share a collection of family photos and paid tribute to Cristiano Jr in a sweet post.

The model wrote: "Here's to a happy day and a life full of wonderful moments. Mom, Dad and your siblings will keep walking, skiing, flying, swimming, sailing, dreaming, creating and enjoying with you hand in hand.

"We are so proud of the little big man you are becoming. We love you infinity," alongside a red heart emoji.