Diners with food allergies reveal how eating life-threatening ingredients made them swell up, pass out and vomit – after waiters IGNORED their requests to remove them from dishes

Picky eaters are seemingly on the rise, which frustrates restaurant staff and makes it harder for diners with serious allergies to be taken seriously.

Now customers who have severe intolerances and allergies have revealed the potentially life-threatening consequences of not listening to their requests to remove certain ingredients from dishes.

They took to question-and-answer website Quora to share the shocking occasions when a waiter didn’t heed their request, often with disastrous consequences.

Some servers told their side of the story however and demonstrated how frustrating it is when picky eaters claim to have allergies but just don’t like a certain food. 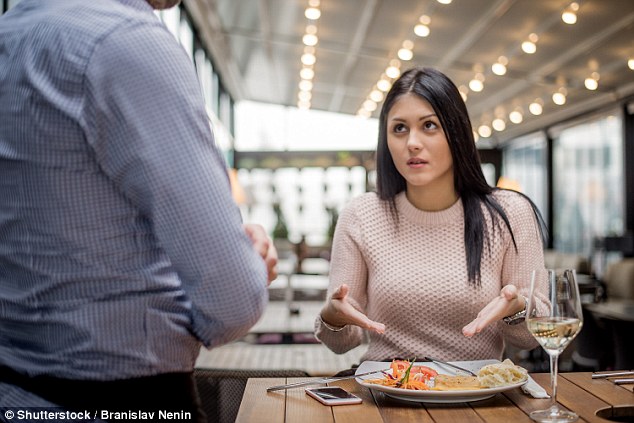 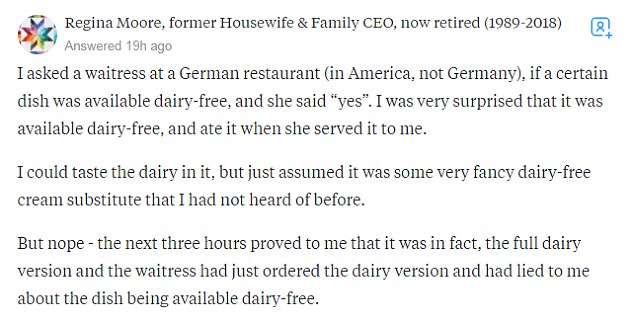 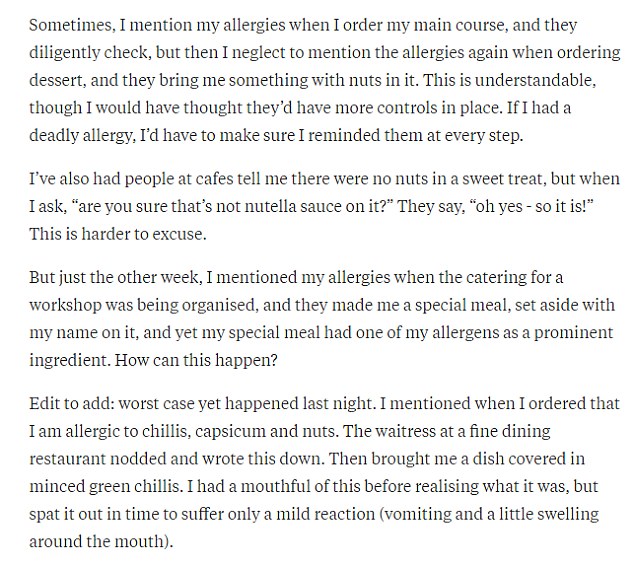 This woman, who is allergic to chillies, capsicum and nuts, said she’s had close calls several times at restaurants. She said one time she told a waiter of her needs and she was brought a dish which contained chillies and reacted after eating it 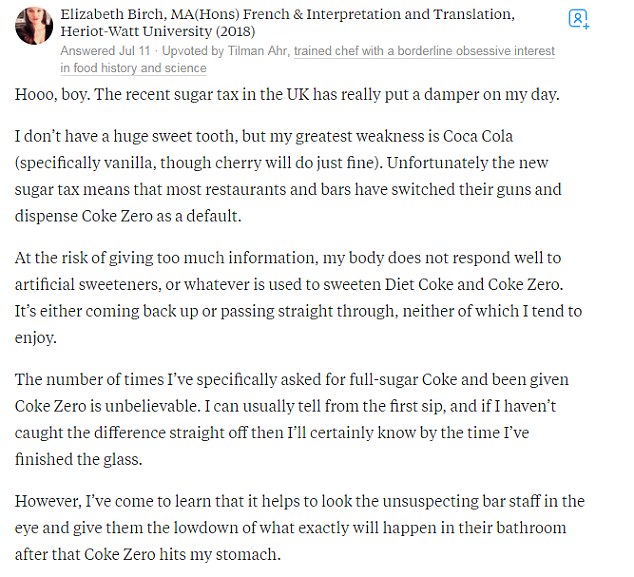 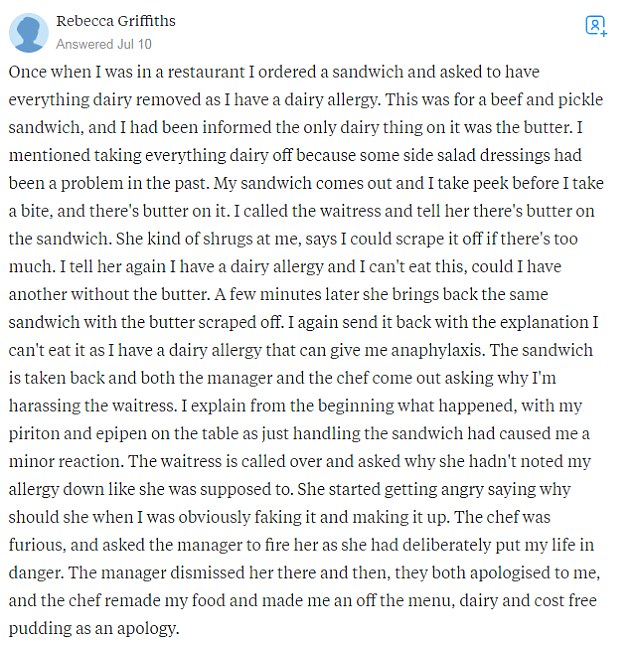 This diner with a dairy allergy had a frustrating encounter at a restaurant where the butter on a sandwich had merely been scraped off and not made fresh without any butter. Even touching the sandwich containing butter had caused her to have a minor reaction – but the waiter was then fired for negligence 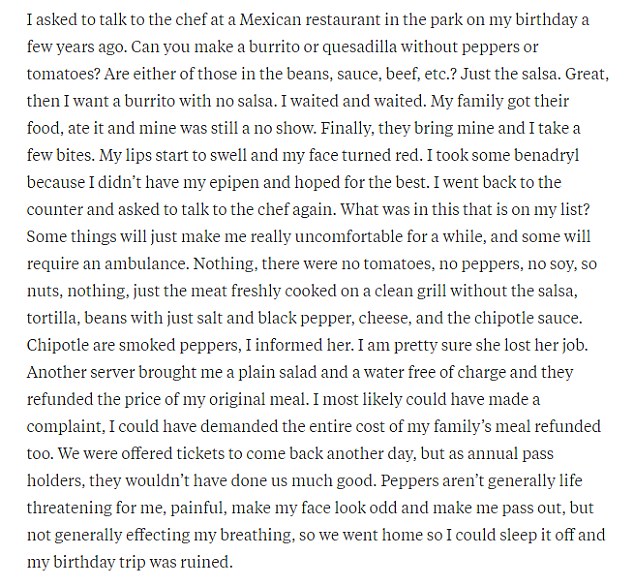 This man with a severe allergy to foods including peppers recalled a time at Disneyland where he had asked the waiter if a burrito contained any peppers. They said no: but unbeknownst to the customer, it contained chipotle sauce, which is made using smoked peppers. It caused him to have a severe reaction 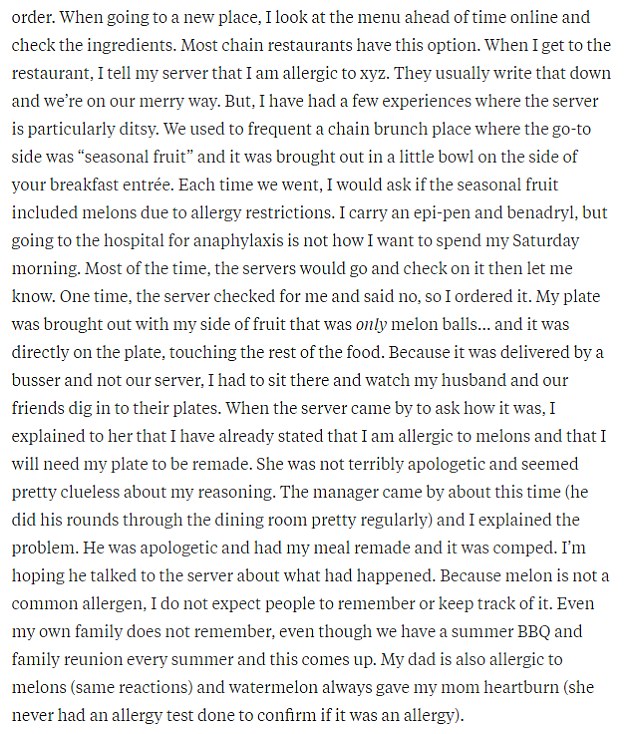 This diner remembered a visit to a restaurant where she had asked if a side of fruit salad contained any melon to which she was allergic. The waiter said it did not – but when it was served, it was a salad of only melon balls that were touching the other food, rendering it inedible to the allergic woman 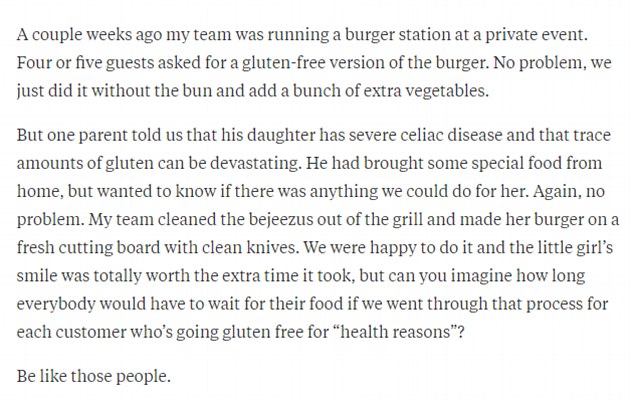 Waiters also shared their stories. This server said he had made sure to prepare food for a little girl with coeliac disease who could not eat gluten, even washing down the kitchen beforehand for her