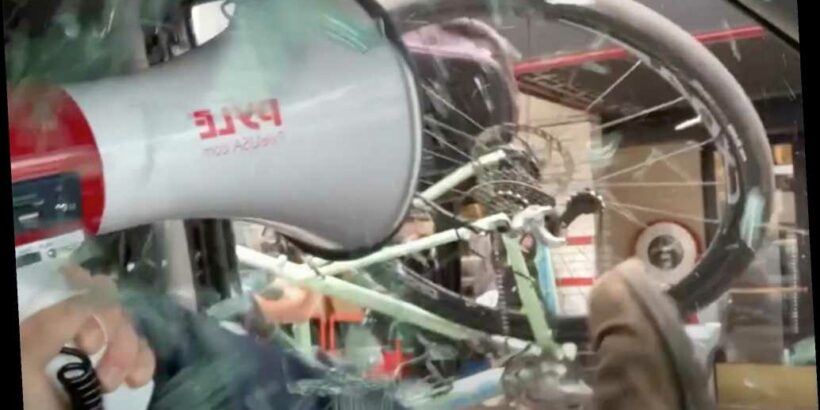 A Canadian driver’s anti-mask tirade — complete with megaphone — was unceremoniously cut short after an angry bystander shattered his window with a bicycle in a wild video.

“When people start smashing your car windows for saying a few words,” wrote Alexander Lasarev above the Facebook clip, which he recorded at a protest in Vancouver.

“Around 3:30 p.m. on March 27 a convoy of vehicles was taking part in an anti-mask rally on Main Street,” Vancouver Police Constable Tania Visintin wrote in an email, according to the Victoria News. “A passenger in one of the vehicles was talking into a bullhorn and pointing it out the window. Witnesses to the incident detained the cyclist until Vancouver police arrived and took custody of him.”

The inflammatory footage starts off with the man railing against sheep who follow COVID-19 quarantine rules and mask mandates out the window through a megaphone.

“You’ve never been lied to about anything — the government loves you,” snarks Lasarev on camera, before mockingly commending onlookers for “complying” with pro-lockdown policy. “Congratulations for following the narrative, and trusting the news, and not questioning anything,”

He continues, “There’s definitely not a psychological operation happening when you’re convinced of a reality that’s based on fear that has nothing to do with what’s actually happening.”

The clip abruptly takes a turn when an infuriated man in a black parka approaches the vehicle and tries unsuccessfully to slap the bullhorn out of Lasarev’s hand as the two exchange expletives.

Not satisfied, the tenacious assailant picks up a bike and begins bashing the mask-hole’s window, eventually causing it to shatter into his lap.

“Wow, ok, are you happy now,” responds Lasarev, to which the cyclist retorts “I am.”

Later on in the clip, the motorist yells to the man out the now-broken window, “you realize you’ve just committed a serious crime.”

The vid concludes with Lazarez getting out of his vehicle so he can try and take a smartphone pic of the attacker.

“This is what you get for trying to wake people up,” he says.

According to the police report, the cyclist is being recommended for charges of mischief and assault with a weapon.