Dad-of-two, 37, drank 200 bottles of wine in two weeks at peak of booze and drugs battle that left him on the streets – but he’s now turned his life around and is a Thai boxing champ

A boxing champion whose drug and drink addiction saw him lose his house, family and job in just a few years has revealed how he was forced to live on the streets for six months before a brutal wake-up call finally changed his fortunes.

UMA Fighter Ian Maddocks, 37, from Crewe, began smoking weed aged 11 to ‘fit in’ and quickly progressed onto harder drugs including cocaine and ecstasy.

Describing his younger self as a functioning alcoholic with a love for partying, dad-of-two Ian, who is partially deaf, managed to hold down a job at the Bentley factory in Crewe for ten years and even get a mortgage with his former partner before his life began to unravel after the birth of his second child.

His descent into addiction took him to a life where he would ‘drink and pass out’ and saw him disowned by his family.  He found himself sleeping on the streets, where he says he was ‘ready’ to take heroin but was told to ‘think of your children’, a moment that kick-started his long, hard road back to sobriety. 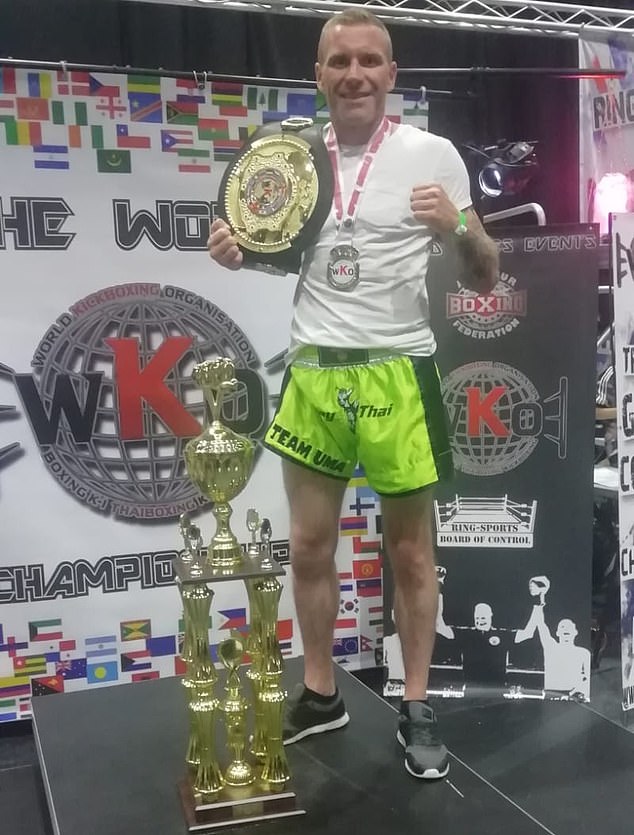 Ian Maddocks, 37, from Crewe, is the current UMA World Thai Gold boxing champion after being crowned earlier this year but just eight years ago he was living on the streets of the north west after his life spiralled out of control due to a drink and cocaine addiction 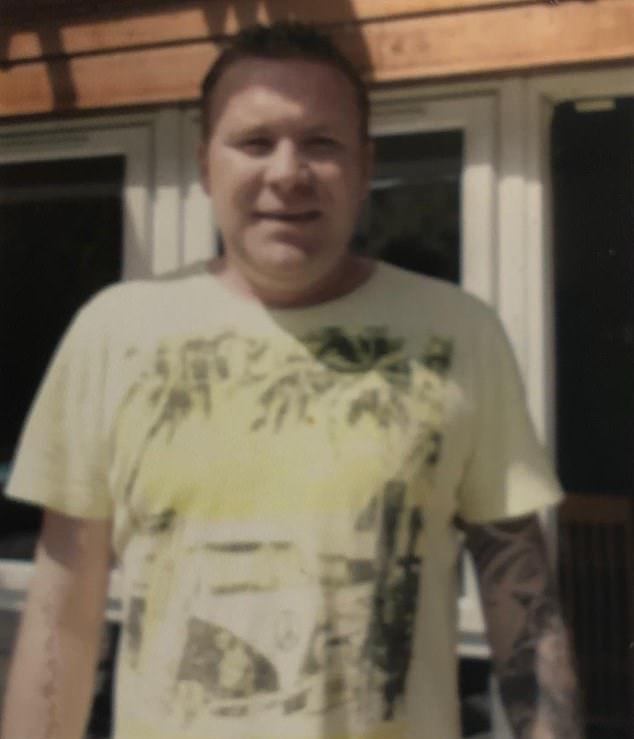 Bloated: Ian pictured as he entered a detox programme that would eventually turn his life around. At his lowest point, he was forced to live on the streets after becoming trapped in a cycle of ‘drinking to pass out’ and becoming estranged from his family 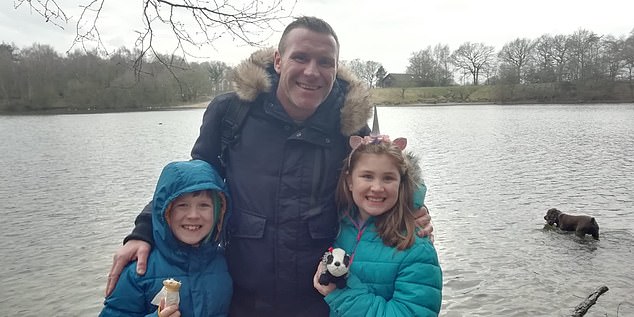 A dad again: Ian pictured with his two children Amelia, right, nine, and Jack, eight, left, in happier recent times. At the height of his addiction, he didn’t see his children for six months and wasn’t allowed to spend time alone with them when he did see them 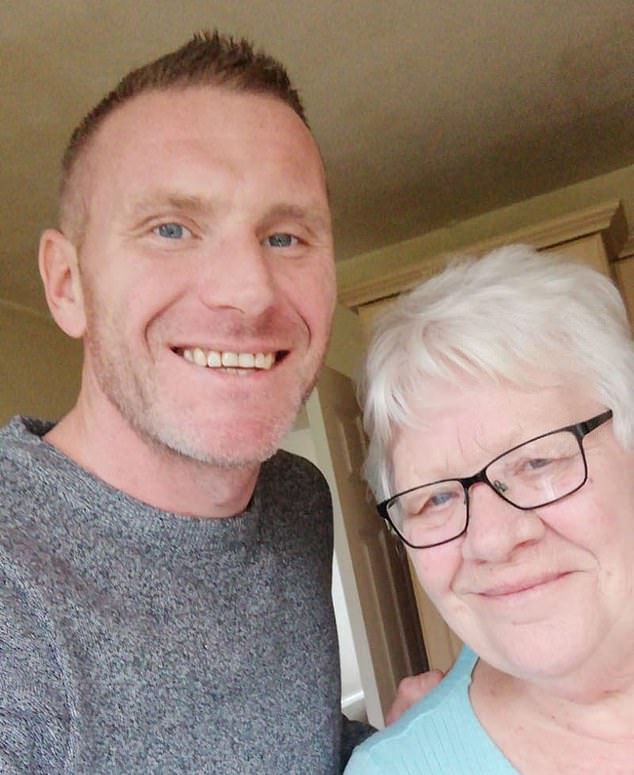 Hardest decision: Ian with his mum Jacqueline who he moved in with for two weeks when his drinking was at its worst; when police escorted him from her home at her request, she found 197 empty bottles in his bedroom amassed over just 14 days

Ian describes how his early childhood saw him bullied for his poor hearing and his ginger hair. His late grandfather, Steve Jones, decided to enroll him into martial arts classes to give him more confidence, a sport that he quickly got good at.

He says: ‘People started to notice me and it went to my head a bit. I started bullying the bullies.’

Desperate to fit in with the cool crowd, Ian tells MailOnline that by his early teens, he’d already tried harder drugs and was taking ecstasy and speed at 16.

He says: ‘My family didn’t know, I got away with it for a long time. In my late teens and early twenties, I was partying all the time and I just thought “I’ll just do it every weekend”’.

‘Looking back now, I’d drunk for most of my life, I was a functioning alcoholic for a long time.’

Becoming a father to Amelia, nine, when he was 27 made him stop taking cocaine but he struggled to control his drinking.

Within months of his second child, Jack, now eight, being born in 2011, he was drinking heavily, often downing two glasses of wine before going to work at the Bentley factory to ‘take the edge off the working day’.

He says: ‘It was drinking to function. I was waking up in the morning and having half a bottle of wine. Before we even had Jack, I knew that I couldn’t even look after myself let alone another baby, but I kept it to myself.’ 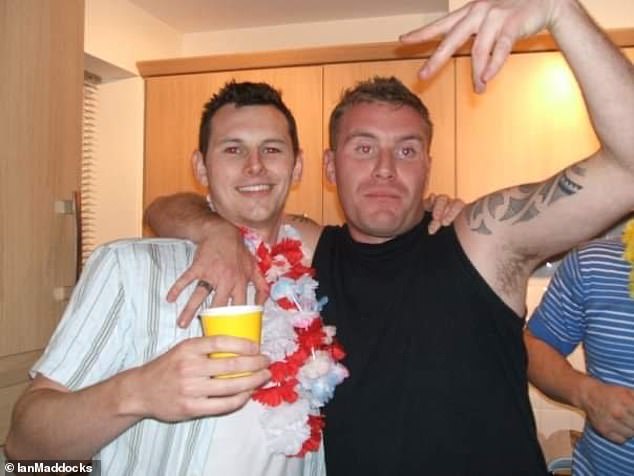 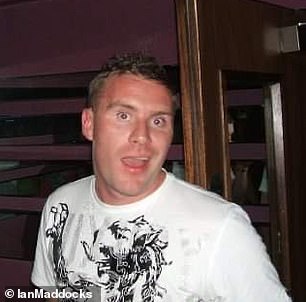 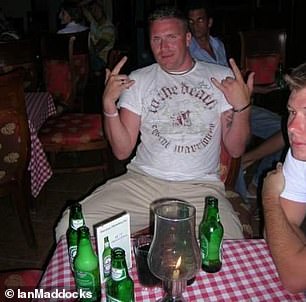 By his early twenties, Ian was ‘taking things to the next level’ on the late 90s rave scene. He says his downward spiral began when the ‘benders’ turned into drinking wine before work 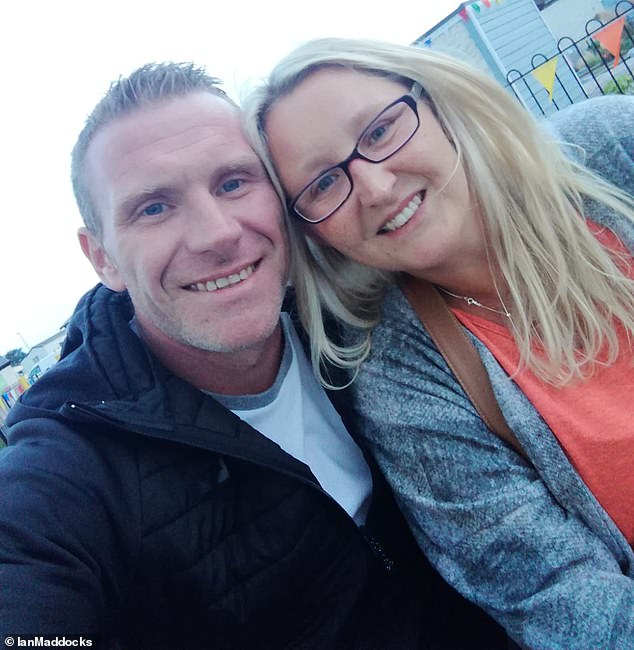 New life: Ian with his girlfriend Louisa, 36, who he met on social media after celebrating his sobriety. The couple live separately but Ian describes her as his ‘rock’ 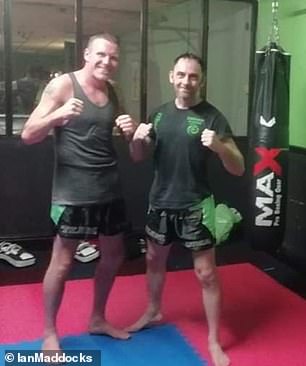 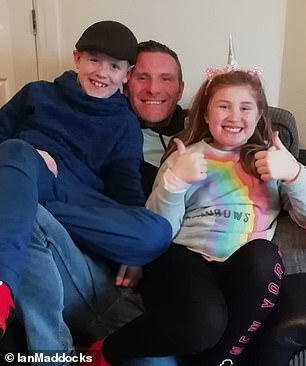 In recovery: Ian in his local boxing gym in Crewe where he trained to be a UMA fighter. Right: With his children Jack and Amelia. He says his children know that alcohol makes him ‘poorly in the head’ 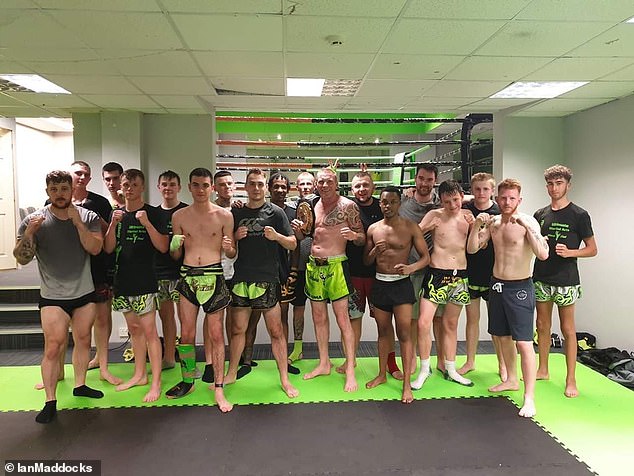 His bosses noticed his decline and signed him off work for nearly a year on sick leave, something Ian says increased his dependency on cocaine and alcohol as he used his statutory pay to feed his addiction.

He says: ‘I did go a couple of times to Alcoholics Anonymous. There was a guy who told a story about ending up homeless and losing his family there once – and I just thought “I’m not even that bad”. It fuelled my denial.’

At the same time, heated arguments with his then partner in front of their two children saw her ask him to move into a rented flat. The death of his granddad, who’d raised Ian as a son, left him reaching for the bottle even harder.

A disciplinary hearing followed at work and Ian was laid off, which prompted his landlord to end his tenancy forcing him to move back in with his mum.

After just two weeks at his mother Jacqueline’s home, she called the police and asked him to leave, unable to cope with her son’s ’24/7′ addiction.

‘I was literally drinking myself to death. I was at her house for two weeks and when she cleared my bedroom out, she found 197 empty bottles of cider and wine. I was stealing her rings to fund my habit.’ 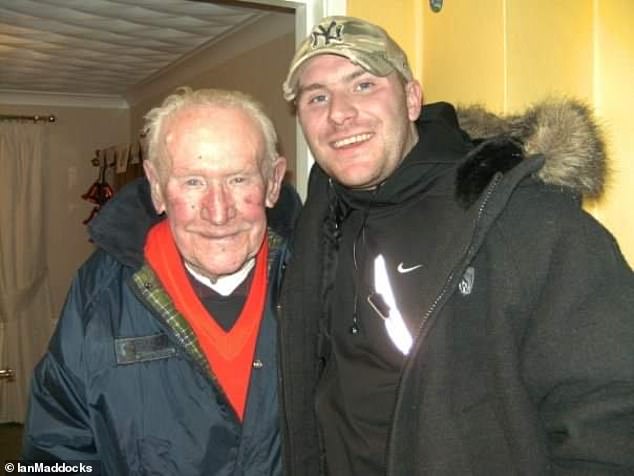 Ian with his grandfather Steve; his death at 90 came as a huge blow and sent Ian further into his descent into addiction 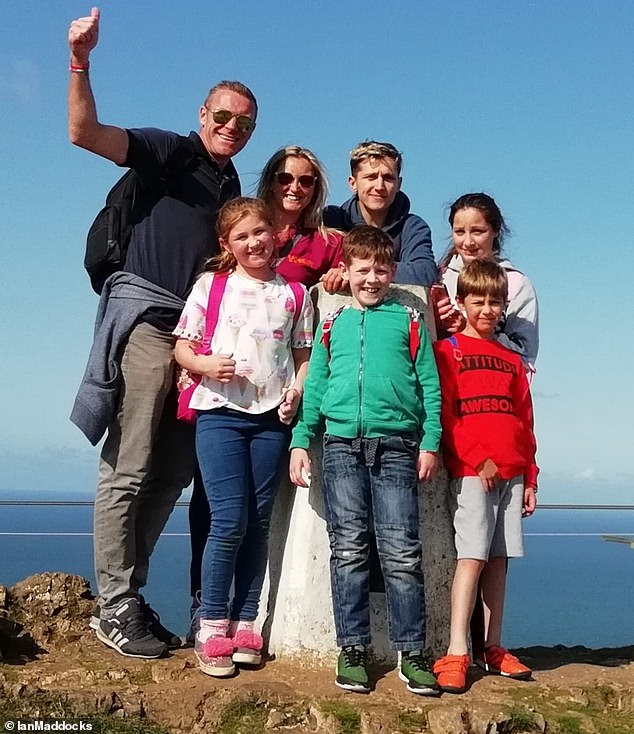 A recent photo of Ian with Louisa, who he met at one year sober after chatting on Facebook, and younger family members

Ian’s downward curve continued and he says his mother saved his life by calling the police, saying: ‘She had no other way out, she was enabling my addiction by letting me live there. I was just drinking and passing out.’

The YMCA told him that night that ‘it wasn’t cold enough’ and he was over 30 and so they couldn’t offer a bed; he ended up sleeping in a church before spending six months on the streets.

He says: ‘I got money from begging. I’d then buy a bottle of cider from Aldi for two quid – it’s not a lot of money. It’s easy to get two quid.’

Ian’s lowest moment was when he was ‘ready’ to take heroin because life on the streets was so bleak he couldn’t see any way out of his situation.

‘It was a turning point. The guy I was with said “think of your kids” and he took it himself instead. Shortly after I went to a homeless shelter and told them ‘I need to get off the drink.’

On a particularly freezing night, Ian also went to A&E and threatened to take his own life and mental health services became involved in his plight. 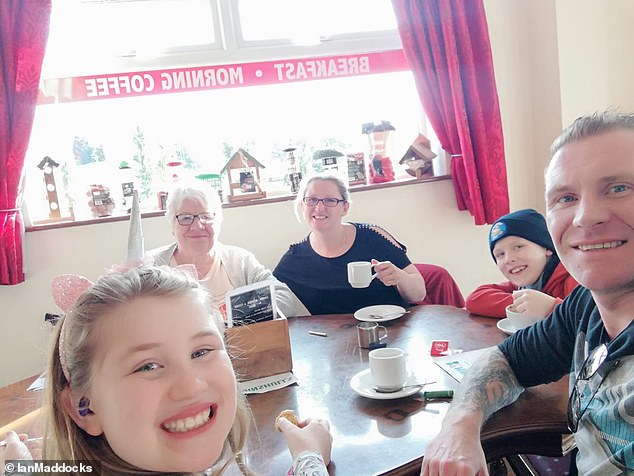 Ian with his family in a recent photo; he began seeing his children again after completing the ten-day detox programme

The key to his recovery was getting a physical address, he says, after mental health worker Mandy Moorcroft found him supported accommodation at Adullam Homes in Crewe.

On his third attempt to prove he could take recovery seriously, his alcohol readings were low enough that he was enlisted in a detox programme and he says he ‘didn’t look back’.

With an address, he got benefits and he could afford his train fare to Birkenhead where he did a ten-day detox.

However, seeing his estranged brother in October 2015 sparked a relapse that lasted for seven days and saw Ian drinking cider in a bush, something that jeopardised his supported accommodation place.

How common is alcohol addiction?

It has been estimated that 1.4 per cent of all adults (aged 18+) drink at dependent levels and potentially need treatment

He had four months of intensive therapy with charity Acorn Recovery Projects and started hitting the gym to beat a bout of depression that followed ‘from having nothing to fill the void of drinking’. Ian also trained as a counsellor.

Re-discovering Thai boxing has, he says, helped his mental health and last year he competed in the British championships just because he had the opportunity. This year he won the World Thai Gold Boxing Champion, held in Barnsley, after training hard twice a day.

He says: ‘I went to fight and I ended up winning. It was the best feeling in the world. My children watched a video of me fight and we all had a cry when I won. It was a money-can’t-buy moment for me.’

He adds that he would never have believed it would be possible to bring himself back from the brink, saying: ‘No matter how far in the ground you go, you can always pull yourself out. I honestly thought “how am I going to get a job, get off the drugs and the alcohol”. It seemed impossible but I’ve worked hard and good things have happened to me since.’