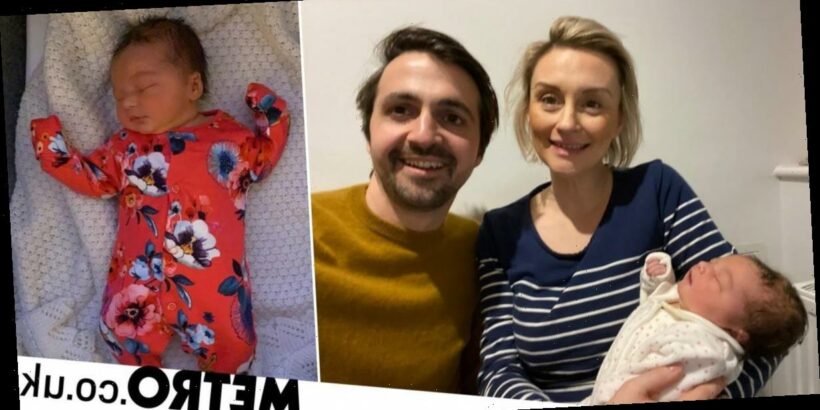 Joe Guest had to act fast when his girlfriend Charlotte Symonds went into labour last week.

Business analyst Joe, 35, from West Yorkshire, realised the pressure was on after being told both midwives were over an hour away.

Charlotte, 38, was overdue and said she knew the baby was coming. The only person who could help was her other half – who has no medical expertise.

Joe dialled 999 and spoke to a handler called Jessica, who proceeded to talk Joe through the process of delivering baby Ophelia.

‘There was definitely a moment of panic but I have a vivid memory of thinking to myself, “okay there’s no one else here, I have to do it myself”,’ said Joe.

‘I looked down and there was a little ball of black hair poking through. I might have let out a little scream at that point.

‘Next thing I know there was a baby on the bed, she had just popped out.’

Despite the absence of a midwife or nurse little Ophelia was a picture of health according to the medical professionals – who didn’t arrive for another 30 minutes.

Mum Charlotte said: ‘Joe is acting like the hero now and he did do a really good job.

‘When I could tell she was coming he was really calming me down.

‘To be honest I did hear a bit of panic in his voice when he saw the head, but other than that he was great.’

Charlotte began feeling contractions at around 7pm while taking a bath and got out to lie on her bed.

Joe added: ‘Initially I thought we had a bit of time because she had only been in labour for 30 minutes or so.

‘Next thing I knew Charlotte is lying on the bed and she tells me “I think it’s coming”.

‘It was such a surreal experience. One minute it was the two of us, then three and then we had a whole room full of people.

Joe said operator Jessica did a brilliant job talking him through the process of delivering the baby.

Charlotte added: ‘It wasn’t quite how I imagined it happening but in the end Joe did a really good job.

‘Ophelia is great, she’s the most chilled out baby I’ve ever known.