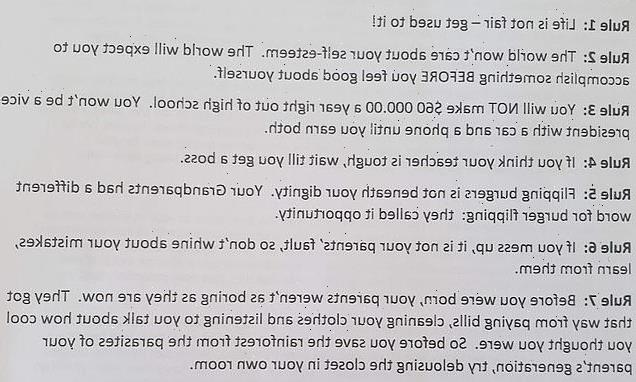 A father has shown off the ‘disgusting’ letter his teenage daughter was given by her boss on her first day of work.

The letter included a list of 11 rules for the young woman to ‘understand’ her place while she was employed at the retailer in New Zealand – and the world in general.

But instead of basic guidelines for her new job, the ‘rules’ were aimed at talking down to young people with the first one ‘Life’s not fair – get used to it!’ setting the tone. 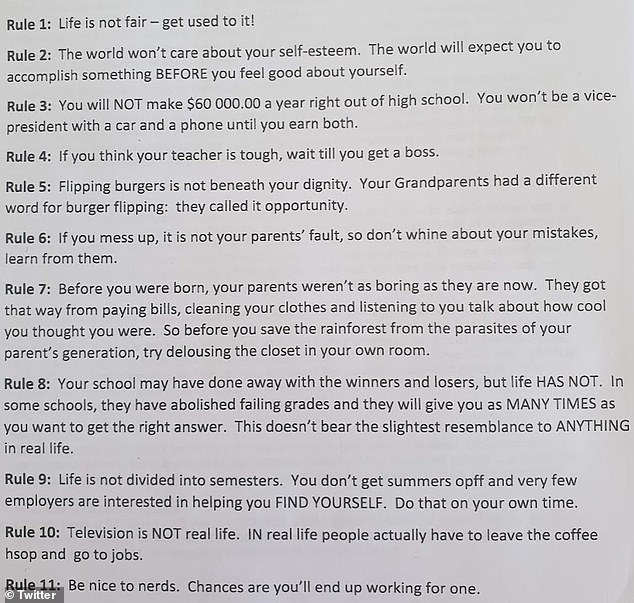 The second rule said ‘the world doesn’t care about your self esteem’ and that the teenager should accomplish something before she felt good about herself.

Rule six stated that mistakes should be owned instead of directed elsewhere – including at her parents.

Rule seven awkwardly said that the teenager’s parents were probably once cool, but then became boring when they had children and were forced to pay bills.

And rule 11 was the old cliche to ‘be nice to nerds’ because she ‘will probably end up working for one’.

The father kept the note to himself until his daughter left the job, and he refused to publicly name the workplace after promising her that he wouldn’t.

‘This is a letter she received from the boss when she arrived on her first day on that job,’ he said, posting it in full.

He also said the retailer hired young people so they could ‘pay below the minimum wage’.

The note wasn’t received well online, with most people labelling the list ‘sad and unnecessary’.

Fortunately it appeared the letter was far from the norm, with most people sharing positive stories about their first jobs.

‘I worked for a fish and chip shop from 17, loved it, boss was awesome, taught me so much,’ one man said.

‘I left a way more confident person than when I started. He told me “mistakes can be fixed”, after I backed his ute into a bonfire and melted his brake light.’

Others said their bosses would tell them it was OK to make a mistake – as long as they didn’t continue to make the same ones and learn from them, while some pointed out that the boss wasn’t particularly original as the ‘rules’ had been around for a long time.

Most said they hoped the teenager was able to find a better job – to which her dad responded she ‘didn’t stay there long’.