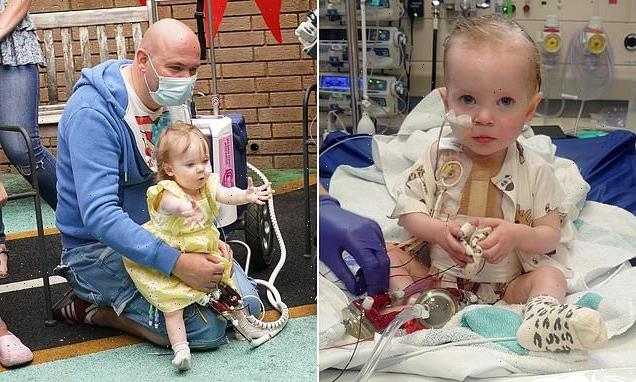 The parents of a toddler who desperately needs a heart transplant has issued a fresh appeal to find a donor who can help save her life.

Beatrix ‘Bea’ Archbold, 18-months-old from Burnopfield, County Durham, underwent a series of gruelling operations after suffering heart failure and is now facing a tense wait for a new heart at Newcastle’s Freeman Hospital alongside parents Terry and Cheryl.

In a fresh appeal to try and find the infant a new heart, her family have recounted the ‘horrific’ ordeal that they went through earlier this year. 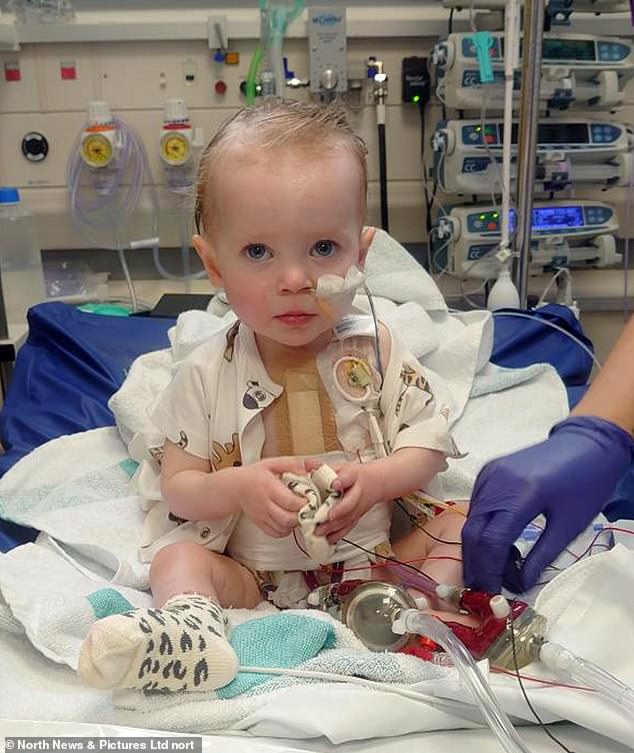 Beatrix Archbold, 18-months-old, from Durham was thought to have covid-19 when she first fell ill earlier this year. However, an X-Ray revealed that her heart had enlarged on one side and she now relies on a pump to keep her alive

In May, Cheryl and older daughter Eliza, 11, tested positive for Covid-19 after returning home from a holiday to Florida.

When Beatrix became overwhelmed by fatigue, the family assumed she too had caught the virus.

However, after she developed a rash and was taken into hospital as a precaution, X-Rays revealed one side of her heart had become enlarged.

She then went into heart failure and was rushed to the Freeman from the Queen Elizabeth Hospital in Gateshead, where she went into cardiac arrest.

The family, who are no strangers to tragedy, lost a little girl, Isabel in 2018, and donated her heart to medical research. Isabel’s condition, has no relation to that of Beatrix’s illness, but the family feel the tragedy keenly – after losing one daughter already.

Donors for children are rare, despite there being a long waiting list in UK hospitals.

Terry said: ‘We couldn’t believe what was happening. If I’m being honest I still can’t.

‘With her heart failing, Bea underwent major heart surgery at the Freeman Hospital to fit her with a Berlin Ventricular Assist Device, an air driven pump which takes over the work of one side of the heart while the other continues to work naturally. 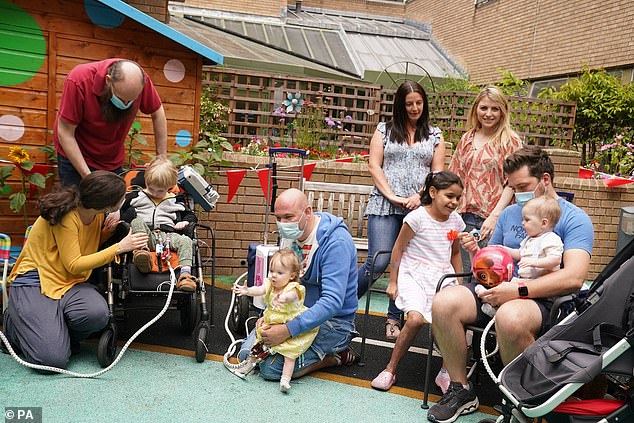 Beatrix, known as ‘Bea’, and her family are getting support from a charity called The Sick Children’s Trust as they await a donor heart 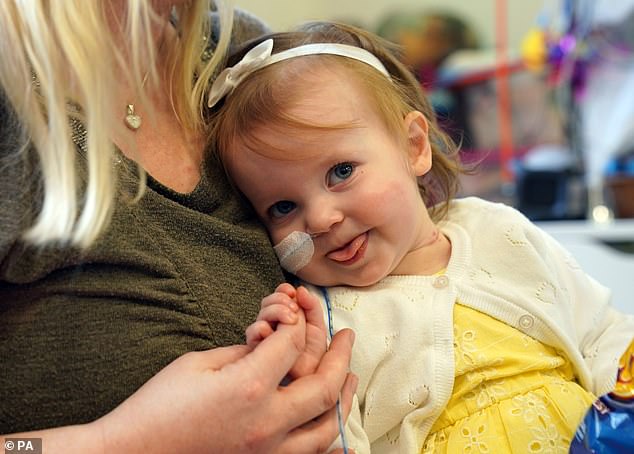 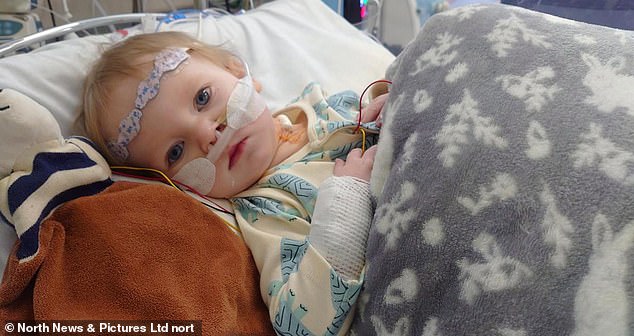 ‘While it pulled her back from the brink, it has been confirmed that she needs a heart transplant so the device will remain in place until, hopefully, a donor heart becomes available.’

The couple also experienced tragedy in 2018 when they lost their second daughter Isobel to stillbirth and donated her heart to medical research.

‘Being asked to consider donating Isabel’s heart was incredibly difficult, especially at such an indescribably upsetting moment as losing a child. 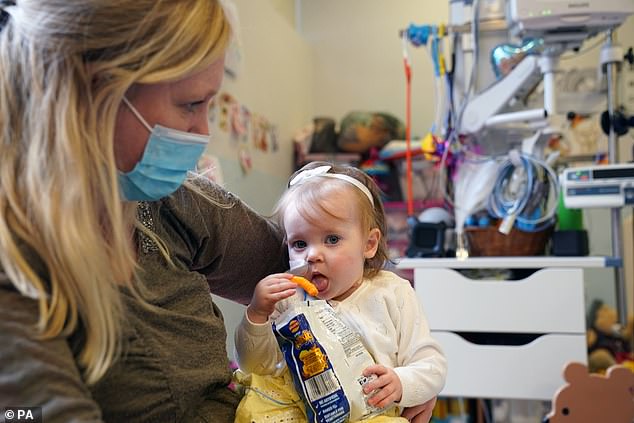 Bea has some crisps in hospital with mum Cheryl; the 18-month-old will remain at Freeman Hospital in Newcastle while a donor is found 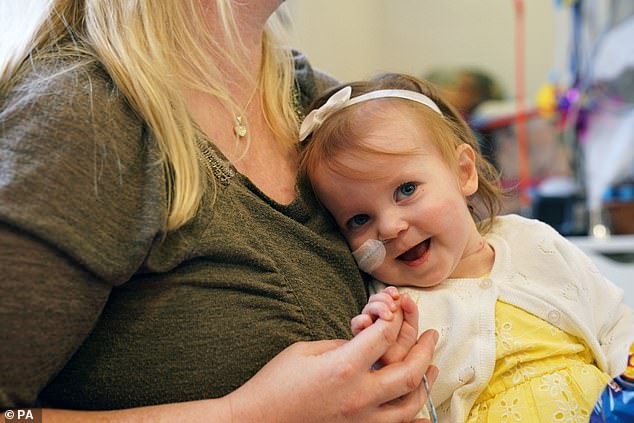 At the moment Bea is in a period of stability which needs to be maintained until the opportunity of a transplant comes up, but her family are also acutely aware that it ‘might never happen’ 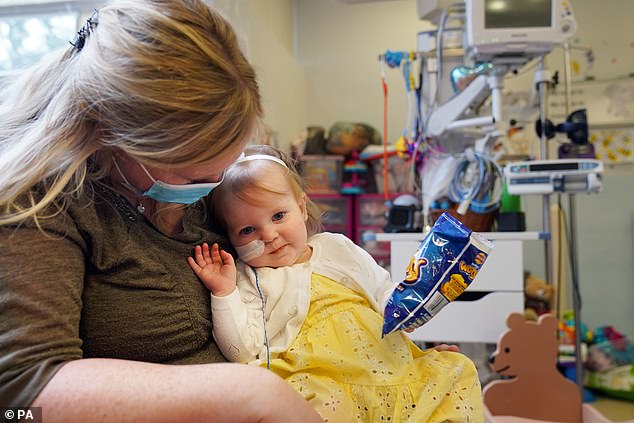 Despite the fact that there are around 204 children across various hospitals in the UK waiting for a transplant, there are only around 50-60 child organ donors a year 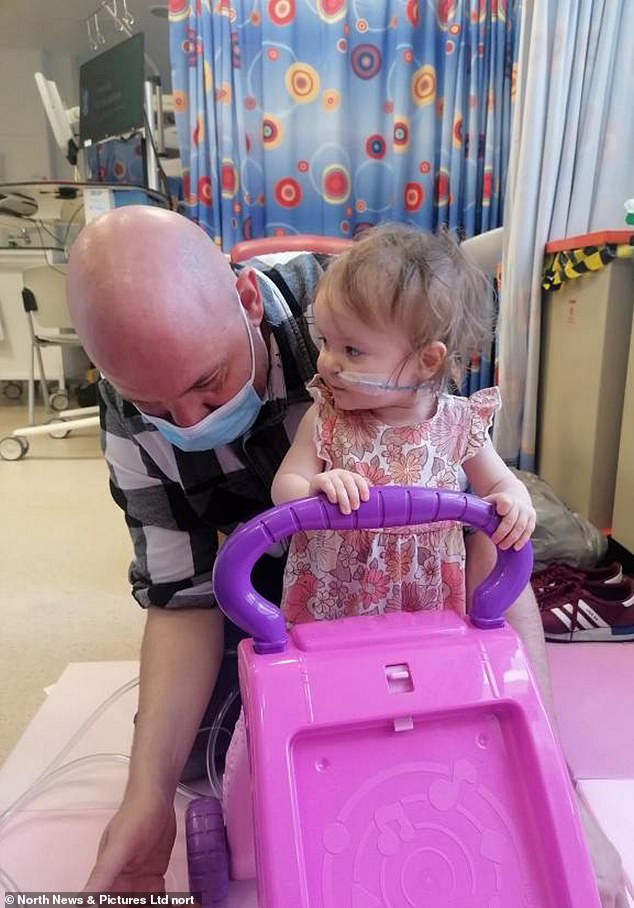 Terry, pictured with his daughter, is launching a fresh appeal to find her a new heart

‘There was so much emotion, but we made the decision to donate her heart to aid research into a rare, complex condition.

‘We wanted to help find a cure so that parents would not have to go through what we did. That was our way of hoping that something positive could come out of something devastating.

‘It seems strange to say this knowing how critically ill she is, but she’s doing okay. Her amazing personality is starting to shine through again.

‘At the minute, she is in a period of stability which needs to be maintained until the opportunity of a transplant comes up, but we are also acutely aware that it might never happen.

What is an enlarged heart?

According to the NHS an enlarged heart is a type of Cardiomyopathy which causes the muscles of the heart to become stiff.

This can lead to heart failure and could be the result of another infection.

In some cases the muscle walls of the heart become stretched and thin, so they cannot squeeze  properly to pump blood around the body to reach the organs.

The specific term for an enlarged heart is Cardiomegaly.

‘That is the reality of the situation.’

Despite the fact that there are around 204 children across various hospitals in the UK waiting for a transplant, there are only around 50-60 child organ donors a year.

Terry said :’The past few months have been a whirlwind, but thankfully the support of The Sick Children’s Trust and their Scott House ‘Home from Home’ has considerably eased the burden.’

‘It was the staff at the Freeman Hospital who told us how we had a place to stay at Scott House, with this wonderful charity giving us a room just a five-minute walk away from Bea’s ward, free of charge.

‘The biggest gift anyone can give is time, and that is something that Scott

House and The Sick Children’s trust have given us in abundance.

‘When you are facing the prospect of potentially losing your little one, you want every single second to count.

‘Scott House has become a sanctuary for us, a place away from the beeping machines on the ward where we can regroup.’