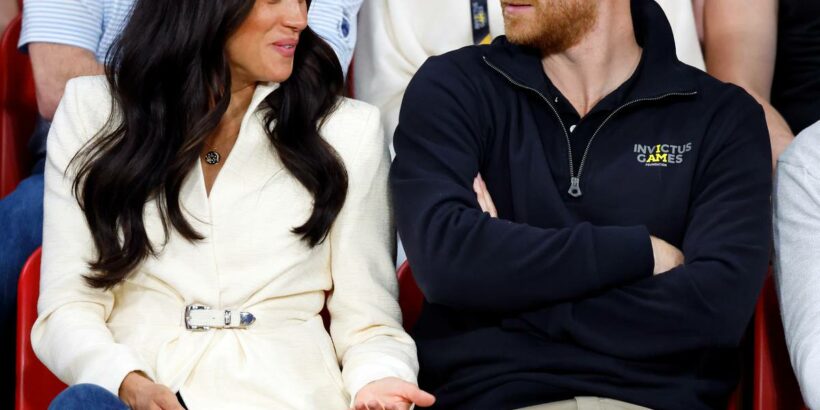 When Meghan Markle, former Suits star, blogger and one-time designer of a mid-priced clothing range for a mid-range department store, married Prince Henry Charles Albert David, she made history. Not just because she was the first woman of colour to marry into the royal family or that she was the oldest Windsor bride, but for one Gloria Steinem-approved reason: She was the first self-made millionaire to have made the unthinkable leap from civvy street to HRHdom.

Unlike Sophie Rhys-Jones, Camilla Parker-Bowles and Kate Middleton, the three Windsor brides who preceded her up the aisle, Meghan was a woman who had carved out a successful career and had the bank account to boot when she got a title and a loaner tiara.

Her decision to join the palace ranks was a 21st-century, feminist re-imagining of the Cinderella story. Now, everyone clutches their copy of The Female Eunuch briefly in pride.

Done? Good, because here is where this supposed fairytale takes a dramatic turn for the worse. Because the question we are asking today is: Has Meghan’s US career totally flopped?

On Monday, news broke that “Pearl”, the animated series the Duchess of Sussex had been working on for Netflix, as part of the $140-million deal she and Harry have with the streaming giant, has been axed.

Now, sure, the streaming behemoth has canned a slew of series from big names in the last week, making the Duchess just another casualty of the company’s stock price woes. And yes, the company’s PR machine swung into action saying that it still considered Archewell Productions a “valued partner”.

But widen the lens, step back and a discernible and concerning pattern emerges: Pretty much every one of Meghan’s various professional endeavours since decamping from royaldom has been a bit of a failure.

In June 2020, it was announced that Harry and Meghan had signed on to the Harry Walker Agency for speaking engagements. Neither has undertaken any sort of headline conference event or corporate gabfest.

In September of the same year, the Sussexes announced their megawatt deal with Netflix, reported to be worth around $140 million. In the 21 months since then, they have only announced two shows, her animated one and a documentary about his sporting championship for wounded military service personnel called “The Heart of Invictus”. Meghan’s series has now obviously been given the chop.

In December 2020, it was revealed that they had also signed on with Spotify. We will get our first real taste of the Sussexes’ podcasting prowess in the coming months with the debut of Meghan’s ineptly named “Archetypes” series, the announcement of which was greeted with about as much enthusiasm as Prince Edward rolling up to give a pep talk at a young offenders institution.

Then there was “The Bench”, Meghan’s debut literary foray. A children’s book, it was published in July last year and the same month landed on the “New York Times” bestsellers’ list for a scant three weeks. It basically made a brief blip on the publishing landscape before disappearing from view.

By contrast, a number of other picture books on the list at the same time as “The Bench” in 2021, including “Dragons Love Tacos” and “The Day The Crayons Quit”, are still on the bestseller list.

In September, Meghan still appeared to be trying her darnedest to gin up interest in the title, reading it to a class of Harlem schoolchildren in full view of the press.

Come October and she was still at it, recording a YouTube video of her reading it, an effort which has been viewed 474,000 times. (By contrast, the Queen’s speech from last Christmas has been viewed 917,000 times and that might be one of the dullest things I have had the misfortune of watching.)

Then there was her milestone 40th birthday project, a charitable mentoring initiative called 40×40. It was announced with a headline-grabbing video starring Hollywood A-lister Melissa McCarthy and a cameo performance from Harry demonstrating his juggling skills.

The launch garnered global publicity and coverage only for the whole thing to … disappear. Talk about going out with a whimper not a bang. The news section of the Sussexes’ Archewell website has not mentioned the project since.

The thing is, look back at the two years since Harry and Meghan landed on US soil to embark on their exciting new lives and the Duchess has not notched up a single discernible win or clear-cut success in a professional sense.

Back in 2020, the Sussexes were sizzlingly hot property who seemed to have Hollywood, Wall Street and Silicon Valley at their feet and a vast fortune was theirs for the making and taking.

Sadly today, the Duchess is looking like a busted flush.

“Meghan doesn’t really have a brand … You feel that she is sort of grasping somewhat at whatever is the kind of Twitter caring of the moment,” royal biographer and insider Tina Brown said in an interview with the “Washington Post” last week. “You know, it’s vaccinations, it’s Ukraine, it’s women’s rights, it’s hey, my 40th birthday, let’s have a mentoring scheme. Nothing is really going anywhere for Meghan.”

What is looking increasingly apparent is that even in the US, Meghan might be a one-woman headline-generated powerhouse but that public obsession has remained infuriatingly impossible to monetise.

And this brings us to a painful truth: Without her royal connections, Meghan does not really matter all that much.

Before Harry came along, she had never appeared on a glossy magazine cover, never had star billing anywhere and had, according to the 2020 biography “Finding Freedom”, resorted to “occasionally set up a paparazzi photo here and there or let info slip out to the press”.

All of that changed the minute the news broke that she was dating perhaps the most eligible bloke in the world. Then came the Sussexes’ all-too-brief royal chapter, followed by their “freedom” years.

The only thing that Meghan has done that has really shaken the zeitgeist in the last two years has been the Oprah Winfrey interview during which she … talked about the royal family.

Separate Meghan from her Windsor ties and the question becomes: Does anyone really care?

However, that is also a question that applies equally to Harry.

Over the weekend, the veteran British broadcaster and mate of Prince Charles, Jonathan Dimbleby, gave an interview to “The Times” and warned that, having left royal life, “they will become less and less significant as a couple”.

“As she gets older, as he gets older, they will matter less because the celebrity on which they trade will become less valuable.”

And therein lies the heart of the matter. What makes them so prized and marketable isn’t their creativity or TV show ideas or charitable zeal or them as individuals but who his family is.

Brown recently argued that the Sussexes “both completely underestimated what it was going to be like to be without … the palace platform.

“They’re now having to scramble for the deals in a way that anybody … who’s a celebrity in [this] kind of platformless universe has to do.”

That is a miscalculation that could cost Harry and Meghan dearly and the further away they get from the magic of royalty, the less dazzling and commercially attractive they look.

What is coming into focus is the inescapable fact that it is their status as intimately related to the current Queen and the next three kings which makes them valuable to deep-pocketed corporate giants. Unmoored from the monarchy, their lustre and bankability are starting to look decidedly shaky.

The couple’s, very literal, fortunes now rest on Harry’s memoir, which will obviously largely deal with life in the royal family, and his Invictus doco, a project he launched while a working member of the royal family. The biggest success he has achieved in the last few years was the release of his mental health TV series, “The Me You Can’t See”, which started when he was still a frontline royal.

Like it or not, all lucrative roads, for both Harry and Meghan, connect back to the royal family.

This gross underestimation of the power of the monarchy links, Brown argues, is something that Diana, Princess of Wales would never have made.

“She didn’t want to be out of the monarchy … She saw that the royal imprimatur was always going to be the best, you know, leverage, the best convening power to promote the causes that she cared about. I don’t know that she would have ever really advocated going off to live in Montecito without any of the patronages and any of the platform,” Brown said.

In exactly a month from today, the Queen’s Platinum Jubilee celebrations will kick off in London, and Harry and Meghan have still not announced whether they will be attending. Regardless of whether they want to see his family or not, some good old-fashioned standing on the Buckingham Palace balcony and doing a spot of waving to the masses sounds like it would be just what their careers – and bank accounts – need right now.

Daniela Elser is a royal expert and a writer with more than 15 years’ experience working with a number of Australia’s leading media titles.