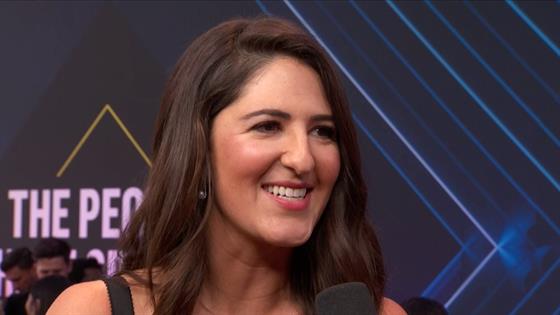 D’Arcy Carden is just living the dream in all sorts of ways.

First of all, she’s one of of the stars of The Good Place, which is not only a great show, but it’s filled with great people.

“The people are real nice there,” she told Giuliana Rancic on the red carpet at the People’s Choice Awards on Sunday. “We have a very exceptionally wonderful cast and crew and writers. It’s been too dreamy.”

Second of all, she’s about to star in the Amazon Prime series adaptation of A League of Their Own, alongside Abbi Jacobson, which she says is in the “very early stages.”

And third…tonight she gets to be in the same room as Jennifer Aniston.

Aniston will be accepting the People’s Icon award tonight and is also up for Female Movie Star of 2019, which means Carden has a chance of getting a selfie with the legendary star.

“I’m a little excited that she’s here, and we’re gonna be like, sharing the same air,” Carden said.

Carden, who plays Janet the not-a-robot assistant on The Good Place, is presenting in the Competition Show category alongside Jenna Dewan. The Good Place is also nominated for Comedy Show of 2019, and is currently airing its final season on NBC.

Since her time as Janet is wrapping up, Carden’s next task is to go back in time to 1943 to help Abbi Jacobson form the All-American Girls Professional Baseball League in an Amazon series that will “go deeper into the issues facing the country” then the 1992 movie, which starred Geena Davis, Tom Hanks, Madonna, Rosie O’Donnell, and Lori Petty.