A dating website that accepts members based on their looks is now offering plastic surgery advice to unsuccessful applicants.

US-based site BeautifulPeople.com claims nine million singletons have been rejected from the site after failing to impress its members, who vote based on appearance.

It is now giving unsuccessful applicants and wannabe members the option of paying $45 (£35) to receive feedback from a plastic surgeon on their physical flaws – and advice on the procedures they could undergo to ‘improve’ them.

One aspiring dater, Natasha Johnson, 28, from California, asked for advice ahead of applying and was told that while she had an ‘amazing smile’ and ‘open face’, she also had a ‘thickness to her abdomen, waist and back’. Miss Johnson is now planning on undergoing liposuction in a bid to boost her chance of being accepted to the site. 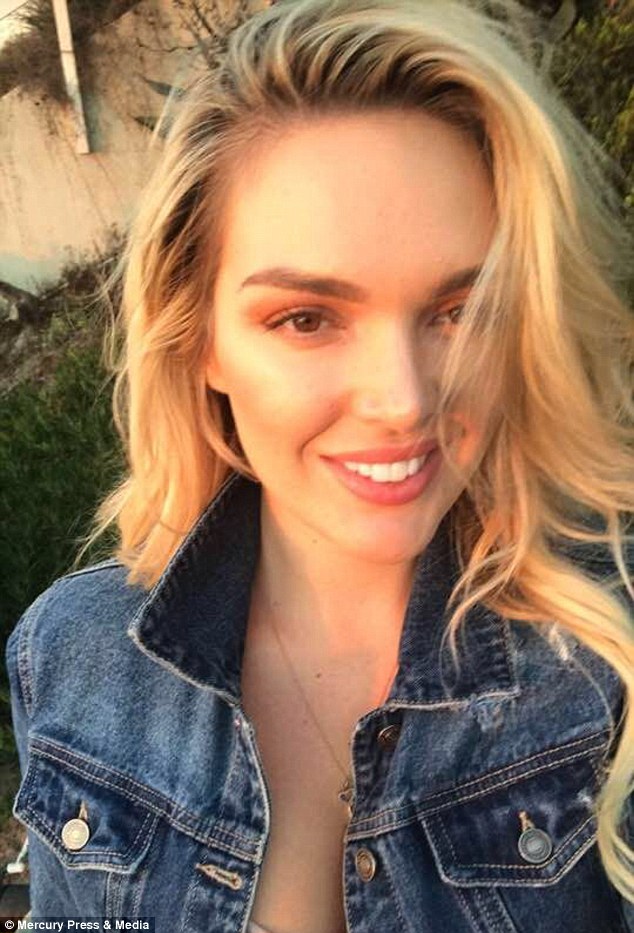 Self-conscious: Aspiring dater, Natasha Johnson, 28, from California, pictured, submitted her photo for analysis by a plastic surgeon in a bid to improve her chances of being accepted to BeautifulPeople.com. She was told she had an ‘amazing smile’ and an ‘open face’ 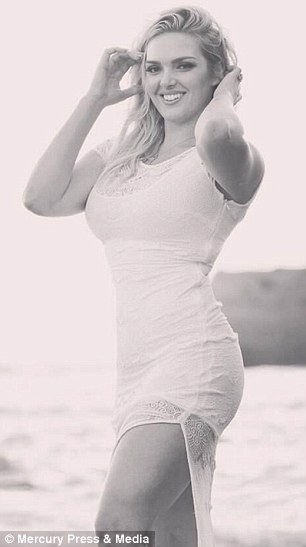 Identifying ‘flaws’: Miss Johnson paid $45 (£35) to receive personalised feedback from plastic surgeon Dr Linda Li, star of reality TV show Dr 90210. Dr Li said based on the left image, Miss Johnson showed signs of a ‘less than successful breast augmentation’ (point one) and a ‘thickness to her abdomen, waist and back’. Right, another image of Miss Johnson’s figure

Expert feedback: Dr Li provided this professional advice based on photos Miss Johnson was planning on submitting to BeautifulPeople.com. The applicant is now planning plastic surgery

BeautifulPeople.com came up with the idea after its own founder, Greg Hodge, 43, was rejected by members.

He said: ‘After eight years of being off the site, I wanted to get back on the factory floor and experience my app as a customer.

‘When I couldn’t get voted back on, it was a blow. It was a bit of a sting to be kept outside the velvet ropes, but in all fairness, I had let myself go.

‘It wasn’t good enough to just be told your application wasn’t successful. Like any break-up, you must know why.’ 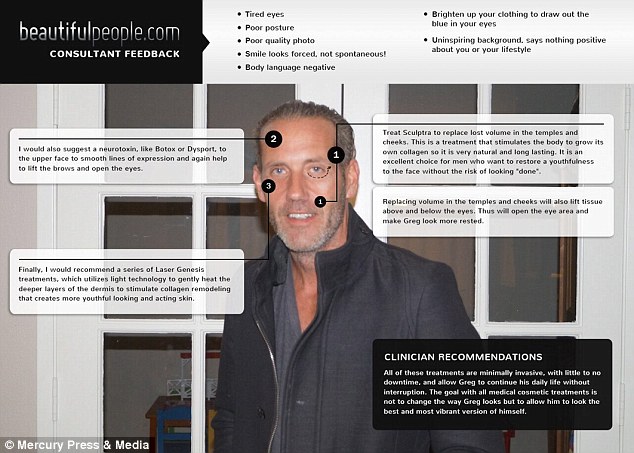 ‘Ugly truth’: BeautifulPeople.com came up with the idea of the expert advice after its own founder, Greg Hodge, 43, was rejected by members. Mr Hodge sent his photo to a Beverly Hills surgeon and asked for honest feedback. Pictured, a graphic illustrating the advice he received 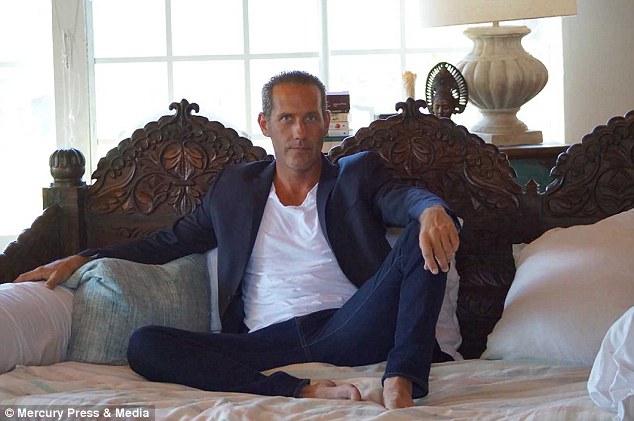 ‘Improvements’: The entrepreneur, who founded the site in 2003, had Botox and a procedure called Treat Sculptra to replace volume in the temples. His subsequent application, which included the photo above, was successful

Mr Hodge, who founded the site in 2003, sent his photo to a respected Beverly Hills surgeon and asked for honest feedback on his appearance.

The surgeon recommended that Mr Hodge have Botox, a procedure called Treat Sculptra to replace volume in the temples and laser genesis treatment to ‘create a more youthful look’.

Most common ‘flaws’ of rejected applicants

BeautifulPeople.com revealed unsuccessful applicants commonly possess at least one of the following:

3. Backdrop that fails to inspire

Mr Hodge said: ‘Constructive criticism can be a bitter pill to swallow but it did me the world of good, it got me voted back onto my site. It gave me the idea to give the same “ugly truth” to failed applicants.’

Applicants are only admitted if the existing members vote and deem them ‘beautiful’ enough.

There is no guarantee after following advice that applicants will get voted back into the site with acceptance up to the existing members who vote.

Wannabe member Miss Johnson, a businesswoman, told how unlike many potential members, she had asked for the advice before submitting her application in the hope of improving her chances when she did decide to join.

She has now booked for liposuction and corrective breast augmentation with Dr Li.

Miss Johnson, who owns a brokerage firm, said: ‘I wanted to become a member to build my social and professional network but I was nervous about the possibility of being rejected and I didn’t feel like I was looking my best. 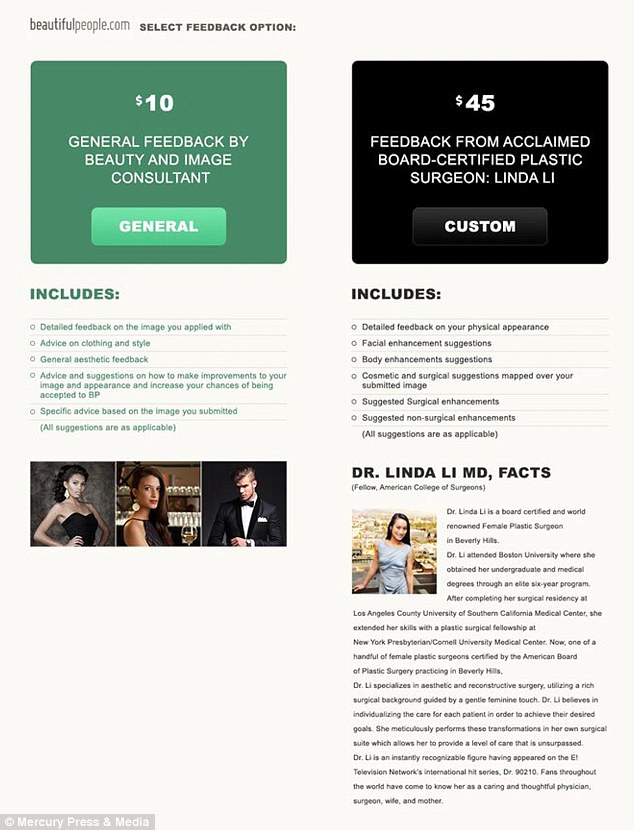 Feedback: Unsuccessful applicants can pay $10 (£8) to receive general feedback on their profile or $45 (£35) for the tailored advice from Dr Li, star of reality show Dr 90210

‘I’d previously had breast augmentation but was unhappy with the results and suffered complications. Being able to get detailed feedback from an amazing plastic surgeon was helpful and reassuring.

‘Dr. Linda was great and made me feel relaxed and secure in my decision. The changes I am making are for me to feel more confident and assured in my appearance.

She continued: ‘I never submitted to the site because I wanted to look and feel my best before I did and with the way my bust is and the stubborn fat I have, I wanted to wait until after my surgery. 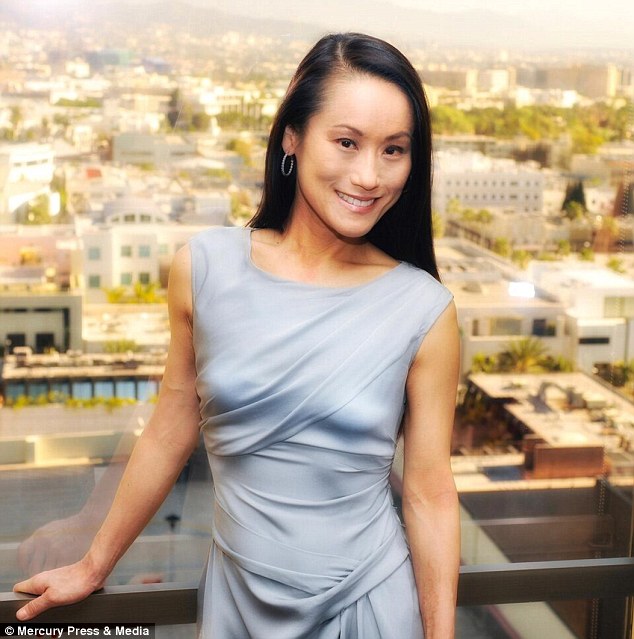 ‘This is all personal and how I approach all things in life is don’t do something unless you’re going to do or give your best.’

Dr Li added: ‘Rejection from the website means that there is something visually unappealing about the image.

‘Sometimes that’s a reflection of the photograph. Sometimes it’s an indication that physical improvement might increase the applicant’s chances for acceptance.

‘My objective and professional evaluation allows the applicant the option of safe and realistic physical improvements.

‘The most common non-surgical cosmetic procedures are Botox/neurotoxin and Juvederm/facial fillers.

‘These relatively non-invasive procedures can improve facial appearance and make a person appear more open and receptive to a new relationship.’