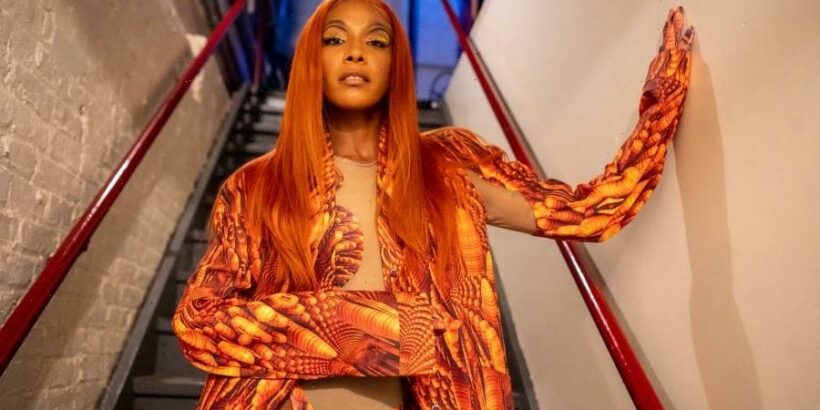 Dawn Richard’s evolution into the artist that she is today has been several years in the making.

The New Orleans-born singer and songwriter rose to prominence in 2005 after having success in the commercial pop genre with Sean “Diddy” Combs’ all-girl music group, Danity Kane, and later with Dirty Money. Following her departure from Bad Boy Records in 2011, Richard began her journey as a solo artist, and crafted a career without any creative limitations.

After her recent set at the BAM Spring Music Series in New York, the former NBA cheerleader spoke about being able to perform live again post-pandemic and the difficult yet fulfilling process of creating a live experience of this magnitude.

“It feels so good,” Richard said to ESSENCE about the atmosphere of a live show. “It’s refreshing, and to be honest – it’s my home. I love all aspects of performance in studio, collaboration, and production, but there is nothing that moves and fulfills me more than being able to interact with my audience, if even for a brief moment. It’s the safest place to me, and on stage is when I feel most like myself. It’s like a homecoming, and I never realized how much I missed it until I couldn’t have it.”

As an independent artist, many of the tasks that would fall on a tour manager, Richard has to take on herself. She hires a team to help execute her vision; which can be stressful at times, but because of her hands-on approach to every part of the production, it makes the end result that much more rewarding.

“I’ve been designing and curating this show for almost four years,” she stated. “It’s the biggest I’ve ever done so far on my own, without major label support. Being an independent artist, I’m really proud of the way it came out, and I’m so ready to show the world what I’ve done.”

Second Line: Electro Revival, was featured during her performance at the Harvey Theater. The sound of the album can be described as a genre-blending body of work that seeks to push boundaries and expand the possibilities of music as a whole. It tells a story about the quest for artistic expression, with Richard describing her album as “a movement to bring pioneering Black women in electronic music to the forefront.” To her, it is a testament to both her personal and professional growth, and a symbol for exploring every facet of life, unrestricted.

Richard elaborated on the meaning, and direction, of her critically acclaimed album, and what she’d hope to accomplish after its release last year.

“I describe it as an Electro revival – and that’s the point,” she noted. It has an electronic influence by its sound; the revival part is very much the aspect of the second line, and its celebration in New Orleans. People traditionally see the second line as a specific thing – we have the brass band; it’s a ‘homegoing’ of sorts, so that’s how people see it. But I see it as if this was a second line in 2063. The evolved version of it, and where it can go. The death of the old idea of what an artist is supposed to look like, what an artist is supposed to market themselves as, the death of that restricted thinking and a celebration – a second line – for what the new world is to become.”

As a New Orleanian, a Black woman, or a musician signed to the iconic Bad Boy Records imprint, Richard has always had to maneuver through a system filled with stereotypes and expectations. Danity Kane and Dirty Money may have been signed to a predominantly hip-hop and R&B focused label, but the sounds of the aforementioned groups were everything but.

“If you remember, Danity Kane was a pop group, but our biggest single “Damaged,” was a dance record, and it was during a time when dance wasn’t as big as it is now,” she pointed out. “And the video was set in space, which isn’t that far away from what I’m doing currently. That was one of the reasons why I enjoyed being in the group, because we were bridging the gap between genres.”

“Then, I got into Dirty Money, which incorporated a European sound, but with members that are culturally Black,” Richard continued. “So, we pushed the concept of what a Black group could be and were producing music that was really utilizing the synth. So, it only makes sense if I’m in the studio, and I’m writing the records that are pushing the envelope of culturally what you would expect music to sound like, it only makes sense to take aspects of who I was, and what I had gone through, to create what I am now.”

While it may have been these early experiences in the industry that reinforced her unconventional sound as a musician, Richard has always been an “out of the box” thinker in the way she creates. In fact, it was her intrigue with manga that gave her first group with Bad Boy its name. While they were recording in the studio, she drew a female superhero named “Danity Kane,” which sparked Combs’ interest, because he felt that it was a representation of the group’s diversity.

As she progressed in her career, Richard’s passion for animation never waned. In 2016, she began working with Adult Swim as a content creator, and four years later she announced her partnership with the company as a creative consultant, collaborating with Black animators and artists to create content for the channel, and public displays of art, especially in the city of New Orleans.

Her passion for the ‘Crescent City’ shines in her life, as well as in her music. With the emergence of bounce on a national scale, the 9th Ward native gave ESSENCE some insight into the importance of spreading the different subsets of the New Orleans sound to a global audience.

“I’m really excited that we are on the map, and that we are respected – it should have happened a long time ago,” the singer stated. “People like Big Freedia are finally getting their just due, but there are other artists – like Mia X and Katey Red – that were the staple for what the sound is now. We still see artists who are from different places incorporating New Orleans culture within their music, and it’s been beautiful. But I think it hits different when it’s local: like Lucky Daye, Tank and the Bangas, and PJ Morton; ringing true to the sound.”

“It means so much more to me because I am not only bringing the city with me, but I am bringing listeners to a place that we haven’t been highlighted in,” Richard said of her responsibility as an artist. “New Orleans has not been known for electronic music, or afro-futurism – even though it is very present there. It’s overlooked because we have been stereotyped into just hip-hop, R&B, soul, and jazz; but there is more to us. My hope is that I can be a beacon for the other side of New Orleans.”

Her approach to the recording process also serves as a metaphor for how she goes about life, and how one should never take for granted the freedom to do, think, and be whatever your heart desires.

“In everywhere – and in anything – my city can be present,” she emphatically stated. “We can exist beyond the genres that people box us into.”