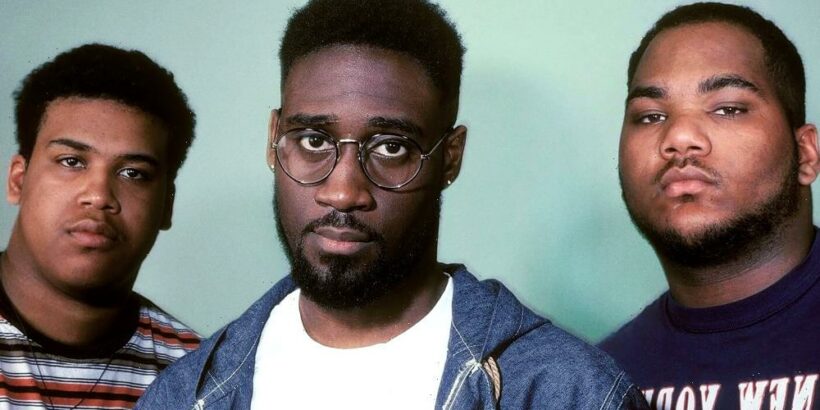 The music of hip-hop pioneers De La Soul — whose galvanizing 1989 debut, “Three Feet High and Rising,” is one of the genre’s greatest albums — will finally be available on streaming services for the first time on March 3, the group announced on Tuesday. The catalog, which has been held up for decades by complicated sample clearances and other legal issues, was acquired by Reservoir Media as part of its acquisition of the Tommy Boy Records catalog; Reservoir will distribute the catalog via its Chrysalis Records.

The catalog is preceded by the release of their single “The Magic Number” on Jan. 13 — the song, the opening track of “Three Feet High and Rising,” was used in the end credits of the 2021 blockbuster film “Spider-Man: No Way Home” but was not legally available at the time.

With 1989’s “Three Feet High and Rising,” the Long Island trio created one of the truly groundbreaking albums in hip-hop history, bringing a happy, psychedelic, flower-bedecked vibe — dubbed “the D.A.I.S.Y. Age” — to a genre that had largely been musically and lyrically aggressive and/or self-aggrandizing up to that point. With songs like “Me Myself and I,” “Say No Go,” “The Magic Number” and the earlier single “Plug Tunin’,” the album was certified platinum, reached No. 1 on the Billboard R&B/Hip-Hop chart (and No. 24 on the Billboard 200 albums chart) and is universally recognized as one of the best and most influential albums in hip-hop history.

But the album and the group’s other early recordings for decades were mired in legal issues with Tommy Boy (read more about that here), stemming both from the extensive use of uncleared samples — a field that was an unexplored Wild West at the time — and the group’s contract with the company, which the members signed when they were teenagers. Consequently, De La Soul’s classic early recordings are not available on streaming services; the group’s members claimed in 2019 that per their contract, they would receive just 10% of streaming revenue and declined to sign off. Along with much of late R&B singer Aaliyah’s catalog — a standoff that is also, apparently, nearing resolution — it remains one of the few remaining major-artist holdouts from streaming services.

De La Soul said, “We can’t believe this day is finally here, and we are excited to be able to share our music with fans, old and new. Golnar, Rell, Faith and the Reservoir team have been great partners in this entire process. We’re grateful that our relationship with them all has enabled this to happen.”

Faith Newman, Reservoir Executive Vice President of A&R and Catalog Development, added, “As someone who has devoted my life to hip-hop for over 30 years, my relationship with the guys in De La Soul dates back to my early days in the industry, and I can attest to how influential their catalog is to the genre.” She added, “When Reservoir acquired Tommy Boy, the first call we made was to De La Soul. We vowed to bring their music to streaming, and it means the world to our team to make good on that promise and expose a whole new generation of listeners to one of the most important catalogs in hip-hop history.”

Reservoir President and Chief Operating Officer Rell Lafargue also commented, “Bringing De La Soul’s music to streaming services is a big moment for Reservoir, Chrysalis, and fans everywhere. We identified this opportunity when we were in the preliminary stages of acquiring Tommy Boy. Over the past 18 months, we have worked tirelessly with De La Soul, maintaining a heightened attention to honoring the group’s original musical details, including bringing Prince Paul and the original team to the studio to prepare the catalog for streaming.” He added, “It is a real testament to our team and the group that we are able to execute these plans together. We couldn’t be prouder to embrace De La Soul’s historic artistry and support them in sharing their music with the world.”

To celebrate the momentous initiative, De La Soul will digitally release their hit single “The Magic Number” on January 13th, 2023. The Chrysalis team, led by Chief Executive Officer Jeremy Lascelles, will devote comprehensive marketing support to the group with a robust release campaign that, among key events and activations, includes the release of These items are now available for pre-order on wearedelasoul.com.

Comprised of Posdnuos (Kelvin Mercer), Trugoy (David Jude Jolicoeur), and Maseo (Vincent Lamont Mason Jr.), De La Soul formed in Long Island, New York in high school when they caught the attention of producer Prince Paul. On March 3, 1989, they released their debut album, 3 Feet High and Rising, which reached #1 on Billboard’s Top R&B/Hip-Hop Albums, was certified Platinum by the RIAA, and is consistently placed on lists of the greatest albums of all time by critics and noted publications. The album was inducted into the Library of Congress’ National Recording Registry, a list of sound recordings deemed “culturally, historically, or aesthetically significant.” 3 Feet High and Rising features some of De La Soul’s most beloved tracks, including “Me Myself and I,” “The Magic Number,” “Buddy,” and “Eye Know.” In 2021, “The Magic Number” gained new recognition when it was featured in the closing credits of Marvel’s blockbuster film Spiderman: No Way Home, a synch placement secured by Reservoir’s team.

De La Soul subsequently released eight albums, including Gold-selling De La Soul is Dead and And the Anonymous Nobody… (2016). The group has been nominated for several Grammy awards, including Best Rap Performance in 1990 for #1, Gold-selling hit “Me Myself and I” and Best Rap Album in 2017 for And the Anonymous Nobody… In 2006, the trio won a Grammy for Best Pop Collaboration with Vocals for their collaboration with Gorillaz on “Feel Good Inc,” which also received nominations for Record of the Year and Best Short Form Music Video.