Lawyers assisting Victoria's hotel quarantine inquiry have squarely blamed a multitude of failures in the state government program for the deaths of 768 people and the infection of 18,000 more.

On the final day of hearings into hotel quarantine, the inquiry's counsel asked why the state’s three most senior public servants involved in the program failed to “properly discharge their obligations” to keep their ministers informed. 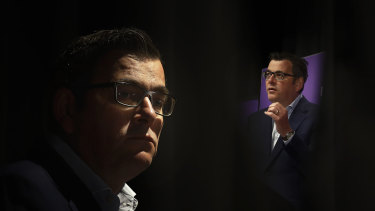 Three of Premier Daniel Andrews’ top bureaucrats have been singled out by counsel assisting the inquiry.Credit:Getty Images

The failure to contain coronavirus within the compulsory quarantine system in Victoria sparked the state’s second wave of infections and the stage-four shutdown, with devastating health and economic ramifications.

The final summaries to the inquiry put by three counsel assisting on Monday painted a picture of poor decision-making, lax oversight and training of private security guards and inadequate treatment of returned travellers, all stemming from failure to adopt a health response rather than a "logistics" response.

Counsel assisting Ben Ihle said: “One only needs to pause and reflect on those figures to appreciate the full scope of devastation and despair occasioned as result of the outbreaks. The board will comfortably find the hotel quarantine program failed to meet its primary objectives.”

Rydges on Swanston, the hotel where hundreds of COVID-19-positive travellers were housed, had no special measures in place to protect guards, hotel workers, guests and, ultimately, the broader community, counsel assisting the inquiry argued.

Despite the errors, counsel assisting emphasised they were not alleging that the problems were caused by bad faith or corruption. They also found that the decision not to bring Australian Defence Force personnel into the system was a reasonable one at the time.

On the crucial policy to put security guards in place at the hotels, counsel Rachel Ellyard said it was not possible to say who had made the decision, and that the consensus to do so had come from a "creeping assumption" over several hours on the afternoon of March 27, when the program was being set up. 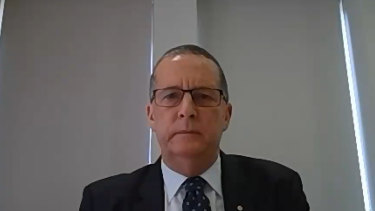 Chris Eccles, secretary of the Department of Premier and Cabinet, giving evidence at the inquiry.

Lawyers assisting the inquiry said that the state’s most senior public servant, Chris Eccles, Health Department chief Kym Peake, and Jobs Department secretary Simon Phemister may not have adequately raised serious issues over the quarantine program with their ministers.

Mr Ihle said: “Those secretaries gave a range of reasons for not briefing their ministers. Those reasons included the following: ‘I didn't think it was part of the portfolio’ and ‘I wasn't across the details of the contract’.”

There were “significant issues which should have been brought to the relevant minister's attention,” Mr Ihle said.

The Age asked Premier Daniel Andrews and the ministers for Jobs and for Health whether their departmental secretaries retained their confidence. A spokeswoman for the Premier and the ministers said the inquiry would continue to take submissions over the course of the week and would hand down its findings in early November.

"The government awaits the report," she said. 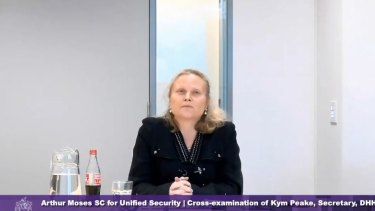 Health Department boss Kym Peake was questioned about why she did not brief her former boss Jenny Mikakos, who quit as health minister on Saturday, on key concerns.

Mr Andrews has previously said he has confidence in Jobs Minister Martin Pakula and Police Minister Lisa Neville, and has backed his department secretary, Mr Eccles.

The inquiry heard that insufficient attention was given to the health and safety of both those working in hotel quarantine and those detained in it.

Tony Neal, QC, said the program had failed to engage and embed public health experts. The COVID-19 testing regime of returned travellers was inadequate and in some cases, detainees were released even though they were positive. The cleaning and infection control within the hotels were also insufficient, Mr Neal said.

The inquiry heard it was also not appropriate that the state, through the Jobs Department, outsourced the responsibility of infection control and training in personal protective equipment to security firms. 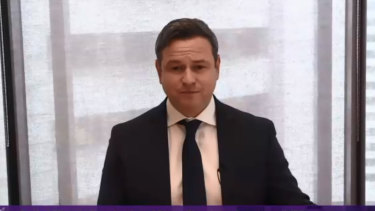 Ms Ellyard said: "Responsibility for managing the risk of infection and providing for the safety of those involved in the program should have remained with the state."

However, the inquiry found that Emergency Management Commissioner Andrew Crisp's decision that Victoria did not need assistance from the Australian Defence Force was a “reasonable conclusion for Mr Crisp to come to on that day".

The use of Australian Defence Force troops for hotel quarantine has been a sticking point both politically and in the inquiry. Prime Minister Scott Morrison said Defence personnel were on offer from the start, while Mr Andrews told the inquiry on Friday he was "generally aware" ADF support was available, but did not believe Victoria would be receiving extensive help.

Mr Crisp made the call in the state's first hotel quarantine meeting on March 27 that there were enough resources, and "boots on the ground" were not required. However, counsel assisting said that a later offer of Defence assistance from the federal government to Department of Premier and Cabinet secretary Mr Eccles on April 8 should have been passed on the Premier.

The ADF was familiar with command and lines of control that "would have lent itself to the expectation of clear lines of accountability and follow-up", Ms Ellyard said.

Responsibility for managing the risk of infection and providing for the safety of those involved in the program should have remained with the state.

More than 30 security guards, including those subcontracted by Unified, caught COVID-19 while working in the Rydges on Swanston and the Stamford Plaza hotels before the virus spread into the community.

Ms Ellyard said it was clear the Department of Jobs, Precincts and Regions did not have adequate oversight of security contractors in the quarantine program. This department placed the responsibility to guard more than half of the 20 hotels used in the program with one company, Unified Security, which used almost entirely subcontracted guards. 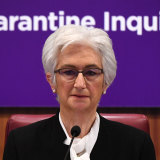 Former judge Jennifer Coate is due to deliver her report in November.Credit:Getty

Unified was in charge of Rydges on Swanston, which was a designated "hot hotel" for people already infected, but no special measures were put in place to address this additional risk, the inquiry heard.

Mr Pakula told the inquiry it was not common practice that he would be aware of contracts the government was entering into, but Ms Ellyard said such outsourcing "shouldn't have happened without appropriate ministerial consultation or knowledge".

On Saturday, Jenny Mikakos resigned as Victoria's health minister after Mr Andrews told the inquiry the day before that he held her "accountable" for the ill-fated program that unleashed Victoria's disastrous second coronavirus wave.

Mr Ihle, in his presentation, said genomic sequencing and epidemiological investigations had shown the escape of the virus from quarantine hotels was responsible for 99 per cent of recent Victorian COVID-19 infections.

"On 23 May, Victoria's COVID-19 death toll was 19 people … as of today, the total number of COVID related deaths in Victoria is 787. The failure by the hotel quarantine program to contain this virus is, as at today's date, responsible for the deaths of 768 people and the infection of some 18,418 others."

The chair of the inquiry, Jennifer Coate, will hand her report to Mr Andrews by November 6.

Asked on Monday about when the findings of the report would be made public, Mr Andrews said his government “might want to look at [the findings of the inquiry] for a short period of time and then have a response and announce it together”.