Man, 30, who’s had to walk on the side of his left foot since he was a teenager due to a huge ‘painful’ growth resembling ‘a little bald man’ finally has it removed in My Feet Are Killing Me!

Stomach-churning footage has revealed the moment a doctor removed a huge growth resembling ‘a little bald man’ off a patient’s foot in My Feet Are Killing Me!

Tonight’s episode of the Quest Red show features Paul Wright, 30, from California, who at face value, is like your average guy. Tall, handsome, holds down a good job and has a loving girlfriend.

Things, from the outside-in at least, look perfectly normal for Paul – but since he was a teenager, he’s been hiding a painful secret on the bottom of his foot.

Since he was in Middle School, Paul has been living with a giant, round growth on the underside of his left foot and, despite visiting several doctors, he has no idea what it is. 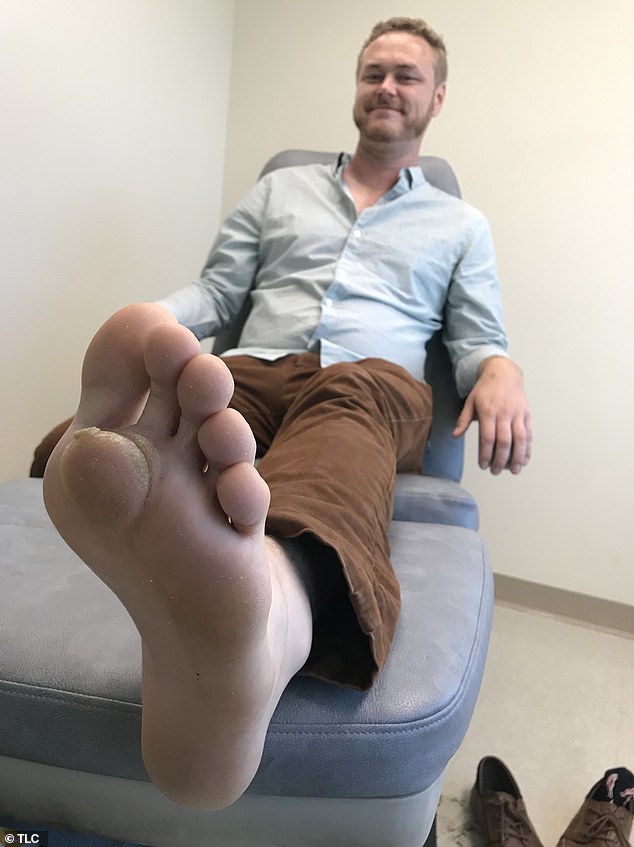 Paul Wright, 30, from California, has a huge growth resembling ‘a little bald man’ removed off his foot in tonight’s episode of My Feet Are Killing Me! 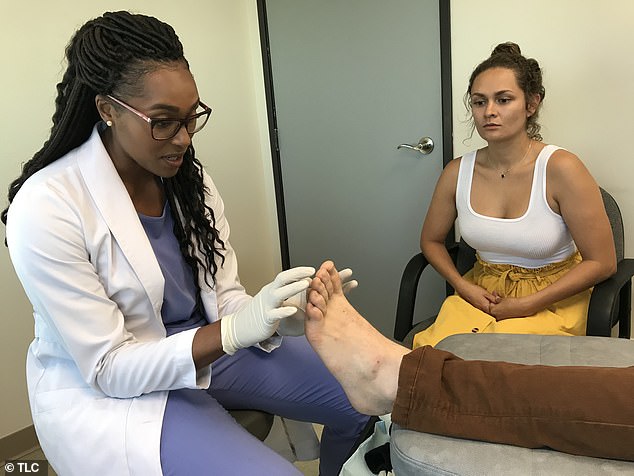 Paul explains that the growth started out as a small pimple which grew over time. Pictured, Lauren looks on as Dr. Ebonie continues to examine the nub

‘A lot of people have been weirded out by it,’ he explains. ‘It could be a growth, it could be a toe, it could be a strange cyst that protruded out of my foot. It kind of looks like the most grotesque bald headed man popping out!’

Starting out as a small pimple, the lump grew over time before turning into, as Paul puts it, a ‘giant monstrosity. It’s like its own appendage.’

While an eyesore, the lump also causes Paul a great deal of pain and discomfort, forcing him to walk on the side of his foot.

‘It’s painful, it’s almost like there’s pressure on the inside underneath it,’ he says. ‘There’s actually a sort of burning sensation as well. Everyday I feel that pain, so I have to walk on the side of my foot, and as a result of that it hurts my knees.’

After leaving the lump undiagnosed and untreated for so long, Paul’s started to develop concerns that it might be more sinister than meets the eye.

‘The older I’ve gotten and the more painful that it’s become, I’ve started to worry that it could be something serious,’ he explains. ‘I’m terrified that this is cancerous, I guess there’s the potential that I could lose my foot. That’s terrifying to me.’ 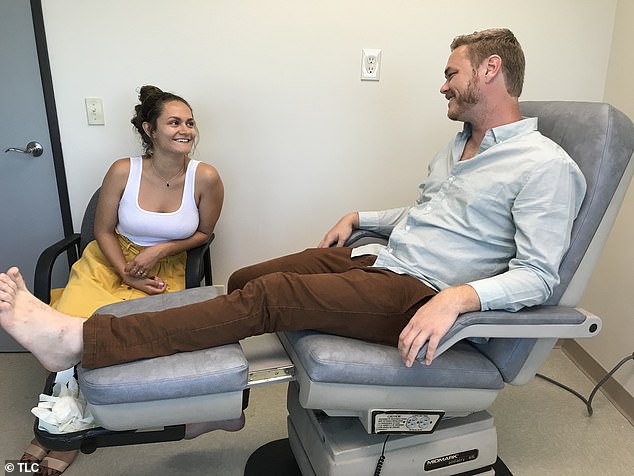 After leaving the lump undiagnosed and untreated for so long, Paul explains he started to develop concerns that it might be more sinister than meets the eye. Pictured, Paul and his girlfriend Lauren smile at each other as they wait for Dr. Ebonie in the consultation room 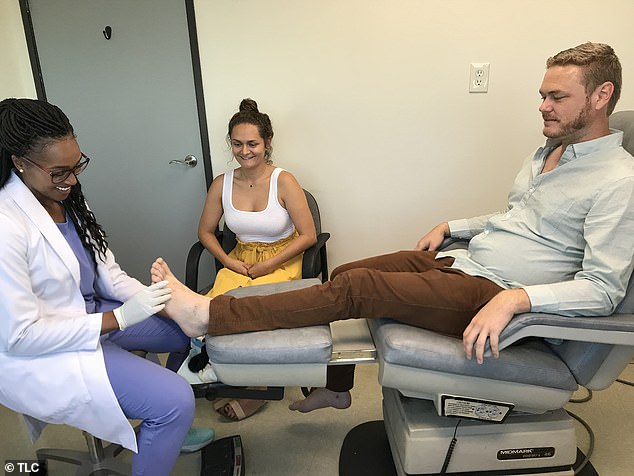 Paul explains the lump causes him a great deal of pain and discomfort – and forces him to walk on the side of his foot. Pictured, the expert looks at Paul’s foot

With his health on his mind, Paul decides to bite the bullet and travels to Orange County, California, to see foot and ankle surgeon Dr Ebonie Vincent for some answers.

‘I actually have no idea what this thing is,’ she says, startled. ‘For the majority of it, it did feel pretty soft, like skin, but it did have this calcification or possibly even bone that I could feel that was very hard.’

A perplexed Dr Vincent explains Paul’s options to him, suggesting that excising the lump and testing it would be their best shot of diagnosing the lump.

‘We won’t know for sure what it is unless we take it off and send it to pathology, but you cannot rule out any type of cancers without for sure knowing what this is,’ she explains.

Bravely agreeing to go through with surgery, Paul’s ready to say goodbye to the little bald man growing out of his foot.

‘If it gets this thing off my foot, then I feel great about it,’ he smiles.

Fast forward several weeks, and it’s the day of Paul’s surgery. Ever the joker, Paul cheekily puts in a requests to keep the lump once its removed.

‘I’ve always threatened to my sister and nieces that if I got it back I would cook it up in a skillet and serve it to them! They’re not too amused by that!’

After putting Paul under general anaesthetic, the expert gets to work, carefully snipping and cutting around the lump. 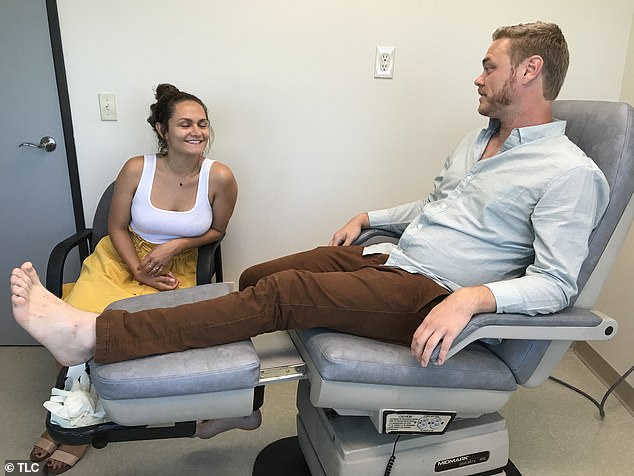 During his follow-up appointment, Paul is relieved to hear that the results came back showing the lump is benign. Pictured, Paul and his girlfriend Lauren smile at each other as they wait for Dr. Ebonie in the consultation room

‘I don’t believe anything is a stalk or anything going out of it, so there’s nothing there that I can see that would be a source of regrowth,’ she says, delivering some positive news.

After some more slicing and dicing, Dr Vincent successfully removes the growth, and quickly sends sit off to pathology for testing.

Closing up the wound, it’s job done until Paul’s follow-up appointment – where Dr Vincent takes off his bandages and is pleased with the results of her surgery.

‘It looks like it’s healing really, really good,’ she says. ‘We sent in the skin tag to pathology to see whether or not it was cancerous, that was the biggest thing we wanted to rule out. The pathology report came back and everything is benign!’

‘There was no bone in there, unfortunately I can’t say it was a toe, it’s just a benign skin tag.’

After years of waiting, Paul finally has the answers he’s been looking for, and he’s now keen to get on with the rest of his life.

He adds: ‘It just feels great to be able to walk around, this has been the best medical experience of my life!’

My Feet Are Killing Me airs 10pm on Tuesday exclusively on Quest Red, or stream on dplay