Victorian MP Tim Smith addressed a press pack on Wednesday afternoon to defend his frayed reputation, in a dramatic first appearance since he crashed his Jaguar into the side of a family home after drinking “quite a few glasses of wine”.

Here are the most memorable quotes from the hour-long press conference.

“Recollections may differ … I’m not going to undermine the sanctity of a private conversation.”

“Does one error mean a career is over forever? … Is this error of judgment that I’ve made, this enormous, terrible thing that I’ve done, this selfish act, is that worthy of losing my entire career? … I think all of us in life genuinely do deserve a second chance.”

“Politicians, from time to time, call on each other to resign.” 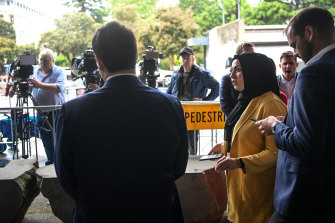 “Put it this way, I’m not going to be on the frontbench in the next 12 months, that’s absolutely true.”

“Matthew Guy is a great guy, he’s my friend, I love the guy.”

“We did apologise to the family … there were a number of people there on my behalf on the evening … Caroline from my office was there, she lives not far away … There was apologies made on the evening, made by people on my behalf, I apologised on Sunday morning.”