The world can be a really awful place. If you pay attention to the news — and I mean if you, like, literally, read just one top news headline — that much is clear. It can be hard to find news that makes you feel hopeful and positive about the present… and the future… and humanity in general. But then, every once in a while, something lovely and innocent and adorable happens that makes you feel good, even if just for a few moments. On May 22, that something is this: as reported on BBC, a dog befriended nine orphaned baby ducks on the grounds of Mountfitchet Castle in the U.K, and the photos are honestly almost too adorable to take in.

According to BBC, dog’s name is Fred, and he is a perfect 10-year-old Labrador who embodies everything happy in this world. Fred has recently become the father to nine tiny ducklings at Mountfitchet Castle, which is a tourist attraction near London’s Stansted Airport in Essex, in the United Kingdom. The castle is home to many rescued animals, although Fred is the "resident dog."

As for how Fred came to be the unofficial bestie of these nine ducklings, according to BBC, the staff had noticed that the ducklings weren’t with their mother, and they couldn’t seem to find her. One spokeswoman told BBC they were "very worried" when the mother disappeared on Thursday, because the ducklings were "looking a little bit lost."

Luckily, Fred, one of my new favorite animals ever, stepped in to take over. A staff member said to BBC, "Fred… immediately took to them and has been babysitting ever since." Staff members have said that Fred and the ducklings have been cuddling, and that they’ve also been following Fred around — even going into the castle moat for a swim with him and sleeping in his dog bed together. Can you imagine seeing that in person? The cute factor would be completely off the charts. 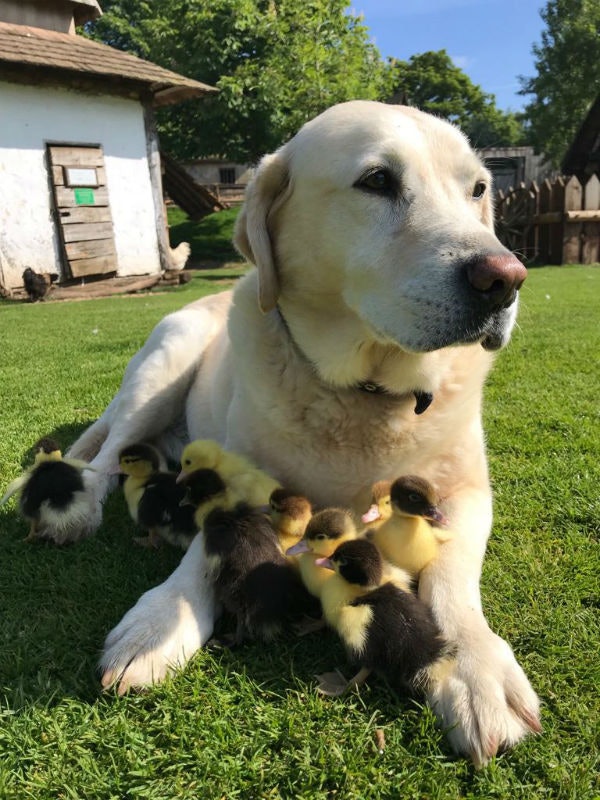 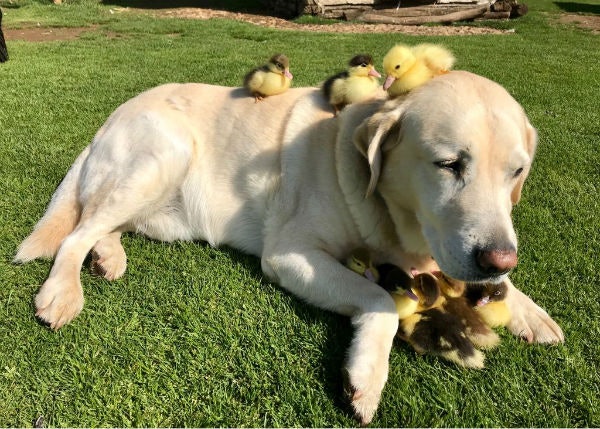 Animals adopting other animals is also instinctual. Jenny Holland, author of Unlikely Friendships, told National Geographic, "Instinctively animals take care of young to help them survive and therefore pass on the family DNA. So I think there’s some hard wiring in there that leads them to offer care to another animal in need. If it isn’t a relative, there may be some wires crossed, but I think the behavior comes from the same place."

As for Fred and the ducklings? According to BBC, Goldsmith believes they’ll only be together for a few more weeks, until the ducklings will be free to leave the castle if they’d like. But who knows? I’d prefer for them to stay friends forever — just like a Disney movie.