Amid a series of campaign appearances in Utah on July 24, Donald Trump Jr. took time to shoot Desert Tech rifles and appeared in promotional images for the company, which is owned by a prominent member of a polygamous sect. The government is currently trying to seize the company’s headquarters, which is owned by other members of the sect who entered guilty pleas in a $1.1 billion fraud scheme.

In photos posted by the company to Instagram and Facebook, Trump Jr. is seen wearing a Desert Tech hat, posing with the company’s founder, Nicholas Young, and firing the company’s sniper rifles. A marketing video on YouTube also includes an image of Trump Jr.

“Awesome time guys. Can’t wait to do it again soon,” Trump Jr. replied to one post on Instagram, adding three American flag emojis. Beneath another, he wrote, “Great being with you guys. Awesome stuff.” 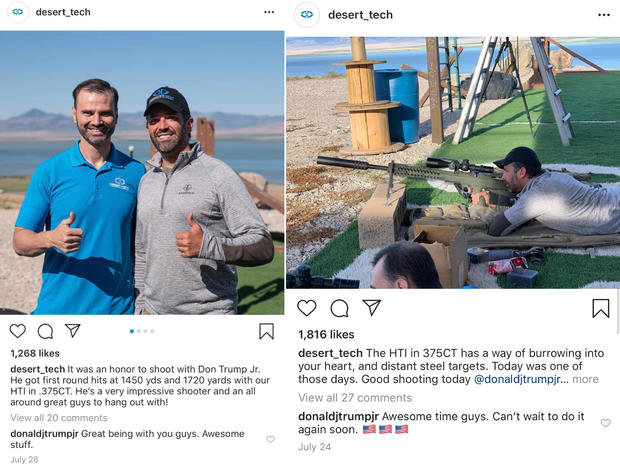 Young has an influential position in The Order, which formed in 1935 after splintering from the Church of Jesus Christ of Latter-day Saints, and is also known interchangeably as the Kingston Group and the Davis County Cooperative Society.

A former member of the group who has spent years trying to shed light on what she says are abuses of women and children, as well as widespread financial fraud, harshly criticized Trump Jr.’s appearance with Young.

“It’s honestly just really disheartening because as somebody that has come from the Kingston Group, and I was born and raised there….It’s just really frustrating to see that they’re hanging out with the president’s son because, as somebody that’s trying to raise awareness to what’s going on there, it almost feels like they’re kind of protected in a way, like what they’re doing is OK,” said Mary Nelson, 25, who appeared in an episode of CBS News’ “Whistleblower” series in May 2019.

The Order has been deemed a hate group by the Southern Poverty Law Center, an advocacy group that monitors extremist activity, because of its teachings that disparage Black people and the LGBTQ community. There are as many as 7,500 members, and children are typically raised and educated within the religious sect. Followers often take part in an internal banking system that can land them in debt beginning in childhood.

The group acknowledges on its website that some members “have chosen to enter into lifelong relationships that include multiple women.”

The Order says that minors who take on debt are required to have adult cosigners, and denies being a hate group, saying, “We believe regardless of their race or heritage, people have a right to take pride in their own heritage while maintaining a relationship of mutual respect for those who may be of a different race or culture.”

The Order’s most privileged members, including Young, belong to a small group called “Numbered Men.”  Young appears in an official Order portrait as a Numbered Man, and he identifies himself by his name and number in a video obtained by CBS News in which Young delivers a sermon.

In the 6-minute video, Young paints a dark picture of life outside The Order’s sheltered society. “I’m Nicholas Young, Number 72,” he begins, later adding: “If I was to, you know, meditate and pray about protecting The Order from the evil forces, (feminists) would be the greatest forces that I would want to fight against, because they would infiltrate our young children and destroy The Order from the inside.”

Founded in 2007, Desert Tech makes rifles and firearm accessories. Desert Tech’s headquarters in West Valley City, Utah is owned by Jacob Kingston, Young’s cousin who is also a “Numbered Man” and former CEO of Washakie Renewable Energy.  The U.S. government said in a July 2019 federal court filing that it intends to seize the building as part of an attempt to recover government funds lost to fraud by Jacob and another Washakie executive. 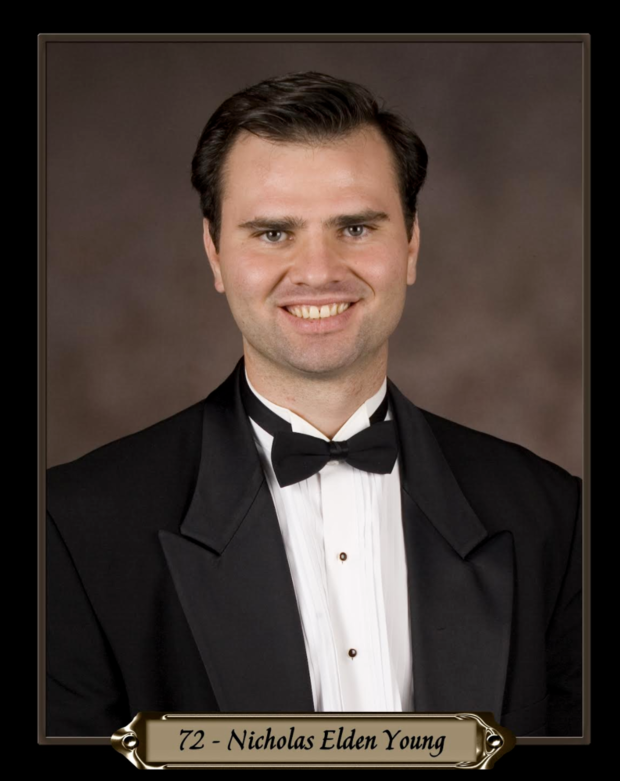 Prosecutors have said Washakie used the building to launder money.

The government’s attempt to recover these assets is ongoing. Desert Tech and Young were not accused of crimes. Kingston entered a guilty plea to fraud and obstruction of justice charges in July 2019 and faces up to 20 years in prison.

In an email to CBS News, a spokesperson for The Order said it “categorically denies” any connection to fraud.

There is no suggestion the case was discussed during Young’s outing with Trump Jr.

Young said in a phone call with CBS News that he had previously approached Trump Jr. via Instagram direct message.

“Just told him if he’s ever in town, we’d like to give him a chance to test our products and try them out since he’s a big shooting enthusiast. And so he says, ‘OK, when I’m in town, I’ll try to look you guys up,'” said Young.

Young said he followed up with the president’s son after seeing he’d be in town July 24, when Trump Jr. attended an event for a Republican congressional candidate and appeared at a rodeo. Young described the event as a preplanned “industry day,” in which gun manufacturers show off their products.

“It’s not really newsworthy stuff. I mean, it’s just going to the range and shooting. So I didn’t expect to have everybody be calling me,” Young said.

But Young did acknowledge having Desert Tech’s marketing team on hand to photograph Trump Jr. wearing a Desert Tech hat and using its firearms.

Desert Tech is a private company that counts the U.S. Army among its customers. In 2018, it sold the military $105,000 in rifles destined for the Czech Republic, according to Department of Defense records. It also has at least one overseas subsidiary, Neco Desert Tech Defence, based in India, according to that country’s Ministry of Corporate Affairs. Young did not reply to questions about the company’s overseas weapons sales.

CBS News sent Trump Jr. a list of questions about the event, Desert Tech’s use of his image in marketing materials, and about Desert Tech’s connection to the fraud case, and The Order.

A statement sent by Andy Surabian, a spokesperson for Trump Jr., accused CBS News of “a pathetic and transparent attempt to smear by association the President’s eldest son.”

“Don routinely gets offers from 2nd amendment enthusiasts from around the country to go shooting and it’s not uncommon for him to take them up on those offers when he’s able to. He had never met the owner of Desert Tech prior to going shooting with him, has no personal relationship with him, only spoke to him about shooting and CBS has no reporting to suggest that he did anything besides spend an hour or so on the gun range with the owner of a prominent gun company, yet they have decided to dredge up allegations from this man’s private life,” Surabian said.

Mary Nelson was raised in The Order — one of 200 kids, she claims, by a man with 18 wives — and worked for its internal bank. She says she left The Order in 2013 when her family demanded she marry a second cousin against her wishes. Soon after, she and her now-husband Bryan began sharing information with government investigators, which ultimately led to the Washakie fraud case. They brought a whistleblower lawsuit against The Order in May 2019. The case is pending. 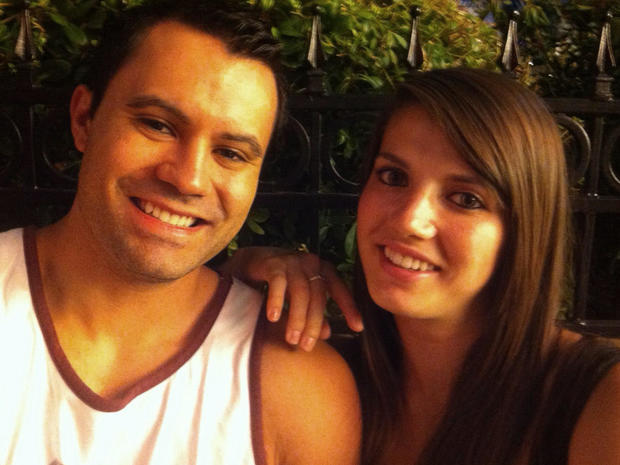 She said she thinks someone of Trump Jr.’s stature should look into the backgrounds of the companies he appears with.

“Even if it was just a coincidence that they met up together to shoot guns, (Trump Jr.) did still promote it on social media. And you would think that you would look into companies before promoting products or being involved with them if you’re on the high level of being Donald Trump’s son,” Nelson said.

Political science professor Farida Jalalzai has studied the influence of political families around the world. She said that even though Trump Jr. doesn’t work for the U.S. government, the son of a president should be careful about whom he associates with.

“Why can’t you just Google people? Why can’t you just do the background information, right?” said Jalalzai, a Virginia Tech University associate dean. “That just seems like it’s low hanging fruit to be able to have somebody, maybe on your staff, that can just do some research into the backgrounds of people that you’re going to be meeting with and then have a discussion about whether or not it’s ethical.”

Jalazai said members of a political family have the power to bestow people and companies with influence.

“Even in an unofficial capacity, you would want to be careful about what messages you’re sending,” Jalalzai said.

To Mary Nelson, Trump Jr.’s seeming promotion of Young’s business sends a daunting new message as she fights to expose The Order.

“It’s hard to have to think about not only going up against the Kingston Group, but also people that are so much higher than you would ever think to be involved,” she said.