When the Australian Ballet’s Rina Nemoto found herself dancing with artistic director and international superstar David Hallberg in the rehearsal room, her muscles tightened up and her nerves shrilled with tension. 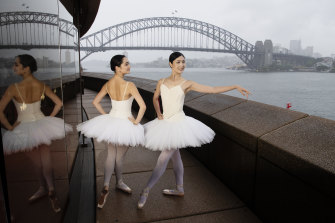 She wanted to show him how good she could be, all the talent and experience she has gathered since she began dancing age three in Tokyo, that she took to her teenage training in Paris, that won her a Prix de Lausanne scholarship to The Royal Ballet in London, that she developed since joining the Ballet in 2011 and becoming a soloist in 2018.

And she did. And the nerves melted away, and she found her way into the dance with him.

This discovery – and a lot of hard work – helped the 30-year-old win the coveted Telstra Ballet Dancer rising star award, announced in Sydney on Tuesday night. The panel of judges gave her the $25,000 prize because, says Hallberg, she had grown as an artist in the last year, “showing that the combination of individuality and hard work truly do pay off”.

A lot of that work was done under lockdown. It was a hard time but also a gift, says Nemoto.

“I was so worried mentally, but physically I’ve never stopped,” she says.

She went back to the basics: exercises, focusing on little muscles in her limbs and around the joints, repeating and refining fundamental movements and positions.

“And now I feel stronger,” she says. “I feel more free when I’m dancing. I didn’t expect that. Now if I want more and more, my body just responds, and I feel like I’m growing, which is amazing.”

She also grew closer to the company: a friendly, warm group “who now I can call my second family”.

The other award of the night, the people’s choice, went to corps de ballet dancer Lilly Maskery.

The 21-year-old from New Zealand, who joined the company in 2020, likewise credits Hallberg for inspiration: “the intensity that he works at is something that I had never experienced before,” she says. 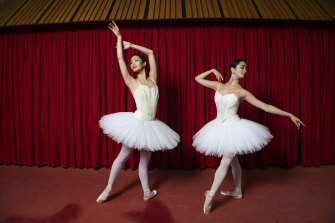 Nemoto and Maskery in the Sydney Opera House.Credit:Louise Kennerley

“It really taught me so much about the type of drive and work ethic that you need to be able to excel like he does. But I also love that he pushes balance: he says you need to be a person outside dance as well as in dance, so go out, have fun, don’t lose out on life.”

Her career highlight to date was her first performance with the company: the Kingdom of the Shades scene in last year’s Summertime Gala in Melbourne, in which 24 ballerinas in white tutus process onto the stage in unison.

“It felt like all those years of training had accumulated into this one moment,” she says. “A classic role, next to all these strong women. It was insane, so hard, so rewarding.”

She was always “the kid that would dress up and make everyone come and watch me”. Having ballet back in front of audiences makes her come alive, she says.

“An audience can take you further away from reality than when you’re in a studio with a mirror, looking at yourself in a leotard. As dancers you internalise so much, in the rehearsal room you can get so down or so analytical or so nitpicky.

“With an audience my favourite thing is to let go, and go for it.”