Tim Wilson is in his Brighton East office talking politics, policy and MP and philosopher Edmund Burke who, in 1774, famously told his Bristol constituents he was not in parliament to represent their local “prejudices”.

“When you go to Canberra you don’t vote parochially,” says Wilson. “You vote for what’s in the national interest”. 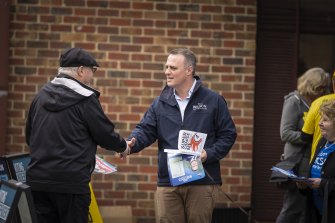 Tim Wilson at a pre polling booth in Brighton on WednesdayCredit:Eamon Gallagher

What he means is he has to consider outer-suburban and regional views on issues like climate change that are different to those in his own more progressive electorate of Goldstein. It’s a narrative consistent with Prime Minister’s Scott Morrison’s election pitch to voters beyond inner-city Melbourne and Sydney, even if it’s at the expense of Liberal heartland seats like Wilson’s, and Wilson himself. Morrison has not visited Goldstein during this campaign.

Wilson is in electoral trouble. Nonetheless, on key policy questions he is sticking with the party line and, he says, his own liberal principles.

Climate change is especially big in Goldstein and perhaps both a positive and negative for Wilson. He has a long-standing interest in the issue, reflected in his university studies of carbon accounting and science, and his appointment last year as assistant minister for emissions reduction.

But the Coalition’s tortured history on climate hangs like a dark cloud.

Even now, after signing the Glasgow Climate Pact, including net zero emissions by 2050, Australia is under international pressure over its refusal to review its Abbott-era 2030 emission reduction target of 26 to 28 per cent. Research group Climate Analytics has found this target, if other countries acted in an equivalent manner, was consistent with temperature rises of 3 to 4 degrees and catastrophic damage across the planet.

Wilson dismisses the 2030 target as “yesterday’s conversation” and champions emissions reduction through businesses and households voluntarily embracing cleaner technology, and through government investment. “What matters is not whether countries hit their targets but actually whether they’re putting in place their mechanisms to actually drive decarbonisation.”

Wilson also has a vexed history in the climate area, especially through his work with the free market think tank, Institute of Public Affairs (IPA) between 2006 and 2013.

He remains a member of the IPA, which opposes even the 2050 net zero target, wants the ABC privatised and describes the Coalition-endorsed new education curriculum as “infused with a pagan-green ideology”. 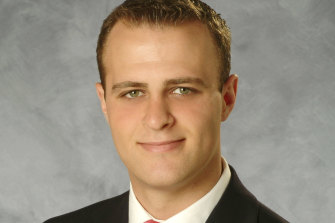 Was Wilson a climate sceptic in the IPA years or since? He says he has always had an “open mind” about climate science. “Like everybody I’ve been on a journey with this. I’m not trying to pretend otherwise.”

Early in that journey in 2006 and ahead of the 2007 election Wilson wrote in The Age that climate change was resonating as an issue “regardless of the science”.

Then in a glowing 2012 review, Wilson described how a book by climate denialist Professor Ian Plimer, had brought the “known unknowns around climate science back to the fore, critiquing the discredited Intergovernmental Panel on Climate Change”.

While at the IPA, Wilson argued against Australia being a party to the Kyoto Protocol, and described Rudd-era emissions trading and Tony Abbott’s Direct Action policy as “different sides of the same regulatory coin” and both “undesirable solutions”. 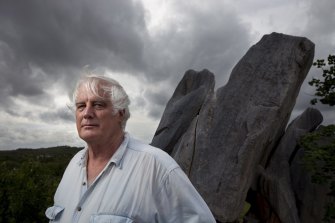 Political commentators often describe Wilson as a “moderate” Liberal, but Wilson does not describe himself as such. At the 2019 election, Wilson’s campaign material spruiked him as a “modern” Liberal but he doesn’t accept that brand now either. He says he prefers just “liberal”, adding that the “true” Liberal vision is: “democratisation of power, economic power through free market price signals, private ownership, private property, home ownership”.

It’s a philosophy that also underpins his policy calls including for Australians being allowed to access their superannuation for a deposit on a home, an idea slammed by former prime minister Malcolm Turnbull as “the craziest” he’d ever heard because of the likely hike in house prices, but which Morrison effectively announced as Liberal policy in his official campaign launch on Sunday.

Wilson, who is gay, is renowned as a free speech libertarian who won acclaim from the Australian Christian Lobby (ACL) for defending the rights of religious groups to discriminate against LGBTQ people, and famously argued for repeal of Section 18C [racial vilification] of the Racial Discrimination Act.

In a fourth term Coalition government, Wilson wants to be the minister, not just assistant minister, for emissions reduction. But he has to be elected first, and his party’s policies on issues like integrity are not helping his case in Goldstein.

Morrison has walked away from his promise of a federal integrity commission, saying he will only proceed if Labor fully backs his model – a model slammed by one senior legal expert as “useless and contemptible”.

Wilson supports the Coalition’s integrity model – which includes no public hearings for investigations into politicians and no ability for the commission to launch its own inquiries.

Does he support Morrison’s view that it would only take Labor’s approval for the commission to be enacted? “Absolutely,” he says. “I don’t believe in establishing an institution that doesn’t have bipartisan support, especially one as important as an integrity commission.”

In bayside suburbs like Brighton where more than 43 per cent of residents have bachelor degrees or higher, the ABC is a sensitive issue.

Wilson doesn’t respond directly when asked his personal view of its privatisation. “The ABC should be reformed to ensure it commissions content that reflects the true diversity of our nation, not just the inner west of Sydney,” he says. Is that yes or no? “I want to reform the ABC to address its geographical bias,” he responds.

“Ultimately, I have to accept that I may not be what people want. But I’d rather frankly go down and stand by the nation than the alternative.”