One of the production companies behind the Oscar-nominated film Lion has acquired the rights to turn Australian comedian Matt Okine's debut novel into a movie.

Sydney-based Aquarius Films will bring Okine's book about grief and growing up to the big screen, in partnership with Jude Troy's production company Wooden Horse. Being Black 'N Chicken, & Chips, published in September, is based on Okine's experience coming to grips with his mother's death and being a teenager trying to fit in while his life was falling apart. 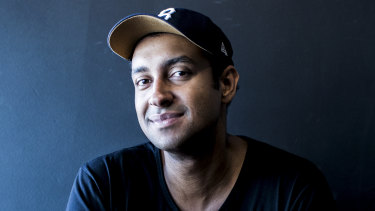 Aquarius Films' principal producers Angie Fielder and Polly Staniford said they are "big fans" of Okine's work, which includes playing a lead role in Stan comedy series The Other Guy. (Stan is owned by Nine, the publisher of this website.) About his novel, Fielder said, "It's a really moving but also hilariously funny experience of being a teenager but also dealing with his mother dying."

"It's got all the great makings of a family film – a coming-of-age, rite-of-passage story that will appeal to teenagers and also parents."

Okine said the film announcement was a "dream come true".

"It's something I've always wanted to do. From the second I started writing the book, I was writing the movie. I always had that in mind every step of the way."

As an executive producer on the film, Okine will have some control over how the story is portrayed on screen."I'm not arrogant enough to believe I'm the only person who can tell this story well. While there's always the chance there can be too many chefs in the kitchen, most good kitchens need a lot of chefs," he said.

Fielder and Staniford aim to begin filming next year and Okine is hopeful the story can be shot in Brisbane where he grew up.

"This is an iconic Brisbane story – it tells the story of Brisbane at a certain time from a certain set of eyes," he said. "It's an acutely multicultural story without … having it shoved down your throat."

The film suits Fielder and Staniford's desire for diverse films, with the producers keen to highlight stories and talent that may have been ignored in decades past.

"We all know we live in a world that discriminates casually every day. The point of this diversity is saying the talent is there, you just have to open your eyes," Staniford said.

Okine is excited about finding a "half-Ghanaian kid" to play his character. "When I was 12 years old I didn't see anyone like me being the lead character in an Australian feature film."

He also believes his mother would have been "really proud" of the book that she inspired.