Kate Middleton and Justin Trudeau showed international relations between the UK and Canada are still on very cordial terms, as the pair appeared to enjoy an animated chat during last night’s lavish NATO reception at Buckingham Palace.

In one of a series of photographs posted on the Kensington Royal Instagram account, the Duchess, 37, and Canadian Prime Minister Trudeau, 47, appeared deep in conversation at the glitzy reception, which saw royals and world leaders mingling in the London palace.

The Duchess and the Canadian PM first struck up a strong friendship in 2016 during a Canadian royal tour when she travelled with Prince William to Vancouver, spending time with Mr Trudeau and his wife Sophie. 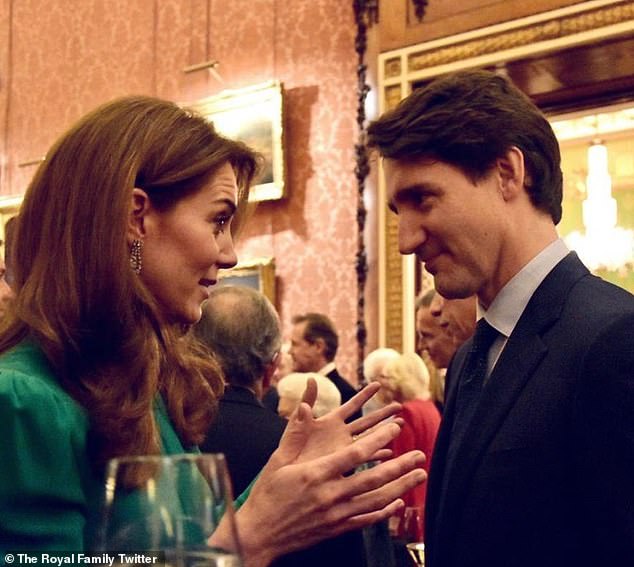 Transatlantic pals: Kate Middleton gesticulates with her hands as she appears deep in chat with Canada’s Prime Minister Justin Trudeau at the NATO reception at Buckingham Palace last night 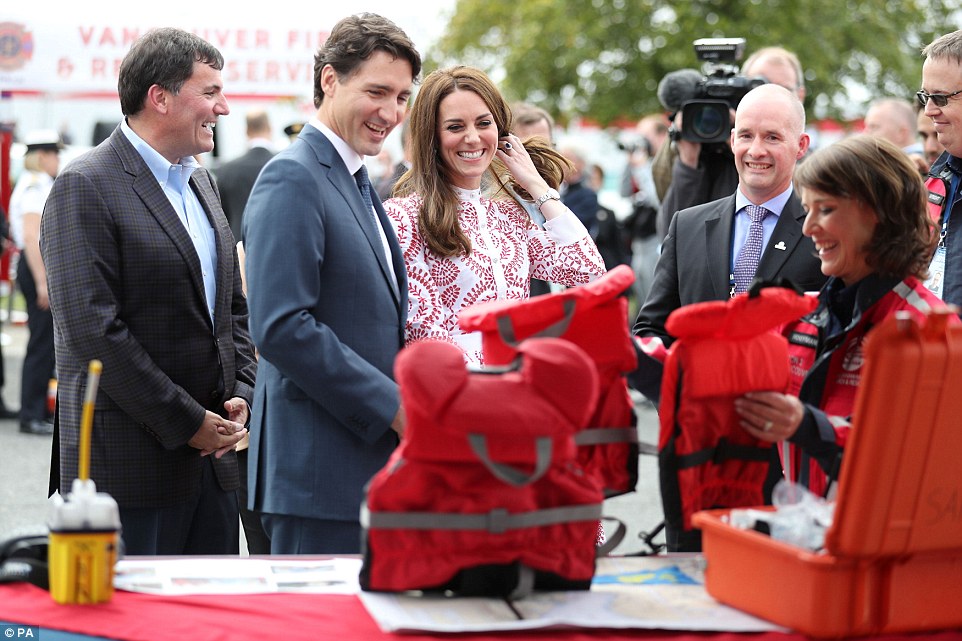 The pair’s friendship first flourished when Kate and William spent time with Trudeau and his wife Sophie during a royal visit to Vancouver in 2016 (Pictured: The Duchess in 2016 being is presented with personalised jackets for Prince George and Princess Charlotte at the Kitsilano Coast Guard Station)

Appearing on sparkling form last night, the Duchess of Cambridge chatted to many guests during the reception, which saw some 25 NATO leaders in attendance.

During her conversation with Mr Trudeau, Kate is seen using her hands to help emphasise a point, looking animated as the pair are deep in discussion.

The Cambridges first officially enjoyed the company of the Canadian PM and his wife Sophie during their tour of Vancouver three years ago – and the bond between the couples is obviously still thriving. 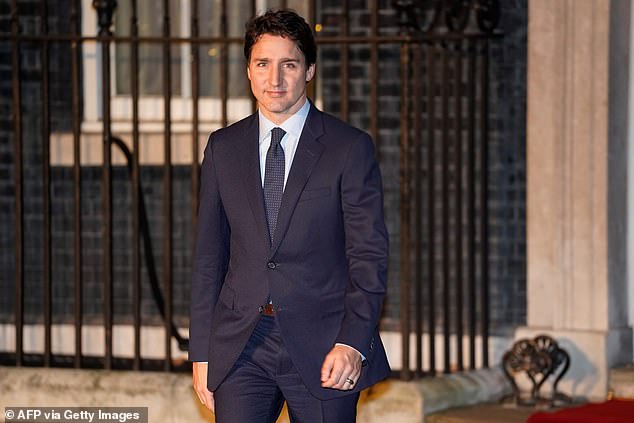 Mr Trudeau, seen leaving Downing Street last night, is one of 25 NATO leaders currently in the UK for a summit marking the alliance’s 70th anniversary 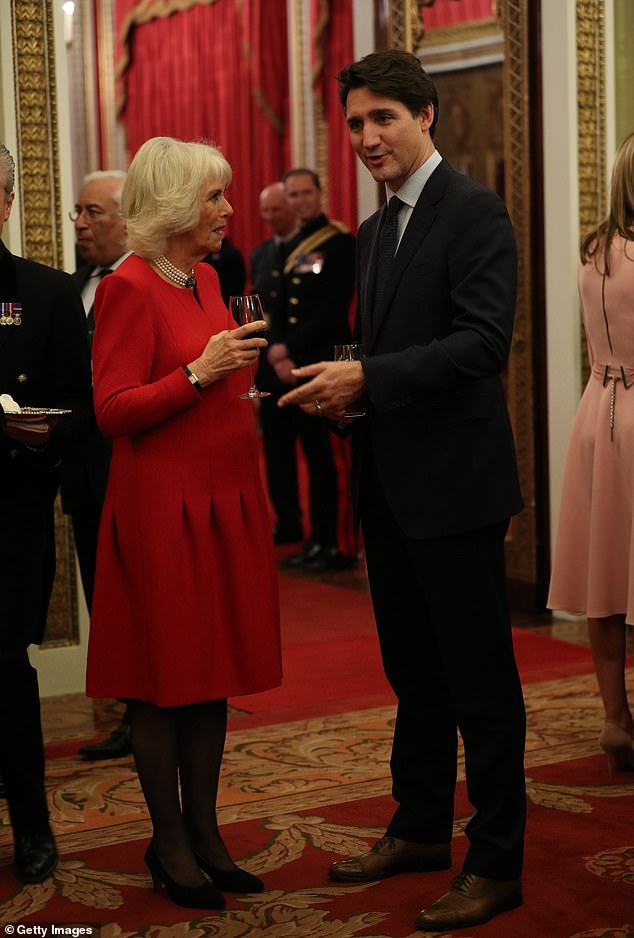 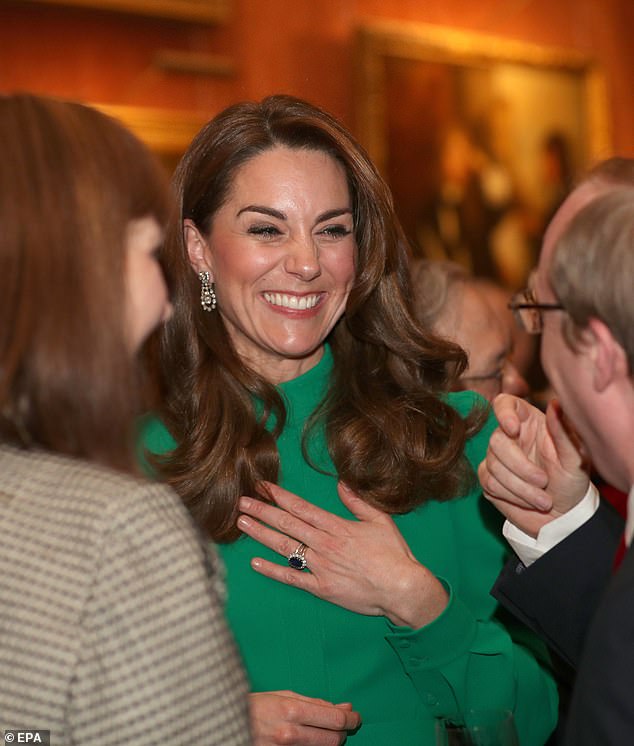 On sparkling form: The Duchess of Cambridge, 37, borrowed a pair of the Queen’s glittering diamond earrings for the NATO reception at Buckingham Palace last night 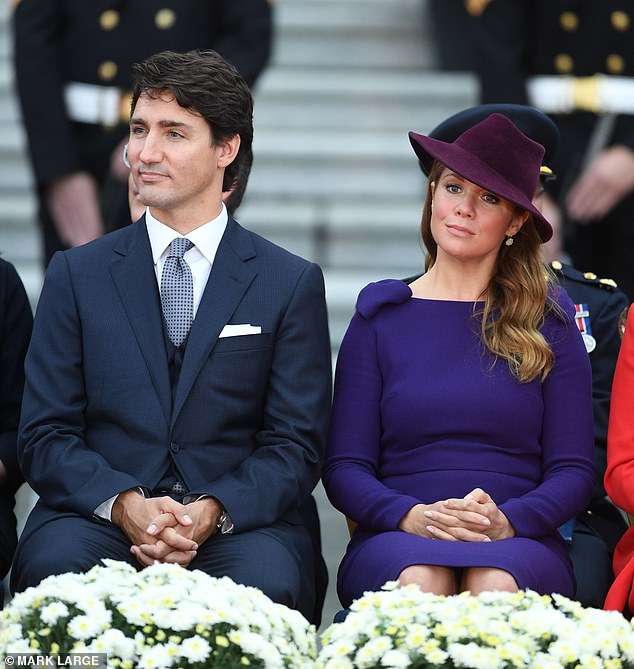 Mr Trudeau is in London for the NATO summit without his wife Sophie Gregoire, right (Pictured in September 2016 in Victoria, Canada) 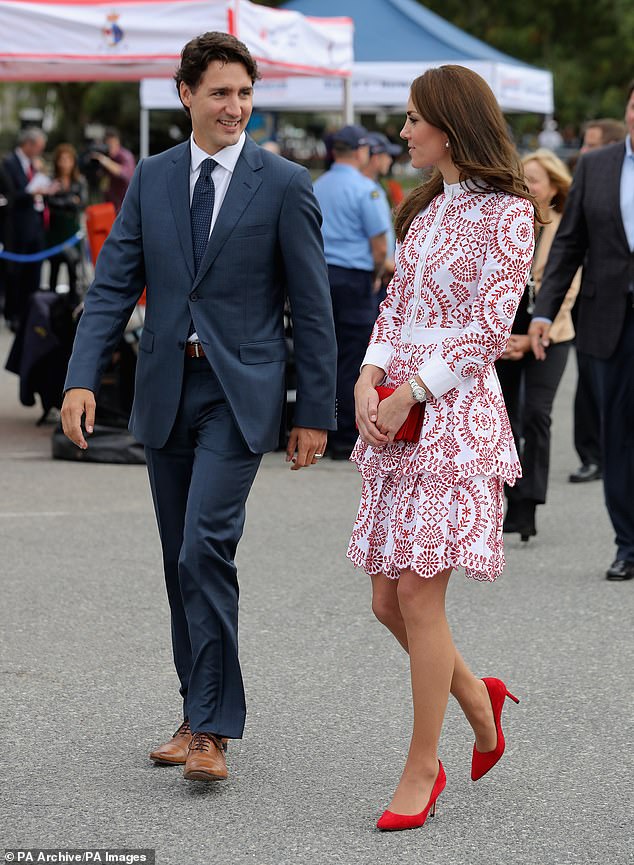 The Canadian PM and the Duchess stroll side-by-side during the Cambridges’ royal tour, one of their first as a married couple, in September 2016

Looking elegant in emerald, Kate borrowed a pair of the Queen’s glittering teardrop earrings for the NATO reception at Buckingham Palace last night.

The Duchess wore a green £1,000 Emilia Wickstead dress and accessorised with the dangling diamond jewels for the occasion.

The Queen, 93, was first seen wearing the stunning earrings at the State Opening of Parliament in 2012, but they have been seen gracing Kate’s ears on several occasions since, most notably at a gala held at Kensington Palace in November 2017.

The monarch lends pieces from her personal collection to members of the royal family for formal occasions and state visits, at her own discretion.