Not long before her 13th birthday, Giovanna overhears her father speaking about her to her mother. He's using dialect. "She's getting the face of Vittoria." These are his exact words but Giovanna translates them as: "my father said to my mother that I was very ugly." This is the second part of the opening sentence to Elena Ferrante's new novel.

The first part, "Two years before my father left home", is absorbed into the theatre of the second but it is just as electrifying. Both statements are critical to The Lying Life of Adults. 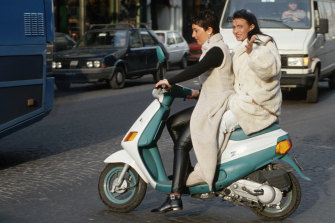 Elena Ferrante’s latest novel, set in Naples in the `90s, is again about what it is to be female in a world structured by males, and the possibilities of female friendship. Credit:Getty

The novel might equally be called The Lying Life of Adolescents. The narrator, Giovanna, becomes an imaginative liar as she discovers that words beginning as lies can become truths. That first lunge of hers, telling us that her father said she was "ugly" is, on the face of it, a complex lie.

All her life Giovanna has heard Andrea, her father, speak of his sister, Vittoria, as a woman "in whom ugliness and spite were combined to perfection". Andrea is refined and beautiful. And until those overheard words Giovanna believes that her father thought that she, too, was beautiful in every detail. The opposite to his sister in every detail. 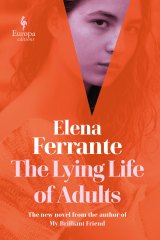 The intelligent girl emerging from a blissful childhood of being loved, and loving in return, is engulfed by another emotion. Anxiety. She insists that she meet the ugly aunt. But here's the lie of it. Tall, with a mass of black hair, slender as a reed but with a notable bosom, "Vittoria seemed to me to have a beauty so unbearable that to consider her ugly became a necessity".

Vittoria violates Giovanna's orderly life in the Naples of the '90s. She has no education, she works as a maid, her manner is harsh and her speech is a mix of Italian and the dialect that is banned in her brother's household. Everything Andrea has spent his life leaving is manifest in his sister. Giovanna loves her father's nuanced refinement but Vittoria is a physical statement of some other, unbreakable, unspeakable truth.

After driving his daughter through streets where the garbage isn't collected Andrea stops in front of a grim building and refuses to get out of the car. These streets, this building were his childhood home. By immense force of will he left. The leather soles of his nice shoes won't touch this pavement. But when he picks his daughter up, his question is: "Did she ask about me?"

Giovanna has no idea what is happening to her. All she knows is that the ease of childhood is falling away and anxiety colours everything. She asks her intimate friends, the sisters Angela and Ida, if she is getting ugly. They reply that they still see her as "pretty", adding: "you look a little bit ugly because you're anxious."

Readers of Ferrante's magnificent suite of novels following Lenu and Lila, two girls from mid-20th century Naples, beginning with My Brilliant Friend and finishing with The Lost Child, will be in familiar territory: the nag of class, the transformation wrought through education, the pleasures of money, the grind of poverty, violence, sex, beauty and ugliness and the way both are gendered.

This is the painstaking gesso for two of Ferrante's central obsessions: what it is to be female in a world structured by males, and the possibilities of female friendship.

Ferrante acknowledges the atomic power of sexuality, but she sees it not as a focus for our entire lives – the once classical male view – but as something understood within the frame of an entire life. Sexuality needs to be addressed before her characters can begin to see the magnitude, or often enough the tragic narrowness, of their lives.

Lila, in the Neopolitan novels, grasps this and lives her life accordingly. The life-giving, expansive virtues of affection and friendship interest Ferrante more than sexuality. This alone distances her from many contemporary mainstream masculine novelists. And aligns her with Hilary Mantel and Elizabeth Gilbert.

Giovanna is an only child and precocious. Both her parents value culture and education. The novel covers her life between 13 and 16, uneasy territory for writers because adolescent life is not that fascinating to anyone but adolescents. An entrancing child metamorphosing into alien being is more irritating than interesting.

Ferrante acknowledges the atomic power of sexuality, but she sees it not as a focus for our entire lives.

Giovanna has been complacent about her charmed life, but adolescence winds her. The former clever girl is failing and no one, including Giovanna, has any idea why. This is what her parents are discussing when Giovanna overhears those words in dialect. A subject too raw for the speech of classical Italian. What does it say about the parents' struggle if the curated child, the symbol of so many riches, can fall back into the horrible past?

Giovanna is the girl in the glass casket just beginning to stir. She doesn't need her lips to be brushed by the prince to wake from the sleep of childhood, she can use her own senses. She starts noticing – her mother's foot entwined with a man's under a table, the eagerness in her father's voice when he speaks of his sister, the feelings of her body when she shares a bed with Angela.

Ferrante rearranges chemicals in the air we breathe. Giovanna experiences – in church – the classical coup de foudre, that unbridled romantic/erotic blow to the heart. The object of the coup, Roberto, is a beautiful man embodying every promise of love and desire, reminiscent of the young Nino in My Brilliant Friend, impossible not to fall in love with if you are a romantic girl. Giovanna's pursuit of Roberto, a man who is engaged to her friend, is a tale of re-making how to be in the world beyond Romantic Love. Her education, of the head and the heart informs her.

The three years Giovanna narrates cover those between the oblivion of a happy childhood and the exhilaration of real life. But it's a nervy exhilaration, a gorgeous terrain paved with tiny explosives because we are all hostages to intimate histories pre-ordained by invisible rules. But Ferrante can imagine change.

A well-loved and perceptive adolescent Giovanna has the confidence to unmake some of those rules arranged over the centuries. She can make use of the classical language and incorporate the dialect in a new way because she brings imagination to her education.

The final line of the novel, sails through space humming with the high voltage of the opening line: "we promised each other to become adults as no one ever had before." Brava, Giovanna, Brava.