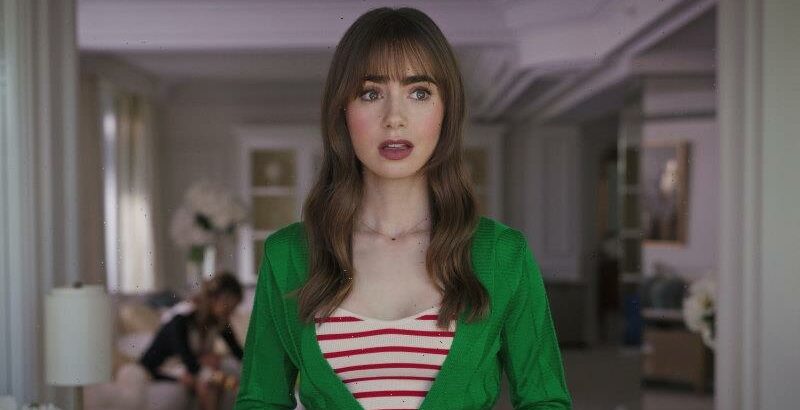 In its third season, Emily In Paris is the most popular show on Netflix in Australia and the second-most popular in the world. If you are yet to be seduced by its faux-Gallic charms, be warned. It is cliched, silly, predictable – and an awful lot of fun.

Emily (Lily Collins) is a fish-out-of-water rom-com about a junior marketing executive who moves from Chicago to Paris, doesn’t speak French, lectures the locals about how to be better at their jobs (ie, more American) and spends the budget of a small country on clothes each episode. It’s ridiculous, occasionally hilarious, and it’s downright educational. 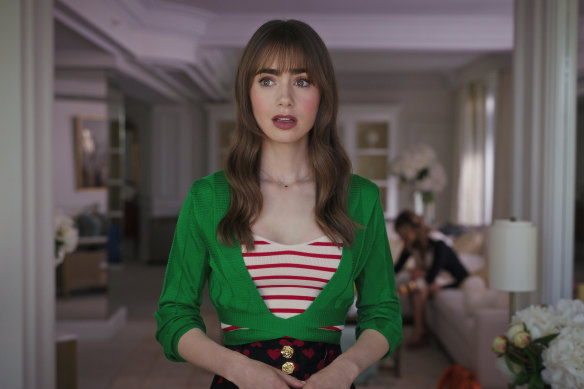 Lily Collins as Emily in season 3 of Emily in Paris.Credit:Netflix

The show has taught me everything I know about French people, some of which may even be true. It’s also taught me a lot about American exceptionalism, most of which is undoubtedly false.

Here, then, are some of the life lessons I have gleaned from Emily in Paris. May they come in handy as you, too, seek to derive wisdom from the show – or at least to pretend you’re not just frittering away your valuable time on a guilty pleasure with all the substance of a glass of bubbly.

Language is no barrier
To the truly gifted individual, not speaking the local language is no impediment to making a go of life in a foreign country. Emily waltzes into a marketing agency whose clients are all French, yet miraculously everyone speaks impeccable English and is willing to accommodate the fact she speaks not a word of their native tongue. Clients included. On the rare occasion that doesn’t work, there’s always Google Translate. But that doesn’t mean there’s no place for language classes: they’re a great place to pull. No sooner has Emily begun to brush up on her French than she starts smooshing up against English banker Alfie (Lucien Laviscount). If that’s not an inducement to hit the books, what is? 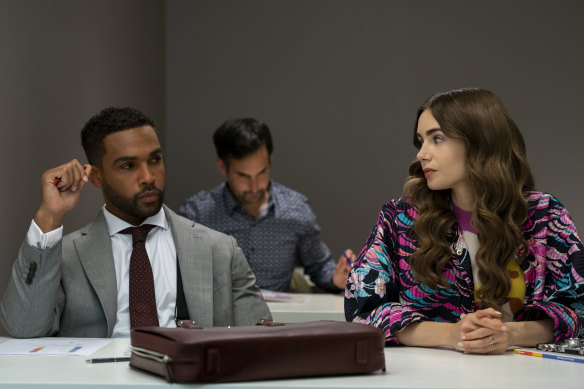 What’s it all about?: Alfie (Lucien Laviscount) and Emily start dating after meeting in a French language classCredit:Netflix

You are the brand
When Emily arrives in Paris in the first episode of season one, she has an Instagram account in her own name with just 48 followers. A quick rebrand to @emilyinparis and by the end of her first day she has 230. By season three she has more than 113,000. Given how much time the show spends trying to convince us that Emily is a social media savant, you’d think she’d be able to monetise the hell out of that. But by the end of her first day of “funemployment”, she’s so jack of it that she takes a job as a waiter instead. It’s hard work, this social media malarkey. Who knew? (Not Em, it seems.) 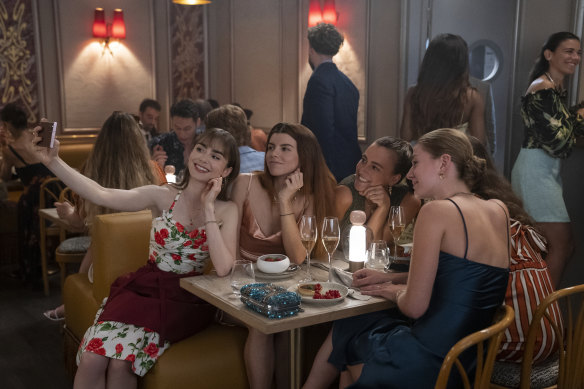 Call this funemployment? Emily finds social media is a bit like hard work when it becomes a full-time job. Credit:Netflix

You are what you wear
Perhaps the greatest life lesson EIP has to impart is that a day in which you don’t wear five different outfits is a day wasted. Apparently, no one simply goes out for dinner in Paris without first going home to slip into something more couture. Over the course of the three seasons Emily must have clocked up close to 150 different outfits, some of them drawing on fast-fashion chains such as Zara but many from high-end labels or runway designers; not a bad effort for someone on a junior marketing exec wage. The Instagram account @emilyinparisoutfits does a sterling job of tracking what they are and how much they cost. Whether you find Emily’s style tres amusant or simply ringarde (corny) no one could call it bland.

Marriage is sacred
Despite all the bed-hopping and the proliferation of extramarital liaisons, Emily In Paris is quaintly wedded to the idea that there is something special about the bond between a husband and a wife. It may well involve free licence to root around like a Parisian sewer rat, but marriage is sacred. It’s sweet, but if Sylvie (Philippine Leroy-Beaulieu) and her St Tropez-nightclub-owning beau Laurent (Arnaud Binard) settle into something like a traditional relationship it will feel a bit like a betrayal. 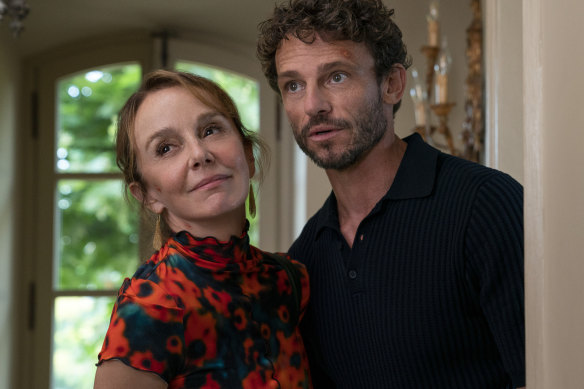 To work is to be … or not to be?
In the very first episode of the show, Emily and Luc (Bruno Gouery, one of Tanya’s “the gays” in The White Lotus) have an exchange that basically sums up the entire three seasons that follow. “I think the Americans have the wrong balance,” he tells the brightly coloured Duracell bunny who has stormed the office. “You live to work, we work to live.” It’s a cliché, but like all clichés, there’s something to it. Each can and does learn from the other, but it’s pretty hard not to side with the French on this one.

The rich suffer too
Well, the children of the exceptionally rich do, anyway. Witness poor Mindy (Ashley Park), estranged from her billionaire father because she embarrassed the family on national TV back in China. 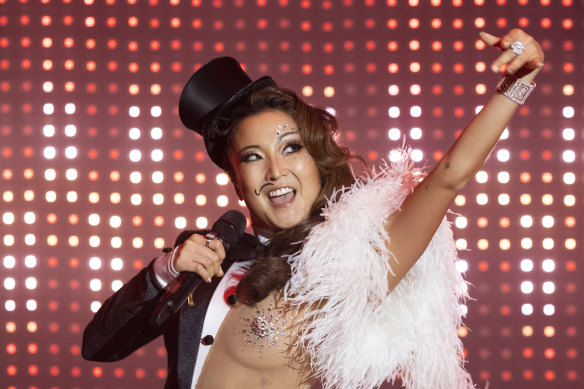 Take poor little Nicolas, her I-had-a-crush-on-you-back-in-Swiss-boarding-school boyfriend, the son of one of France’s wealthiest men but destined never to make him feel proud, even while running one of his luxury brands. Yes, people, they suffer just like the rest of us. They just do it in fabulous restaurants while wearing designer clothes, with endlessly flowing champagne on hand to dull the pain. Where’s my hanky?

Australians can’t be trusted
Look, we’re not quite as bad as the rostbif English, but Scott Morrison ripping up a $90 billion submarine contract while they were looking the other way seems to mean we’re a bit dans le nez right now. When Emily meets with stylemaker Janine Dubois (Kate Colbrook) to try to get Sylvie onto La Liste, a ranking of the hottest people in Paris, she ends up on it herself, along with he’s-just-a-friend hot chef Gabriel (Lucas Bravo). 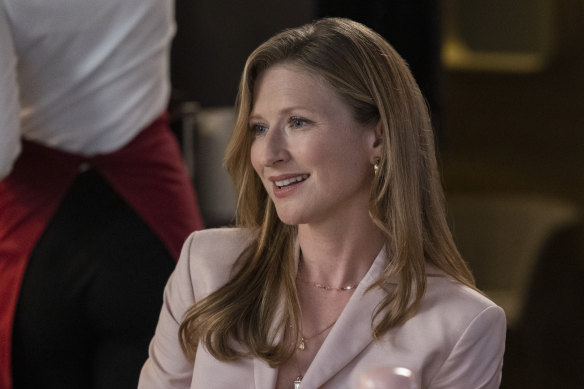 Janine, it turns out, is Australian – though the actress who plays her is English, and her accent sounds suspiciously South African – which makes Sylivie suspect un complot. “You’re American, she’s Australian,” she fumes. “You colluded!” Totally awks (or should that be AUKUS)?

The French love cinema
There’s a hilarious bit in season two riffing on Francois Truffaut’s 1962 movie Jules et Jim, about a menage a trois, which gives Luc the opportunity to regale Emily with how much Parisians love the cinema. 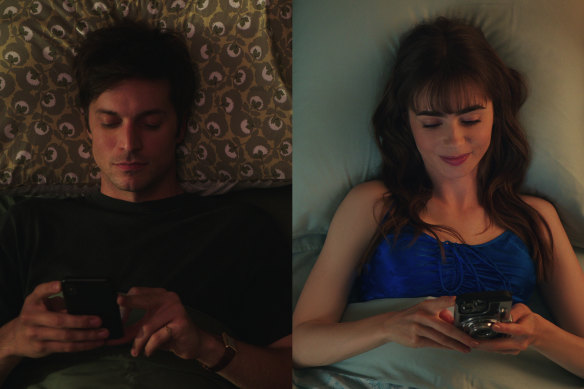 If you spend your nights texting your ex while lying in bed with your partner, it might be telling you something. Credit:Netflix

So, what do they all choose to see at an open-air screening in the park this season? A Matthew McConaughey-Kate Hudson rom-com, naturellement. “Everyone likes watching a story about two people trying to fight off their natural attraction to each other,” Gabriel says to Emily, thereby summarising the strange appeal of this delightfully ridiculous show for millions of people who really should know better.