Spoilers ahead for the Black Monday Season 1 premiere. Don Cheadle’s Maurice Monroe, aka Mo, on Black Monday has a masterful plan for nabbing the white whale of Wall Street. But as the very first scene shows, it’s going to end in death. Who dies at the beginning of Black Monday is also likely the person who causes the worst crash in Wall Street history — or, at the very least, a hint at who ends up losing the most. So early on in the show, anything is possible, but a few clues indicate the man could really only be one of two characters: Mo or Blaire.

For a 35-minute episode, "365" is riddled with references to traders committing suicide by jumping out a window when they lose money. The first one comes when Blaire (Andrew Rannells) runs into Mo on the trading floor (well, Mo really runs into Blaire) and Mo’s birthday gift of cocaine spills everywhere. Mo threatens anyone who hires Blaire that he’ll mess with any trade they make "until you die, which will be soon because you will jump out of a window because you’re bankrupt." Then, the Lehman Brothers — both played by Ken Marino — bring up suicide to intimidate Mo. "Where do all the rockstar traders go out after they trade with the Lehmans? A window," Larry cruelly quips to Lenny. 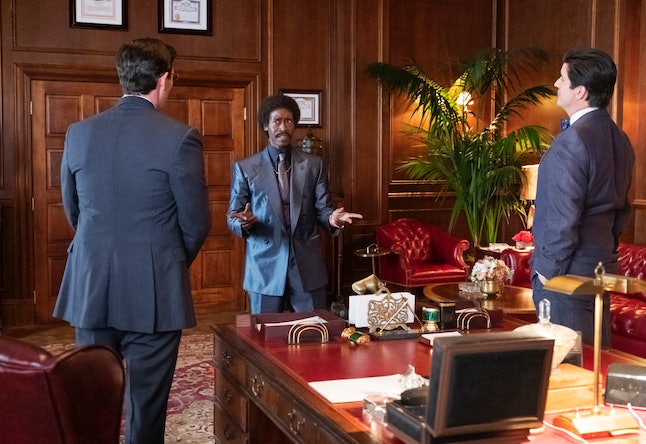 Mo or Blaire has to be the person who plummets into the "limbo" at the beginning of the series. Yes, it sounds like Blaire screaming and the earring his girlfriend (Casey Wilson) gave him as a tiepin is seen on the body, but it could just as well be Mo. After all, Mo tells Blaire at the end of the episode, "I’m coming for that dope-ass tiepin," and the dead man is wearing a Rolex just like Mo’s. Add that to the fact that the man falls onto Mo’s Lamborghini limo ("aka a Lambo limo, aka a limbo," Mo explains), and it seems like Cheadle’s character is doomed.

On the flip side, there’s still reason to believe its Rannells’ absurdly naive Blaire. Unbeknownst to him — and the audience, until the final moments of "365" — Mo has manipulated Blaire into working for him and even convinces him to propose to his girlfriend. Mo has a dream of owning the majority of Georgina’s Jeans, which just so happens to be the company that Blaire’s (now) fiancée’s family owns. So if Blaire ends up losing Tiff Georgina’s family fortune, which would also be his money since he’s marrying into the family, he could be compelled to commit suicide. And since Mo takes Blaire’s Honda, it seems only fitting that Blaire would crash into his beloved limbo. 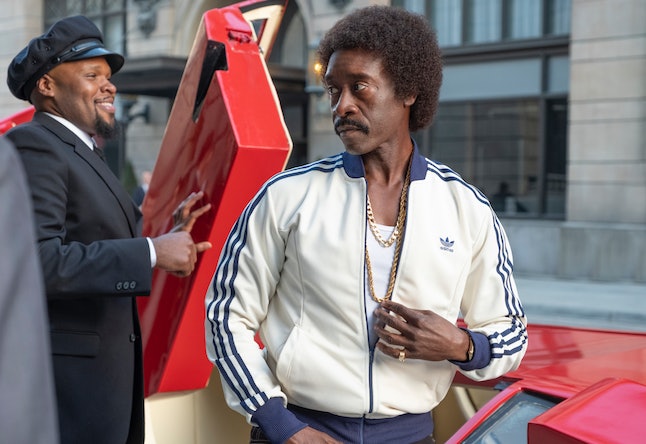 Regardless of whether it’s Blaire or Mo that winds up dead, it already seems like there is a twisted sense of poetic justice in this mystery character’s death. And even if one of their characters does survive Black Monday, they most likely won’t walk away a Wall Street winner.