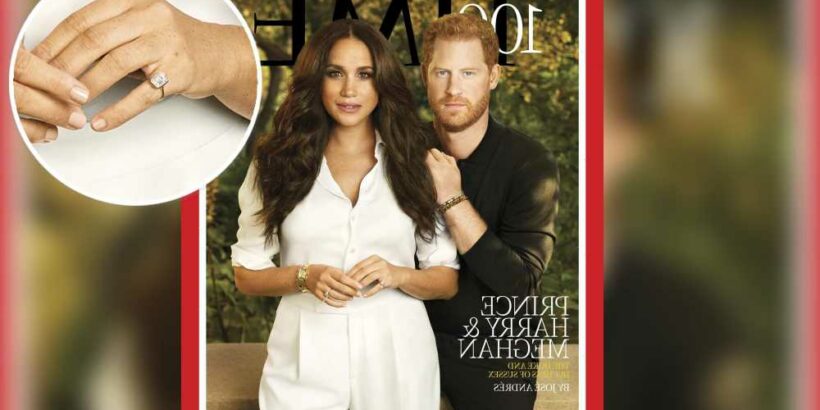 The Duchess of Sussex covers the new Time 100 issue alongside Prince Harry wearing multiple pieces of jewelry, including her own gold Cartier Tank watch and both a symbolic new Shiffon pinky ring and her engagement ring on her left hand.

On her right hand is another, larger diamond pinky ring; as Page Six Style revealed in October, celebrity jeweler Lorraine Schwartz fashioned the piece out of a gift of diamonds that the couple received from the Middle East.

Multiple sources have confirmed to us that the gift initially arrived for Harry, but that the Duke of Sussex then gave it to his wife, who turned to Schwartz to rework them.

Schwartz also turned the same set of diamonds into stunning convertible earrings with the same exquisite emerald cut, which Markle wore to the 2019 Trooping the Colour ceremony as simple studs.

One month later, the Duchess added black onyx backings for the London premiere of “The Lion King,” framing the stones and lending the pair a new look. 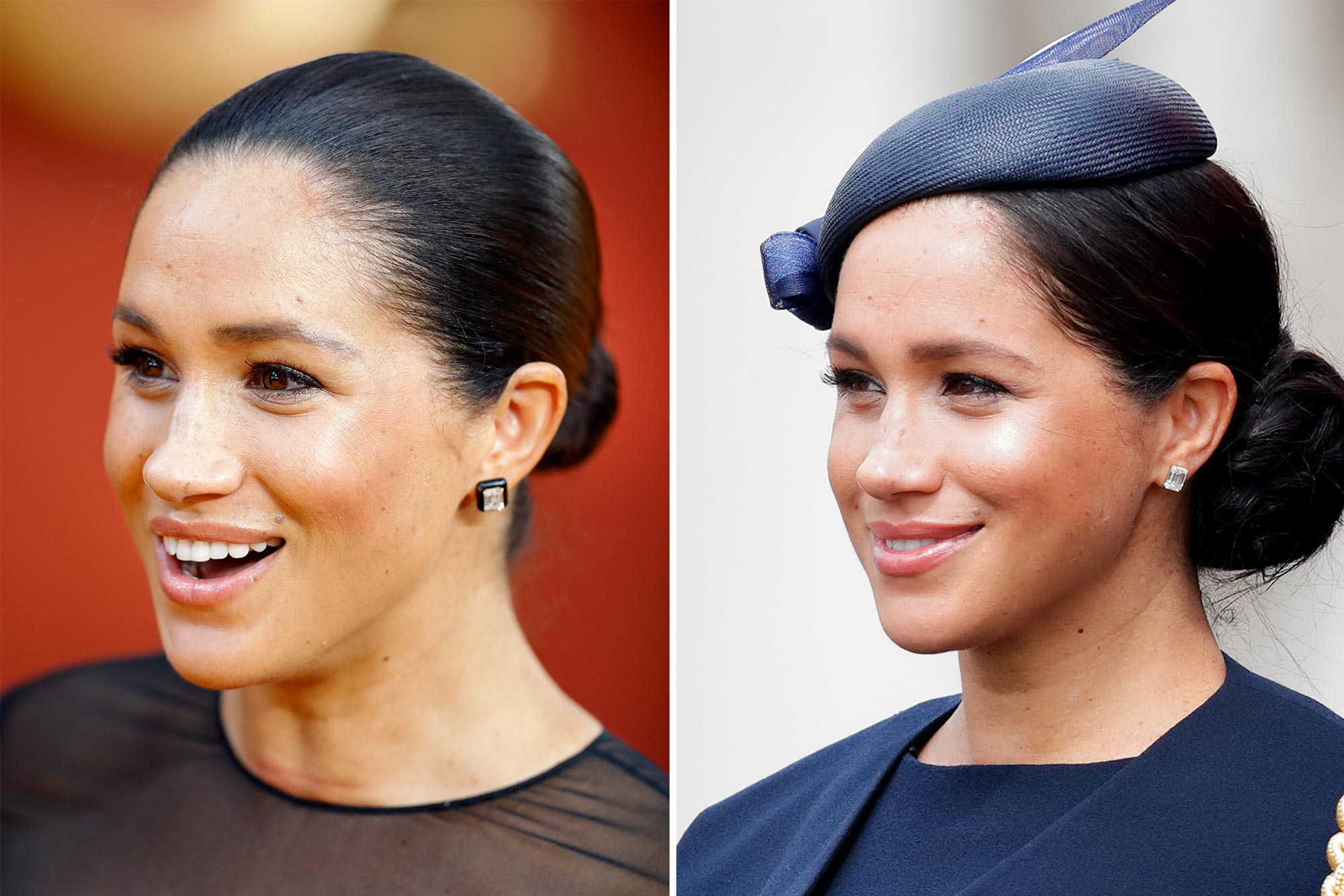 However, the exact provenance of the diamonds — and the identity of the person who gifted them — is unknown.

What is clear is that the couple were still working royals at the time, as they only announced they were stepping down from their senior roles in January 2020.

Although Buckingham Palace keeps an official list of gifts, only those received on overseas tours are made public.

Markle first debuted her Lorraine Schwartz pinky ring for another Time shoot in October, and also wore it for her 40th birthday video last month with Melissa McCarthy. It’s believed to be a particular favorite.

Schwartz also reworked Markle’s engagement ring and made her an eternity band in 2019. 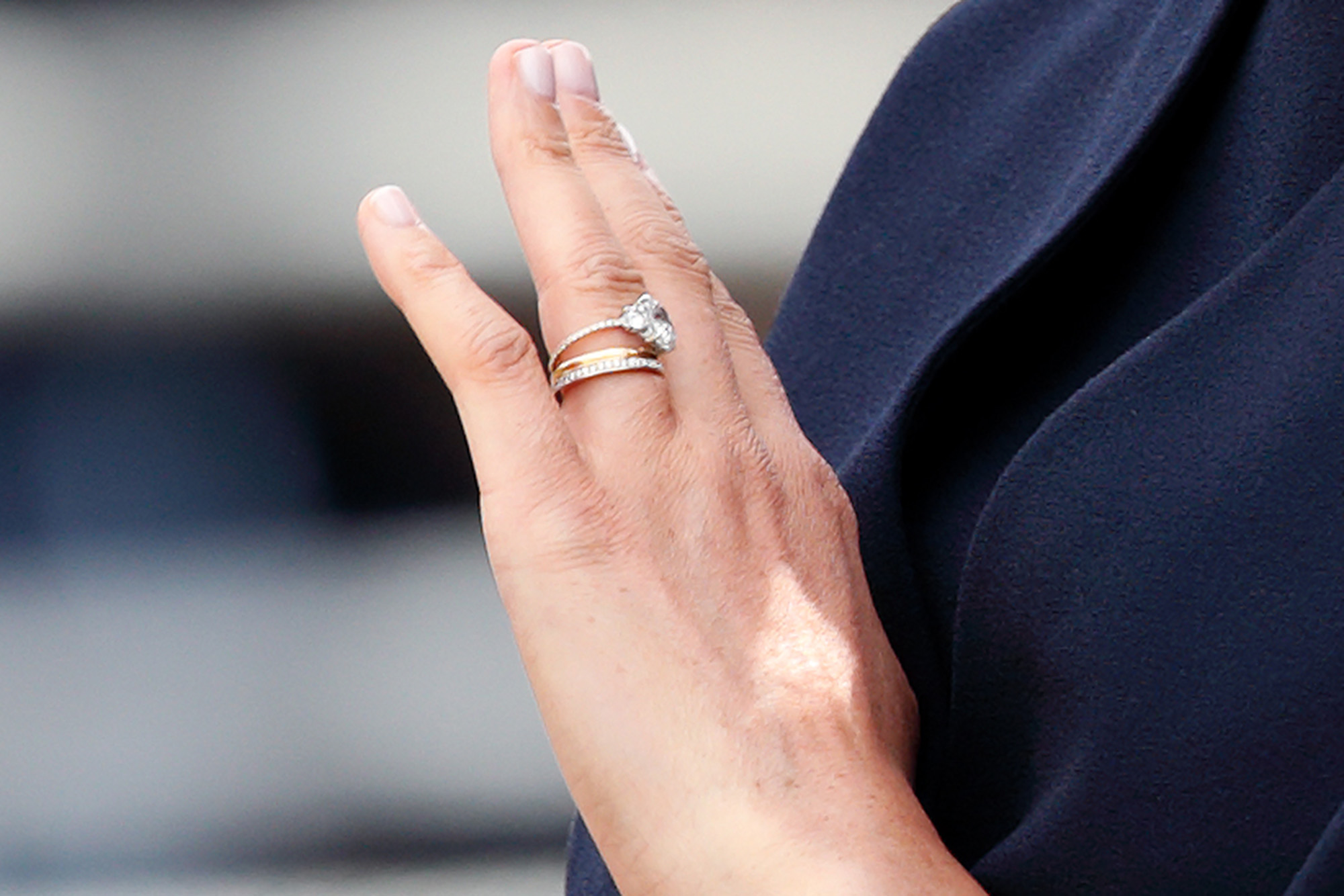 The mystery over the pinky ring comes after Markle was criticized earlier this year when it emerged she wore a pair of chandelier diamond earrings on her tour of Fiji in October 2018 that were a wedding gift from Saudi Crown Prince Mohammed bin Salman.

The crown prince, known as MBS, has been accused of ordering the murder of journalist Jamal Khashoggi.

Michael Eisner, who heads up a human rights group founded by Khashoggi three months before his death, said: “Those earrings were bought with blood money and given to her by a murderer … she has no business wearing them.”

The Chopard earrings were presented to the Queen by the Crown Prince as an official gift for Markle on her wedding day to Harry in 2018.

Markle’s lawyer has said that she had no knowledge at the time of the reports linking MBS to Khashoggi’s death.

The Crown Prince, who is Saudi Arabia’s Deputy Prime Minister and day-to-day ruler, has said he bears responsibility for the murder “because it happened under my watch,” but has denied prior knowledge of the execution.

The Dawn human rights group, run by Eisner and Hatice Cengiz, Khashoggi’s fiancée, last year filed a lawsuit against MBS and 20 alleged co-conspirators in a US court.