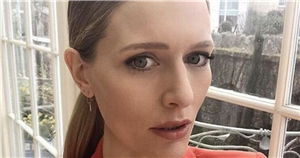 She is the Line of Duty star who was married to undercover cop John Corbett before he was brutally murdered by newly-recruited police officer Ryan Pilkington.

And Liverpool-born Steph Corbett, played by Amy De Bhrún, has returned for series six of the hit BBC series and has already made Detective Inspector Steve Arnott suspicious of where her income is coming from.

So what do we know about the actress when she is not on TV? Let’s take a look…

How old is she?

Where is she from?

The actress has a Liverpudlian accent in the BBC series but is in fact Irish.

Amy has 2,895 Instagram followers and regularly shares snaps of her family life in Ireland.

Amy is married to Sean Branigan.

Dublin-born Sean is a writer, director and illustrator. He is the owner and head storyboard artist at Storyboard Workshop Ltd. based in Ireland.

Does she have children?

The blonde beauty shared a series of snaps on Instagram following the birth captioned: “5TH JULY 2019. 12.37am. Our little girl, Billie Lena Branigan came into the world and stole our hearts.”

What else has she starred in?

Amy studied at Loreta High School in Beaufort, County Kerry, before she went onto gain a professional acting diploma at The Bridge Theatre Training Company in London from 2003 until 2005.

She starred in the 2016 thriller Jason Bourne alongside Matt Damon and TV series Vikings from 2013 until 2020.

Amy also landed a part on Casualty in 2013 as Alana Nicholson and starred as Adele McHoughton, organiser of a fashion shoot at Underworld, in Coronation Street in 2018.

Who does she play in Line of Duty?

Amy first appeared in the BBC series as Steph Corbett in series five where she was questioned by DI Kate Fleming and DS Steve Arnott over her husband’s undercover work.

John Corbett had his throat slit by Ryan Pilkington, now a police officer working on the murder of journalist Gail Vella, after it was revealed, he was leaking information to the police.

Liverpool-born Steph, who has two daughters with John, provided evidence that cleared Superintendent Hastings after he was framed by the organised crime group (OCG) as a corrupt officer.

Ted gave Steph £50,000 after the death of John, played by Steven Graham, which was the money that the OCG used to bribe him.