By George Palathingal and Cassie Tongue 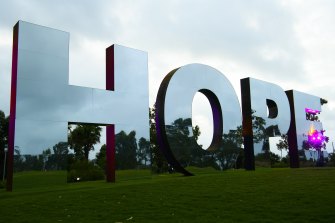 It wouldn’t be summer in Sydney without the Sydney Festival, featuring a diversity of cultural events throughout January. Here our critics review the first week of gigs, dance and theatre.

You could read plenty into the fact that within 10 minutes of this year’s controversial Sydney Festival, the opening act and its crowd were loudly chanting “Go f— yourself” – but that would be a tad disingenuous. 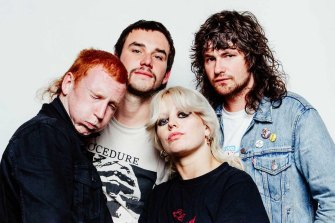 Amyl and the Sniffers, thrashing their way through the Australian pub/punk-rock scene. Credit:

Melbourne four-piece Amyl and the Sniffers have been snarling and thrashing their way through the Australian pub/punk-rock scene (and far beyond) with such attitude since 2016 and, frankly, you wouldn’t have it any other way. They yet again prove to be exhilarating and unmistakably special, even on an evening fraught with difficulties, technical and otherwise.

Aside from that latest irritant Omicron contributing to an early lack of atmosphere – this pop-up venue in front of St Mary’s Cathedral was only half full and sensibly seated at its 7pm start time – the sound was initially as thin as the audience, and the band had distributed the wrong set list among themselves. Later, lead singer Amy Taylor even has her mic give out on her.

But none of this was ever going to stop Taylor, the kind of woman you imagine could start the best party in the worst possible place. Taking charge at the initial confusion, she announces the band should start with Guided by Angels, the surly opener of current album Comfort to Me, and work things out from there. 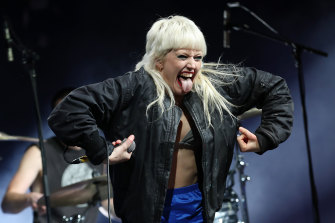 She’s quickly making friends in the front row during GFY (see the opening paragraph to see what that stands for) and sees the sense in taking a crowd request for the bass-led Got You while lead guitarist Dec Martens finds the correct setlist on his phone.

By the following Starfire 500, Taylor has everyone out of their seats, the sound has miraculously improved and the band have not only found their setlists, they’ve found their mojo – and they don’t look back.

Stoic bassist Gus Romer continues to hold things together on his end, Bryce Wilson powers through on drums and Martens thrills with a seemingly endless supply of hard riffs and ripping solos.

And while few would call Taylor a great singer, fewer still would deny her enormous charisma and charm (especially when she grins sweetly through Security as she barks its lyrics to the men in the hi-vis vests). Knifey, her ode to self-protection, powerfully finds the sweet spot between toughness and tenderness, too.

After an occasionally shambolic hour there’s no encore but that proves relatively easy to accept – the job of lighting a fire under the Sydney Festival has been emphatically accomplished.

Imagine if someone observed your dinner parties. Imagine someone, unswayed by the loose-boned warmth of generously poured drinks and drugs, recording everything.

Someone capturing you rolling your eyes at an inane comment or locking eyes for a beat too long with another guest. Someone noticing when you spill wine on your shirt. 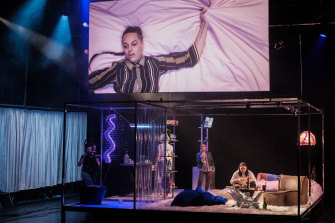 Imagine if the fantasy projection of yourself and your friends and partners collided with the ordinary, repeatedly, and made it extraordinary. Nat Randall and Anna Breckon’s Set Piece, with its watchful live camera feeds and finely constructed looping structure, does exactly that.

Directed by Breckon and staged at Carriageworks as part of Sydney Festival, it focuses on intergenerational lesbian relationships, connections and fissures. Its script and live-camera feed plays with performed and unconscious ritual informed by queer pop culture, filmic techniques and insights.

It also has uncomfortably keen observation skills: part of the script, by Breckon and Randall in collaboration with Andrew Brophy, was developed through improvisation and drawn from real-life parties. 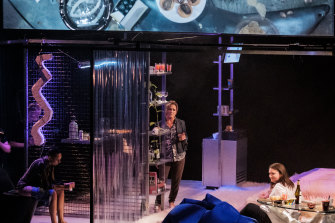 The four guests – played by Randall, Anni Finsterer, Dina Panozzo, and Carly Sheppard – roam through an apartment full of plush places to land. An older, more established couple plays knowing host to younger guests. There is seduction. There is conflict. There is ennui and Aldi cheese and “have you ever read any Anne Carson?” Sex is offered, dissected, discussed. The distance between longing and action is carefully recorded. It’s witty and vulnerable and ironic and bold.

Everything is so alive it tingles, and it is constructed with our viewership in mind – moments re-examined and re-lit, camera gaze sharing secrets and positioning us as conspirator or interloper from moment to moment.

Music matters here, and between composition (by Nina Buchanan) and painfully perfect chosen snippets, they provide the party’s pulse. When Love and Affection – a lesbian standard by Joan Armatrading – plays, everyone feels it in their bodies. It is glorious.

Set Piece is wonderfully and painfully intimate. It gets under your skin. Still, opening night was plagued with concerns: a technical glitch interrupted the live feed, attending events in the time of escalating COVID cases can be fraught with anxiety, and Randall and Breckon have publicly stated their concerns about Sydney Festival’s association with the Israeli Embassy. In the spirit of the work, it feels important to notice all these factors and feel their impact on our experience. We bring everything we feel to a party, after all.