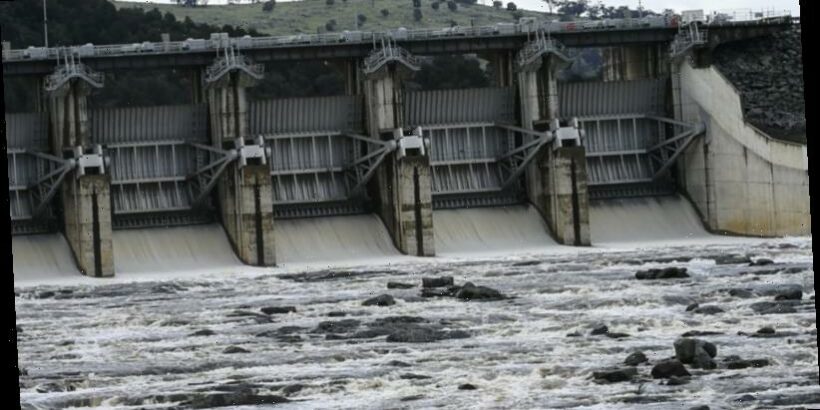 The cost of NSW's biggest dam project may blow out to $2.1 billion, or more than triple the original estimate, delivering what is likely to be the most expensive water in the Murray-Darling Basin.

Documents released to the Greens show the Berejiklian government now forecasts the cost of raising the Wyangala Dam wall by about 10 metres will be $1.2 billion to $2.1 billion even though it would only yield a moderate increase of water for general use each year. 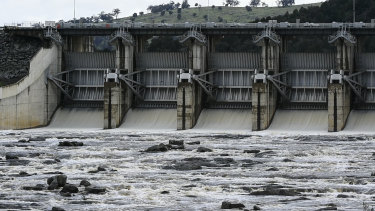 Water being released down the spillway at Wyangala Dam in 2016. The cost of expanding the reservoir by 21 gigalitres may end up being triple the original $650 million price tag.Credit:Wolter Peeters

One Planning Department document states that "funding [is] only secured for [a] $650 million project. Need to identify additional funding, either Snowy Hydro Legacy Fund or National Water Infrastructure Development Fund for additional costs".

Wyangala was the second major dam built for irrigation in the state, with work beginning in 1928. It captures water in the Lachlan River valley near the central-west NSW towns of Cowra and Forbes.

The controversial expansion plan was announced by the NSW Nationals in the run-up to the 2019 election, near the height of the recent drought.

While WaterNSW says the project would increase the dam's storage capacity by 53 per cent and provide "a significant improvement in drought resilience", its own initial modelling predicts general security license use will rise by 21.05 gigalitres a year, or only a few per cent more water.

Cate Faehrmann, the Greens spokeswoman for rivers and chair of NSW upper house inquiry into the new dams, said the project was a "very expensive brain fart by the Nationals at the last election" that did not stack up environmentally, socially or economically. 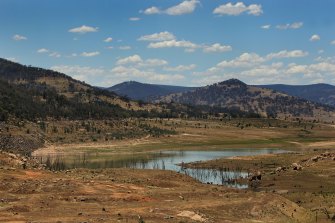 Wyangala Dam when it was 4.5 per cent full in late 2009.Credit:Kate Geraghty

“The Water Minister [Melinda Pavey] needs to explain why she is prepared to throw $2 billion of taxpayers money at an unviable mega-dam at the expense of many other water security measures for the region," Ms Faehrmann said.

“This project must be halted while all other options in the Lachlan Regional Water Strategy are considered," she said, adding the project had been rushed through even when the draft strategy for the Lachlan was still being finalised with 48 options for water management.

“Far more sensible and sustainable options including managed aquifer recharge, water recycling for towns and greater irrigation efficiency measures are all at risk if the Water Minister continues to pursue her pet project at the expense of all others," Ms Faehrmann said.

A spokeswoman for Ms Pavey declined to comment on the cost blow-out, saying "the most expensive drop of water is the one we don’t have".

"Cost estimates will be clear once the final business case and environmental and cultural assessments are completed this year," she said.

A spokesman for WaterNSW said the complex project was "in the early investigative and preliminary planning stages" even though the agency's answers to "frequently asked questions" states final reports were expected by September 2020.

"Cost estimates will only become clearer once the final business case and environmental and cultural assessments are completed later this year," he said. 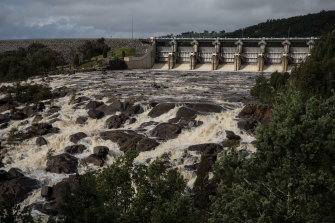 Raising the Wyangala Dam wall will result in a disruption of water supplies for several years – if construction of a higher wall goes ahead.Credit:Wolter Peeters

Maryanne Slattery, a former Murray-Darling Basin Authority official who is now a consultant, said the dam wall raising would lift the average amount of water a typical irrigator would receive from 56.2 per cent of their licence in any year to 59.7 per cent, over the long term.

Even at the initial cost estimate, the extra water was going to cost about $30 million per gigalitre, compared with current prices in the valley of about $1.19 million. The higher end of the estimates "knock it right out of the park at $100 million per gig", Ms Slattery said, making it the mostly costly water in the entire basin.

In her submission to the inquiry, Ms Slattery also cited the NSW government's own forecasts of the impacts of climate change that would more than wipe out the projected increase in supply.

For its part, the Morrison government won't say whether it will increase its contribution to the project.

"[We] will assess the merits of the business case once the NSW government have forwarded it for consideration," said a spokeswoman for Michael McCormack, the Deputy Prime Minister and Minister for Infrastructure.