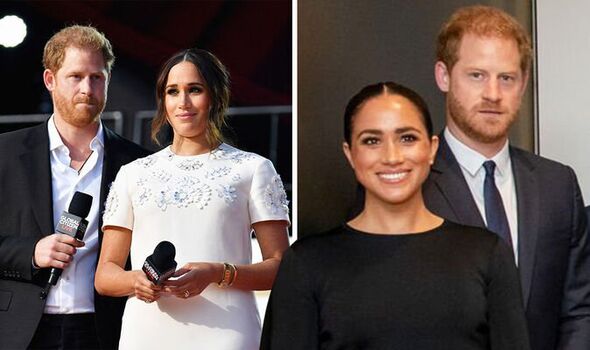 Meghan Markle appeared in New York City on Monday for Prince Harry to give a speech at the UN for Nelson Mandela International Day. Following his speech, the Duke of Sussex joined the other guest speakers for a photograph, in which the Duchess joined in and was seen standing in front of her husband. Jesús Enrique Rosas, aka The Body Language Guy on YouTube, analysed this particular photograph and others where Meghan has planted herself either in front of Harry, or closer to the camera.

In his latest YouTube video, Jesús said: “We have this photograph that was taken after the event. Tell me what can you see that you find off in this photograph?

“I can tell you a couple of things… for some reason, Meghan decided to stand in front of Harry here.

“You can see that she is almost covering Harry, and Harry, well, he was the speaker.

“Everyone else in the photo either spoke or was acting in an official UN capacity.

“Nobody else has their spouse,” the expert noticed. 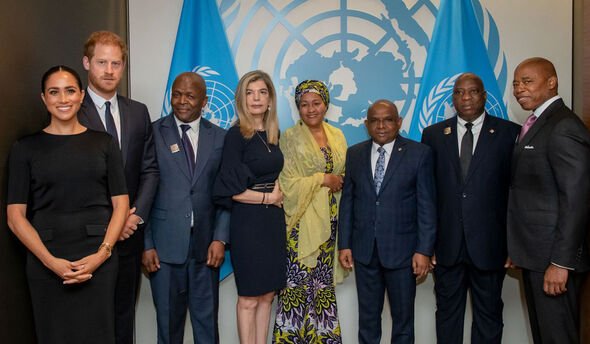 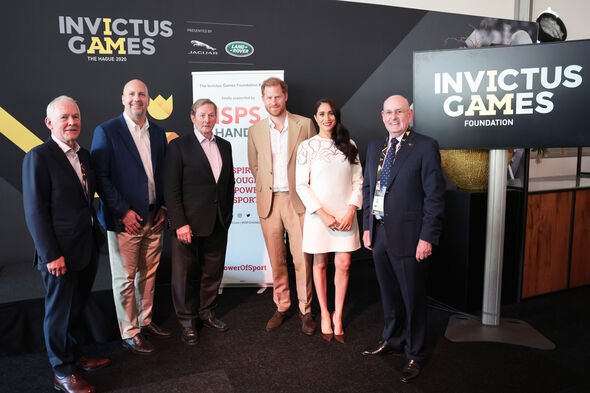 “She [Meghan] is positioned closer to the camera than anyone else – you can’t unsee it now.

“Meghan has this history, this track record of wanting to be in the spotlight,” Jesús claimed.

“Why would she want to cover him, stand in front of him? You’re going to tell me ‘Harry is taller, his head stands out’.

“You can see this photo from another angle, the space was really tiny and either way she didn’t say ‘the space is so tiny maybe it can be Harry on his own.’”

The expert discussed Prince Harry’s body language and suggested: “You can see that Harry’s body is a bit uncomfortable, he is tense.

“He is usually tense, and you saw him with that attitude sitting before the speech, and even the speech, his facial expressions.”

This isn’t the first time Meghan has stood slightly or directly in front of her husband when a photograph has been taken.

Day two of the Invictus Games, held at The Hague, Netherlands earlier this year, saw the Duke and Duchess stand alongside officials for a photograph.

This time, there looked to be plenty of space for everyone to stand shoulder to shoulder, but Meghan stood in front of Harry.

When the couple took to the stage in September 2021, for Global Citizen Live in New York City, Meghan was photographed standing slightly in front of Harry again. 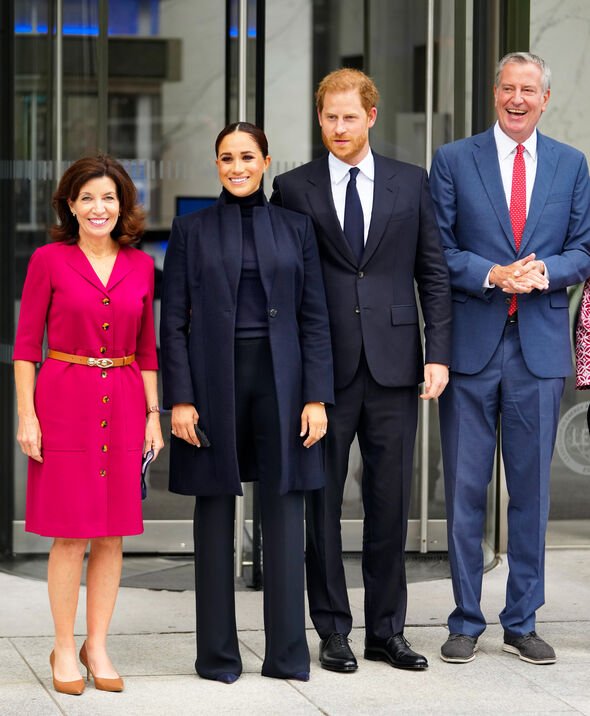 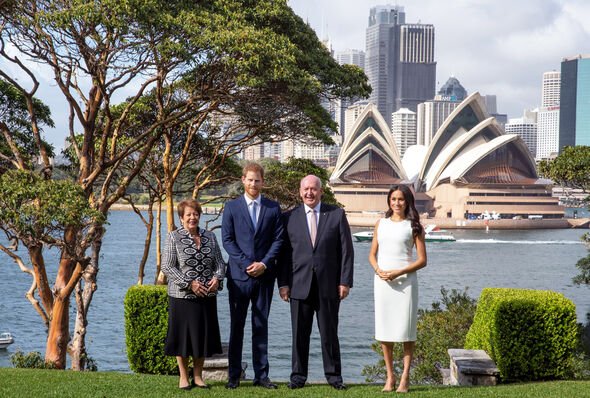 During that same trip, the couple visited the One World Observatory, and when posing for several group photos, everyone else was shoulder to shoulder but the Duchess, stood forward with Harry behind her.

Jesús then spoke about another, older image and how Meghan was positioned within the group.

It was back in 2018 when the royal couple were visiting Australia.

While Harry, Peter and Lynne all stood close to one another, Meghan who was positioned on the right, stood a foot away.

“Our Duchess is standing in a way that wants to be highlighted by the space between herself and the other man,” the body language expert said.

Jesús then suggested Meghan’s position draws “focus on herself” and how this image had “similarities with the UN picture” taken earlier this week.

Jesús claimed that by Meghan “intentionally” positioning herself in front of others, or creating space between herself and a group, she can be “in the spotlight”.

The YouTuber also went onto note how “Meghan is able to pinpoint paparazzi or cameras” when in public.

He referred to the picture of Meghan stepping out with Gloria Steinem following a lunch together after the UN speech.

Jesús Enrique Rosas is a Body Language expert and Persuasion consultant. He has written several books, and conducts masterclasses in body language analysis for Knesix Insitute.